Eco-Health symposium to put focus on collective learning, transformational change and health for all

As the ramifications of environmental destruction and climate change become ever-more evident, it is clear that transformational change is needed if there is to be a healthy future for the planet and all who dwell upon it.

The role of collective learning in achieving transformational social change will be up for discussion at a three-day eco-health conference starting in Melbourne tomorrow.

The event aims to provide “four contributions to the future of Australasian civil society”:

Journalist Marie McInerney will cover the symposium for the Croakey Conference Reporting Service, and in the article below, she asks Professor Valerie Brown about her new book.

“The answer to every question is ‘transformative social change’” 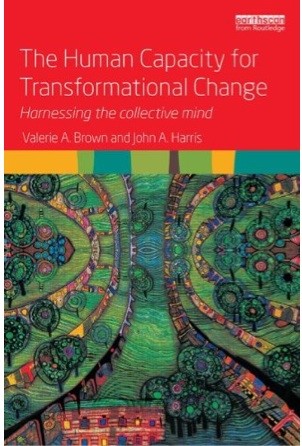 Professor Valerie Brown says researching her new book on collective thinking and learning, co-written with long-time colleague Dr John Harris, was like “tearing down a curtain”.

She says it revealed the role that “the collective mind” has played in human transformation to date and how much it is in action today in a variety of fields: from Darwin’s work on evolution through to one of the most-watched battles of the recent federal election, the seat of Indy.

The book – ‘The Human Capacity for Transformational Change: Harnessing the collective mind’ –  works on the definition that:

“A collective mind draws on evidence from all ways of thinking: personal, physical, social, ethical, aesthetic, sympathetic, and reflective; both alone and in concert with others.”

Its practical examples of a new generation of thinking and Brown’s work and influence over many decades will be a major focus of the inaugural Oceania EcoHealth Symposium and Workshop: Linking Peoples, Landscapes, Health and Wellbeing.

Brown, a Visiting Professor at the Australian National University, has been Director of the Local Sustainability Project at the Fenner School of Environment and Society since 2002 and is an international authority on collective learning as a tool for transformational change.

She described her professional journey in a recent article – A new Enlightenment – in the Griffith Review, saying that her 1960s training as a scientist was “caught up in the triumphal stage of the Enlightenment era. A search for certainty and the banishment of ignorance was the litany of the time.”

Her later questioning of that model led to her doctoral conclusion that while universities expressed the aim of addressing complex issues as a whole, “in practice they remained strongly partitioned along disciplinary lines” and that “every significant socio-biological issue raised six different types of questions: empirical, social, aesthetic, ethical, introspective and reflective.”

The theory wasn’t warmly received by her vice-chancellor, who charged her with “trying to demolish the university bit by bit” but, she said, others saw the validity of her findings.

She was invited to design a science degree in public health and to join the national research bodies of the CSIRO (1986-2004) and the National Health and Medical Research Council (NHMRC) (1984-92). In 1999 she was awarded the Order of Australia for national and international research, policy development, and advocacy for sustainable development.

This latest book further develops her doctoral thesis and was written as she conducted more than 300 collective learning workshops across Australia and in Nepal, Europe, Malaysia, Fiji and China.

Looking at collective thinking at the individual, social and global levels, it says the multiple ways of understanding are accessed through asking a full suite of questions:

·         Introspective: What is my own position in this topic?
·         Biophysical: What can be reliably observed, described and measured?
·         Social: What patterns, celebrations and symbols interpret the society?
·         Ethical: What principles guide collective personal and group decisions?
·         Aesthetic: What appeals to the senses as being inspirational and creative?
·         Sympathetic: Is there sympathetic understanding among key interests?
·         Reflective: What is the meaning of all this? Reflecting on the answers to all of the questions.

They’re questions that, she says, we often instinctively apply in our personal decision-making. But we pay most of them no heed, or consciously reject them, when it comes to our work in the wider world, where an “analytic rationality monopoly” prevails.

She says: “Look at health: the whole of health (care) has been moved to individual, mechanical, surgical intervention. If you believe that every individual is also a product of and contributes to their society, you can’t get away with that.”

But once she and co-author Harris went looking for the collective mind in action, she said they were excited to “find it everywhere”, and not only in the work of “master thinkers” like Charles Darwin, James Lovelock, Norbert Weiner, and Pierre Teilhard de Chardin.

It’s also to be seen in collective social structures that are “thriving” in various parts of the world, such as micro finance projects and other initiatives based on the work of Nobel Prize-winning economist Elinor Rostrum and through the worldwide Transition Towns movement.

Australia is contributing much, she says, through the award-winning work on Indigeneity by symposium organiser Kerry Arabena and best-selling author, research scientist and farmer Charles Massey on regenerative agriculture, who will also be speaking at the event.

“We are all a product of our environment”

“Kerry takes an almost unique position which I think we could all share, that ‘we are all indigenous, we are all a product of our environment and we share almost everything’,” Brown says.

Massy is author of Breaking the Sheep’s Back, which was shortlisted for the 2013 Prime Minister’s Literary Award and will speak at the symposium on the Australian Alliance for Regenerative Landscape and Social Health Transformational Farmers, who farm in sympathy with Aboriginal lessons from the past and with organic agriculture, while using all modern techniques.

“Kerry, Charlie and I will be discussing the application of these ideas in health, land management, and everyday practice,” she said.

And, Brown says, the principles of the collective mind were “easily” observed in the recent federal election campaign by independent Cathy McGowan – another former student of Brown’s – which unseated high profile Liberal Sophie Mirabella.

“It’s all about involving everybody without prejudice, about not taking a position but opening up to all the interested positions, about not polarising yourself in a party but crossing all parties, and using an inclusive language: respecting every position.”

Where we are still not seeing it in action, she says, is in debates over some of the ‘wicked problems’ we face: the obesity epidemic, urban violence, the loss of biodiversity and, most notably, climate change. She likens them to a lizard which escapes detection by dropping his tail.

“Climate change is the tail. It’s only a symptom, an outcome and we spend all our time on it,” she says, acknowledging she doesn’t win friends on this one.

• You can track Croakey’s coverage of the symposium here.