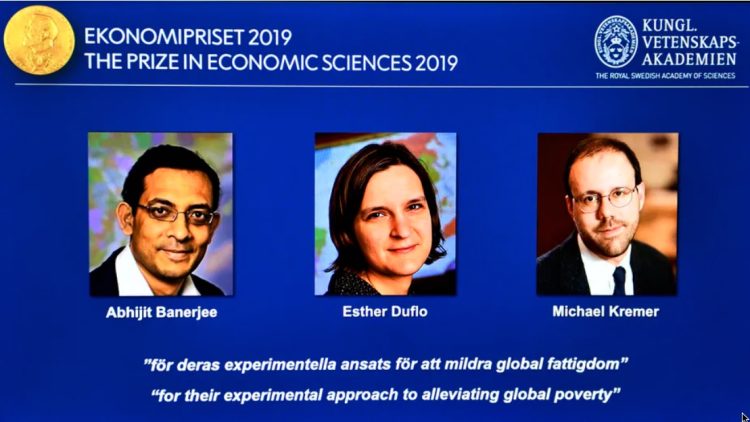 Image via The Conversation

Introduction by Croakey: When the Swedish chemist, engineer, and industrialist Alfred Nobel signed his last will and testament in 1895, a Prize for Public Health was not among the prizes he established.

Instead, there are Nobel prizes for Physics, Chemistry, Physiology or Medicine, Literature and Peace, with Sweden’s central bank adding another to the list in 1968: The Sveriges Riksbank Prize in Economic Sciences in Memory of Alfred Nobel.

Perhaps it could be argued that one way or another, all of the Nobel Prizes could potentially be awards recognising public health achievement, given that the field includes so many disciplines, including economics.

Indeed, the three winners of this year’s economic prize, recognised for their work in alleviating global poverty, have made many contributions to public health, including research showing that poor people’s investment in preventive care is very sensitive to the prices of health products or services, giving a strong argument for generous subsidies to such investments (read more in these long and short summaries of their work).

The image below summarises some of their research showing that better service availability and stronger incentives improved vaccination rates.

The Nobel Prize website notes that around five million children under the age of five still die of diseases that could often have been prevented or cured with inexpensive treatments. Half of the world’s children still leave school without basic literacy and numeracy skills.

How appropriate that the prize should be announced during Anti-Poverty Week, which in Australia is putting the focus on wide-ranging arguments for increasing the Newstart payment, in the lead up to the United Nations Day for the Eradication of Poverty on 17 October.

It’s also a week in which the Australian Government is doing everything possible to avoid mentioning the word “poverty”, judging by the Government’s talking points that were accidentally released on Monday.

The Sveriges Riksbank Prize in Economic Sciences in Memory of Alfred Nobel 2019 (commonly known as the Nobel Prize for Economics) has been awarded to Abhijit Banerjee, Esther Duflo and Michael Kremer “for their experimental approach to alleviating global poverty”. Through the award, the Nobel committee recognised both the significance of development economics in the world today and the innovative approaches developed by these three economists.

Global poverty continues to be a massive challenge. The award follows Angus Deaton, who received it in 2015 for his contributions to development economics – the field that studies the causes of global poverty and how best to combat it – particularly, his emphasis on people’s consumption choices and the measurement of well-being, especially the well-being of the poor.

Well-developed theory can highlight what causes poverty and, based on this, suggest policies to combat it. But it cannot tell us exactly how powerful specific policy measures will be in practice. This is precisely where the contributions of Banerjee, Duflo and Kremer lie. The Nobel citation gives several examples of their impact, including how their research has helped education, health and access to credit for many in the developing world, most famously in India and Kenya.

Consider, for example, child mortality and health – issues of immense significance in the developing world. Theory can tell us that women’s empowerment is important for child health and mortality outcomes, but cannot tell us which policy will be most effective in combating this. It could be a focus on educating mothers, or access to healthcare, or electoral representation, or marital age legislation.

Perhaps, more importantly, theory cannot tell us how large and significant the impact will be of these various policies. And this is where the significance of the Nobel Prize this year comes in.

The fundamental contribution of Banerjee, Duflo and Kremer was to develop an experimental approach to development economics. They built a scientific framework and used hard data to identify causes of poverty, estimate the effects of different policies and then evaluate their cost effectiveness. Specifically, they developed randomised control trials (RCTs) to do this. They used these to study different policies in action and to promote those that were most effective.

Starting in the mid-1990s, Kremer and co-authors started a series of RCTs on schooling in Kenya, designing field experiments to evaluate the impact of specific policies on improving outcomes. This approach was revolutionary. The experiments showed that neither more textbooks nor free school meals made any real difference to learning outcomes. Instead, it was the way that teaching was carried out that was the biggest factor. 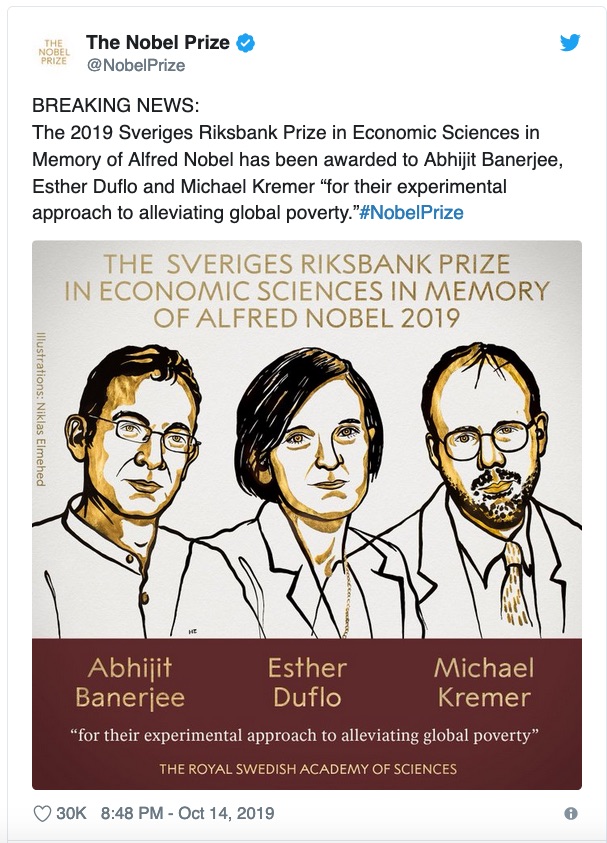 Studies by Banerjee and Duflo, often together with Kremer and others, followed. They initially focused on education, and then expanded into other areas, including health, credit and agriculture.

Banerjee and Duflo were able to use these studies to explain why some businesses and people in less developed countries do not take advantage of the best available technologies. They highlighted the significance of market imperfections and government failures. By devising policies to specifically address the root of problems, they have helped make possible real contributions to alleviating poverty in these countries.

Banerjee, Duflo and Kremer also took significant steps towards applying specific findings to different contexts. This brought economic theories of incentives closer to direct application, fundamentally transforming the practice of development economics, by using practical, verifiable and quantitative knowledge to isolate causes of poverty and to devise adequate policy based on behavioural responses.

The impact of these developments upon real world development outcomes are immensely significant. Their work, and substantial amounts of research that followed it, established evidence on fighting poverty in many developing countries. And they are continuously expanding their horizon of contributions, which now also includes climate and environmental policy, social networks and cognitive science.

The 2019 Nobel Prize for Economics is also significant for reasons of inclusivity. The impact generated by Banerjee, Duflo and Kremer’s approach has come about very quickly – actually, in less than two decades. This explains why, at the age of 47, Duflo is the youngest-ever recipient of the economics Nobel. She is also only the second woman to be awarded the prize (after Elinor Ostrom in 2009). Banerjee, who is also her husband, is the third ever non-white recipient (after Arthur Lewis in 1979 and Amartya Sen in 1998).

In a recent issue of the journal Nature, Göran Hansson, head of the Royal Swedish Academy of Sciences that awards the Nobel, highlighted measures to address the imbalance in gender and ethnicity among winners. He said “we are making sure to elect women to the academy” from which the prize-awarding committees for the chemistry, physics and economics Nobels are drawn.

The pipeline to this achievement is important. The first woman to win the John Bates Clark Medal for top economists under 40, an important indicator of who will be awarded the economics Nobel in the future, Susan Athey, only did so in 2007. Esther Duflo was the second winner in 2010. Since then, women winners of the Clark medal have been more frequent. Of course, award decisions are made strictly on significance of contributions. But, based on this evidence, perhaps Athey, Amy Finkelstein (who won the medal in 2012) and Emi Nakamura (who won it in 2019) will not be far behind.

• Arnab Bhattacharjee and Mark Schaffer are Professors of Economics, Heriot-Watt University in the UK.