The trial in Norway of Anders Behring Breivik for the murder of 77 people is generating some useful reflection about the role of media at times like this, and what can be done to minimise the suffering of those exposed to related coverage.

If you’ve been following the tweets of Trygve Sorvaag (see a selection at the bottom of this post), a Norwegian freelance journalist usually based in London who has been commenting for Sky News, you will get some idea of the traumatic impact of the trial, including upon those in the court room.

In the article below, Marie McInerney, a journalist who produces the VCOSS magazine Insight, suggests there may be some wider lessons from the trial for those with a broader concern for the impact of media reporting upon vulnerable people and groups.

Her piece draws on an interesting article by RMIT lecturer Alexandra Wake profiling some innovative uses of digital technology by media outlets, to give audiences some control over their exposure to reporting of the case.

And at the bottom of the post is an extract from a Norwegian initiative with some feedback for the media from children affected by the shootings.

‘Anyone here been raped and speak English?’

‘Anyone here been raped and speak English?’ It’s the infamous cry of the war reporter, and points to the impact the media can have on victims of war and other disasters, exacerbating trauma even as they seek to represent or highlight (at best) or exploit (at worst) those experiences.

How to support and protect those who are thrust by trauma into the spotlight is complicated. For many in the community sector, the instinct is to block access.

But that, of course, is not always possible (see Why I’ll never get used to death knocks by Nine Network reporter Sarah Harris). It may also not always be desirable.

Denis Muller and Michael Gawenda from Melbourne University’s Centre for Advanced Journalism looked at this ‘complex and ethically fraught interaction’ between the survivors of a disaster and media covering it in the aftermath of the 2009 Victorian Bushfires. Their results were detailed in Black Saturday: In the Media Spotlight.

See also Denis’ article for VCOSS’s Insight magazine and some concerns raised by Cait McMahon from the Dart Centre for Journalism and Trauma.

Now the trial in Oslo of Norwegian Anders Behring Breivik for the murder of 77 people has prompted a new focus on the impact of reporting on mass violence and in providing an international soapbox for extremist views. RMIT lecturer and former Dart Centre academic fellow Alexandra Wake explores the issues in Terror on trial: should Anders Breivik’s views be heard? at The Conversation.

There are a number of issues newsrooms here will be considering. Should we broadcast or publish the five-week trial? If it is broadcast or printed, how can we do so responsibly? And is there any advantage to be gained from putting his extreme views on the public agenda for debate? Should journalists be publishing, broadcasting, tweeting and live blogging the trial?

She points to some interesting responses: the decision by The Guardian to ensure that Breivik’s extreme statements are ‘corrected’ in its online reporting, and the ‘opt out’ choice given to readers of the Dagbladet, one of Norway’s major newspapers, which has set up a version of its website with a button that removes any mention of the trial.

Freelance reporter Trygve Sorvaag also tweeted a simple – and hopefully effective – way that Breivik’s victims and families have adopted to ask the media (yes, in English!) to leave them alone. 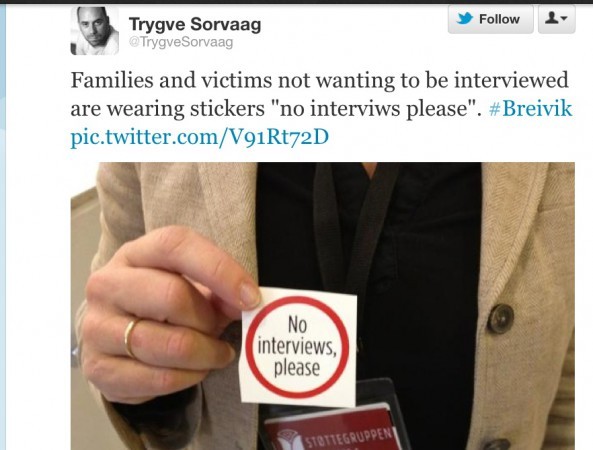 Some more tweets from Trygve Sorvaag 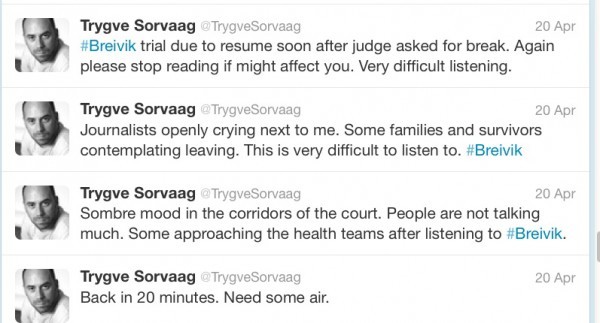 • This overview from a UK journalism site of the ethical issues facing journalists reporting on the trial largely examines the potential pitfalls of live-tweeting from the court.

• According to this media statement, the Norwegian Ombudsman for Children has established an expert group of young survivors that includes children and young people from different parts of Norway. They have discussed several issues related to the aftermath of the massacre, including how the media has been handling the situation.

• Declaration: Melissa Sweet has an ongoing association with the Dart Centre Asia Pacific.