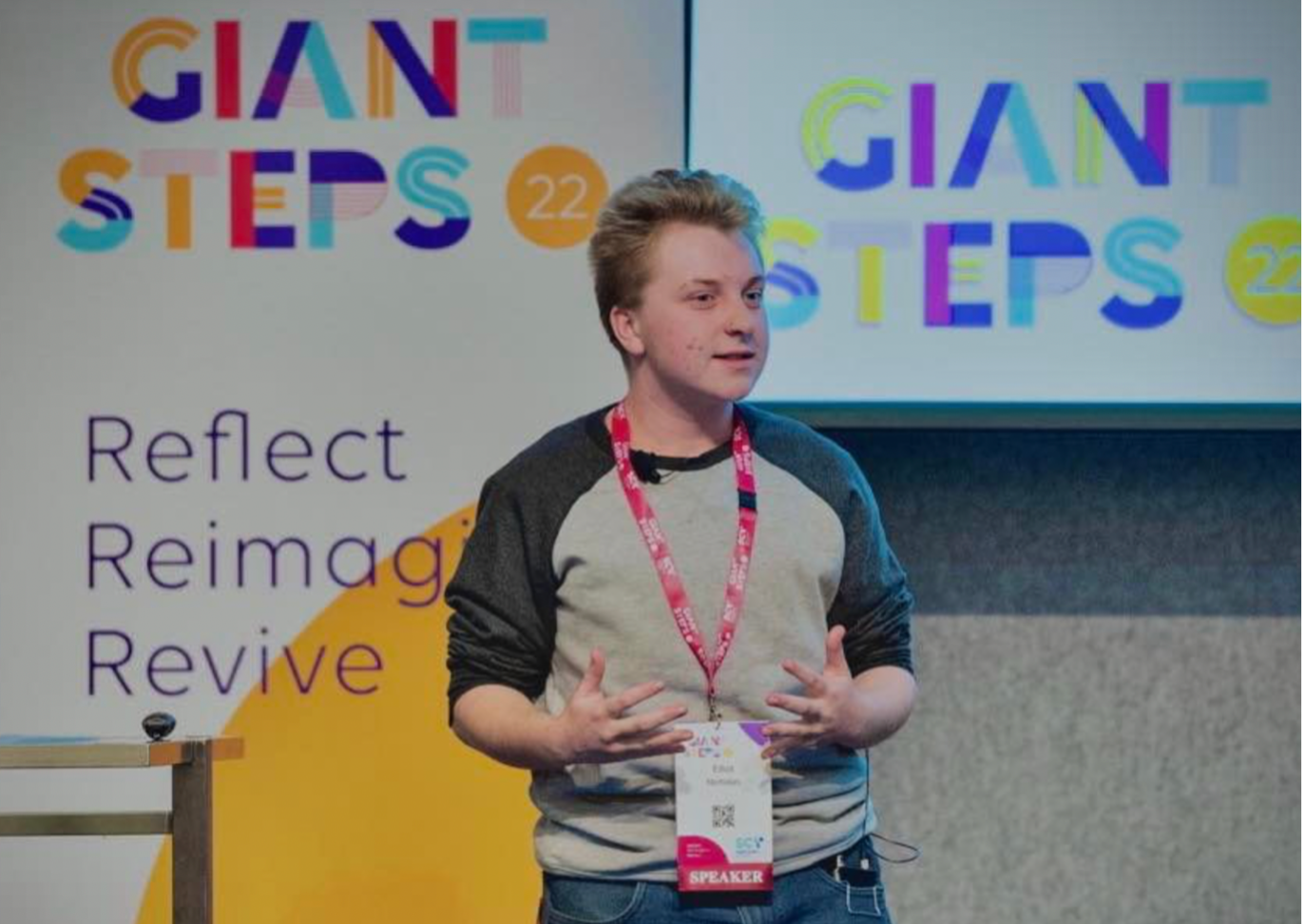 Introduction by Croakey: Family support, courage, purpose and authenticity were strong messages presented at the Giant Steps 2022 conference hosted by Safer Care Victoria in May.

One presenter was Elliot Nicholas, a young transgender male who spoke about life-saving support from his family and his experience with gender dysphoria and struggles with his mental health.

Based on that presentation, Nicholas writes below about his experience with gender transition and why he is so “enthusiastic about raising awareness and advocating for transgender rights”.

“I want to share how important it is that young people everywhere who are born this way, are not born “mistakes” or born “wrong”,” he writes.

For those who didn’t attend the Giant Steps Conference, hello, my name is Elliot Nicholas. I was 18 at the time of the conference but have turned 19 since then.

Something else that is arguably as important is: why was I there?

I could give you the short and simple answer, I am a young transgender male who – with the help of the Royal Children’s Hospital’s Gender Clinic – successfully began my transition on gender affirming hormone treatment.

I was personally invited to speak about the future progressions of diagnosing and helping gender diverse youth across Victoria and hopefully, Australia, but hey – I won’t get too ambitious just yet.

But I’m not here to give you that short and easy answer, I’m here to tell you why I’m here and how I came to be here. To get to know me a little more so this article doesn’t feel so copy-and-pasted, I’m 19 and currently work as a part-time peer mentor to help people with disabilities enjoy their independence.

I have a beautiful four year old beagle named Winchester, I can play seven different musical instruments, my favourite colour is red, my Myers-Briggs personality is INFJ (introversion, intuitive, feeling, judging) and my zodiac sign is Cancer.

So now that you know a little more about me, let me move on to how I came to be so enthusiastic about raising awareness and advocating for transgender rights.

I have always had a feeling of gender dysphoria in the back of my mind when I was a child, it never occurred to me how important it was until I started noticing this fun little aspect of society known as “gender stereotypes”.

I was young – around seven or eight as a rough estimate – when I still had that androgynous figure and you really wouldn’t have been able to tell if I actually was a girl or a boy. It became more known to me that I was “different” from others when my wonderful life cycle hit puberty.

My mental health started to plummet. I felt stuck and unable to change. As if there was no other way than to just move on and hope it went away.

Life update: it doesn’t. I’m not the only one and I never have been the only one, which is why I said yes to speak about this to all of you.

I want to share how important it is that young people everywhere who are born this way, are not born “mistakes” or born “wrong”. And that in some cases – as upsetting as it is to hear – it can mean the difference between life and death for most young people who identify as gender diverse. I know it did for me.

Having said that, my story is very much unique. I am a middle child of five and my parents are both Christian ministers of the Uniting Church. My most common response when acquaintances hear that statement is “oh really, how did they take your transition?” or “That must have been really hard for you.”

But in actual fact, the church and congregation are very different to what you would expect the stereotypical “Christian” to be, especially with the horrible news of Roe v Wade being overturned. It is a whole can of worms that involves the very old fashioned saying “don’t judge a book by its cover.”

I couldn’t have asked for a better family, or friends, or school for that fact. Of course, it had its ups and downs but that is life and it eventually comes to pass as most things do. So when I did eventually come out to my family, I was well received and proceeded to come out to my school.

Fast forward a few years later and I had made it to my last year, I became school captain and graduated as valedictorian of my year level with academic achievements in music and history.

But more importantly, I had successfully started my transition with gender affirming hormones.

My insight into the personal life of a young transgender male became an important part of my desire to want to show others the meaning and importance of an educated and supportive medical system.

Transgender medicine has come a long way – treatments have improved and surgeries that were once considered impossible are now possible.

However, regardless of this evolution in medicine, some areas of the medical system are still sadly lacking understanding and empathy towards people experiencing gender dysphoria. Sadly this can cause people to dread health professionals as they can cause emotional distress over something so delicate and uneducated as transgenderism and transsexuality.

I wish I could go into more depth about my life and the events that led me to be the person I am today.

But if you would like to see my work in other places, I was involved in an ABC television Australian Story program, in two different conferences and I will be speaking at a teaching event for medical staff improvements.

Life goes on and I will continue to go onwards and upwards.

But I hope you enjoyed reading this story, as there are many others just like me.

*Bookmark this link to see all our conference coverage from #GiantSteps22.