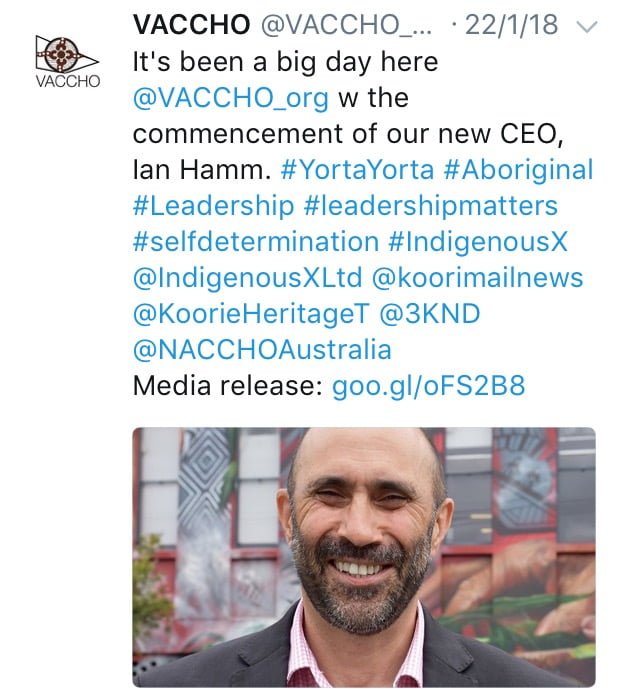 Embracing the momentum: five priorities for Aboriginal health and wellbeing from the new VACCHO CEO

The Victorian Aboriginal Community Controlled Health Organisation has appointed Ian Hamm as its CEO, with Jill Gallagher AO stepping away to take up her role as Victorian Treaty Advancement Commissioner.

Hamm is a Yorta Yorta man with more than 30 years’ experience working in the public service, including as executive director of Aboriginal Affairs Victoria. In the post below, he notes that he has taken on the role at a time of great momentum, with a number of important initiatives afoot, that have the potential to improve Aboriginal health and wellbeing.

He is positive, strengths-based, and relentlessly future-focussed as he shares five priorities for his time in the job.

After working in government for more than 30 years, I’ve just taken on the role of CEO of the Victorian Aboriginal Community Controlled Health Organisation (VACCHO) for 18 months. I can’t think of a more thrilling time to do so.

The debate about Australia Day over the past few weeks has reminded us all that the notion of health and wellbeing for Aboriginal people extends way beyond a siloed medical definition.

In recent months we’ve had the exciting appointment of Jill Gallagher as Victorian Treaty Advancement Commissioner, the first role of its kind in Australia, while simultaneously getting the Closing the Gap refresh underway with the Federal Government, and the Victorian Aboriginal Affairs Framework review. All these initiatives demonstrate the breadth material that is before us for consideration.

As I look forward to embracing this positive momentum, I see five major priorities on the horizon for Aboriginal health and wellbeing while I am in my new role.

Seeing a holistic approach to Aboriginal health and wellbeing adopted across government and more broadly.

Health is more than just the traditional notions of health, of physical and mental wellbeing. The broader concept of health encompasses the whole of a person’s life and all the things that impact on it.

You can’t Close the Gap in life expectancy and other health measures without addressing the basics of life, such as acceptable housing and economic participation. Looking at all facets of what entails a healthy life is essential to ensuring Aboriginal people live longer, healthier lives.

We’re making gains in some areas, but given our starting point and the road we’ve come along, things won’t change quickly. It will take a substantial amount of time for us to get to what I’d call meaningful equity.

There is a lot happening in the area of treaty and self-determination, particularly in Victoria. I am hopeful that reaching a treaty with Aboriginal Victorians will lead the way for other treaties at state and national levels. A treaty (among other things) will give our people a voice. We will be heard, and that will bring empowerment.

We are also working with the Victorian Government to bring the broader concept of self-determination to life. This means considering it an individual level, a community level and an organisational level.  It’s a challenge, but one to which I am sure we can all rise.

Breaking down the systems and institutional racism that reduce access to mainstream services.

Aboriginal people still encounter racism and bias across many aspects of life, including sometimes in accessing health services and other institutions. Some staff at some services, upon learning a client or patient is Aboriginal, assume stereotypes. This can lead to misdiagnoses, limiting of access to services, and other negative outcomes.

As an example, there are VACCHO staff who can cite instances where the negative assumptions made about them or their relatives have led to incorrect diagnoses or treatment. These negative experiences can discourage Aboriginal people from identifying as Aboriginal when dealing with these services, which in itself can lead to poor outcomes. When Aboriginal people do not identify as being Aboriginal it also distorts health records and statistics, causing problems with obtaining funding where it is needed.

At VACCHO we teach Cultural Safety to help overcome some of this bias, to improve understanding, and to help make interactions more positive for both Aboriginal people and the non-Aboriginal people providing services to them.

The Aboriginal organisational service sector has been the single most important factor in any gains in Aboriginal life outcomes over the past 40 years.  Put simply, without it, we would barely have moved beyond the gains of 1967.  It is an absolute imperative that the Aboriginal community service sector continue to be the centrepiece for delivery of services to our community if we are to see further progress over the next 40 years.

But it is not only in the delivery of services that community-controlled organisations play a critical role. These organisations need to be involved in the policy-making, design and development of these services if they are to be truly successful.

To this end, VACCHO is specifically focussing on supporting our members develop their capacity and capability, not only to be part of the policy environment, but to lead it. This reflects the evolving role of community organisations, and the greater responsibility they have in an increasingly complex policy environment.

Taking a long-term approach to Aboriginal health and wellbeing.

If we want to make real, lasting change in achieving equity for Aboriginal people, we need to look beyond fixing the problems we have now. By focusing just on the now, you never get ahead. I’ve always thought we need to think generationally.

I want us to look forward 20 years, to a Victoria where Aboriginal people have equity on most of the things we measure, and work to get to that point.

That also means changing government thinking and ensuring that funding is delivered in a stable, long-term way, so that we see real shifts in outcomes for our people.

We have a big job ahead of us but I think there is momentum and will to get there, from the community and from both state and federal governments. Together we can Close the Gap and create a healthier, happier future for Aboriginal people and the broader community.

*Ian Hamm will hold the role of CEO of the Victorian Aboriginal Community Controlled Health organization for the next 18 months, during Jill Gallagher AO’s leave of absence as she steps into the role of Victorian Treaty Advancement Commissioner

PrevPreviousAs Medicare turns 34, here’s a blueprint for the next steps in health
NextAustralia’s 2017 carbon emission projections – yet more spin and red herrings from the Australian governmentNext