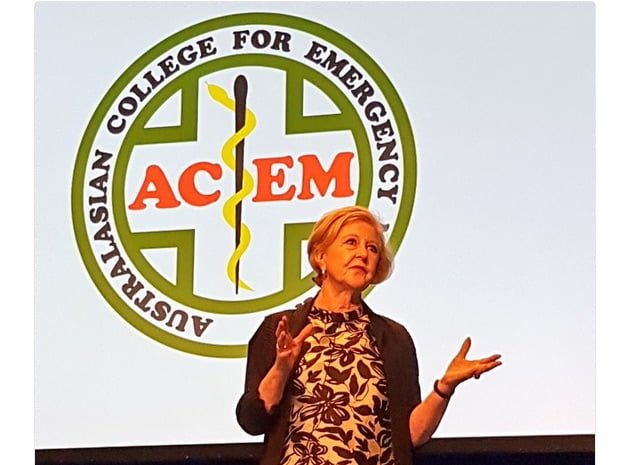 Her calls for health professionals to speak up and advocate for human rights and health rights were timely, as the situation on Manus Island grows ever more dire, pressure mounts for national youth justice reform, and further evidence emerges of the detrimental health impacts for LGBTI people of the marriage equality survey process.

Journalist Amy Coopes is covering the ACEM conference this week for the Croakey Conference News Service – follow the discussions on Twitter at #ACEM17.

Also watch this interview with Triggs, where she describes the marriage equality survey as a “painful and inappropriate process”, although the results were an “outstanding success for participatory democracy”. 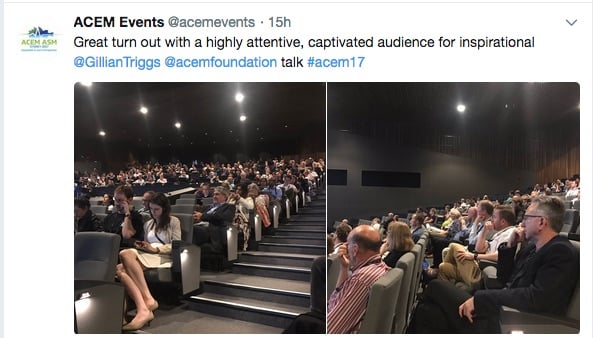 In a post-truth world of alternative facts and ideologies, health care workers are more obliged than ever to speak loudly for what they believe in and know to be true, Professor Gillian Triggs told a medical conference in Sydney on Monday, describing health as a fundamental human right. 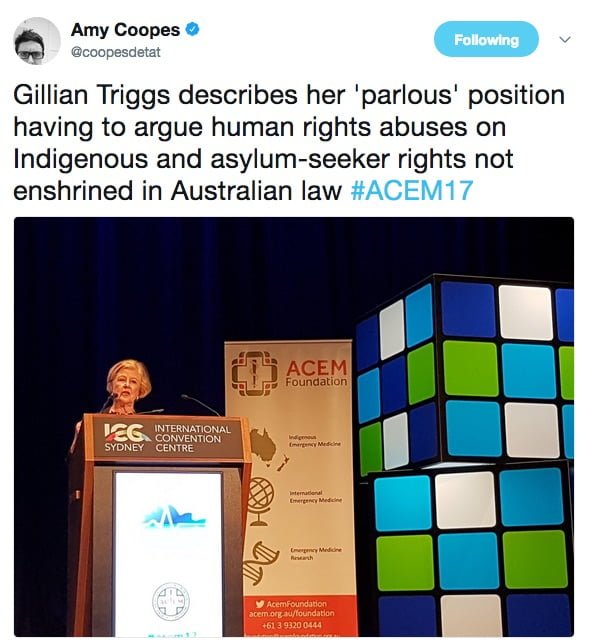 Triggs, former president of the Australian Human Rights Commission, received a standing ovation for her keynote address Health Care for Australia’s Vulnerable Populations: How can we do better at the 34th Annual Scientific Meeting of the Australasian College for Emergency Medicine.

Traversing considerable terrain, ranging from the Northern Territory Intervention to Children Overboard, Manus Island and marriage equality, Triggs said the credibility and frontline experience of doctors made them essential allies in the human rights movement.

Understanding health as a “fundamental part of human rights and the right to a life in dignity” was important because it underscored its connection to social justice and to functional democracy, she said.

International law understood health, not just the absence of disease, but as complete physical, mental and social wellbeing – an ideal that Triggs said we were falling short on for too many vulnerable groups including Indigenous people, rural and remote communities, the elderly and those who were uninsured or disconnected from the system.

Truly universal care would encompass much more than the medical needs of our most disadvantaged groups, and also recognise the many and varied determinants of wellbeing including, housing, employment and legal security.

“We might have a better opportunity at social cohesion were we all able to access our universal right to health,” said Triggs.

Triggs said the tragedy of Australia’s “isolationist and exceptionalist” stance on human rights was that health, and many other essential human freedoms, were not enshrined in or protected by domestic law.

Australia existed in the world’s only region without a human rights treaty and, quite simply, didn’t speak the language, Triggs said.

In the era of H.V. ‘Doc’ Evatt, Triggs said Australia had once been a leader in international human rights law, but was now the world’s only democracy without a Bill of Rights and had ratified just three global instruments into domestic law – the international conventions on elimination of racial discrimination, discrimination against women, and on the rights of persons with disabilities. The rights of the child were a notable omission.

As Human Rights Commission president, Triggs said that left her in the “parlous” situation of having to protest human rights abuses to the Australian government that, as far as they were concerned, were not defined as thus under domestic law.

It was with some irony that Triggs noted that the fiercest opponents of Australia recognising its international human rights obligations were suddenly scrambling for protection of religious freedom under the International Covenant on Civil and Political Rights in the marriage equality debate – a “muddled” situation.

This was a strawman given Australia’s constitution already enshrined protections for religion, said Triggs, adding that “this government does not support fundamental human rights principles except when they want to placate” the conservative flank of their own party.

Triggs stressed the importance of language in rights debates, recalling the 2001 Children Overboard scandal for which, ultimately, “not a shred of evidence” was found.

“It didn’t matter, the damage was done. The language was there,” said Triggs, noting a similar effect from stunts like Pauline Hanson’s recent entrance to the Senate wearing a burqa. “These are ways of demeaning people.”

She admitted being “astonished” by the “shocking” derision with which the government spoke about asylum-seekers and said her own experiences visiting detainees in Australian facilities in the Pacific had illustrated for her that we cannot, and must not, turn our backs on the most vulnerable.

Delegates erupted into applause when Triggs said the International Criminal Court was considering bringing a case against Australian government ministers for crimes against humanity over their punitive asylum-seeker policies, and there were cries of ‘shame’ when she pointed out that the billions spent on offshore detention had come from the country’s humanitarian budget.

Rather than denouncing Australia’s ascension to the UN Human Rights Council – not an election, she noted, as it was a dead rubber with two countries running for two vacant seats – Triggs said she viewed it as a good thing.

“It’s an opportunity for us to persuade but also be persuaded to meet the standards we’ve signed up to,’ she said.

There were moments of levity, as she lamented her lack of coordination evidenced in the preceding dance break for delegates and said she preferred not to be introduced as Emeritus Professor because in Latin emeritus meant “has-been – and I’m not done yet.”

Triggs paid tribute to the doctors she had worked alongside gathering evidence and testimony from offshore detainees, saying they brought a credibility to the process and the findings.

She said we were living through a very difficult period in our history where advocacy – even and especially for risk-averse people like doctors – was more important than ever before.

In the face of a growing tolerance for alternative facts and ideologies, and a rejection of evidence-based inquiries and reports, Triggs said it was imperative that “as professionals with full knowledge of the facts, we need to stand up for what we know to be right.”

“My view now is that have we have a clear obligation to push back and to get the facts on the record, even if it attracts a certain degree of public opprobrium,” she said. 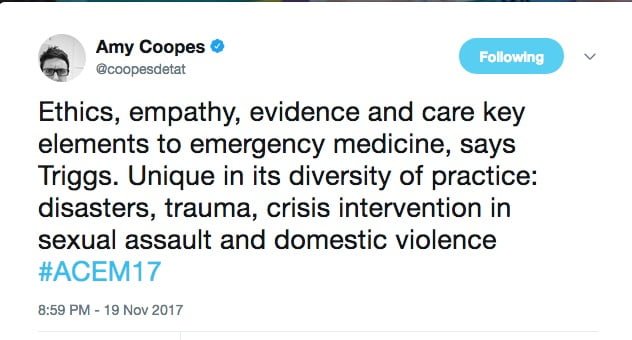 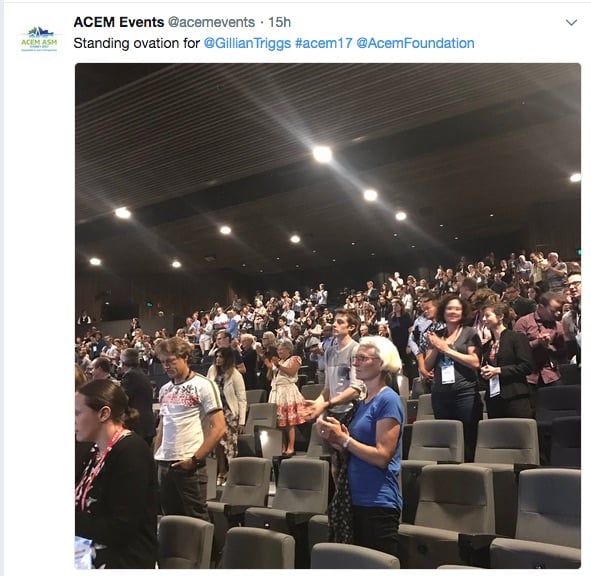 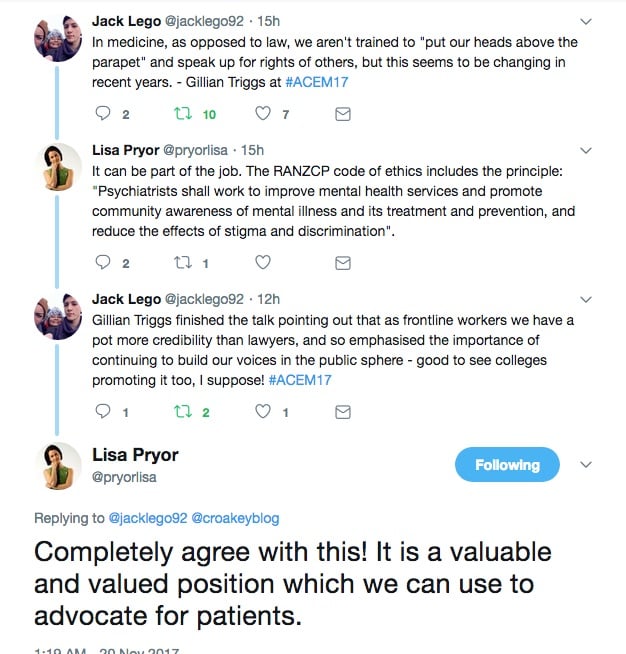