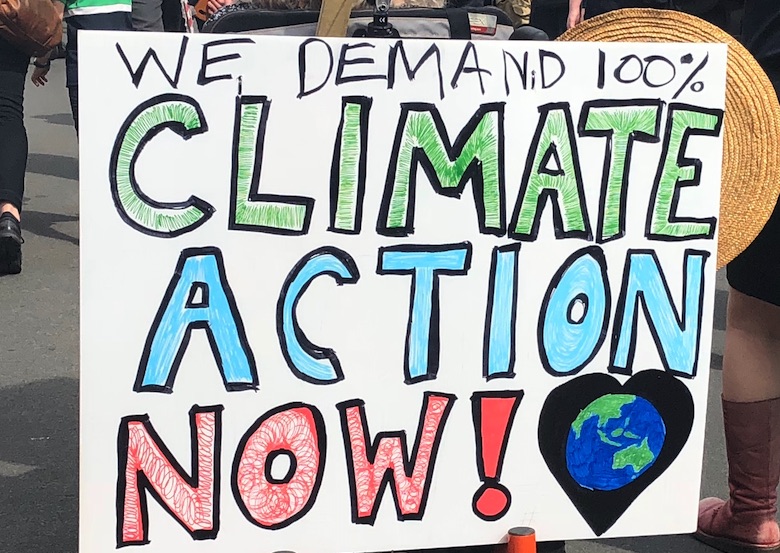 Emergency medicine doctors at forefront of climate action and advocacy

Climate change and its impact on health and health systems will be front and centre of this year’s annual summit of Australian and New Zealand emergency doctors in nipaluna/Hobart, with a focus on activism and advocacy in medicine.

Themed ‘The Changing Climate of Emergency Medicine’, the 2019 annual scientific meeting of the Australasian College for Emergency Medicine (ACEM) will confront the climate emergency head-on, offering keynotes, plenary sessions and papers on topics ranging from warming oceans and intensifying bushfires to mental health and public health perspectives and the contributions of hospital waste.

Former Greens leader, Dr Bob Brown, who was a medical doctor in his pre-political life, will make the case for climate advocacy in medicine when he delivers the flagship ACEM Foundation Lecture.

The conference will be opened by Caitlin Ross, a Year 10 student at Hobart’s Taroona High School and local organiser of the global #FridaysForFuture school strikes movement inspired by Greta Thunberg.

Stand and be counted

Delegates will also hold a climate emergency march, in stethoscope and scrubs, from Royal Hobart Hospital to the conference venue on Thursday morning to raise awareness of the issue, with conference convenor Associate Professor Geoff Couser saying it was time for doctors to stand and be counted.

“I wanted to introduce a real element of advocacy and activism, because I think you can’t not be political these days,” Couser told Croakey.

“It’s just not enough to simply have a bunch of people sitting around listening to speakers, you’ve got to really do a bit better than that.”

In September, the Australian Medical Association joined a raft of other health groups globally in declaring a climate emergency, upping pressure on the Australian Government to take action in a number of areas.

Couser said emergency medicine, as a profession, needed to a take “a good, long hard look at ourselves” and consider whether, as a group and at a systems level, it was ready for the impacts of climate change and knew “what we’re going to do, and how we are going to respond”.

“But secondly, given that we know what we know, we’ve got to get involved in dealing with it. We can’t just sit back and let it happen,” he said.

Rather than an abstract future hazard, Couser said the impacts of climate change were already being felt in Australia, pointing to water shortages in Armidale and unseasonably early bushfires in Queensland’s drought-affected cool climate country.

Hospital evacuations in fire-stricken California showed such events were a very real threat to health infrastructure, he added.

The climate theme recurs throughout the meeting, but the major session will be held on Thursday morning following the protest march, with keynote speakers to include:

Couser said he expected Taufilo’s talk would be powerful: “It’s not just a vague concept for her, it’s an existential crisis.”

The event is fully carbon offset, with the price of registration inclusive of carbon credits, and Couser said this would now be standard practice for ACEM events going forward. The menu is also entirely vegetarian, in keeping with The Lancet Planetary Health Diet guidelines.

More so than other medical specialties, Couser said emergency medicine had always been vocal in the advocacy space, which partly reflected the kinds of people attracted to the field – passionate proponents of the public health system with a strong interdisciplinary team ethos.

But it also reflected the field’s unique position at the interface of society, politics and health:

We see the results of inequity, we see the social determinants of health.

We see the people unable to access dental care at 10 o’clock on a Friday night when they’ve got an acute dental emergency because there is no after-hours dental care system in Australia.

Because really when these systems break down in an acute fashion where else do you go, you come to us.

We see it and it’s a lived experience for us.”

In setting the program for this year’s ASM – the 36th in the College’s history – Couser said his emphasis had been seeking perspectives from “outside our own bubble to shine a light on how we do things”.

One of the highlights, he said, would be Dr Fiona Kerr, founder of Adelaide’s NeuroTech Institute and a leader in the fields of social cognitive neuroscience and human connectivity. Kerr will talk about human-centered technologisation and medical problem solving, drawing on some work she has done with the military on ethical decision-making in high pressure situations.

Another highlight would be Berry, some of whose publications can be seen here.

From pill testing to mental health

There will also be workshops on lobbying for success, storytelling, ethics in the emergency department, and a session on app design from BAFTA award-winning tech company Secret Lab, a Hobart-based outfit that has sold products to giants including Google and Apple. They will also present on decision-making using a programming approach.

Politics and violence will be explored in a plenary on Wednesday afternoon reflecting on emergency department experiences of the 1996 Port Arthur massacre in Tasmania, this year’s Easter bombings in Sri Lanka, and the Christchurch shootings in March.

The program also features a screening of Against Our Oath, a documentary that explores ethical conflicts for doctors working in Australian immigration detention on Manus Island and Nauru, followed by a Q&A with filmmaker Heather Kirkpatrick.

David Hilmers, a retired astronaut and chief medical officer of the NGO Hepatitis B Free, will headline a session titled ‘Aerospace Medicine – Emergency Medicine is Out of this World’.

Hilmers served as a NASA astronaut on four space shuttle missions and is a medical doctor who now divides his time between Sydney and Houston, overseeing Hep B Free’s programs in countries including North Korea.

The changing climate of the specialty, and the unique pressures it faces from issues like access block, an ageing population, health system resourcing and policy failings on fronts such as the National Disability Insurance Scheme and mental health, will also be canvassed as part of the theme.

A recent series of articles at Croakey has profiled some of the stresses facing emergency doctors and departments, and these have also featured prominently on the front pages of The Mercury in Hobart.

Resource stewardship and the importance of Choosing Wisely in the ED will be the focus of a number of presentations tackling sustainability in the hospital setting.

Read more of our coverage on this important issue:

Couser said low-value care was “the really big issue that we as a profession have to address in the next few years”, describing the scale of waste in the health system as “morally reprehensible”.

Not just a conference with a difference, Couser wants the ASM to be an ‘unconference’ of sorts, with a push for interaction and engagement, and an intention on the event’s final day to present what will be known as the Hobart Statement.

This will draw on three workshop-style sessions held on each of the conference days with the following themes:

It will also incorporate findings from other sessions throughout the program, with the aim of issuing a declaration of agreed priorities and actions on behalf of delegates to be announced on the final day that will also be published in the journal Emergency Medicine Australasia.

Such an approach is not typical of medical conferences, but Couser said “we want to bring the conversations in the corridors and the exhibition hall at morning tea and lunch into the sessions”.

“We’re going to get 1,000 people together, it’s the largest gathering of people from the College every year, and we wanted to tap into that energy and that community rather than people just listening to a few talks and wandering off,” he said. 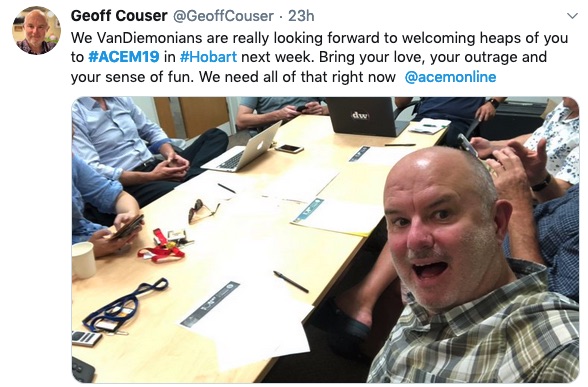 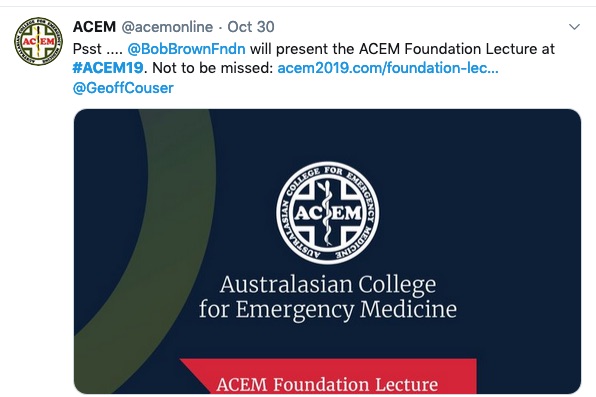 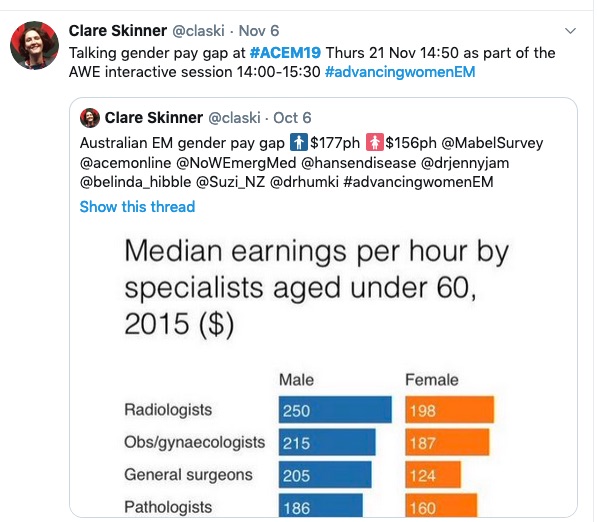 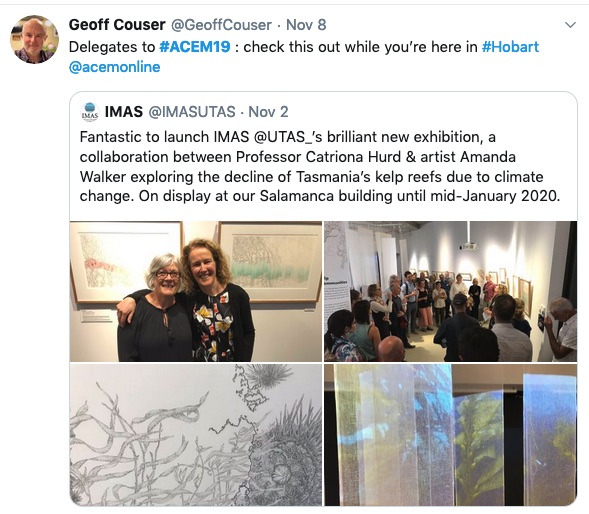 The 2019 ACEM ASM will be held in Hobart from November 17-21. Amy Coopes is there for the Croakey Conference News Service. Follow @coopesdetat, @acemonline and #ACEM19 for all the latest.