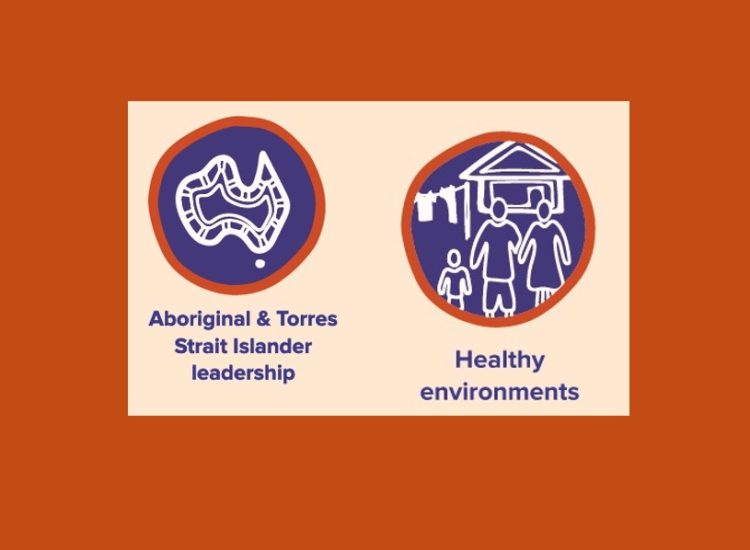 Two of the five priority action areas outlined in 'The Endgame Strategy' report.

Introduction by Croakey: Implementation of a blueprint for ending rheumatic heart disease is likely to bring wider health benefits, given that the social, cultural and environmental factors involved are also responsible for many other health conditions common in Aboriginal and Torres Strait Islander communities.

That’s according to the analysis below by Vicki Wade and Catherine Halkon, who also examine intersections between the new National Agreement on Closing the Gap and the RHD Endgame Strategy: The blueprint to eliminate rheumatic heart disease in Australia by 2031.

The authors are from RHDAustralia based at the Menzies School of Health Research, and the Telethon Kids Institute. Their analysis is timely as the COVID outbreak in western NSW provides a powerful reminder of the wide-ranging benefits of addressing determinants of health such as overcrowded and poor quality housing.

Biomedical treatments can help prevent disease progression, but prevention requires a different way of working, placing people and culture at the centre. Steps needed to prevent RHD directly relate to the socioeconomic outcomes and targets established under the new National Agreement on Closing the Gap.

The approach outlined in the RHD Endgame Strategy: The blueprint to eliminate rheumatic heart disease in Australia by 2031 exemplifies the principles and priorities of Closing the Gap reform.

This new approach, and the unenviable position of RHD being the leading cause of cardiovascular inequality between Aboriginal and Torres Strait Islander and non-Indigenous Australians, offers an opportunity to put the intent behind the new National Agreement into action, using RHD as a sentinel condition.

What is rheumatic heart disease?

ARF and RHD were once common in developed countries. Up to the 1950’s, whole hospital wards in cities like Melbourne and Sydney were dedicated to caring for children with ARF. With improved living conditions and access to health care – including cost effective and widespread availability of antibiotics – ARF and RHD are now virtually unheard of among non-Indigenous Australians.

However, Aboriginal and Torres Strait Islander people live with one of the highest burdens of RHD in the world. This results in loss of life, acute and chronic illness in children and young people, and a profound impact on families, communities and culture.

A new way of working to end RHD

The RHD Endgame Strategy is an evidence-based, community-informed call to action. This is the first time any nation has had such a blueprint for RHD elimination.

RHD control efforts in Australia, now and historically, focus on treating people after they have been diagnosed with ARF, or preventing the worsening of existing RHD. This focus fails to address the root causes of the disease and the opportunities to prevent progression to advanced disease.

Work to date has made a negligible impact on ARF and RHD cases over the past two decades. Modelling (in the RHD Endgame Strategy) estimates that if no new action is taken, more than 8,000 Aboriginal and Torres Strait Islander people will develop ARF or RHD by 2031, all requiring long and complex medical treatment, and of those, more than 600 will die.

These deaths, and the impact caused by RHD, are entirely preventable. A new approach is needed.

The Endgame Strategy recommends system and structural change – ways to improve environmental, social and economic factors which will reduce the risk of Strep A transmission and infection; improve assessment and treatment of Strep A infections and ARF; and support people already living with RHD to live life to the fullest.

The Endgame Strategy assesses possible approaches using an established grading system to identify those with the greatest potential impact, acceptability (to Aboriginal and Torres Strait Islander communities), and which are practical and readily implementable if properly resourced.

The Endgame Strategy emphasises the importance of community control and shared decision making and is not prescriptive about which strategies should be implemented where or how.

Instead, it recommends an experiential, co-design process so that communities can take action reflecting their cultural, geographic, available resources and political context.

RHD as a sentinel condition for Closing the Gap

The Closing the Gap refresh process was initiated by the Commonwealth Government in 2016 and has been the catalyst for reform: an opportunity to change the way Australian governments work with Aboriginal and Torres Strait Islander people, organisations and communities to address the fundamental, historical drivers of inequality.

Driven by the Coalition of the Peaks, a collective of around fifty Aboriginal and Torres Strait Islander peak organisations, the National Agreement on Closing the Gap has shared decision making at its core. The outcomes of the National Agreement comprise four priority reform areas and 16 specific socio-economic targets with the overarching objective of improving life outcomes for Aboriginal and Torres Strait Islander people to be equal to those of all Australians.

Partners to the National Agreement have now released their Implementation Plans. While these have been welcomed, it is clear that structural and systematic reform is needed to support plans and commitments if Australia wants to meet its 16 targets.

Pat Turner, Chair of the Coalition of the Peaks, has said that it is this reform that is “the game changer” with the targets providing an important measure of Government ‘ambition’. Recommendations of the Endgame Strategy provide an opportunity to explain how tackling a specific, contemporary, critical issue for Aboriginal and Torres Strait Islander peoples can help achieve the ‘ambition’ on the ground in communities where it matters most.

The Closing the Gap reforms have set principles and priorities which will guide implementation of the Endgame Strategy. This includes the four priority reforms articulated in the National Agreement:

While the Endgame Strategy is very clearly focussed on ending RHD, the same social, cultural and environmental factors responsible for ARF and RHD are responsible for numerous other health conditions common in Aboriginal and Torres Strait Islander communities including ear disease, kidney disease, trachoma and respiratory infections.

The prevalence of these diseases can be traced back to Australia’s history of colonisation and the resulting disempowerment, social, political and economic marginalisation of Aboriginal and Torres Strait Islander people, which has led to and continued to widen ‘the gap’.

This holistic implementation framework, with Aboriginal and Torres Strait Islander communities at the centre, was designed to address the need for disease specific prevention strategies to be coupled with structural and systems reform.

Listening to those with lived experience

At a national, regional and local level there will be decisions to be made about which specific prevention strategies are implemented but how implementation is managed, driven by articulated principles and values is as important. This mirrors the values of the Closing the Gap agreement.

The Endgame Strategy and the new Closing the Gap agreement were both launched in 2020. Though the documents in many ways are unrelated, closer reading reveals synergies, underpinned by a commitment to transformative change in ways of working with Aboriginal and Torres Strait Islander peoples.

At the largest scale, Closing the Gap has the potential to change Australia. For communities and families, these same principles can reduce the risk of RHD and the needless heartbreak it brings. 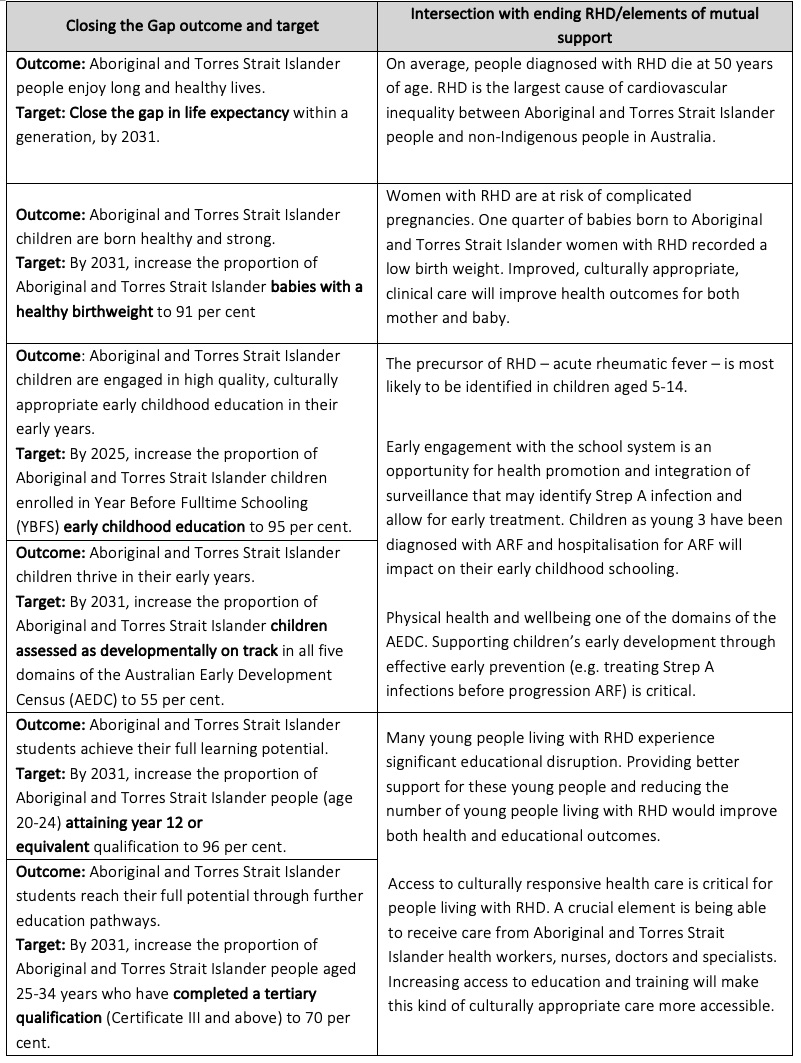 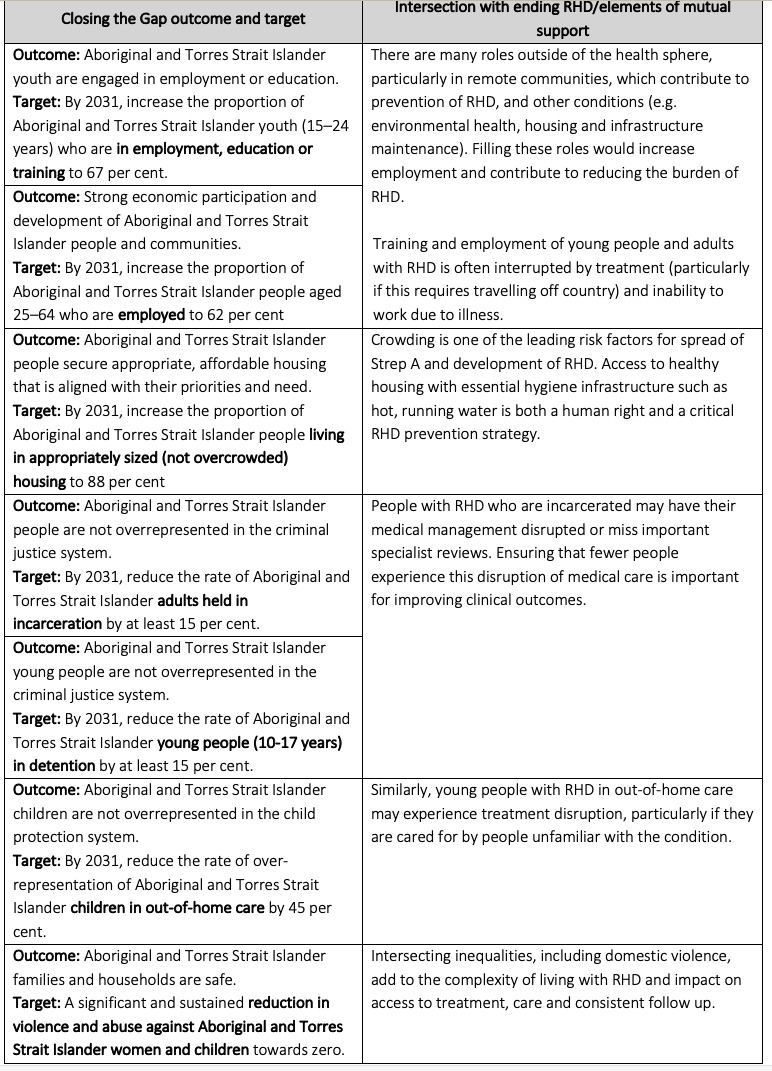 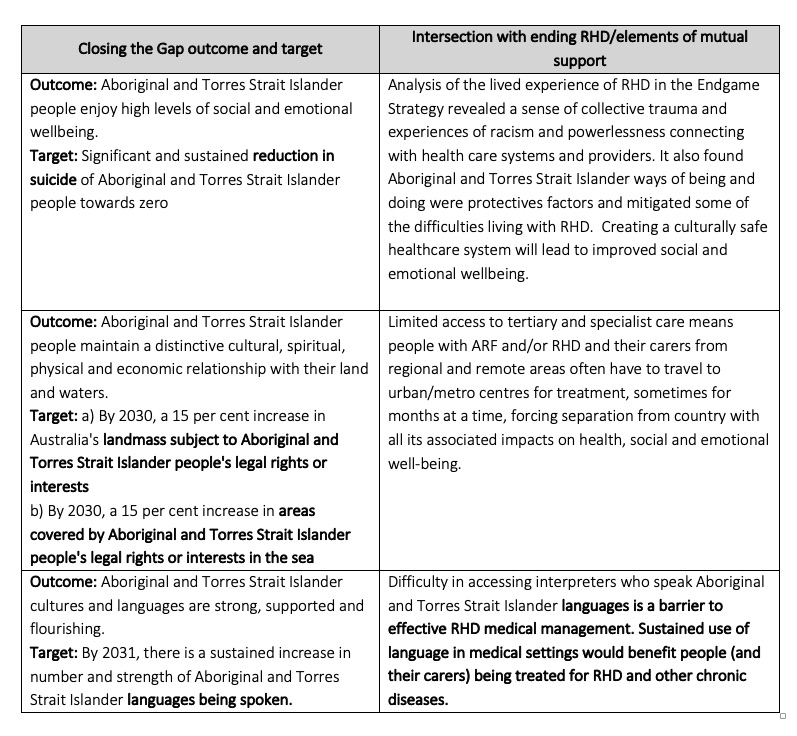 Vicki Wade (pictured L below), from RHDAustralia/Menzies School of Health Research, is a senior Noongar woman with over 40 years of experience in health at state and national levels. She is a recipient of multiple national awards including the 2019 AHHA Sidney Sax medal and CSANZ Indigenous Health lifetime award for her contributions to Australian health services policy, delivery and research, particularly in relation to Indigenous heart health.

Catherine Halkon (pictured R below), from RHDAustralia/Menzies School of Health Research & Telethon Kids Institute, holds a Master of International Management and is an experienced program manager with a background in research, education, policy and not-for-profit management. 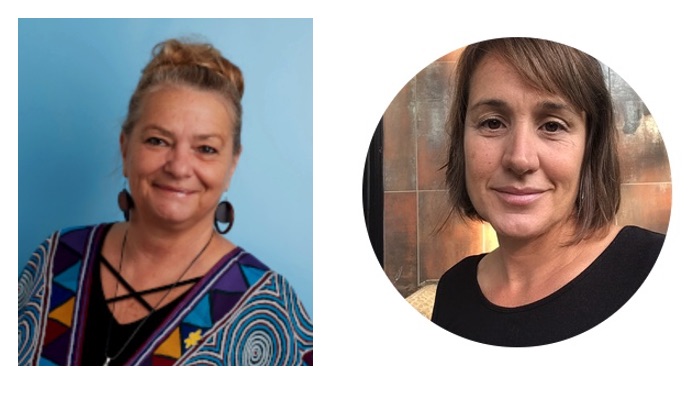