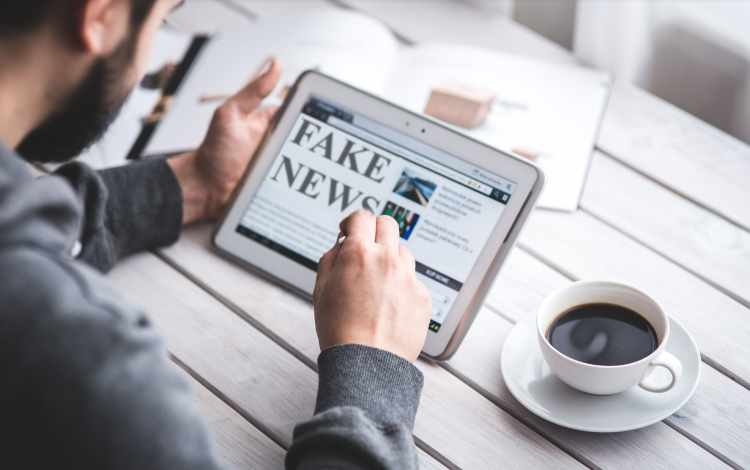 Introduction by Croakey: As COVID-19 outbreaks continue in NSW, Victoria and the ACT, with fears growing for Aboriginal families and communities in western NSW, health leaders are increasingly concerned that COVID-19 misinformation and disinformation are hindering the roll-out of the vaccination program.

A recent study found that in both the UK and the USA “fewer people would ‘definitely’ take a vaccine than is required for herd immunity, and that misinformation could push these levels further away from herd immunity targets.”

Concerns about misinformation and disinformation were also high on the agenda of the recent World Congress of Epidemiology, which Nicole MacKee is covering for the Croakey Conference News Service.

Experts and health leaders in Australia and around the world are calling for action to address the harmful impact of COVID-19 misinformation and disinformation.

Following the G20 Health Ministers meeting in Italy this week, a declaration was issued supporting strong multilateral cooperation towards ending the pandemic, including the following specific statement highlighting the need to combat misinformation:

We underline the need to promote vaccine confidence, by implementing the most effective, culturally appropriate, and science-based public communication and listening strategies tailored to the context of communities at the local level, to combatting misinformation and disinformation, and instilling trust in public institutions and experts.”

In Australia, a similar call has come from the Australian Epidemiological Association (AEA), the professional association for epidemiologists in Australia.

Members of the AEA have been providing expert advice to governments and health authorities on measures to combat the COVID-19 pandemic and they are concerned that the spread of misinformation and disinformation is hindering these efforts.

Lynch also stressed the disproportionate impact that misinformation and disinformation about COVID could have on at-risk communities.

Research has demonstrated that there is a negative correlation between a country’s gross domestic product per-capita and the prevalence of misinformation.

The AEA calls on governments and community leaders to uphold their ethical responsibility to their constituents and followers to support evidence-based public health efforts.” 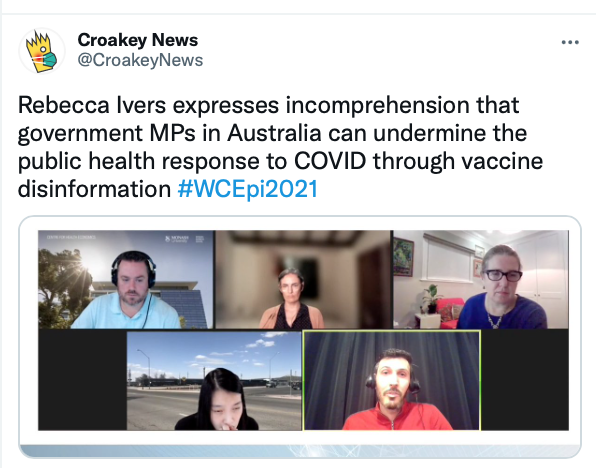 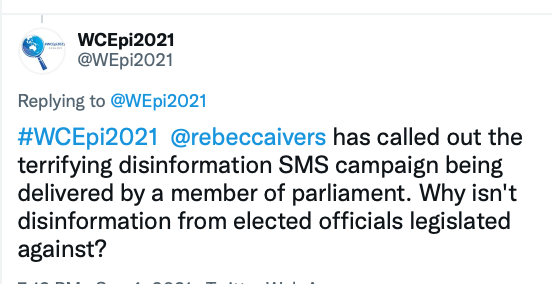 Community leaders are also speaking out on the dangers of COVID misinformation and disinformation.

With the COVID outbreak continuing to impact Aboriginal and Torres Strait Islander communities in NSW, the Northern Land Council this week appealed to communities to “beware false information being passed around in communities and online”. 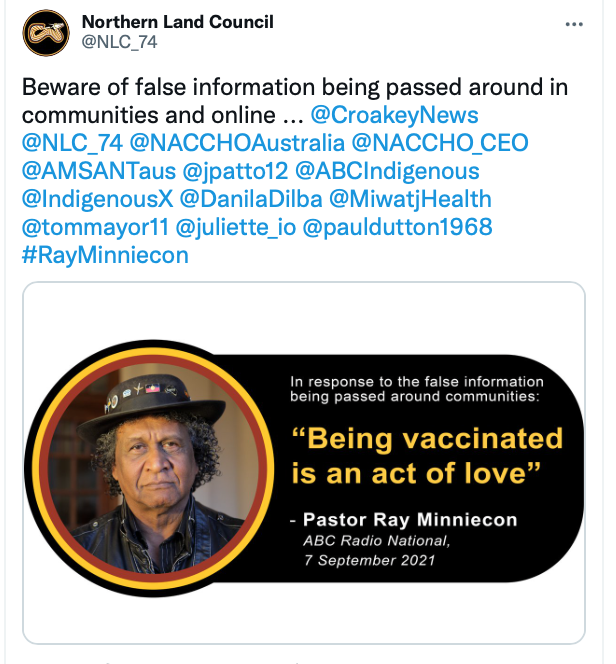 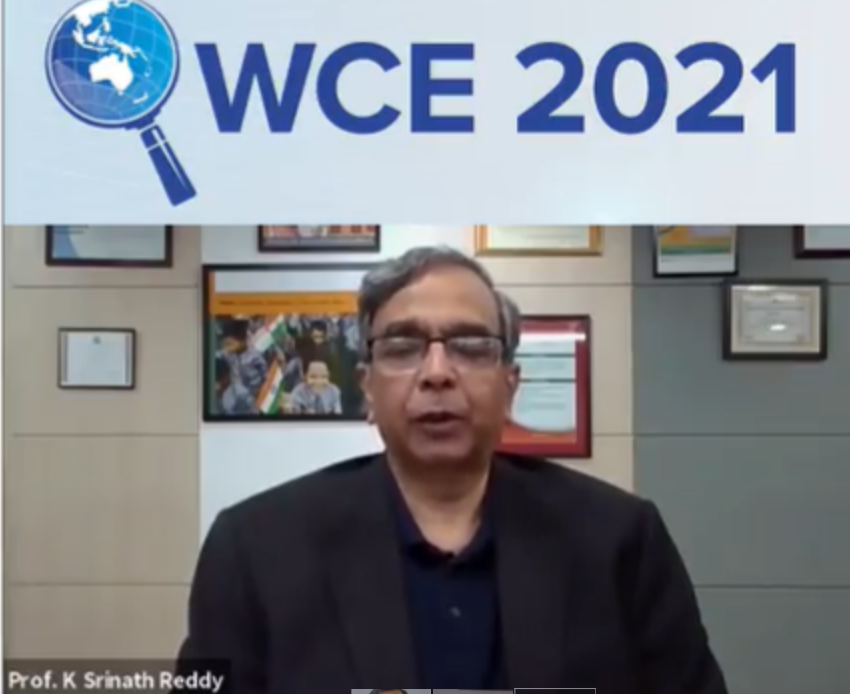 This call reflected the 5 September keynote address to the World Congress of Epidemiology by Professor K Srinath Reddy, President of the Public Health Association of India.

“Has epidemiology addressed how fake news is generated, how it is being tolerated, and with what consequences?” he asked.

Reddy told the 1,000-plus participants at the congress that social media and its role in fake news was set to persist into the future.

“We are seeing this in pandemic denial, in anti-mask protests, we are seeking it in vaccine refusal,” he said, noting it was important to look at the “upstream” drivers of these trends.

“These are the elements that are often left only to social science, but … social science and epidemiology are Gemini twins, they have to function together to advance public health.” 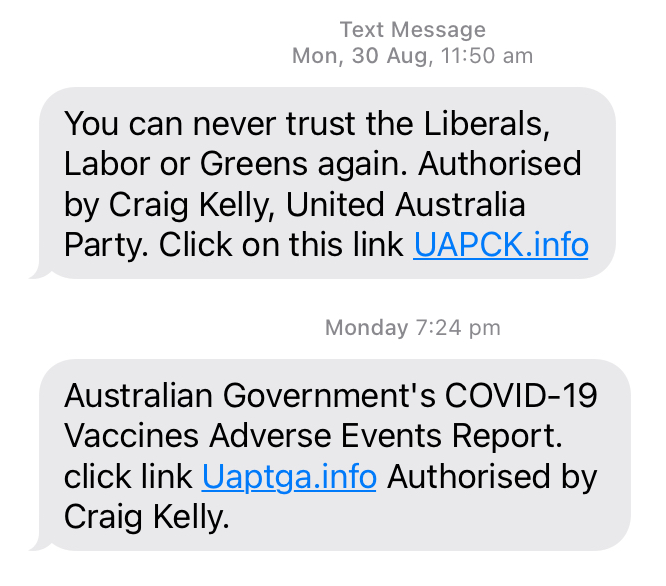 More than 4,000 people have complained about the messages to the Australian Communications and Media Authority.

The text message includes a link to a part of the Therapeutic Goods Administration (TGA) website that includes all notifications of possible adverse reactions to COVID vaccines, “without explanations and disclaimers”, said TGA Head Adjunct Professor John Skerritt.

said the publication of the data without context made the information “misleading”, adding that the TGA was exploring the legality of the use of the website information in this way and without permission.

“[This] is giving an incorrect picture of the safety of these vaccines, and it actually is discouraging people from being vaccinated,” Skerritt said.

He said the link to notification data included 448 reports of a death (495 as of 7 September) in the days or weeks after a COVID vaccine.

It’s not the cause-and-effect thing. When we look at cause and effect, we believe there is a total of nine reports of deaths that can be associated with vaccines, and this is against a background of 20 million doses of vaccines given in Australia.”

Skerritt said it was through these reports that it had been possible to identify extremely rare cases of adverse events associated with the vaccines, and transparency was important.

“We do want people to report, but … there is a degree of responsibility, especially among people who have a public profile, of explaining what it means and reporting it accurately.

“Because the worst thing that can happen, especially with the current outbreaks in Sydney and Melbourne, is to discourage people from being vaccinated because they think these vaccines are more dangerous than the data really shows.”

Misinformation was also front and centre in the opening days of a Senate inquiry into media diversity, after YouTube last month deleted 23 of the broadcaster’s videos that promoted misinformation about the COVID pandemic.

Former Prime Minister Kevin Rudd told the Inquiry that Sky News and News Corp co-chair Lachlan Murdoch “have a case to answer” for vaccine hesitancy and the promotion of “quack medicine”, SBS reported. 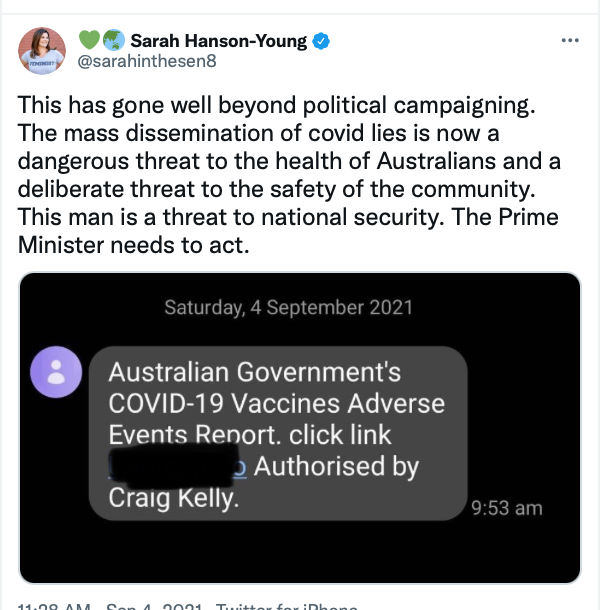 Earlier this week too, the ABC’s Media Watch called out a social media campaign incorrectly claiming that a video of COVID patients talking about their symptoms, organised by a Sydney lung specialist, featured actors not patients.

In a statement to Media Watch, Dr Teresa Anderson, Chief Executive, Sydney Local Health District, said: “It has been highly distressing for Dr Morgan and the patients to see their powerful messages undermined by these baseless and dangerous accusations, and to have their credibility questioned.” 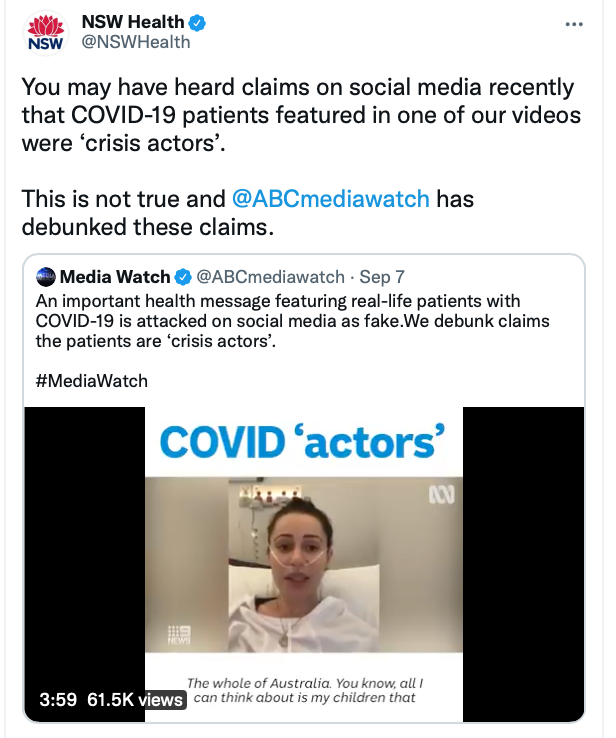 Another member of Federal Parliament, Senator Malcolm Roberts, has been using social media to undermine public health responses to the pandemic and to promote the use of Ivermectin.

On Monday, the Australian Veterinary Association (AVA) said it was “extremely concerned” by reports that Ivermectin – a veterinary drug used to treat parasites in animals – was being used by Australians to treat COVID-19.

Ivermectin, which is also used in treat head lice, parasitic worms, and head lice in humans, has also been promoted by Kelly as a potentially beneficial COVID treatment, despite not being approved or recommended for this.

On Instagram this morning, Senator Roberts was interviewed by a social media influencer and encouraged viewers to be sceptical of public health advice on COVID and information coming from the government. “Ignore what comes out of Parliament – Parliament feeds us a whole lot of crap” he said.

In Sydney last week, a person with COVID was admitted to Westmead Hospital with vomiting and diarrhoea after ingesting Ivermectin and other online drugs promoted as COVID treatments. The Guardian reported that the patient did not develop severe toxicity from the drugs but noted a Westmead’s toxicologist concerns about a growing trend of people taking unproven treatments for COVID that had been purchased online.

Similar concerns in the USA led the Center for Disease Control to issue this statement warning people against attempting to use Ivermectin to prevent or treat COVID. 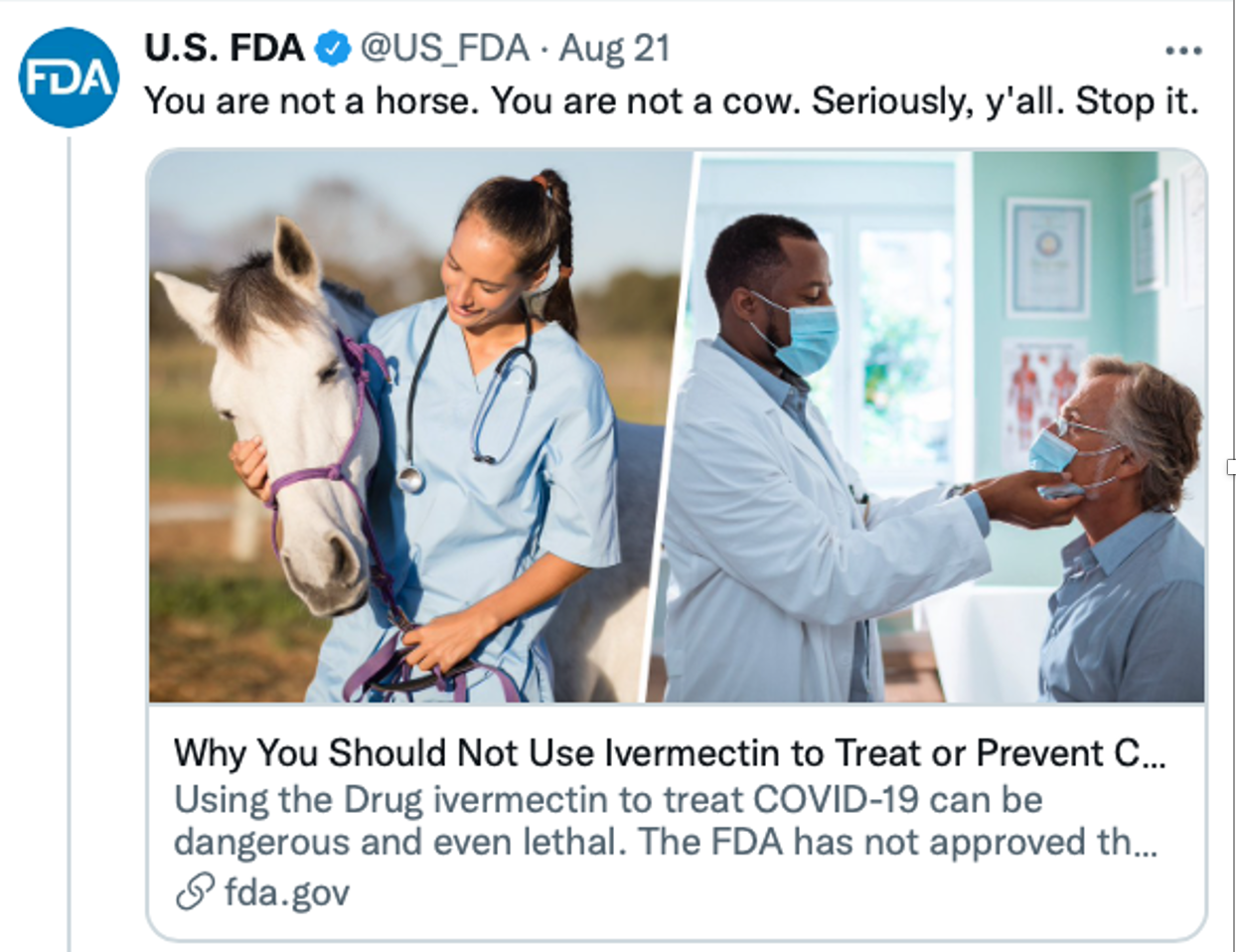 Speaking to Croakey after the WCE, the Public Health Association of India’s President, Professor K Srinath Reddy, said he hoped his comments would stimulate discussion amongst epidemiologists about the importance of countering “fake news” across the globe.

“We know there are several sectors of society that benefit from fake news: political and commercial interests, and sections of the media also drive and benefit from ‘polarised views’,” he said.

“It’s important that these interests are exposed.”

He said this polarity of discussion didn’t reflect the complexities of life.

“Life is more complex than the left and right polarities articulate,” he said. “While people will continue to hold on to their beliefs at the extremes, irrespective of emerging evidence, it is important to convince them of the science and especially encourage a ‘distribution shift’ of the whole population by informing and influencing the large ‘middle zone’ towards a position that reflects scientific understanding.

“We can then generate a popular consensus in support public health measures. Move the middle to tug the extreme end, which is at the anti-science extreme, to a more reasonable position.”

Reddy said while regulatory measures were required to address the media channels through which disinformation was disseminated, it was likely that closing one channel would only see the emergence of another.

Locally, the Australian Code of Practice on Disinformation and Misinformation was launched in February this year, and has been adopted by many major online platforms, including Twitter, Google, Facebook, and TikTok.

“All signatories commit to safeguards to protect Australians against harm from online disinformation and misinformation, and adopting a range of scalable measures that reduce its spread and visibility,” the Code states.

In addition to regulatory action, Professor Reddy said it was important to build “coalitions for advocacy”—bringing together basic, clinical, epidemiological, social and behavioural sciences – to support a “reset”.

“We need a multidisciplinary approach to solving this complex problem.” 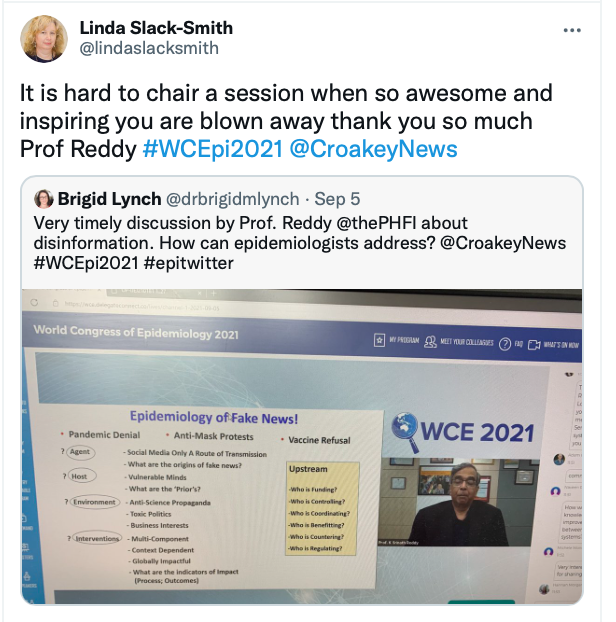 The Croakey Conference News Service will publish more stories from the World Congress of Epidemiology 2021 in coming days. Bookmark our ongoing #WCepi2021 coverage here, and follow the conference Twitter list.

You can read Croakey’s Submission to the Digital Industry Group Inc on the development of a Disinformation Industry Code here.