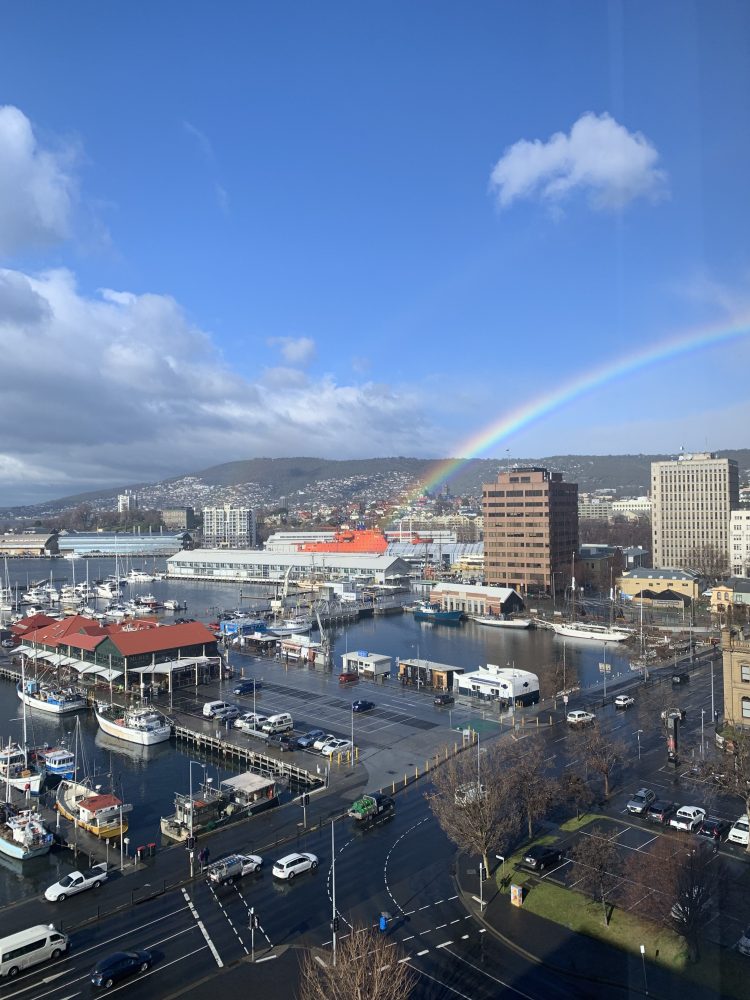 A rainbow greets delegates to nipaluna/Hobart for #NNF2019, where the dreams that you dare to dream really do some true. Image credit: Belynda Jane Abbott

Equity, access and the power of nursing at #NNF2019

They’re Australia’s single largest group of health professionals, living and working in some of the most remote corners of the continent and advocating tirelessly for their patients. So why are nurses still being sidelined in national debates on health?

This will be the focus of the Australian College of Nursing’s National Nursing Forum in Hobart this week, which aims to showcase leadership, advocacy and innovation in the nursing profession. Croakey journalist Marie McInerney will be there for the Croakey Conference News Service and previews the event below.

Cultural safety, climate change and aged care are just some of the issues on the agenda, and the College is offering a $500 prize for the best tweet on the #NNF2019 stream.

With snow atop Mount Wellington, Croakey is also running a #BeanieSelfieChallenge, offering free subscriptions to the best entrants, so get snapping!

The Australian College of Nursing (ACN) has sounded a warning that the nursing profession continues to be “wilfully ignored and even locked out of health care discourse and policy making”, at the expense of greater health access and equity in Australia.

Speaking ahead of its National Nursing Forum in Hobart this week (21-23 August), ACN CEO Adjunct Professor Kylie Ward said nursing is still too often “forgotten or ignored” in policy settings, right up to Ministerial level, largely because it remains a female-dominated profession.

Ward said that nurses are “under-represented, disproportionately represented or not represented at all”, particularly compared to medicine and pharmacy, and are “invisible” in media reporting on health.

“You look at any board, any committee, any strong discussion that is taking place around the country, we fight to get a nursing representative (on it) but there will be several medical representatives,” she told Croakey ahead of the forum, which gets underway on Wednesday.

“At that very core level, there’s an unconscious discrimination.”

Asked for examples in policy making, she said that there had been only “very limited engagement” of nurses in early and subsequently unsuccessful attempts by governments and their agencies to develop and roll out a national electronic patient record.

This compared to the way the Australian Digital Health Agency engaged with nurses on the development of My Health Record from its inception, she said.

But Ward said that disregard for nursing expertise is widespread, with the profession still battling for the right to work to their full scope of practice.

This year, both the Australian Medical Association and Royal Australian College of GPs strongly opposed recommendations from the MBS Review Nurse Practitioner Reference Group, which described the requirement for nurse practitioners to work with a medical professional as a ‘system inefficiency’ and a ‘barrier to care’.

Ward said that the ongoing restriction of nurse roles contributed to health equity and access issues, including in remote Australia where nurses still live in many areas where most other health specialties are ‘fly in fly out’.

Nurses number nearly 400,000 in Australia, making them not only the single largest group of health professionals in Australia, but also the most widely and evenly distributed, Ward said.

Yet read, listen or watch news stories on Australian health care and “you would be forgiven for thinking nurses either don’t exist or at the very least have nothing constructive to contribute to the health care conversation”, she recently wrote.

Last year the Australian Primary Health Care Nurses Association (APNA) conference highlighted the poor representation of nurses in TV medical hits like Grey’s Anatomy and Australia’s All Saints, where they were too often relegated to the background.

But there’s a broader issue in news media, and one that goes beyond Australia.

Nurses were the source of only two percent of quotes in articles about health, and were never sourced in stories on health policy, according to the landmark 2018 US Woodhull Study. (You can read more on that research and its implications in Australia here).

By comparison, physicians made up 21 percent of quotes in healthcare stories; healthcare executives or administrators comprised 10 percent; researchers working on healthcare‐related topics nine percent; and patients or their families four percent.

When nurses were quoted, they “mainly commented on the nursing profession itself, and were rarely used as sources based on their expertise or knowledge of broader healthcare topics”, the study found.

That has many implications, Ward said, including that “smaller and sometimes less relevant groups are being given an unjustified opportunity to shape the public healthcare agenda”.

These issues will be centre stage at #NNF2019, where the theme will be ‘Nursing Now — The Power of Policy’.

The three-day event in nipaluna/Hobart will showcase the international Nursing Now global campaign being run by the World Health Organization and the International Council of Nurses to raise the profile and status of nursing worldwide.

“Including nurses in policy making, health care teams, and enabling nurses to work to their full scope of practice will significantly diminish the health care disadvantage experienced by many Australians, particularly the elderly, people with complex chronic conditions and people with mental illness,” Ward says.

The forum does not officially get underway until Wednesday, but the College’s Fourth History Conference, ‘The Power of History – Nursing Now’, drew plenty of delegates to Hobart for an early start to proceedings on Tuesday. We’ve clipped some of the tweets from a fascinating range of sessions below. 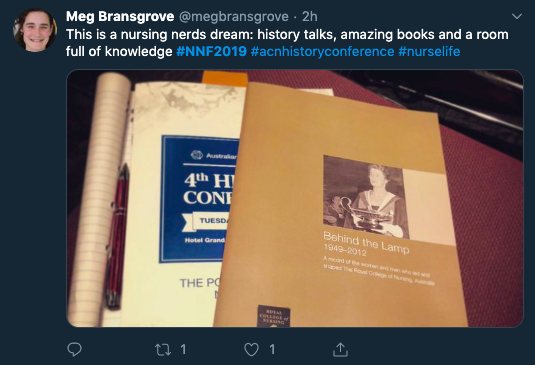 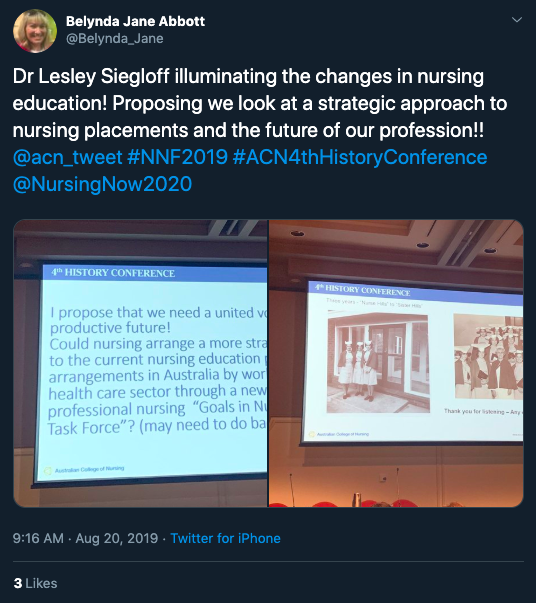 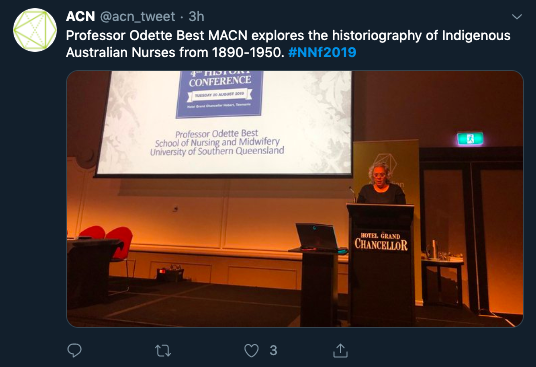 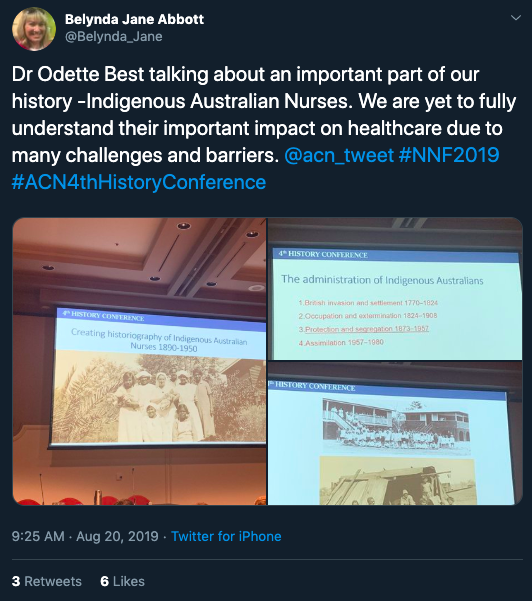 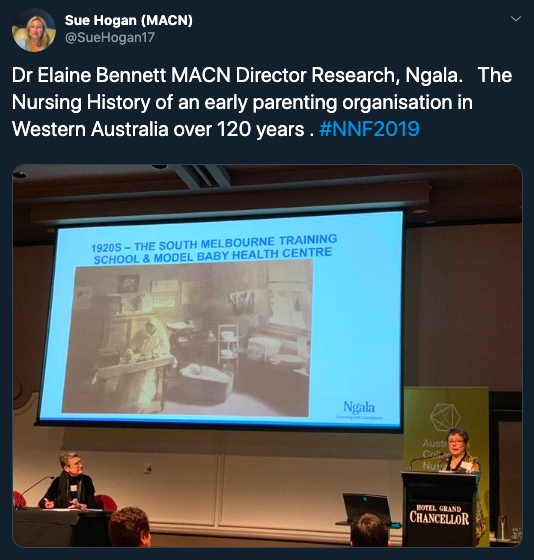 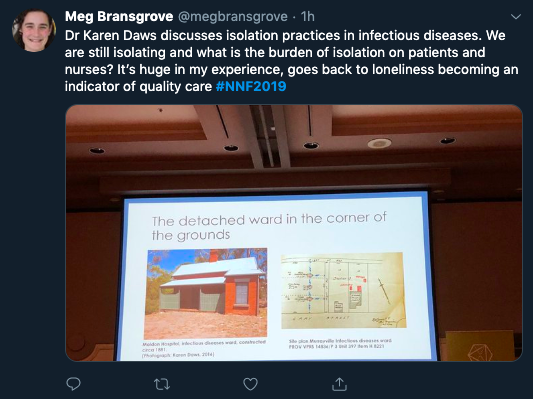 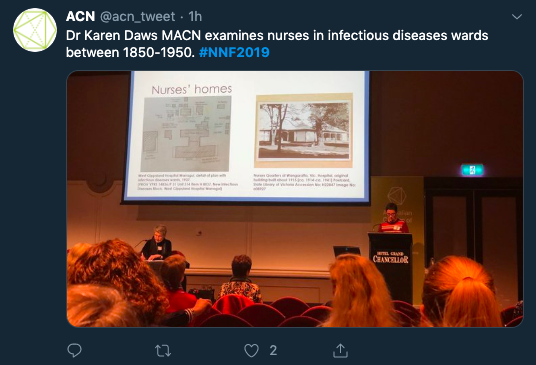 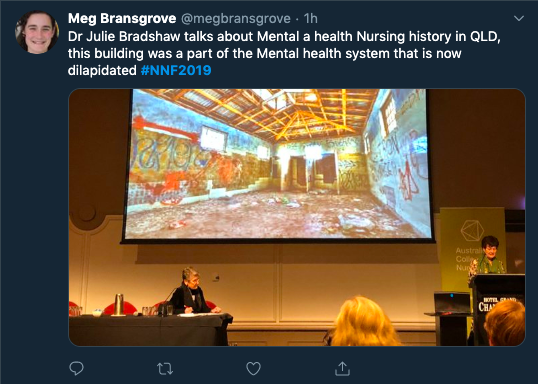 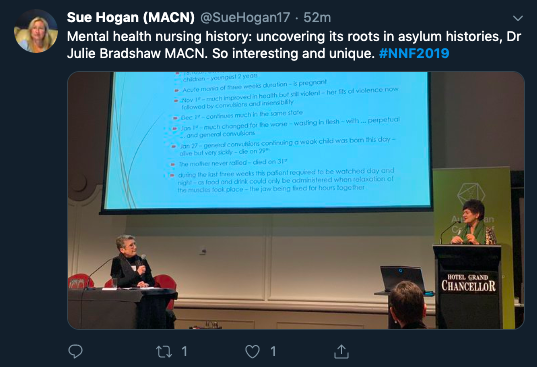 Speaking up and speaking out

The relative invisibility of nursing in public policy and debate is not for want of the profession taking a strong stand on many public health issues.

Last year the ACN, Congress for Aboriginal and Torres Strait Islander nurses and midwives (CATSINaM) and other nursing groups came under attack from vested interests and right wing media outlets over new codes of practice that require nurses and midwives to improve the cultural safety of health services and systems for Indigenous patients and colleagues.

Ward said cultural safety will be a priority topic at #NNF2019, with a keynote to be delivered by Melanie Robinson, CATSINaM CEO.

In recent weeks the ACN has also been vocal in its support for the Reproductive Health Care Reform Bill 2019 which seeks to decriminalise abortion in New South Wales.

“Decriminalisation of termination of pregnancy by registered health professionals ensures safe quality care for women and allows health practitioners, such as nurses and doctors, to provide care without risk of being incarcerated,” Ward last week told the NSW Parliamentary Committee on Social Issues.

Another keynote speaker at #NNF2019 will be Luke Yokota, the inaugural Chair of the ACN Men In Nursing Working Group who will talk about the ACN’s national efforts to address the shortage of men in nursing, where women still make up 90 percent of numbers.

“We still haven’t really moved to a place where it’s okay for men to care,” Ward said of  stigma that persists around men going into nursing.

Yokota will also participate with other emerging leaders in the profession in a Millennial Panel discussion on reducing the carbon footprint of the health care sector which currently contributes about seven percent of Australia’s total carbon dioxide emissions — roughly the same as South Australia — driven by hospitals and pharmaceuticals.

The ACN has been outspoken on climate change and was signatory to an open letter from an unprecedented coalition of health, welfare, and environment groups ahead of the May federal election, calling on politicians to recognise climate change as a core public health issue.

Aged care will also be on the agenda at #NFF2019 with the ACN having urged the Royal Commission into Aged Care Quality and Safety to mandate a minimum requirement that a registered nurse be on-site and available in residential aged care at all times.

#NFF2019 will also showcase the work of Australian nursing’s leading lights, with a dedicated stream of sessions to feature their work.

This follows the launch this year of the inaugural Health Minister’s Award for Nursing Trailblazers, part of the Australian Nursing Now campaign.

Ward said Johnston’s work is indicative of what nursing innovation could deliver for the health sector.

According to the award citation, the INSPIRED program had significantly reduced the length of hospital stays and in-hospital deaths, delivering significant cost savings and better quality deaths for participants, including better symptom control, advance planning, closeness with relatives and spiritual care.

“That was all nurse-led,” Ward said.

“If the government puts money aside and lets people be creative and innovative and allows nurses to develop in ways they’ve never been able to before then we’ll see some real (health) reform, now and into the future.” 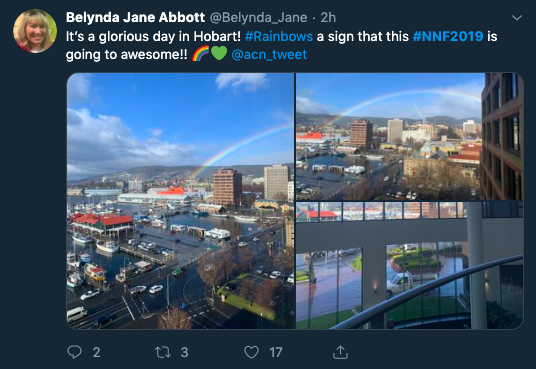 The Australian College of Nursing’s National Nursing Forum will be held from August 21-23 in nipaluna/Hobart. See the full program here.

Croakey journalist Marie McInerney will be covering the event for the Croakey Conference News Service and you can follow her live dispatches at @CroakeyNews. Bookmark this link for all our coverage and join the @ACN_tweet conversation on the hashtag #NNF2019

Correction: This article has been corrected, following contact by ACN CEO Adjunct Associate Professor Kylie Ward, to clarify comments about the profession’s involvement in the development of My Health Record.