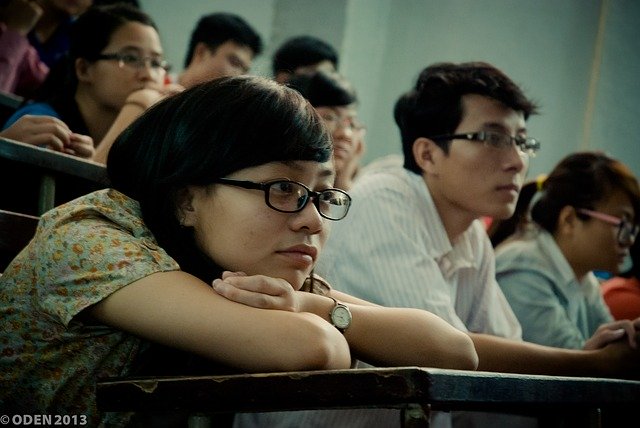 Equity for students during the COVID-19 pandemic and beyond

Introduction by Croakey: The announcement by Minister for Education, the Hon Dan Tehan, that students who fail more than 50% of their subjects will be denied HECS funding has raised concerns that this measure will further disadvantage students who already face barriers to accessing education, including Aboriginal and Torres Strait Islanders, students from poor backgrounds and those from rural and remote areas.

Another group of students whose needs are being neglected are international students.

For years Australia has relied on international students to fund much of our university and higher education sector.

Demand for Australian university education from international students has promoted growth in the university sector, supporting jobs of hundreds of Australian academics and support staff.

While in Australia many students take on part-time jobs in service sectors which also contribute to our economy.

International students make up more than a third of doctoral students and postdoctoral fellows at universities.  These students play a vital role Australia’s research and development workforce.

There is no doubt that international students will be part of every Australian university research effort working to find a vaccine or treatment for COVID-19.

International students who remain in Australia our largest single largest group of skilled migrants, thus contributing to the intellectual and cultural wealth of our nation throughout their lives.

Despite this significant contribution,  the well-being of international students has been largely neglected during the current COVID-19 pandemic.

The post below by Alan Morris, Gaby Ramia, Shaun Wilson, Catherine Hastings and Emma Mitchell, describes the precarious situation of many international students in the current pandemic situation who have found themselves without a job, not eligible for benefits and unable to return to their home countries.

This article first appeared in The Conversation.

Many international students in private rental housing in Sydney and Melbourne were struggling before COVID-19 hit. Our surveys of these students before and during the pandemic show it has made their already precarious situations much worse.

Of those with paid work when the pandemic began, six in ten lost their jobs. Many were struggling to pay rent and tuition fees.

Our new report is based on two surveys* of several thousand students. To track financial distress, we developed eight indicators from Australian Bureau of Statistics measures for the first survey in late 2019. We used these again for the second survey in mid-2020. The responses are shown below.

Since the lockdown, students’ responses showed:

Our 2019 survey showed about one in five international students in the private rental sector were already in precarious housing situations. The second survey revealed far more were living precariously because of deteriorating finances during the pandemic. 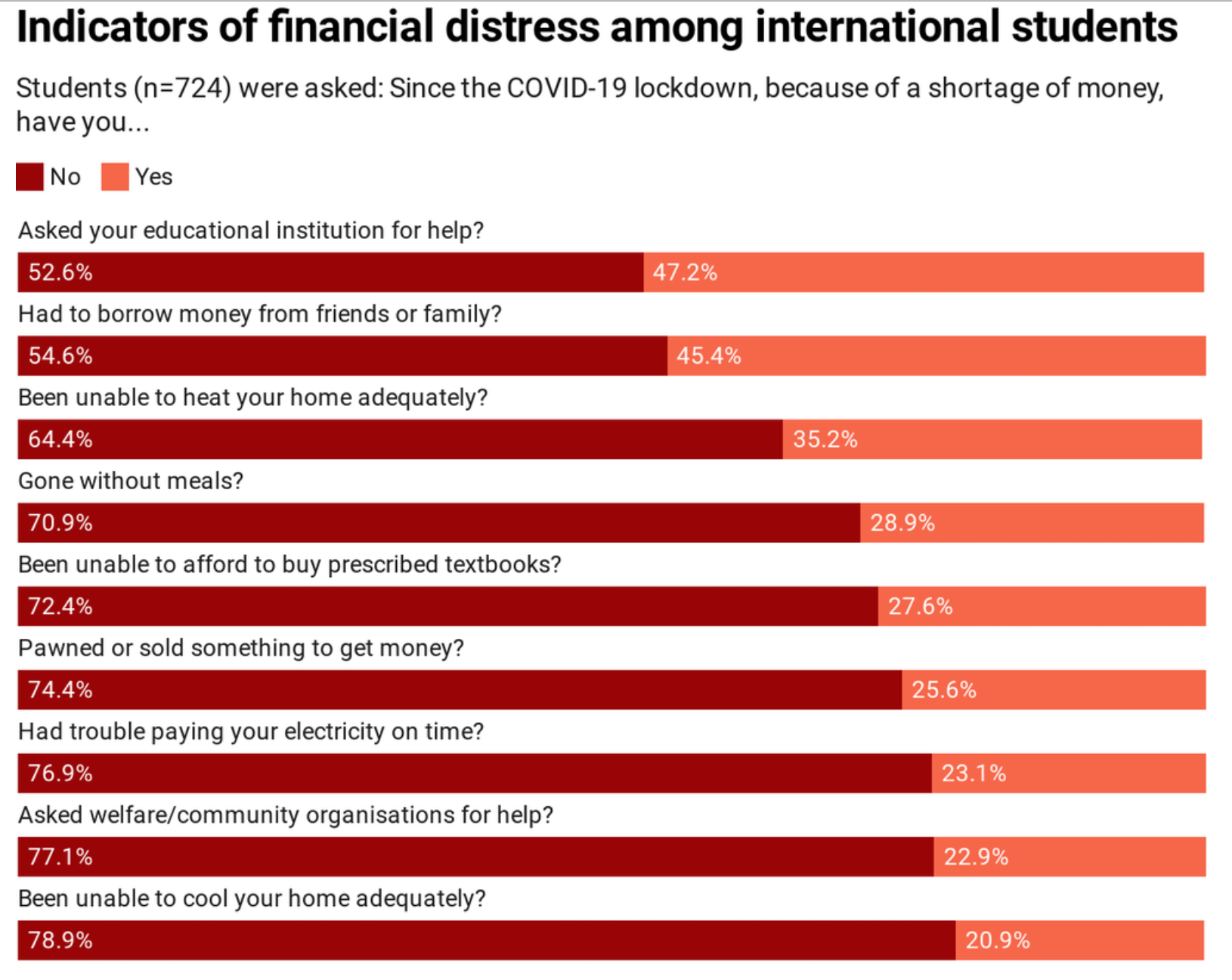 This article also draws on 26 semi-structured interviews with students to share fresh insights into how they have coped as the pandemic unfolded in Sydney and Melbourne.

Incomes from work and family lost

The central financial issue has been loss of income during the pandemic. Just 15% of students who’d lost jobs had found a new one. Almost two-thirds (63%) of those who still had a job had had their hours cut, most by about 50%.

At the same time, financial support from families decreased for just over four in ten students. Only 12% said it had increased.

Struggling to pay the rent

Six in ten respondents agreed paying the rent had become more difficult. Since the pandemic, 27% said they were unable to pay the full rent. One in five agreed or strongly agreed with the statement: “I feel I could become homeless.”

A VET student described the impact of losing her job on her finances:

I could really save some money in the month of February and March that really, you know, took me until the month of April. So, I was not really worried in April, but then as May started and nearly the middle of May, I was really worried about my account balance. I’d already given multiple calls to different organisations by then for any kind of support.

Yeah, we are worrying [about paying the rent] and like we emailed to our agency to make discount or something like that, but they said it’s hard for them, an agency and landlord too, because the landlord has a mortgage […] and everybody’s struggling and so for now they don’t have any discount […] so we are worried because before that, before this current thing [the pandemic], we had our part-time jobs and the three of us have now lost our jobs.

A vocational education and training (VET) student from Sydney, who lost her job in March, described how she was treated when she couldn’t pay the full rent:

So I was not able to pay my full rent [… ]because of that they [the agent] were like, ‘Okay, don’t pay rent if you don’t have any money, we’ll understand.’ […] Then all of a sudden by mid-April they were like, ‘Hey, you have this much outstanding rent and you have to pay it immediately, otherwise the landlord is going to file the case to the tribunal.’ And I was shocked, and it was out of nowhere, and I told them, ‘You were the one who told me you didn’t have to pay rent if you don’t have it.‘

Studies and well-being suffer too

Students are struggling on several fronts. One student remarked:

Yeah, it’s crazy. It’s hard sometimes so that I’m not sleeping and then you have to do school work as well and then you have to think about these things like managing, talking to agents every day and negotiating and searching for jobs. There’s just a lot of things coming together.

Six in ten respondents agreed or strongly agreed financial stress was affecting their studies. Over half (54%) reported financial difficulties and 44% worried they might not be able to pay tuition fees.

I’ve also been trying to get fees reduction but every time it has always been like a negative response. So it has actually been pretty difficult […] especially with we’re not getting the same quality of education.

Just over a third (35%) worried they might have to leave Australia before completing their studies.

In this current pandemic the Australian government has made it more clear that they don’t really care about the [international] students. I don’t know why is that. It’s pretty much heartbreaking considering the input of them in the Australian economy.

Loneliness on the rise

A university student in Sydney said:

Our research is revealing just how precarious the lives of international students have become. Policymakers should heed the evidence and consider how to make Australia a better place to study.

* The first survey was distributed by 43 educational institutions (24 VET, ten universities, seven English language and two foundation course institutions) to their international students in late 2019. It received 7,084 responses. The second was distributed in June-July 2020 to 3,114 respondents of the first survey who had agreed to face-to-face interviews and to be recontacted. The second survey received 852 responses.

PrevPreviousSexual misconduct: is the medical regulator reinventing the wheel?
NextThe Health Wrap: aged care lessons, plus the latest news on climate health, dementia and so much moreNext