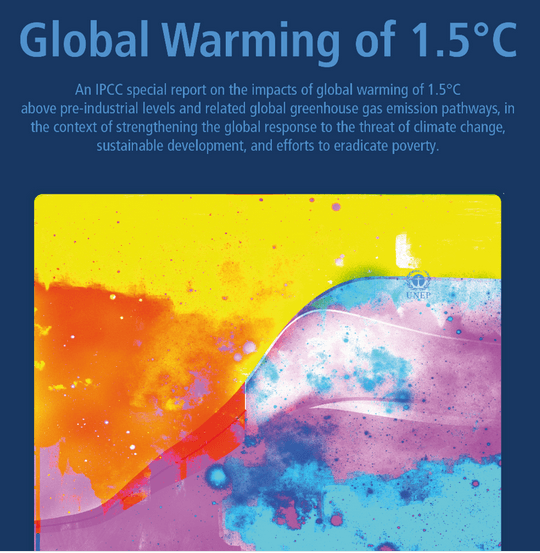 “Every bit of warming matters”: heightened warning on climate change from IPCC

Actions taken to tackle climate change over the next few years “are probably the most important in our history”, according to a new assessment from the Intergovernmental Panel on Climate Change (IPCC) report released in Korea today.

Declaring that “every bit of warming matters” for planetary and human health, the IPCC says that limiting global warming to 1.5 degrees Celsius rather than 2.0 degrees would provide clear benefits to people and natural ecosystems.

But to do so, it says, would “require rapid, far-reaching and unprecedented changes in all aspects of society”, with the world currently on a trajectory of 3 to 4° C rises.

See Guardian Australia’s blow by blow of the findings and responses and The Conversation’s special climate report ‘at a glance’.

“Climate change is shaping the future of our civilisation,” IPCC Working Group II chair Hans-Otto Portner told a media conference in Incheon, following the release of the report prepared in response to an invitation from the UN Framework Convention on Climate Change (UNFCCC) when it adopted the Paris Agreement in 2015.

“If action is not taken it will take the planet into an unprecedented climate future compared to what has happened in all of human evolutionary history,” Portner said.

The report comes as the the Federal Environment Department’s quarterly Update of Australia’s National Greenhouse Gas Inventory showed – which, as Dr Lesley Russell reported, the Federal Government sat on for seven weeks – that, in the first three months of 2018, Australia had the highest levels of carbon pollution since 2011.

It should also, as Peter Sainsbury, a past president of the Public Health Association of Australia, says in this earlier report at Croakey put pressure on the Australian Government  although there were no signs today that it would.

Prime Minister Scott Morrison – under fire, as the Guardian reported for having recently abandoned a policy to cut emissions from electricity – said his government would “look at the report carefully” but made the point Australia was responsible for a little more than 1% of global emissions (overlooking that we have the second highest emissions per capita).

You can read a summary, each of the chapters (although not yet a final published document): http://www.ipcc.ch/report/sr15/ and the media release.

Croakey readers may be interested to read this synthesis of the health content of the IPCC report compiled by the Climate Tracker journalism project, which notes that information on the health implications of restricting global warming are scattered throughout the comprehensive IPCC report.

Some of the key health messages are outlined in a forward co-written by Kristie Ebi  a Lead Author of the IPCC report: 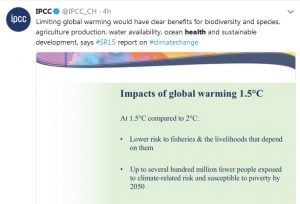 “This highlights the importance of ensuring health professionals are engaged in decisions regarding specific mitigation actions to ensure that accompanying policies and measures are implemented to protect and promote population health when such actions are necessary.”

“The world’s leading climate scientists are again telling us predicted rises in land and sea temperatures from global warming present a serious danger to the health and safety.

“We cannot delay halting the use of fossil fuels any longer with strong policy needed to help Australia transition away from fossil fuels and protect human health from the damaging effects of climate change.”

OraTaiao: The New Zealand Climate and Health Council says the report points to still serious health consequences at 1.5°C, but “the longer we delay acting, the harder it will be to protect health.” In a statement, it says:

“The good news is that tackling climate change presents huge opportunities to improve health and create a fairer society. Energy efficient homes can be warmer, drier and more affordable; low carbon transport can make it easy to be more active and clear the air; and shifting towards a plant-based food system can reduce cancer and address our freshwater crisis.

The report’s full name is Global Warming of 1.5°C, an IPCC special report on the impacts of global warming of 1.5°C above pre-industrial levels and related global greenhouse gas emission pathways, in  the  context  of  strengthening  the  global  response  to  the  threat  of  climate  change,  sustainable development, and efforts to eradicate poverty.

The IPCC, United Nations’ scientific panel on climate change, said it framed its report in context of the UN’s Sustainable Development Goals and the goals to eradicate poverty.

The result paints a “far more dire picture of the immediate consequences of climate change than previously thought” and says that avoiding the damage requires transforming the world economy at a speed and scale that has “no documented historic precedent”, according to the New York Times, which says it describes a world of worsening food shortages and wildfires, and a mass die-off of coral reefs as soon as 2040 — a period well within the lifetime of much of the global population. 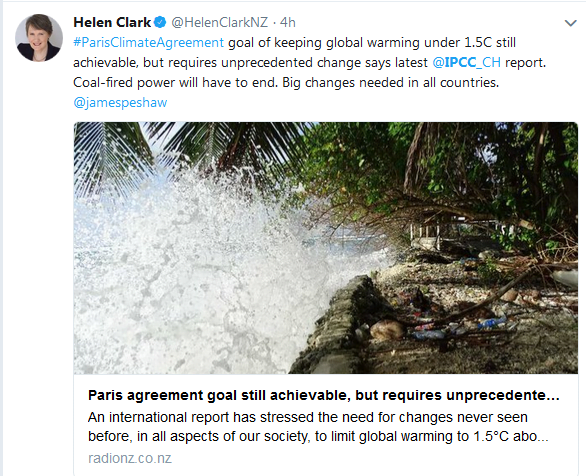 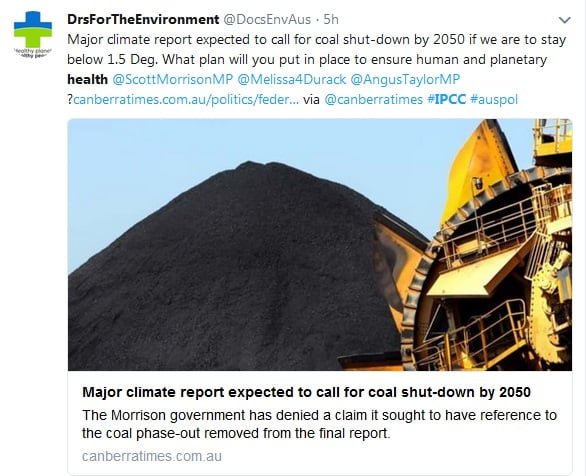 We will update this post with more responses as they come