Every year. One million babies. Die on the day they are born.

Unprecedented progress has been made in reducing maternal and child deaths around the world since 1990, according to a new report from Save the Children.

Nonetheless, the statistics remain shocking.  Of the three million babies who die each year in their first month of life, almost two-thirds are from just ten countries.

Thanks to Joanne Simon-Davies and the Commonwealth Parliamentary Library’s FlagPost blog for allowing republication of this article.

Poverty’s terrible toll upon the newborn

Every year three million babies die within the first month of life, with one million dying on the day they are born.

Most babies die from preventable causes such as infections.

Every day, 800 women die during pregnancy or childbirth.

These statistics, released last week, are published in the 14th annual State of the World’s Mothers report by the organisation Save the Children. This FlagPost will show that the new born baby is still the most vulnerable and at risk of dying in both the developing and industrialised nations.

To determine in which country a baby is most likely to survive, Save the Children have caculated their first ever “Birth Day Risk Index” to identify the safest and most dangerous places to be born across 186 countries.

In addition, the report also contains the annual “Mother’s Index” (first published in 2000), which ranks 176 countries using five indicators to determine which countries have the best outcomes for mother and baby, these being:

For more information on the methodology, see page 75 of the report.

Below are some of the key findings from the report:

1. The first day of life is the most dangerous for both the mother and her baby; babies born in Somalia has the highest risk of dying on day one (18 deaths per 1 000 live births), followed by Democratic Republic of the Congo, Mali and Sierra Leone (all with 17 deaths per 1 000 live births). A mother in sub-Saharan Africa is 30 times more likely than a mother in an industrialised country to lose a newborn baby at some point in her life. On average, 1 in 6 African mothers are likely to lose a newborn baby.

2. Babies born to mothers living in the greatest poverty face the biggest challenges of survival. Virtually all (98 per cent) of newborn deaths occur in the developing world. Almost two-thirds (65 per cent) of the three million deaths in the first month of life occur in just ten countries:

However, whilst the number of deaths is still very high, according to Save the Children:  “The world has made unprecedented progress since 1990 in reducing maternal and child deaths. Working together, governments, communities, nongovernmental organisations and families have reduced the annual number of children under five who die each year by over 40 per cent — from 12 million to 6.9 million. Progress for mothers has been even greater, with deaths declining almost 50 per cent since 1990 — from 543 000 to 287 000 per year.”

3. Low cost equipment such as antibiotics to treat infection, resuscitation devices to assist with breathing, plus basic education in regards to proper hygiene and breastfeeding along with trained health workers, saves lives of both mothers and babies. According to the report, there is a shortage of five million health workers …. in particular those trained in midwifery skills. Also, 40 million women each year give birth at home without the help of a skilled birth attendant, increasing the risk of death of either the mother or child.

There is further information on the Save the Children report here.

• This article was first published by the FlagPost blog 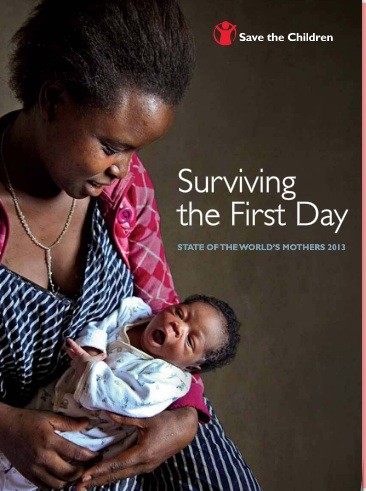