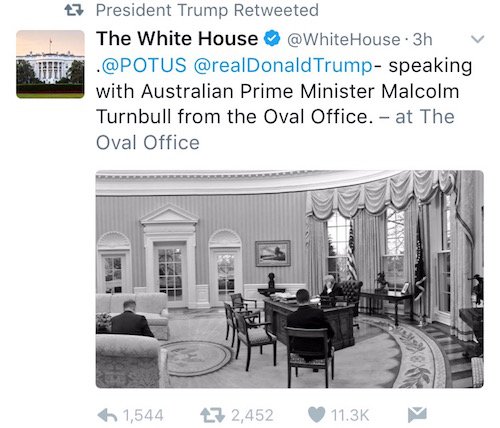 “Everybody’s talking about it”: as Trump trashes health, how should we respond?

Yesterday, at the height of the confusion and outrage that poured out into our Twitter feeds as US president Donald Trump’s executive order “to protect the American people from terrorist attacks by foreign nationals admitted to the United States” came into rapid effect, Croakey founder and moderator Melissa Sweet tweeted a pertinent question:

“As (the) US goes rogue, what are the responsibilities & possibilities for health & medical professionals/organisations to respond?”

Trump’s presidency had an eventful first week, as he highlighted himself in this short video posted on Twitter. According to this explainer from a UK publication, he had signed 13 executive orders by Saturday. Each one has complex ramifications.

The domestic health effects of Trump’s roughshod approach to reform, including the order which paves the way for the repeal and replacement of Obamacare, have been foreshadowed at Croakey and elsewhere, but things are moving quickly.

Many of his other initiatives such as the order to begin construction of the Keystone and Dakota Access Pipelines; plans for immediate construction of the border wall between the US and Mexico; the withdrawal of aid funding to organisations that offer abortion services; a four-month hold on refugee arrivals; and a 90 day ban on entry to the United States for people from seven predominantly Muslim countries (with its draconian enactment over the weekend) have potentially far reaching human rights and health implications.

An article published in The Economist last week explains how the reinstatement of the “global gag rule” is perversely likely to increase the number of abortions in less developed countries and pose broader threats to health, while an analysis in the Canadian Medical Journal, paints a worrying picture of the possible repercussions of proposed changes to US relations with the United Nations and the World Health Organization.

Human rights organisations and some International political leaders have condemned the suspension of refugee arrivals by the Trump administration, and the arbitrary ban on entry for people from the seven specified countries.

There has also been some internal political dissent, widespread protests by many thousands of people in support of those caught up in the ban, and legal challenges which have enjoyed some success, although the order currently remains in place, seemingly subject to confusion and diverse interpretation.

Here in Australia it doesn’t take much imagination to comprehend the health implications for refugee or immigrant populations suffering prolonged uncertainty, dread and exclusion. Our Foreign Minister, Julie Bishop, has reportedly expressed support today for Trump’s “strong immigration and border protection policies” while saying her department will endeavour to ensure that Australians can continue to access the United States.

After a phone call between President Trump and Prime Minister Malcolm Turnbull yesterday, media outlets reported that a deal struck under the Obama administration for the US to resettle some refugees currently held on Manus Island and Nauru would go ahead.

Meanwhile in the US, the chaos and confusion continue. There are reports of health professionals, academics and others continuing to be barred from US entry despite holding valid work and study visas. Those from the targeted nationalities living in the US are understandably unsettled and anxious, raising fears particularly for the health of children.

Individually and collectively, it is likely that those working in health are still trying to comprehend, and to form a response to, the events of the past week, but it is something that seasoned commentators, such as Lancet Editor Richard Horton and US surgeon and writer Atul Gawande (see the tweets below), believe needs to happen.

Below are some early responses to Melissa Sweet’s question, including the simple call for clear messages of condemnation, increased support for refugee and aid organisations, a boycott of US-based journals and academic meetings, a petition to halt state visits from the US, and calls for stronger, clearer leadership by our health professional bodies.

In the weekly video update mentioned at the beginning of this post, Trump says his administration has “hit the ground running, at a record-breaking pace”.

Yes, “everybody’s talking about it”. The hyperbole might be laughable if the health of so many people were not at stake.

Croakey is an open forum for this conversation to be productive and powerful, and there are others. We encourage you to engage with each other, and with those whom you believe should be showing leadership, to formulate an effective response to this threat to our collective future. 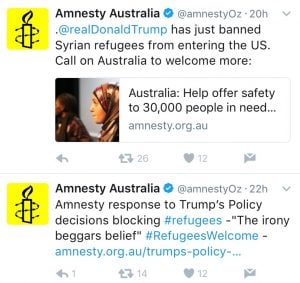 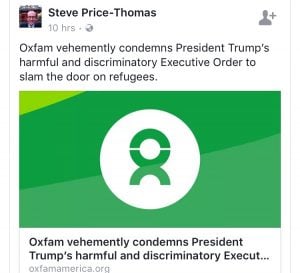 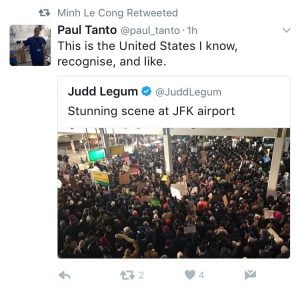 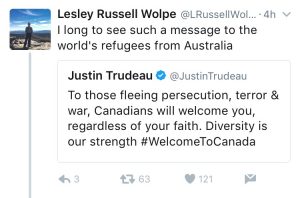 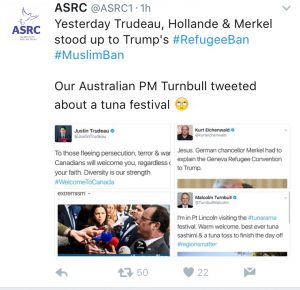 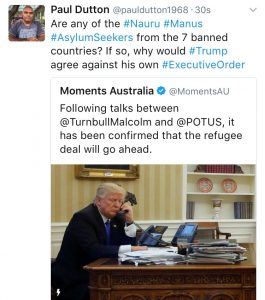 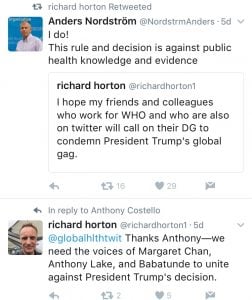 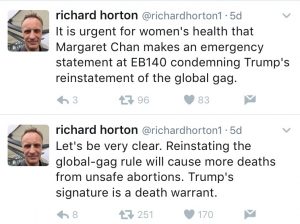 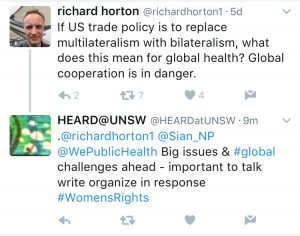 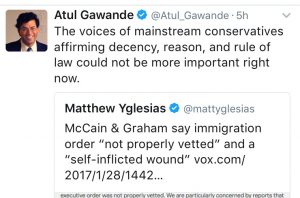 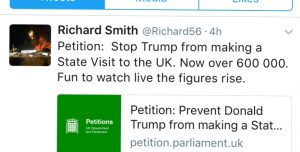 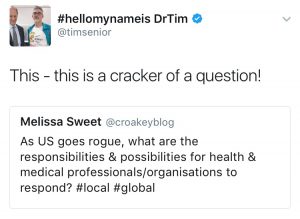 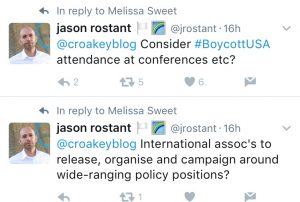 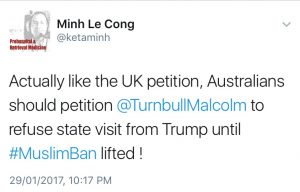 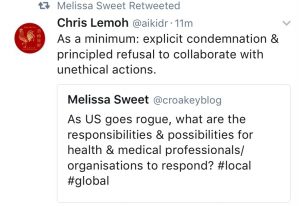 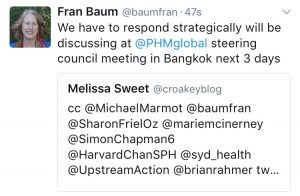 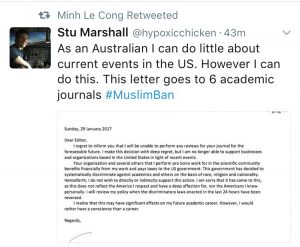