Australia’s health system faces many challenges, including waste and inefficiency, structural imbalances between public and private health insurance, and increasing supply and demand, according to speakers at a recent symposium in Canberra.

One of the questions underlying the event’s discussions seems to have been: are we better off investing efforts in system and financing reform – or focusing more on prevention and improving population health?

The challenges of sustainable, universal healthcare

In light of the recent debate surrounding the sustainability of universal healthcare in Australia in the current economic climate, the Deeble Institute held its inaugural symposium on Tuesday 24 September 2013 at Old Parliament House.

The symposium, entitled “Universal Healthcare and its challenges for the future”, provided a forum for expert speakers from both sides of the political spectrum to debate the problems with Australia’s health care system, and discuss some of the possible solutions.

As we know, health care expenditure is rising rapidly. Many argue that this means that current health care spending will be ‘unsustainable’ in the future. Not so says the Grattan Institute’s Health Program Director, Stephen Duckett.

In his presentation Professor Duckett argued that contrary to popular belief, the rising cost of health care in Australia is not caused primarily by population growth, population ageing and excessive health care inflation.

Instead, he argued that policymakers need to address causes in the ‘other’ category, such as waste and inefficiency in the health system, which are driving up expenditure. He warned in particular of going into a ‘sustainability panic’ and adopting panic type solutions to the problems in our health system today.

The World Health Organisation’s Vivian Lin put the Australian discussions about universal healthcare into context. She outlined a three-dimensional view of universal health care, explaining that its essential elements are: access to good quality health services, with financial protection, and overall equity and universality in its application.

She pointed out that universal healthcare is central to WHO’s objectives and remains relevant to all countries, including developed nations like Australia. Even though Australia has a universal health care system for almost 30 years, we must be vigilant and ensure that it remains so into the future.

What is wrong with Australia’s health system?

With this in mind, the symposium went on to consider the problems currently affecting Australia’s universal health care system.

The Director of the Deeble Institute for Health Policy Research, Anne-marie Boxall, explored the complexities of balancing public and private health insurance, and highlighted how successive governments had struggled to deal with the problems over time.

She explained that each successive government had tried and failed to find a sustainable balance between the two insurance schemes, making it a pressing problem for the new Coalition government to address at some point during its term.

Andrew Wilson, the Director of the Menzies Centre for Health Policy Research at The University of Sydney, went on to examine some of the major challenges in health service delivery in Australia: the pressure on emergency departments, elective surgery waiting lists, and cancer services.

He also pointed out the significant demand challenge Medicare faces as it looks toward the future: the more medicine can do, the more patients will expect, the more providers will want to do, and the more expensive health care becomes.

In setting the scene for discussions about potential solutions to these problems, Adrian Kay, from the Crawford School of Economic and Government at the Australian National University, provided a reality check for advocates.

He explained that the power of an idea, no matter how good, is rarely enough to get it over the line in the rough and tumble of politics. Instead, advocates need to play the long game and engage with the key interest groups in health care if they want to see their great ideas make it onto the political agenda.

What are the solutions?

In searching for viable reform options for the Australian health system, Just Stoelwinder from Monash University suggested that Australia look to international models, particularly that of Dutch health system where public and private health plans compete for customers. One of the key advantages of the Dutch health system is that there is a direct link between healthcare spending and growth in the economy.

Jeremy Sammut from the Centre for Independent Studies put forward an alternative model for reform. He argued that the solution to the problems currently facing universal healthcare in Australia lay in complementing the Medicare system with ‘health savings accounts’.

He acknowledged that the idea of ‘health savings accounts’ was somewhat heretical in Australia, but nonetheless put forward a case for how they could continue to ensure equity in the health system.

In contrast, Michael Moore from the Public Health Association of Australia argued that the solution to the current problems facing universal healthcare could be found using a more orthodox approach.

While acknowledging the challenge of reorienting the health system towards prevention, he argued strongly for a greater focus on population health and highlighted a number of priority areas where action could be taken now. 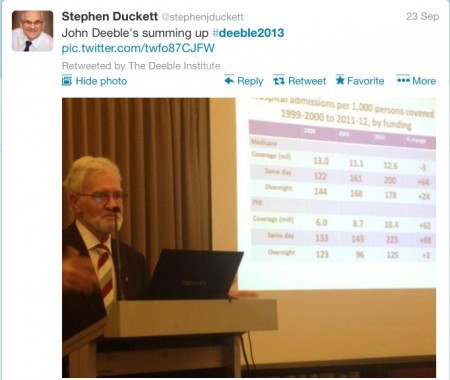 The final comments on the day were made by the Deeble Institute’s patron, Dr John Deeble.

As an architect of the Medicare system, Dr Deeble argued that solutions to the problems with Australia’s health system must not come solely from looking at overseas models.

While they provide useful ideas and information, Dr Deeble stated emphatically that imported solutions are not relevant because Medicare is uniquely Australian.

While it is clear that there are a number of issues that pose a threat to the sustainability of universal healthcare in Australia, it is through the gathering of minds such as those mentioned in this article that policy will hopefully be influenced, and in time, changed for the better.