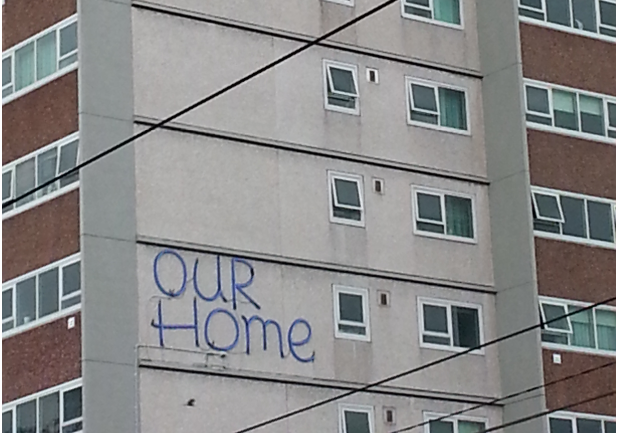 VicHealth is this week putting the spotlight on addressing a “pandemic” of social and health inequities through its Life and Health ReImagined initiative.

Join the webinar discussions from 2pm AEST on Wednesday (8 July), Equity during recovery – Addressing social and health inequities as we emerge from lockdown.

Marie McInerney previews the discussions below for the Croakey Conference News Service, which is covering the #HealthReImagined discussions over five weeks of webinars.

The COVID-19 pandemic is “acting as a magnifying glass”, highlighting and exacerbating widening socioeconomic and geographic inequalities that threaten to halt or reverse life expectancy gains in Australia, according to leading researchers.

Professors Sharon Friel and Fran Baum, like other public health and social policy experts around the world, are calling on governments to show courage in responding to the pandemic, warning that austerity responses to previous social and economic crises have inflicted great harm.

In a paper written for a VicHealth webinar this week on health equity, they say older people, poor and marginalised racial and ethnic groups are bearing disproportionate health impacts of the pandemic due to underlying health conditions, in Australia as elsewhere.

But they warn that focusing on the ‘vulnerability’ of disease risk or death among particular groups “obfuscates the social, economic, and political factors” behind those higher tolls.

“The impact of COVID-19 and government responses to it are not felt equally across society because of the underlying inequities in everyday life,” say Friel, from the Menzies Centre for Health Governance at the Australian National University and Baum, from Flinders University’s Southgate Institute for Society, Equity and Health.

Those everyday inequities are now being exacerbated for more than 3,000 residents of nine crowded public housing towers in Melbourne, who were put into hard lockdown on the weekend – without notice, under police guard, and unable to leave home for at least five days even to buy food.

The hard lockdown is the harshest action taken in the general community so far in Australia to stem the spread of the coronavirus and is shining a spotlight on concerns residents and advocates have been raising for weeks that their living conditions are a “magnet” for the coronavirus.

Lack of access to decent housing has put thousands of low income Victorians, many who cannot access sick leave, “at a shocking level of risk during the COVID-19 pandemic”, according to Jenny Smith, CEO of the Council to Homeless Persons, Victoria’s peak homelessness organisation.

Smith warned that 35,000 Victorians live in housing that is crowded or has shared facilities, like bathrooms, laundries and kitchens – not only in public housing towers, but boarding houses, caravan parks and other crowded dwellings.

Many of these, she said, are the workers the community relies on to work in close contact — in abattoirs, to pack shelves, drive deliveries, to clean or provide personal care or security.

“This pandemic has brought home some hard truths,” she said. One is that “our housing is critical to our health”.

Sir Michael Marmot, who will also speak at this week’s VicHealth webinar, recently delivered a ten-year update to the landmark 2010 study Fair Society, Healthy Lives (The Marmot Review) that found many people were dying prematurely because of societal inequalities.

The update found that life expectancy actually fell through that decade in the most deprived communities outside London for women, and in some regions for men.

“Regressive and inequitable” austerity spending cuts from 2010 had been the main culprit, falling most heavily in areas where need was highest and conditions were generally worse, he said.

Life expectancy at birth also took a worrying turn backwards in the United States from 2015-17, as the opioid epidemic took its toll. This was first outright decline since 1993, during the AIDS epidemic.

Now there are fears that Australia is on the same trajectory.

Dr Tim Adair, from the University of Melbourne’s Global Burden of Disease Group, told Croakey that while there have been periods where growth in life expectancy in Australia has been slower, particularly when “smoking really reached its peak”, there’s been an expectation it will continue to rise.

“For that to slow, or to actually reverse is quite alarming,” he said.

In May, Adair and his colleague Professor Alan Lopez published the results of a study  showing that socioeconomic and geographical inequalities are contributing to a “stagnation” of Australian life expectancy.

Analysing Australian death registration data from 2006-2016, they found people aged 35-74 in the poorest areas in Australia were twice as likely to die prematurely as those in the wealthiest areas.

People living in outer regional, remote and very remote areas had premature death rates about 40 percent higher than those in major cities – a gap that was also increasing, they said.

The study said adverse health behaviours that are more prevalent among lower socioeconomic groups, such as smoking, poor diet and alcohol consumption, may explain much of the widening socioeconomic gap in mortality rates, along with inequalities in access to health care.

But Adair and Lopez said the social and structural determinants of health, including housing, employment and transport, needed to be addressed alongside treatment and prevention of disease.

They warned that reducing inequities in rates of premature death will require a major policy effort. Without it, “the COVID-19 pandemic will likely turn this widening gap into a chasm”.

That worrying trend comes as National Cabinet is set this month consider the historic National Agreement on Closing the Gap negotiated over the past year by governments with the Coalition of Peaks, representing more than 50 Aboriginal and Torres Strait Islander organisations.

Their communique, released last week, does not provide details but says there will be 16 national socio-economic targets for Aboriginal and Torres Strait Islander people in areas including education, employment, health and wellbeing, justice, safety, housing, land and waters, and languages, with the goal to “reach parity” with non-Indigenous Australians.

The National Aboriginal and Torres Strait Islander Legal Services (NATSILS) last week urged immediate action to close the gap on incarceration rates within ten years – not by the end of the century as a leaked version of the agreement reportedly contained.

For Karl Briscoe, CEO of the National Aboriginal and Torres Strait Islander Health Worker Association (NATSIHWA) and a member of the Coalition, it is the four priorities outlined in the agreement  – prioritising Indigenous-led decision making, community-controlled services, improved accountability and reliable local data – that will make the difference.

A Kuku Yalanji man, Briscoe says it’s been no surprise to him that community controlled organisations like the Apunipima Cape York Health Council in Cairns took the lead in pandemic responses.

“It’s second nature to them,” he said of Apunipima’s experience and success in responding to other emergencies like cyclones and infectious skin diseases.

For example, the Australian Indigenous Doctors Association (AIDA) had been forced to issue a warning during the pandemic about racism in the healthcare system – prompting a welcome condemnation of culturally unsafe care by the Australian Health Practitioner Regulation Agency (Ahpra).

The risk to the Indigenous workforce was also exposed when Prime Minister Scott Morrison, earlier in the pandemic, identified the most at risk groups: all Australians aged over 70, those with a chronic illness aged over 60, and Aboriginal and Torres Strait Islander people aged over 50.

“I was told by one region that would mean 50 percent of their workforce if they applied the rule,” said Briscoe, who has been calling for greater support for the Indigenous health workforce, including greater access to telehealth (for the sake of workers as well as patients).

The effective leadership of the Aboriginal community controlled sector is one of the successful responses to the pandemic highlighted by Friel and Baum in their paper as they consider whether the pandemic might lead to changes that promote greater health equity.

They say COVID-19 has made it very clear that publicly funded and managed health systems are the most effective and efficient and that Australia’s health system responded well to the crisis, albeit where shortages of testing and personal protective equipment highlighted issues with the ’just-in-time’ manufacturing approach justified for cost saving.

Health care interventions like telehealth have also worked but will also widen health inequities if Australia does not deliver equitable access to high-speed broadband telecommunications, they warn.

But they say it’s been the previously “unthinkable” measures taken “beyond the health care system” by the Coalition Government – decent welfare support for many, though not all, through Job Keeper and Job Seeker and free child care – that have offered “glimmers of hope”.

“They’re not perfect by any means, but if they were maintained, they could go an awful long way to improving health equity,” Friel told Croakey.

But rather than further action to address the structural drivers of inequities, Friel said we are instead seeing worrying signs of back to business as usual from the Government.

Among the concerns are its determination to cut back Job Seeker and Job Keeper supports from September, the return to child care fees, rising fees for humanities at universities, the inequitable Home Builder Program as a major stimulus plank, and last week’s news of an aggressive and costly defence strategy. 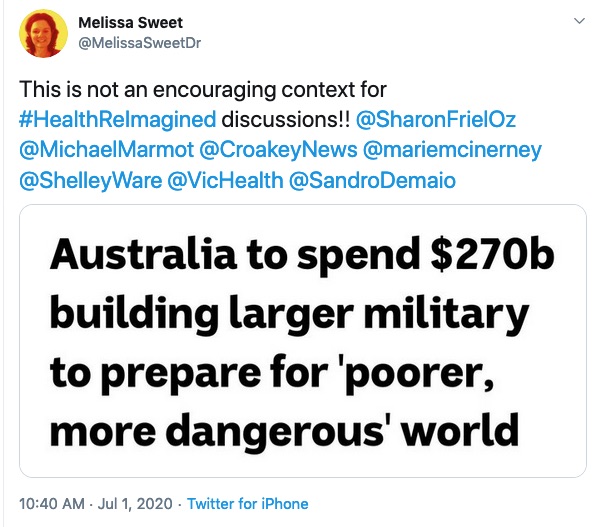 The Prime Minister’s announcement on defence, that “even as we stare down COVID pandemic at home, we need to also prepare for a post-COVID world that is poorer, that is more dangerous, and that is more disorderly”, is a worry, Friel said.

“[It’s] in such stark contrast to the sorts of courageous, collaborative leadership that we need to actually address some of these social and health inequities.”

Friel and Baum are also concerned about the “jobs at all cost” focus of the new National Cabinet, highlighting instead calls from the social sector and energy industry to pivot the Home Builder program to a National Low Income Energy Productivity Program that would create “shovel ready jobs”, cut energy bills for low income households, and reduce carbon emissions.

“Jobs matter for health, but the types of jobs and who gets them can cause social inequities to widen, which flow through to affect health inequities,” they write.

One of its tasks will be to conduct research into how policy action in low, middle and high income countries in a wide range of sectors that deal with social determinants of health contributes to a country’s capacity to ‘punch above its weight’ to produce better than expected life expectancy outcomes relative to national income.

The early signs are not good. Working with the South Australian Council of Social Service (SACOSS), Baum’s team earlier this year published a report finding that the rate of premature deaths in the poorest areas of South Australia is now more than double the rate in the most advantaged areas, with health inequities there growing faster than elsewhere in Australia.

With the added crisis of COVID-19, Baum predicts that life expectancy in Australia will begin to decline in the next five years, “unless we do something about the growth of inequities”.

“We’re getting less equal,” she said. 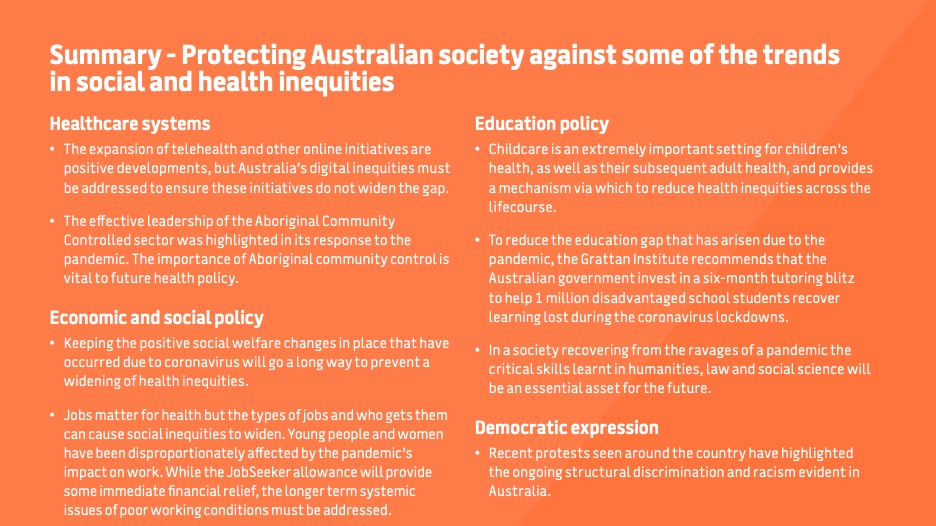 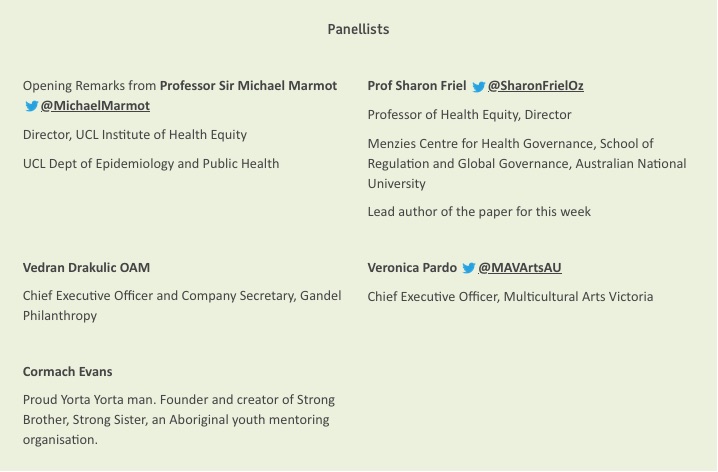 So far, 503 Twitter accounts have been participating in the #HealthReImagined discussions, sending 2,696 tweets, and creating more than 28 million Twitter impressions, according to Symplur analytics. Read the Twitter transcript here. 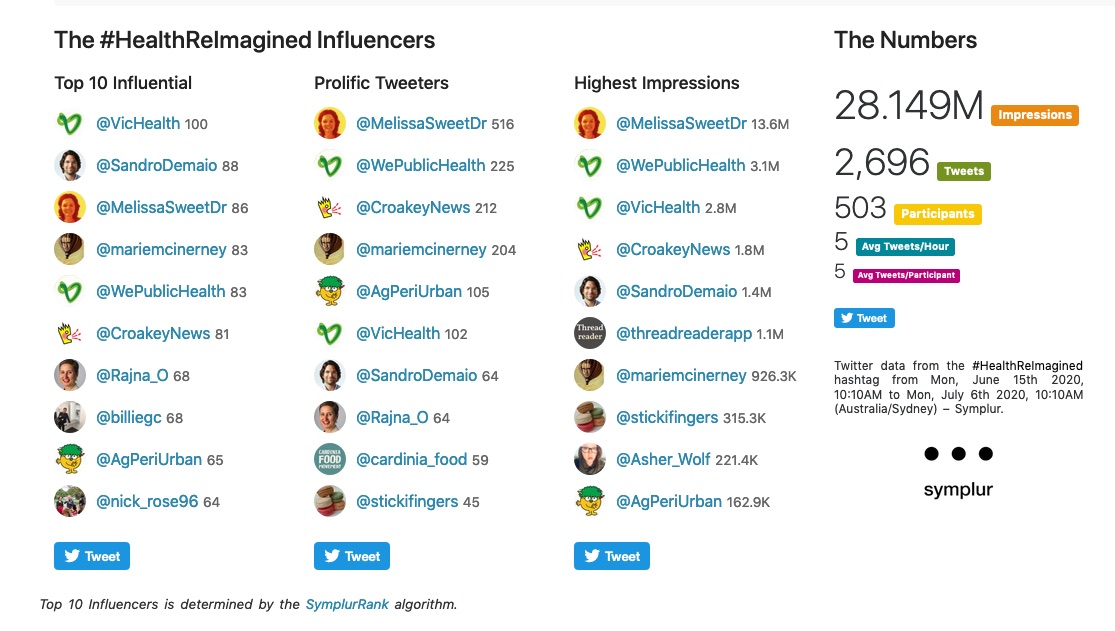