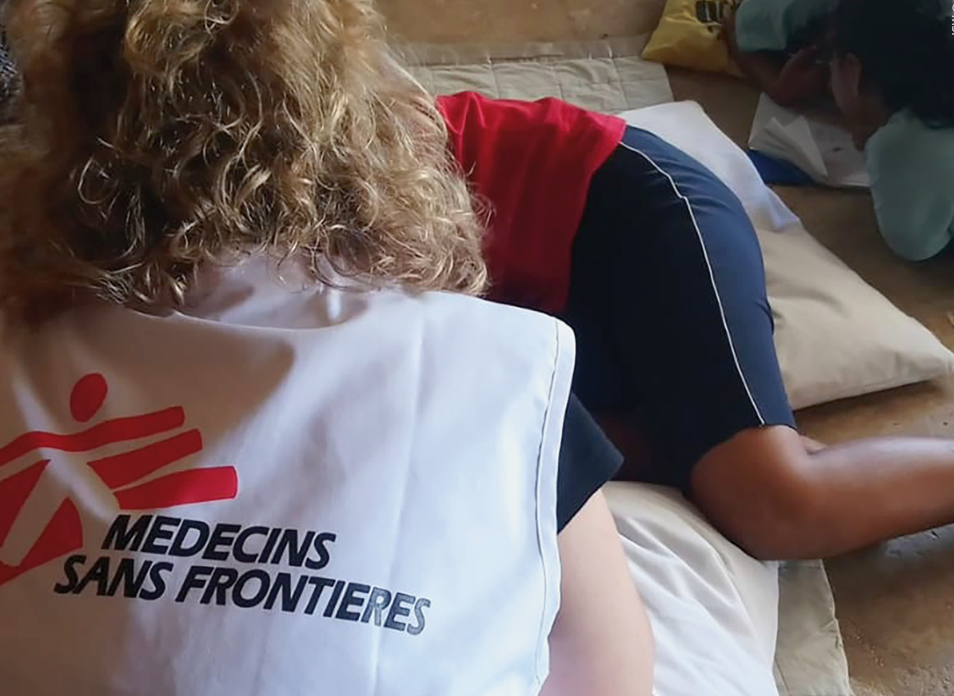 Image from the report: Indefinite Despair: The tragic mental health consequences of offshore processing on Nauru published in December 2018 by Médecins Sans Frontières

The Federal Government has ramped up the rhetoric on asylum seekers and border control in the wake of the passage of hard fought amendments that allow for the medical evacuation of asylum seekers from Manus Island and Nauru.

Among other claims, Prime Minister Scott Morrison and a host of frontbenchers railed that the amendments would send a signal to people smugglers to start up their business again and that some asylum seekers would be a security threat if allowed into Australia for medical treatment.

Morrison announced the government would re-open the Christmas Island detention centre to prepare for the prospect of new arrivals and would repeal the legislation if the Coalition wins the upcoming federal election.

In the post below, originally published at The Conversation, Nicholas Procter and Mary Anne Kenny, provide a clear explainer on how the ‘medevac’ bill will apply and three cases as to why it was needed.

Procter is Professor and Chair, Mental Health Nursing, at the University of South Australia and Kenny is Associate Professor at Murdoch University’s School of Law.

Both the House of Representatives and the Senate have now passed amendments to the Migration Act 1958 that allow for the medical evacuation of asylum-seekers from Manus Island and Nauru. These amendments are also known as the medevac bill.

So, how will the situation for asylum seekers and refugees on Manus Island and Nauru change with the provisions in place?

Read more: The government was defeated on the ‘medevac’ bill, but that does not mean the end of the government

What’s in the Bill?

The medevac bill allows for the transfer of asylum seekers or refugees on Nauru or Manus Island to Australia for “medical or psychiatric assessment or treatment”. Family members will also be transferred if recommended.

It gives a clear pathway for medical specialists to make medical decisions. Two doctors must assess – either in person or remotely – the person and make the recommendation for transfer. The criteria used in the initial assessment and in any review is that the person:

The minister may also refuse the recommendation on the basis he does not accept the transfer is necessary on medical grounds. In those cases an expert medical panel – known as the Independent Health Advice Panel (IHAP) – would be formed to reassess the recommended transfer.

If the panel recommends the person’s transfer should be approved, the minister must transfer the person unless satisfied there are security or character grounds for refusing the transfer.

The panel will consist of at least eight members, including the Chief Medical Officer for the government, the Department of Home Affair’s Chief Medical Officer and the Surgeon-General of the Australian Border Force. Other members would be appointed by the minister based on nominations by various professional medical bodies.

Medical transfers to Australia are for a temporary period only, so those currently in Australia could still be returned to Nauru or Manus Island following their treatment. This will continue to be the case even now this bill is passed.

These procedures are only applicable to asylum seekers and refugees who are on Nauru and Manus Island currently. The law will not apply to anyone who comes after the passage of this bill. Anyone brought to Australia for medical treatment must be kept in onshore immigration detention.

Medical transfers that have occurred to date are mostly for psychiatric reasons or a combination of psychiatric and other medical reasons. The importance of provided, rapid medical assessment and response to critically ill, or at-risk-of-dying, refugees and asylum seekers cannot be overstated.

In August, 2014 a 24-year-old Iranian detainee on Manus Island, Hamid Khazaei, fell ill and presented to clinicians at the detention centre with “flu-like symptoms” and a small lesion on his leg. After a course of antibiotics, his condition deteriorated and he was transferred to a hospital in Papua New Guinea. He died a few days later.

A coronial inquest identified ambiguous and deficient policies for emergency evacuation, finding Mr Khazaei’s death was preventable. If his clinical deterioration was recognised and responded to in a timely manner, and he was evacuated to Australia within 24 hours of developing severe sepsis, Khazaei could have survived.

Medical evacuations are time sensitive because of the nature of the emergency and the logistics of the transfer itself. Were the provisions of the medevac bill in place at the time, independent expert overview of clinical decisions could have saved Khazaei’s life.

Another case was that of a refugee woman on Nauru who attempted suicide. An order was made for her to be urgently transferred to Australia. This was based on reports from a psychiatrist and a surgeon who expressed concerns that, without urgent surgical intervention, she could develop peritonitis (a life-threatening inflammation resulting from her suicide attempt) and die.

This case was heard by the Federal Court within four days of her attempt. Evidence demonstrated she needed complicated surgical intervention and psychiatric care that appeared not to be available on Nauru. Medical evacuation to Australia was requested as soon as possible, and the woman was brought to Australia.

With the medevac provisions in place, the woman could have been brought to Australia earlier for an independent assessment of her physical and mental health prior to her situation deteriorating to a point where emergency management was required. The costs and delays involved in seeking intervention of the courts to order medical evacuations would also have been reduced with the provisions in place.

Another recent case involved a 46-year-old refugee on Manus Island who had lost vision in his right eye after a traumatic injury during a riot on the island. Vision in his left eye was also deteriorating and there was a lack of appropriate treatment in PNG. His mental health had also deteriorated to a point where he was assessed as being at high risk of suicide.

The evidence was that Manus Island did not have adequate facilities to treat his physical deterioration and suicidality. The court ordered his transfer to Australia as soon as possible for assessment and treatment.

Again, this man could have been brought to Australia earlier for an independent assessment, prior to emergency life saving treatment being required. The bill’s provisions will now allow for this. This translates to continuity and consistency of care and reduced deadlocks over treatment decisions.

Aside from being a circuit breaker to current arrangements, the bill is a new opportunity to establish agreed governance arrangements and a clinical pathway for recognising and responding to medical need without political interference. In the past bureaucrats and politicians have invalidated medical evidence and clinical decision making processes.

To provide safe and high quality care to refugees and asylum seekers based on medically assessed need, independent medical experts must be provided with all available relevant information about the patient. Giving the best medical and health advice must be free from delay and political interference.