Exposing the many ways that racism affects children and young people

“Why do you think that’s the nice doll?”

This heart-wrenching 2007 video explores the self-image of black children in the United States by repeating the historic doll test of Dr Kenneth Clark that led to school desegregation.

We learn that 15 out of 21 black children prefer the white doll and we can see the distressing realisation on one little girl’s face when she is asked which one, the “good” or the “bad” doll, looks most like her.

US epidemiology professor Dr David Chae says the video may hold a vital clue to why there is such a significant health disparity between black and white Americans that could also apply to closing the gap in health outcomes between Indigenous and non-Indigenous Australians.

“I think this video illustrates quite poignantly that even at this very early age, kids already understand what it means to be black and have already begun to internalise these perceptions,” he told a recent symposium on the impact of racism on child health.

“This is one of the more insidious consequences of racism: internalised racism, the acceptance of negative socio-cultural values about the intrinsic worth of one racial group. This is an often overlooked dimension of racism which undoubtedly does impact one’s health.”

Chae was lead investigator in recent research at the University of Maryland’s school of public health which suggests that racial discrimination and internalised racism are not only bad for mental health, but actually accelerate ageing at the cellular level. “It literally makes people old,” he said.

The study, which the researchers say is the first to link racism related factors and biological ageing, examined 92 African American men between 30-50 years of age. They were asked about their experiences of discrimination in different places, including at work, shopping and in interactions with police.

They also measured their implicit racial bias using the Black-White Implicit Association Test, which  gauges unconscious attitudes about race that people may be unaware of or unwilling to report, and which shows that about 50 per cent of black Americans hold anti-black bias.

The study then examined the participants’ DNA, specifically the length of their telomeres, which are – he explained – repetition sequences of DNA at the end of chromosomes that shorten as one gets older, “like the plastic tabs on shoelaces that fray over time”.

A biomarker of systemic aging or more colloquially “a measure of the body’s wear and tear”, he said telomeres shorten more rapidly under conditions of high psychosocial and physiological stress. Shorter telomere length is associated with increased risk of premature death and chronic disease such as diabetes, dementia, stroke and heart disease.

“We found that the African American men who experienced greater racial discrimination and who displayed a stronger bias against their own racial group had the shortest telomeres of those studied,” he said.

The good news, Chae said, was that having a “pro black bias” can potentially serve as a buffer. He outlined results from another study that looked at the allostatic load, or again the “wear and tear on the body” from repeated or chronic stress among rural African American adolescents.

Dr Carrington Shepherd, from the Centre for Research Excellence in Aboriginal Health and Wellbeing at West Australia’s Telethon Kids Institute, said that while some studies of the impact of racism on health in Australia have focused on systemic racism, “virtually none” have looked at internalised racism.

Shepherd and others at the symposium said Australia is lagging in its overall research on the health impacts of racism, particularly child health.

Pat Anderson, chair of the Lowitja Institute, said the country pays only lip service to the growing evidence that exists. “Sadly people kind of give you polite space, then move on to the next thing,” she said in her opening speech.

Shepherd said a systematic review by Australian researchers identified 121 international studies examining the connection between racism and child health in general. The results, he said, were “striking”, showing it affects health “from the very start of life”, in pregnancy and birth outcomes.

However, he had been able to track only four quantitative studies that had considered racism and the health of Aboriginal and Torres Strait islander children.

That research base compares poorly to work that UK researcher Dr Laia Becares, from the University of Manchester, is able to undertake in a three-year research project into health inequalities experienced by ethnic minorities in the UK, US and New Zealand (NZ).

Currently looking at the impact of maternal experiences of racism and the level of racism in the local neighbourhood on child health, Becares is able to draw on the UK Millenium Cohort Study which has been following the lives of around 19,000 children born in the UK in 2000-01.

It has so far collected data when its cohort members were 9 months, 3 years, 5 years, 7 years, and 11 years, with an over sample of ethnically mixed and disadvantaged areas. Among the questions it now asks are:

By contrast, Australia’s Census asks only place of birth and what language a person speaks. “It is very difficult to document racial and ethnic inequalities if you don’t collect good data, with racial and ethnic background as a basic requirement,” said symposium organiser Dr Naomi Priest, Senior Research Fellow at Deakin University and at the University of Melbourne.

Shepherd said it had become increasingly clear in his research that racism is a “pivotal” determinant of health and why an expanded research agenda was needed in the field to examine both direct and indirect impacts within a broader Aboriginal population health framework (below). 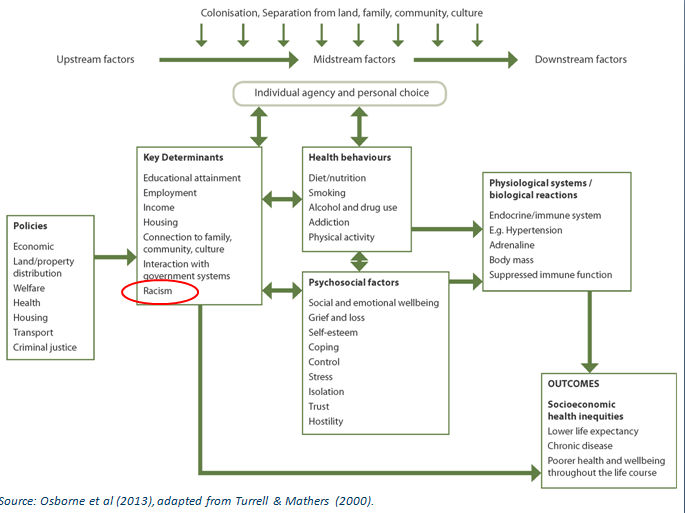 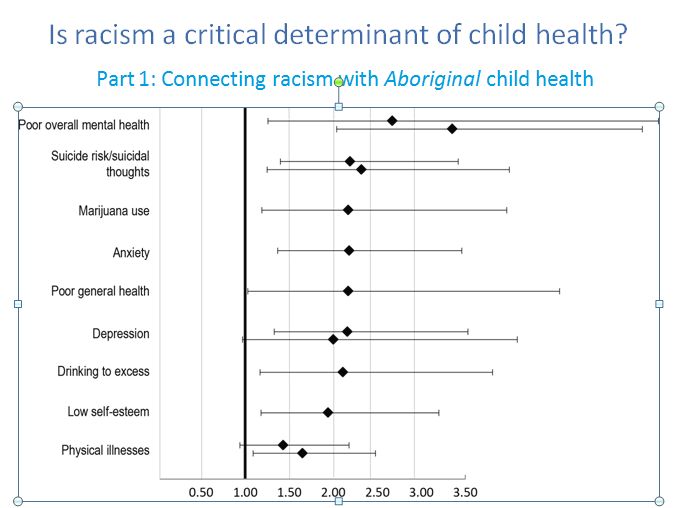 The pathways to that impact included:

Children’s health can also be impacted by the stress of racism on their carers, including in utero where it can lead to pre-term birth and low birthweight.

Shepherd’s doctorate examined the role of socioeconomic factors on the health and development of Aboriginal people – one of the few studies internationally to explicitly look at the socioeconomic patterning of health in an Indigenous population.

“At one level, it is very easy to become overwhelmed by Indigenous health statistics, not only the data itself but also the immensely complex interconnectedness of health problems, health risk factors and social issues.

At another level, Indigenous health problems are not complex to understand at all. If you step back from the tangled web of data and statistics, what you are really looking at is poverty.

If we only achieved two things – eliminating poverty and eliminating smoking – we would close the gap in Indigenous health for good.”

Shepherd said his investigations of the impact of socioeconomic factors on child health “continually implicated racism as an important pathway between socio economic status and health”.

Socioeconomic factors can improve child health, he said, but they “won’t overcome the appalling gaps” that exist between Indigenous and non Indigenous Australians because racism, stress, and the intergenerational impacts of colonisation are “significant population wide restraints”. 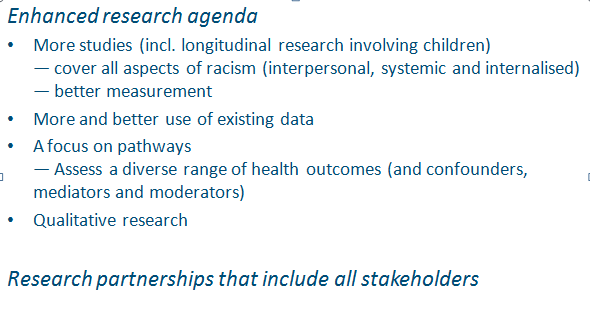 • The Croakey Conference Reporting Service coverage of the symposium is compiled here.

PrevPrevious‘We need to get past the myth that everything significant on this continent began in 1788’
NextCounting the mental health toll: fallout from the Federal BudgetNext