Some of the people sharing the #AHMRC16 news on Twitter

Facebook – a powerful tool for health promotion in Koori communities

“It’s like word of mouth or the Koori Grapevine, but on steroids!”

That is the verdict from James Sheather from the Armajun Aboriginal Health Service in northern New South Wales on the role of Facebook in health promotion for Aboriginal and Torres Strait Islander people.

He was speaking at a session on social media on the opening day of the Tackling Tobacco and Chronic Conditions conference, which is being hosted this week by the Aboriginal Health and Medical Research Council of New South Wales in Sydney.

There was an immediate example at the conference, as the Tharawal Aboriginal Corporation, with AH&MRC support, had just launched a series of 15-second video clips on its Facebook page.

They are part of a targeted social media campaign for young Aboriginal people to prevent the uptake of smoking, which is still the most preventable cause of early mortality and ill health in Aboriginal people.

“We launched it yesterday and we’ve already had a 5,000 reach for the clip,” said Dolie Ufi. Another had notched up 1,000 views, she said.

As part of the Youth Film Tobacco Action Project, the mini clips have been developed in consultation with about 13 young Aboriginal people – some were smokers, some had quit, others had never smoked.

Their feedback shaped the content of the clips – which don’t even touch on the adverse health impacts of smoking, but rather the cost of cigarettes and how it stops smokers from buying or enjoying other things.

“Playing with smokes can leave you broke,” was the punch line for one. It pointed out that smoking could cost more than an expensive smart phone, and the Facebook post featuring it also included a link to this online calculator to see how much someone can save by giving up smoking (see pictures at bottom of post).

Key to their impact, they believe, is the input of young people about content and that they star local people too.

“You know those really annoying ads you get on your Facebook page?” she told delegates. “That will be us!”

The conference also saw some great clips and promotions from the READY (as in: Really Evaluate and Decide Yourself Make Ourselves Better) MOB Tackling Smoking and Healthy Lifestyles team from the Galambila, Durri and Werrin Aboriginal Medical Services at Coffs Harbour, Kempsey and Port Macquarie. (See photos and tweets at the bottom of this post and watch the clip below).

And there was news about the development of the Can’t Even Quit app, being managed by the George Institute for Global Health.

Project manager Lachlan Wright said the “Aboriginal specific app” has been designed by Aboriginal people who are current or ex smokers and he thinks it’s like nothing else on the market.

It can be downloaded on cheap mobile phones and has a huge range of different motivational messages which have been adapted for Aboriginal people from Cancer Council Victoria messages. “I’ve been testing it for three months and I’ve never got the same one twice,” he said.

But it’s number one difference, he says, is its My Challenges function, which allows the user to put a whole series of challenges to family and friends, from just delaying the first cigarette a day, to not smoking at work, through to quitting altogether.

Wright says that taps into how smoking is such a “communal thing” in Aboriginal and Torres Strait Islander communities.

“You’re not going to get rid of it by focusing on the individual,” he said. “You’ve got to focus on the family group, the household, the extended mob. That’s what we think is going to be different with this app to any other app that’s out there.”

Big funding cuts and changing government policies have had an impact, and the head of the Tackling Indigenous Smoking initiative Professor Tom Calma has conceded Australia won’t meet its target to halve 2008 Indigenous smoking levels by 2018.

Still, James Sheather is a big believer in the power of social media to bring about social change or support.

He told Croakey said he was already confident that Facebook would be the key to connecting with Aboriginal people in the area when his organisation began to step up its online presence this year.

But even he was blown away to get more than 10,000 hits on a post that aimed to raise money for a funeral following a suicide in the area.

Fundraising efforts that included a special touch football event organised within a week went on to raise more than $6,000 for the family – a big achievement in an area with roughly 2,000 Aboriginal people in the community.

“It was unbelievable, it all just took off, and showed us how the community wanted to be involved and how to best connect with them,” he told Croakey.

He told a panel discussion at the conference that Armajun’s board had been hesitant about engaging too heavily in social media, concerned about the potential for negative responses.

But they began to swing around when they saw that staffers were directly boosting attendance numbers when they used their personal Facebook account to promote events.

Asked about negative social media experiences, he said trouble loomed once when the organisation posted a vacancy for Aboriginal traineeships, which attracted complaints about “why aren’t these jobs for everybody” from one non-Aboriginal woman.

“The best thing,” Sheather said, “is everyone got on there and told her why. She got a bit of education from her friends and the community. It sorted itself out.” 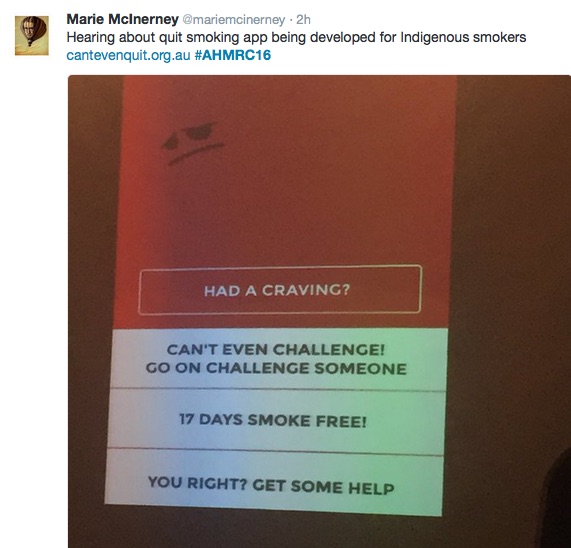 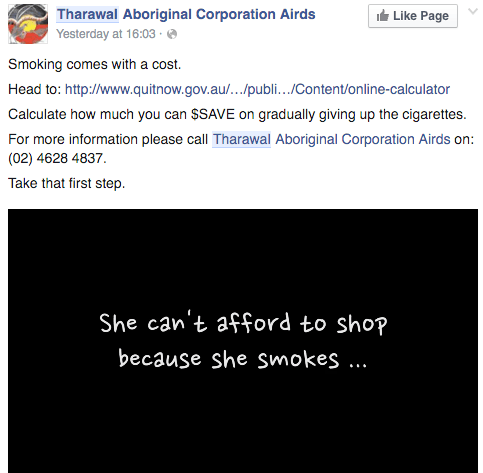 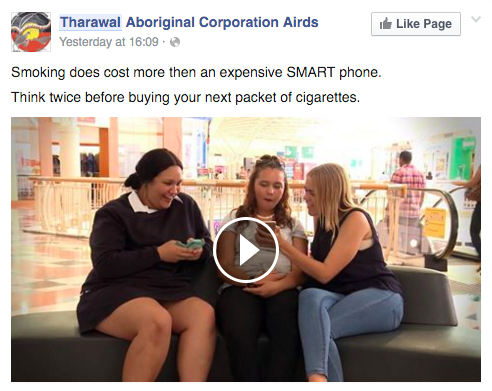 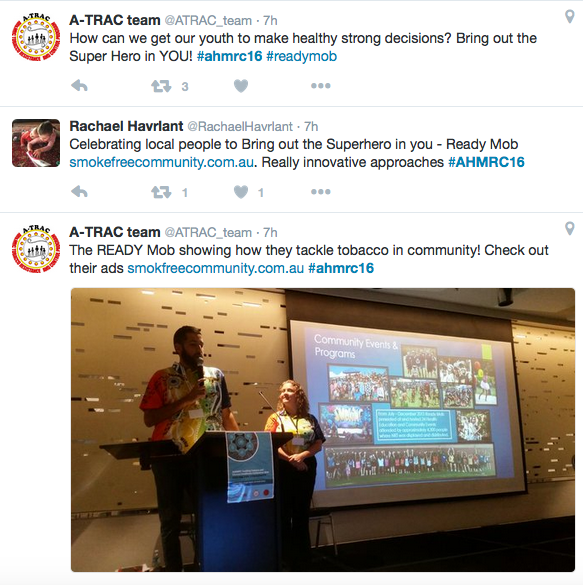 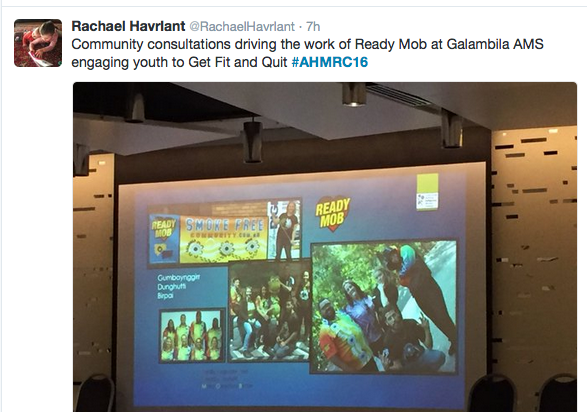 • Thanks to all who have been tweeting from #AHMRC16 – check the Symplur analytics. The analytics below are from 1 May – morning of 3 May. 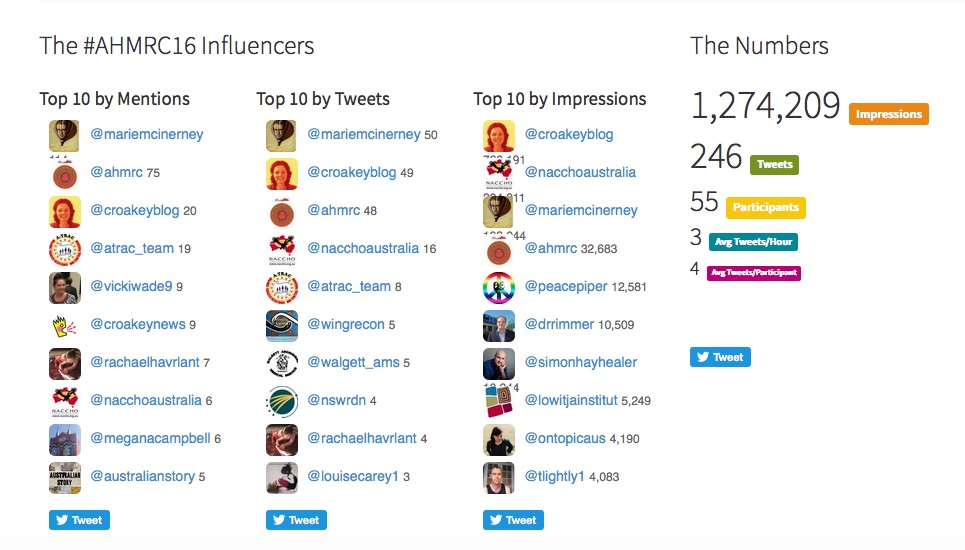 • Marie McInerney is covering the #AHMRC16 conference for the Croakey Conference News Service. Stay tuned for more reports, and bookmark this link to follow the coverage. On Twitter, follow #AHMRC16.