A threat to public health. Image by Gerd Altmann from Pixabay

Public health experts in Australia were on Thursday horrified by Facebook’s decision – in the midst of the coronavirus pandemic – to block Australian users from seeing or sharing Australian news over its opposition to having to pay news media outlets for content.

Vaccine expert Professor Julie Leask said on Twitter it was “breathtaking hypocrisy from Facebook” to censor anti-vaccination content ‘for public health’ at the same time as restricting user’s access to local news “at the start of a vaccine rollout, when it’s needed the most”.

Media outlets and others were reporting that emergency services, government health departments and agencies, including the Bureau of Meteorology, Fire and Rescue NSW, Queensland Health, Sydney Local Health District and Western Sydney Health were caught up in Facebook’s move.

So too were multiple health and community services, putting at risk critical public health responses in the pandemic, particularly for Aboriginal and Torres Strait Islander communities.

AMSANT, the Aboriginal Medical Services Alliance Northern Territory, tweeted concerns that “weeks out from a huge effort to vaccinate people living in remote communities across the NT, Aboriginal health and media organisations’ FB pages look to have been shut down as part of all this”. 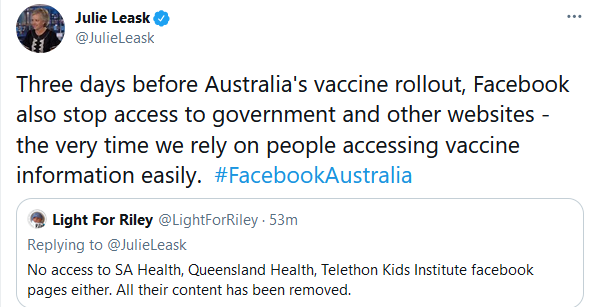 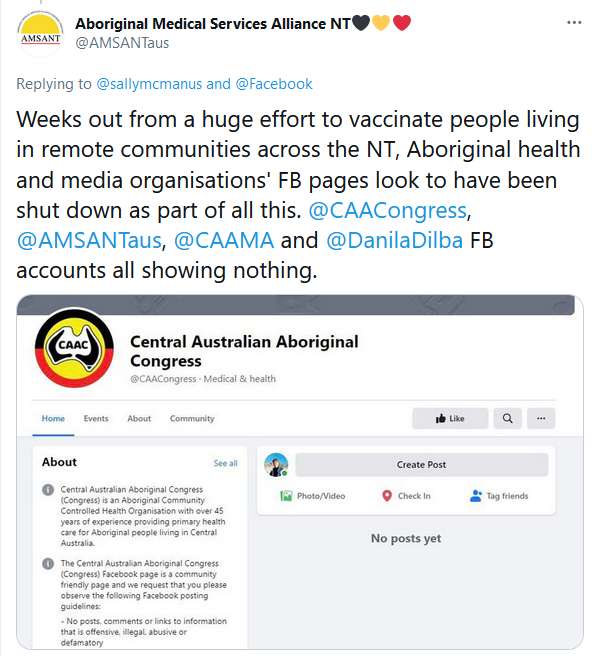 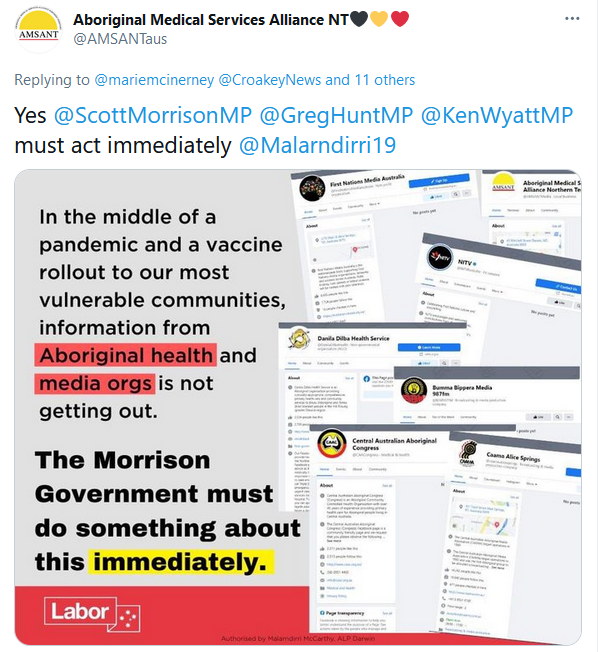 In a statement, Public Interest Journalism Initiative (PIJI) Chair Professor Allan Fels said it was “unconscionable” for Facebook to limit access to critical official information and that its action put under question its “social license to operate”.

Fels, a former Chair of the Australian Competition and Consumer Commission (ACCC), said it was not unusual for market participants to threaten withdrawal or restriction of services in the face of market regulation, however he urged Facebook “to be cautious”.

“It is unconscionable for Facebook to limit access to Australian Government information, be it weather, health or bushfire information,” he said. “This is not ‘news’, nor content envisaged under the Mandatory News Media Bargaining Code.”

Fels said the Code, which passed the Senate overnight, seeks to address a “significant market power imbalance”, as is the role of the ACCC and government, to ensure a level playing field.

“Currently, more than 80% of online advertising is directed to digital platforms, which have previously demonstrated a lack of willingness to negotiate with news organisations around the value of their content in the generation of this revenue,” he said.

“The costs of producing public interest journalism are high, but it is integral to the functioning of any working democracy.”

Warning that we are living in an “era of misinformation and disinformation, or should I say, ‘fake news’”, Fels urged Facebook “to sit at the table and negotiate in good faith, as Google appears to be doing”.

PIJI also noted the Australian Government has asked the digital industry to develop a code of practice on how they address disinformation, which was due to be released within weeks by the Digital Industry Group Inc (DIGI).

“(Facebook’s) announcement seems to run counter to community sentiment for tech giants to act in good faith and demonstrate their social license to operate,” Fels said.

This is a rolling post of responses to Facebook’s decision, which highlights the risks to public health of the monopolies established by the digital media giants. See its announcement of the move.

Alison Verhoeven, CEO of the Australian Healthcare and Hospitals Association, warned at Croakey on Wednesday that self-regulation by corporations such as Facebook and Google will not address the worrying health threat of disinformation, calling for political leadership to address the “rampant” spread of disinformation.

Croakey has published a number of stories recently about the public health risks posed by the tech giants, including by the mandatory payment code for media brought in by the Federal Government, raising broader concerns for health and democracy:

Regulation of digital platforms may be world-leading, but it’s no panacea

“Corporate bullying at its worst”

In a statement, he said the world is battling the COVID-19 crisis, and Australia is days away from beginning the biggest mass vaccination program in our nation’s history.

“Yet, to save itself from having to pay a few million dollars to Australian news organisations for the work their journalists do, Facebook has decided to punish all Australians by removing their access to news on its platform,” he said.

“This irresponsible action – taken with no notice – has clearly had unintended consequences, with some health department pages taken down, but not others; with people unable to access the Bureau of Meteorology’s page on a day of bushfire and flood warnings.”

“Facebook play a huge part in the lives of ordinary Australians and the company must take its responsibilities seriously.

“It is truly ironic that Facebook has allowed health misinformation to be spread via its platform throughout this pandemic, yet today much of this misinformation remains on Facebook while official information sources are blocked.

“The AMA calls on Facebook to restore public access to official information, and to stop putting the health of Australians at risk in order to bully the Australian Government.”

The Royal Australasian College of Physicians also issues a statement, saying it is concerned that Facebook has taken down its Facebook page in the middle of a global pandemic, saying it was a “poorly executed decision” and that the withdrawal of a major communication tool for the vaccination roll-out “can only be described as devastating”.

“It would be irresponsible to remove access to critical information shared by health agencies during such a difficult time when the community needs the highest standards of care we can deliver,” said RACP President, Professor John Wilson.

“Our nation is on the brink of an unprecedented vaccination rollout program, where health communications are vital to ensure public confidence in the vaccine and healthcare worker awareness of strategy.

“In addition, our training doctors are dependent on information we provide on social media to support them through their very disrupted assessments.

“Facebook’s decision today couldn’t come at a worse time,” he said urging Facebook to reinstate the RACP’s Facebook page and those of other healthcare and community organisations.

Alison Verhoeven, CEO Australian Healthcare and Hospitals Association (AHHA) said the action by Facebook that has blocked many hospital and health service pages as well as Australian and international news sites just as the COVID vaccine rollout is beginning was “taking corporate irresponsibility to a new level”.

“Having allowed fake news and misinformation about COVID to proliferate on Facebook, including on the pages of federal MPs such as Craig Kelly, the decision to block legitimate news outlets is hypocritical to say the least,” Verhoeven told Croakey.

“Mark Zuckerberg and his wife, a paediatrician, contributed funding and secured naming rights to a major public hospital in San Francisco that AHHA members visited on a 2018 study tour. Clearly the professed commitment to health only applies when there’s a marketing advantage for Facebook and the Zuckerbergs.”

Health Minister Greg Hunt has slammed Facebook for taking down important health sites with its action, saying the government was “profoundly shocked” by the move which had blocked access to multiple government agency sites, describing it as a “disgrace” that sites like a children’s cancer initiative had been affected as a result.

It also presented a risk that disinformation would spread more readily, he told a news conference. The Minister said:

“There is a risk that, if you cannot have accurate information, those that wish to promulgate falsehoods and fictions can do so without a response.

“I’m saying to Facebook: ‘think again, you may be in it for the money but the rest of us are in it for safety, protection and responsibility. This is the moment to return to your origins, where you were meant to be as a company, focused on community (and) engagement, not on the money. Forget the money. Start growing up and make sure you are about community and safety above all else.”

“Irresponsible and dangerous” in a pandemic and bushfire season

A joint statement from the Australian Academy of Science, Science and Technology Australia,and the Australian Science Media Centre said these organisations share valued and peer-reviewed science insights and that Facebook cannot reduce misinformation while blocking sources of trustworthy scientific information.

“For Facebook to block access to the feeds of trusted science and health organisations in Australia during a pandemic and bushfire season is irresponsible and dangerous,” said Science & Technology Australia Chief Executive Officer Misha Schubert.

“At a time when the company is taking steps to tackle misinformation on its platform, it’s concerning it has chosen to silence some of this nation’s leading scientific voices.”

Dr Susannah Eliott, CEO of the Australian Science Media Centre said: “We are very concerned about the impact of this action on the quality of information reaching the public. Facebook is used by many non-news organisations to distribute evidence-based information to the public on critical issues such as vaccines, pandemics, climate change and extreme weather events. Social media platforms have a responsibility to enable the sharing of accurate information on these key topics and not increase the prominence of misinformation. 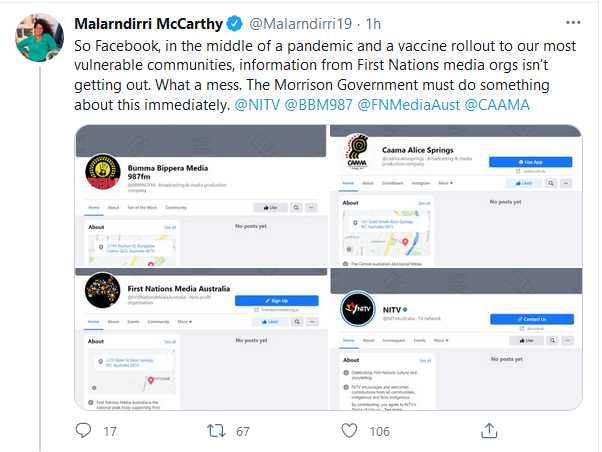 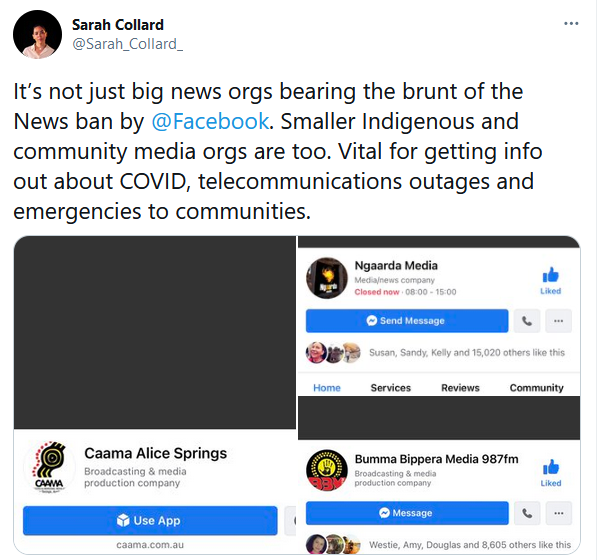 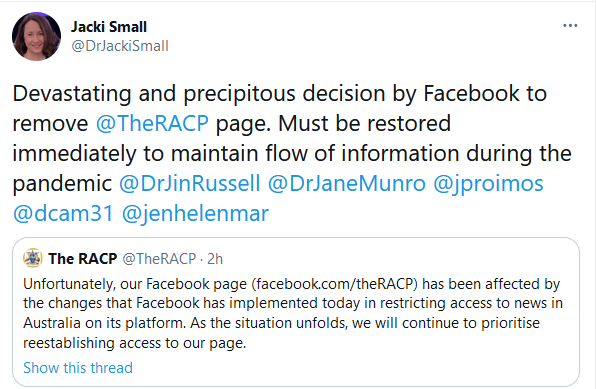 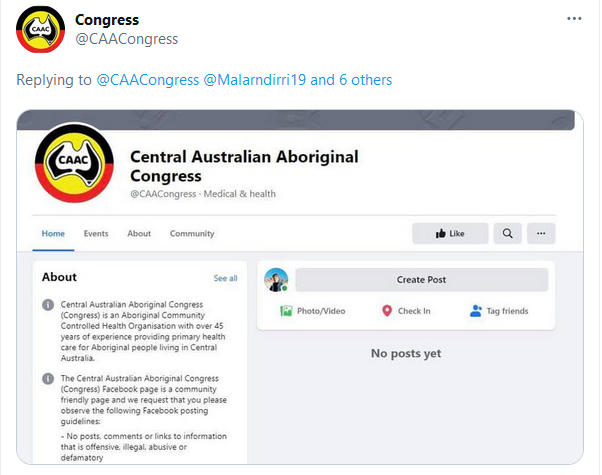 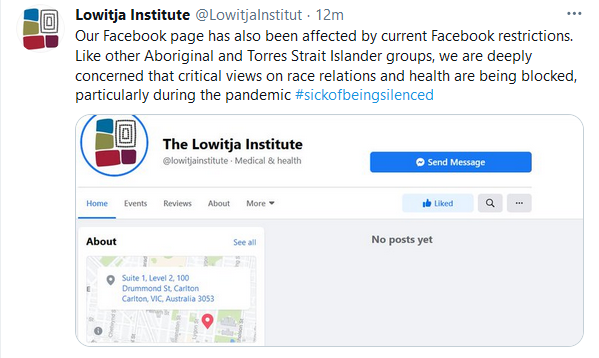 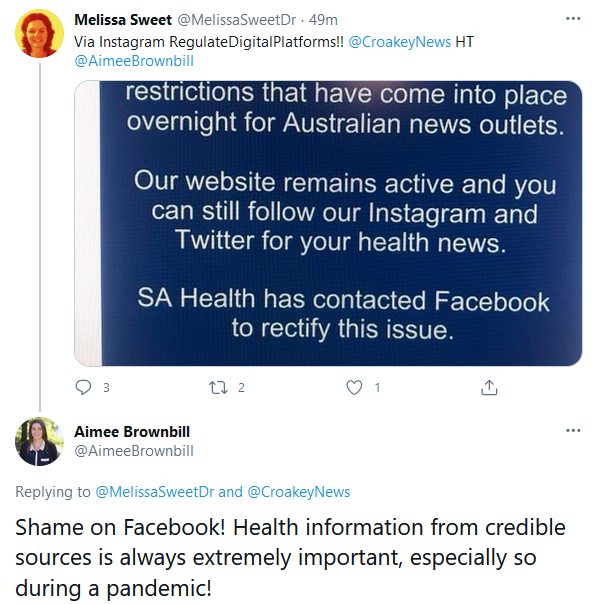 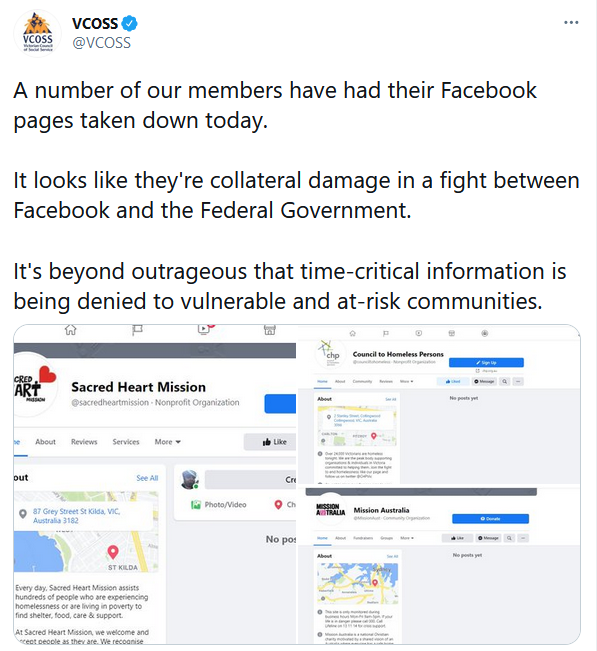 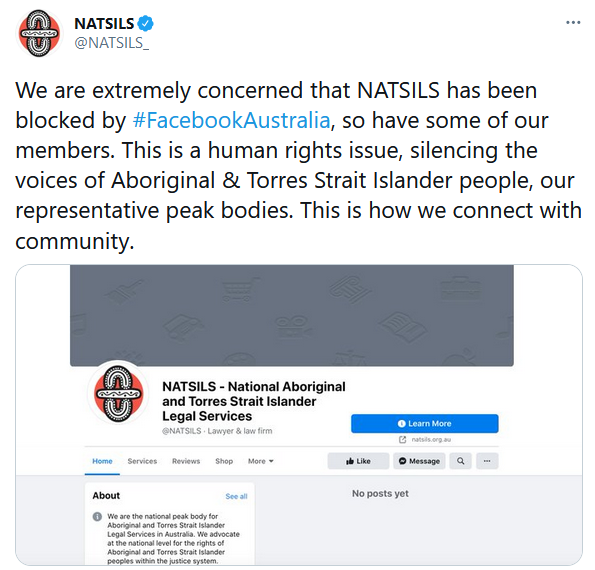 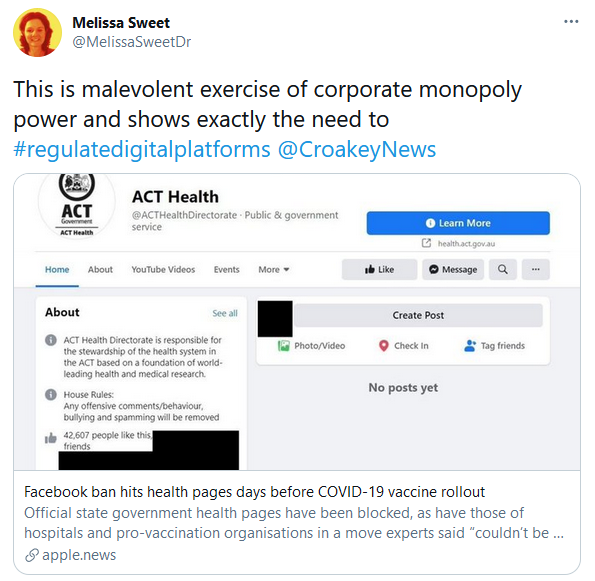 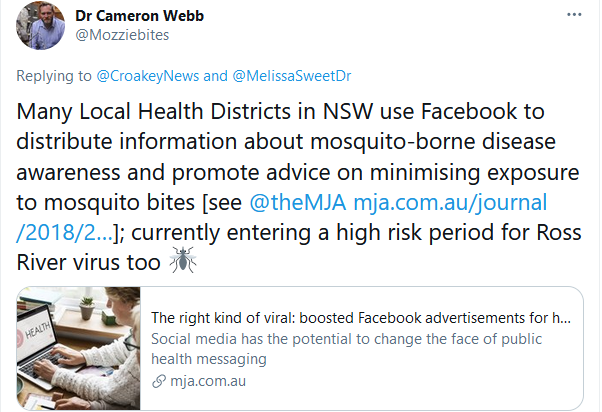 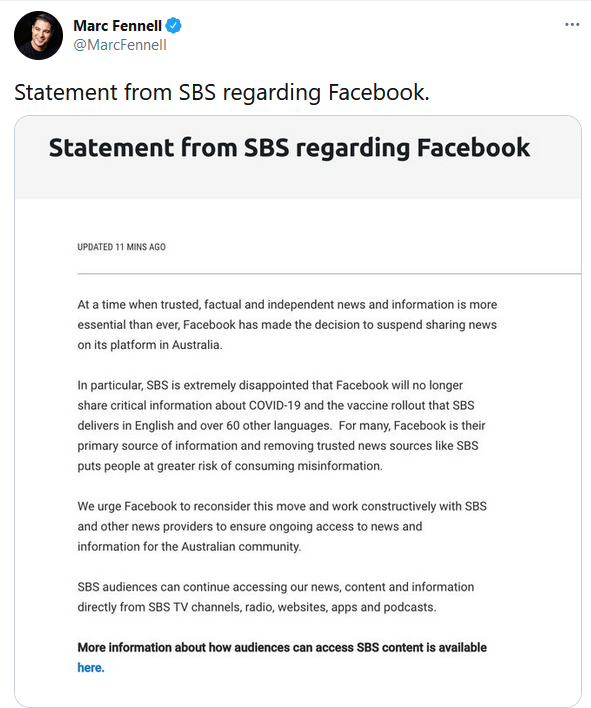 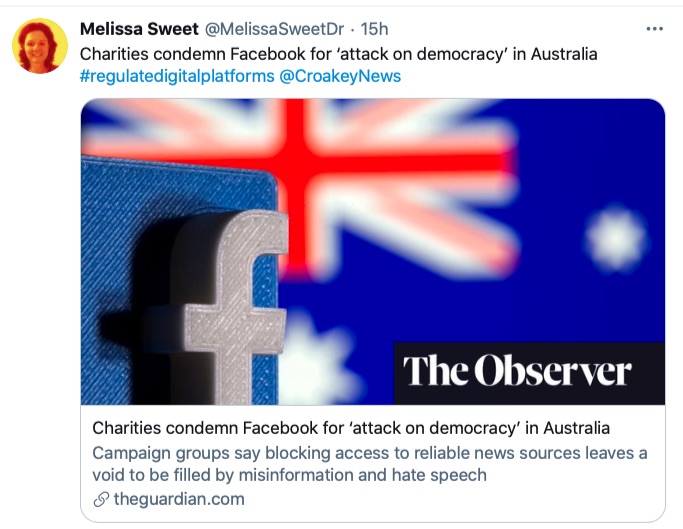 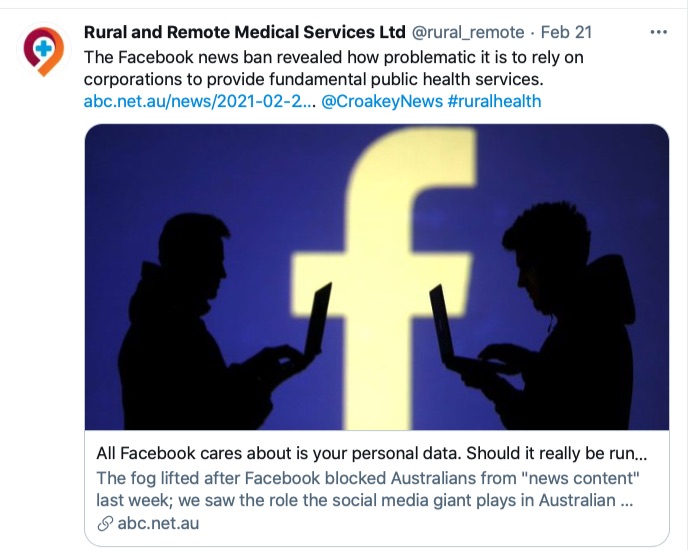 PrevPreviousBeyond the vaccine horse race: what are the wider issues of concern?
Next‘Sorry’ must mean healingNext