From the Collins Dictionary's 2017 Word of the Year announcement

Croakey has launched a campaign calling for a cohesive and vigorous public response to the crisis in public interest journalism in Australia.

Using the tagline “Public Interest Journalism – it’s a health issue”, the #PIJ campaign will seek to rally the voices of the health sector and highlight the health implications of this crisis. 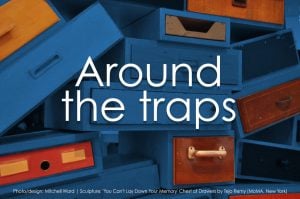 Our second article in an ongoing series is from Kristy Schirmer, the co-founder of the Australian Public Health Consultant’s Network, and it’s also the latest installment of a semi-regular new column – Around the Traps – being provided by members of the Network.

She writes below on the risks for public health and wellbeing from fake news, and from what is known as “false equivalency” – described here as “the practice of giving equal media time and space to demonstrably invalid positions for the sake of supposed reportorial balance”.

“The beginning of wisdom is found in doubting; by doubting we come to the question, and by seeking we may come upon the truth.”  Pierre Abelard, French philosopher, teacher and theologian, 1079-1142

Fake news comes up so commonly in conversations, both in and outside the workplace. It is truly embedded in our everyday lives and worthy of its 2017 Word of the Year  titles from both Collins and Macquarie dictionaries.

There’s always been fake news: sensationalist reporting which translates to myths and beliefs held in the community. Does the growing incidence and concern about fake news though bring public health an opportunity, indeed a responsibility, to intervene with facts and evidence? Maccas fries to cure your baldness, anyone?

It must also be said that one person’s ‘fake news’ is not another’s ‘alternative facts’. Things are true or they are not. At the very least, there are issues for which the evidence is strong.

A frustration that people working in public health may have experienced is the arbitrary false balance of reporting in journalism of so called public health “debates”, for example, immunisation and breastfeeding, where both “sides” are given. Have you ever watched a news or current affairs story and wondered why both the professor and the health blogger are being given equal coverage?

Research from Pew Research Center shows that in America two-thirds of people receive at least some of their news via social media, with Facebook the most common social media source.

Recent Australian research on how young people access, perceive and are affected by the news  reported that that 54 per cent of those surveyed said they hardly ever or never check whether a news story they have found on the internet is true.

The 2018 Edelman Trust Barometer, an annual international poll on trust of business, politics, non-government organisations and the media, brought mixed results. While there was a 10 per cent jump in trust in media, 65 per cent of those polled were unsure about what was fake and how to tell.

Antidotes to fake news are now emerging. These seem to be offered by those who have the most to lose, including scientists and experts who are ignored, misquoted or contradicted. For example, the National Science Foundation has funded the research of a project which will enable digital devices to purge fake news stories.

In March this year, in the wake of more mass shootings in the US, the American Public Health Association announced that any of their published articles about firearms would be made free to allow greater access to evidence to inform the broader public.

Social media platforms often criticised for propagating fake news are also stepping up to proactively address the issue. Twitter has announced a Request for Proposal for a set of health metrics which they can use to ensure that their platform has healthy conversations in order to prevent issues such as misinformation and echo chambers, but also abuse and spam.

See this series of tweets from Jack Dorsey, CEO of Twitter, announcing Twitter is looking at how to measure and retain healthy conversations.

In the meantime, Twitter has supported the following four principles of a healthy public sphere, specifically:

Facebook has also recognised that it needs to play a role in maintaining the integrity of their platform, but nothing formal has been announced other than tweaks to the algorithm which could further enable the spread of fake news.

But we can all take action too. If you see an image you think is faked, there are some things you can do to test your hunch. And Croakey contributing editor Amy Coopes on Twitter shared this simple poster which looks to improve general media literacy. 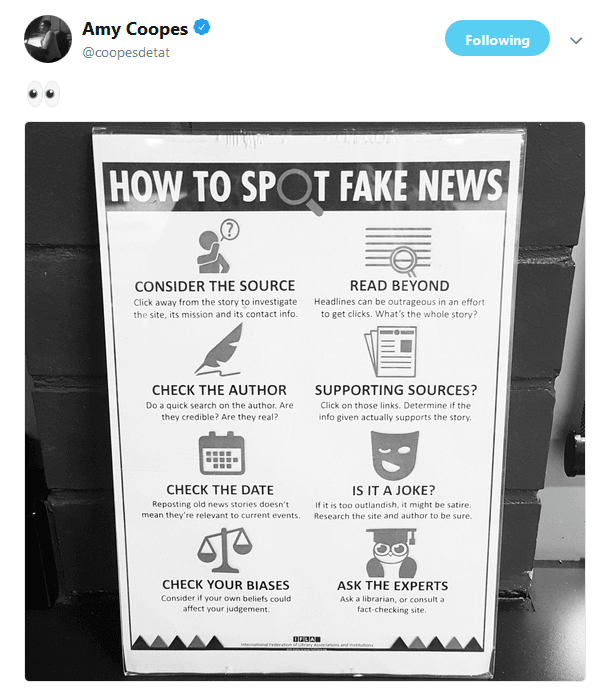 Some questions and reflections

Where does this leave us? Fake news, social media and health literacy issues are vital issues that affect health, wellbeing and our democracy.

The National Statement on Health Literacy published by the Australian Commission on Safety and Quality in Health Care in 2014 states that only 40 per cent of adults have the required level of health literacy to understand and act on health information. With social media now part of the ecosystem where health content is consumed, the ability to question and disregard what appears on our news feeds is increasingly important.

This is an opportunity for public health professionals and organisations to reflect on the following questions.

Here are some thoughts from my colleagues in the Australian Public Health Consultants Network. Feel free to share or add yours in the comments.

For me, one of the most difficult issues with misleading information is around vaccinations. Fake articles, old articles and information from studies that have been discredited can be shared on social media to appear as though it is new and relevant information and/or research. There can be a real lack of understanding of the difference between a case study and a large sample size robust trial and it is difficult for someone scrolling through a feed to differentiate quickly. Maybe health professionals and health researchers need training on how to effectively get your point across in social media, with minimal jargon while still getting facts across. Simple messages like the poster shared in this article are a good idea.

Fake news is not new, although the term ‘fake news’ has only recently been added to our vernacular. We’ve all seen instances of false and inaccurate information being disseminated under the guise of news, often by those with vested and commercial interests. Last year the tobacco industry was aptly dubbed the pioneer of fake news.

Due to the rise in popularity of the term ‘fake news’, there is a heightened awareness of misinformation in the community – this is positive. In a globalized and information rich world, we need to be more savvy and discerning than ever. Skills in critical analysis and media literacy are so important. But is the sheer ubiquity of the phrase ‘fake news’ also serving to delegitimize the media? John Oliver thinks so. Watch his analysis of Trump’s manipulation tactics in this clip, The Trump Presidency, which comes in the context that nearly half of American voters think the media make up stories about him.

Kristy Schirmer is the Principal Consultant at www.zockmelon.com.au. Kristy is also the co-founder of the Australian Public Health Consultant’s Network. You can connect with her on Twitter at @Zockmelon.

PrevPreviousWho are the new generation of public health leaders and how can more step up?
NextLifting the lid on a media ‘scandal’ about doctors’ feesNext