Introduction by Croakey: Next April will mark the 30th anniversary of the final report of the Royal Commission into Aboriginal Deaths in Custody, bringing into sharp focus just how little progress has been made in system reform in the subsequent decades.

Just this week, the ABC broadcast footage, recorded in March 2018, of a police officer shoving and verbally abusing a teenage boy in the Alice Springs watch house.

Mick Gooda, a descendent of the Gangulu people and former Commissioner of the Northern Territory Royal Commission into Child Protection and Youth Detention, tweeted that the report made him feel like crying, and that he expected police were “still treating our people like this”.

Now, the families of Aboriginal and Torres Strait Islander people who have died in custody have joined together to call on the Prime Minister to meet with them face-t0-face on the anniversary of the Royal Commission’s report next April.

In the article below, we look at the petition and speak to the University of Sydney’s Wiradjuri Associate Professor Megan Williams about the importance of workforce training and the development of an evidence base to drive reform.

Families whose loved ones have died in custody are calling on the Prime Minister Scott Morrison to meet with them face-to-face on the 30-year anniversary of the Royal Commission into Aboriginal Deaths in Custody.

The families have launched a petition, which is being supported by the National Aboriginal and Torres Strait Islander Legal Services (NATSILS) and is promoted in a Rolling Stones magazine feature.

“The Royal Commission reviewed 99 Black deaths in custody and made 339 recommendations,” the petition states.

“The Federal Government knows that few of those recommendations have been fully implemented, despite a one-sided report that says otherwise.

“In reality, most of the recommendations that have been actioned have subsequently been defunded or remain extremely under-resourced with limited Aboriginal governance.

“We have families today experiencing the same trauma that prompted the Royal Commission. The intergenerational trauma of deaths in custody is crippling for Aboriginal communities who continue to fight but are still receiving no justice for the deaths of their loved ones. We are being silenced.” 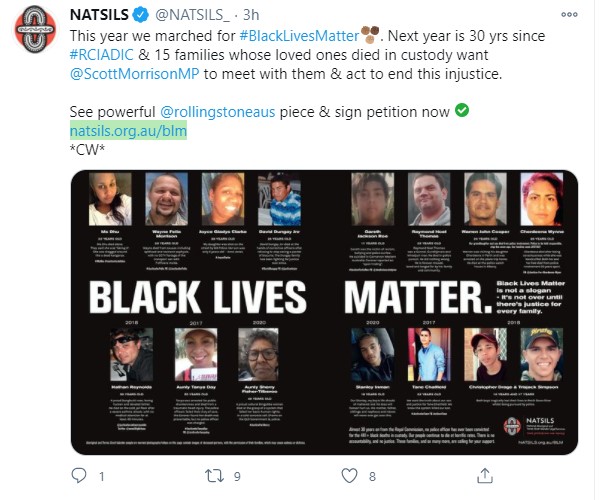 In a media release, NATSILS said: “Almost 30 years and over 441 deaths since the Royal Commission, no police officer, corrective services, prison guard or medical authority has been convicted for Black deaths in custody.”

NATSILS added that there had been five Black deaths in custody since June this year. “Aboriginal and Torres Strait Islander people continue to die at horrific rates.”

In calling for the petition, Aunty Jennifer Clayton, mother of Wayne Cooper and grandmother of Cherdeena Wynne, wrote on behalf of their family:

Thirty years of deaths in custody and nothing much has changed. My son passed away, and then his daughter passed away, both at the hands of police. When they write out the recommendations from the coroner, it looks good on paper, but they need to put recommendations into action. Our kids are still dying in custody. Stop the cover ups and own up – they need to be held accountable for their wrong doings. I’ve lost two of my immediate family and it’s worn me down. They treat us like animals and nobody cares.”

And, in a statement, Tane Chatfield’s family said:

Our beautiful Tane, 22-year-old Gomeroi man was taken too soon. The system killed our son. We will continue to fight for justice to make change so we can stop Black deaths in custody. The pain never goes away, it’s still raw. Corrective services have that much power in Australia without being investigated, why do we need a Prime Minister? These deaths won’t stop until there is an independent body to investigate police and prisons.”

Speaking to Croakey, Wiradjuri Associate Professor Megan Williams, Research Lead and Assistant Director, National Centre for Cultural Competence and member of the Sydney institute of Criminology at the University of Sydney, said the lack of progress on the Royal Commission’s recommendations underscored the very system failure the inquiry had sought to investigate.

Williams said that while there was much alignment with current human rights policy obligations, the Royal Commission’s recommendations pre-dated the United Nations Declaration on the Rights of Indigenous People, the UN Nelson Mandela Rules, and the Closing the Gap framework.

“We need to match the Royal Commission recommendations with our current human rights policy obligations so governments and decision makers can see where they can act, should act and already are acting,” said Williams, who is a family member of people in prison and had a young family member die in custody.

“Workforce training to critically self-reflect on workforce cultures and biases – in terms of racism, human rights breaches, and white privilege, for example – is so starkly minimal that it is almost non-existent,” Williams said.

Much work was needed to build a culturally safe and culturally competent workforce in Australia and to improve accountability, she said.

“There is very little workforce training and professional development in these areas, and almost no accountability in position descriptions.”

Williams, a contributing editor and a director of Croakey Health Media, said work too was needed on the issue of equity in workplace targets.

“We hide from what equity really means with workforce targets and this contributes to system failure. It means we do not have the numbers of culturally capable people to work with the numbers of Aboriginal and Torres Strait Islander people, so that is discriminatory.”

While the Black Lives Matter movement had been effective in raising awareness of the ongoing crisis in the justice system, Williams said it was evidence, rather than awareness, that would be key in driving meaningful system reform.

“We know that prison workforces are not reflective of the general public; they are in a punitive environment that is toxic, and, I would say is extremely anti the Black Lives Matter movement,” she said.

“Anything radical, anything about advocacy can have the opposite effect if we are not careful in coupling it with workforce development that promotes social justice.

“The more that Black Lives Matter can do to deliver evidence from Black perspective, the better. Advocacy is only one part of change and control of the evidence by Black lives is vital.”

PrevPreviousWoolworths: a case study of the commercial determinants of health – and how communities can fight back
Next‘Don’t move them, free them’: anguish continues for Medevac refugeesNext