Fancy some Sex, Lies and Pharmaceuticals??

(Please see bottom of post for an update on September 9: a report from Dr Pieter Peach of the Melbourne launch of the book)

Ray Moynihan is a friend and colleague. So you can consider this a blatant plug for a friend/colleague’s new book.

But I wouldn’t plug if I didn’t think that plenty of Croakey readers might be interested. Besides, he has come up with one of the catchiest titles ever: Sex, Lies and Pharmaceuticals.

The publisher is billing it as: “A hard-hitting and provocative expose that takes us inside the corridors of medical power to watch the birth of the new ‘disease’ – Female Sexual Dysfunction – and the marketing machine that will create it.”

A series of launches is planned for Sydney, Lismore, Byron, Melbourne and Brisbane. The details are below, and Moynihan – who has promised to write about the book for Croakey next week – says you are most welcome to attend. 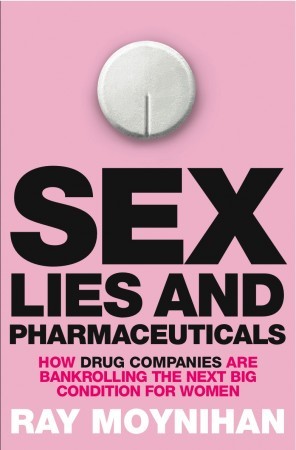 Here is his report:

Journalist and author of “Selling Sickness” Ray Moynihan spoke at a book launch for his new book “Sex, Lies, and Pharmaceuticals” in Melbourne this week. The take home of his talk was simply this:

“There is a merging of marketing and science that desperately needs to be picked apart.”

As I haven’t yet had a chance to read his book, I’ll recount his discussion with a thankfully enlightened audience in a small bookshop.

Ray set out early to clarify that his book was less about the specific example of industry engineering sexual disorder dysfunction, and more about the underlying message, which is of an industry and scientific and clinical community too closely linked to provide reliably effective and safe health interventions.

He claims examples of industry influencing disease criteria, and through sponsored clinicians, input into developing clinical screening tools.  The ultimate scenario revolves around an overarching disease definition which includes real medical conditions, and extends into new territories of marketing induced insecurities.  The result is a shift in the boundaries of what is seen to be “normal”.

He briefly mentioned that the US has plans for “sunshine” legislation to mandate the publication of relationships between researchers and industry.  This I found to be both interesting and potentially pointless.  Any researcher can attest to shallow penetration of declared conflicts of interest in the communication of published articles within the community.  What is interesting though, is the planned availability of the data on the web.  Who knows what intriguing visualizations data hackers will be able to conjure up from the mess of the otherwise uninteresting numbers.

The last question of the night was around the divide between what is expected of natural therapies and prescription drugs.  In short, it was the pretense of science, and the maintenance of the integrity of that pretense, that separated prescription drugs from the rest.

So next time you pick up that bottle of that “clinically proven” Randy Sheep Grass, remember the powerful shield that is the absence of pretense.

PrevPreviousWant to get on your soapbox about journalists, the media, whatever? Here’s your chance…
NextIs this a window of opportunity for greater equity in health policy?Next