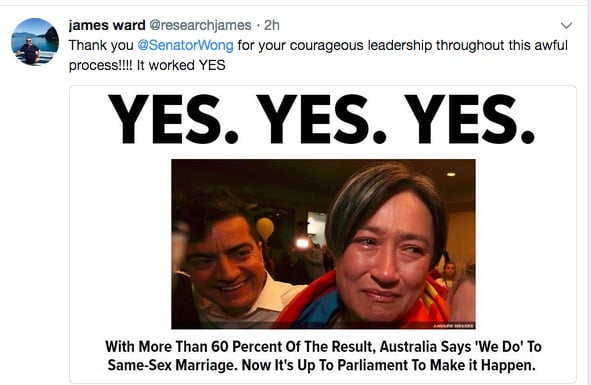 Watch the interview with @researchjames below

Participants in a major Indigenous health research symposium in Brisbane today burst into spontaneous applause when news broke of the public’s support for marriage equality.

The importance of the outcome for health is highlighted in the interviews below with Professor James Ward and Romlie Mokak, conducted by Croakey Conference News Service reporter Marie McInerney.

James Ward – @researchjames – said it was “fantastic” news, and an incredible result for young Aboriginal and Torres Strait Islander people, with the potential to help reduce suicides. “Love prevailed in the end,” he said.

Romlie Mokak – @RMokak – welcomed the results as a “fantastic outcome”, noting the importance of human rights for health. “The people have spoken and politicians just need to get on with the job of passing the legislation,” he said.

The interviews were conducted at a National Health and Medical Research Council research translation symposium, focused on Aboriginal and Torres Strait Islander health and co-hosted with the Lowitja Institute, of which Mokak is CEO.