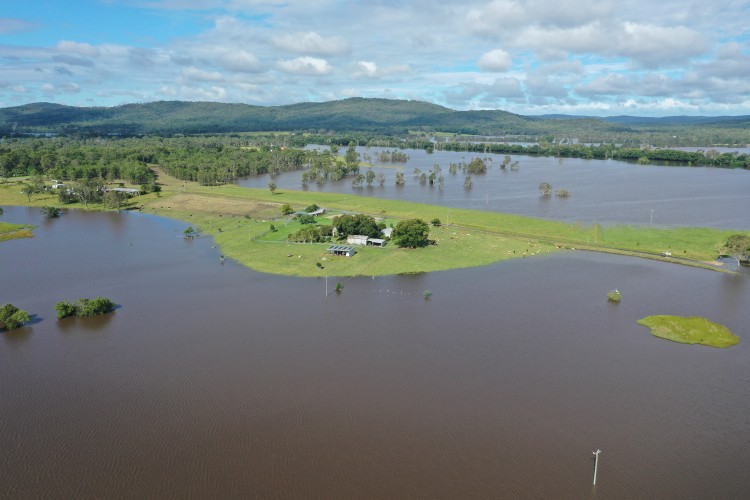 As the Federal Budget was handed down and debated this week, people in the Northern Rivers region of New South Wales were again evacuating their homes amid rising floodwaters.

The Federal Government is saddling future generations with the cost of pollution and missed opportunities to move to clean energy, according to a Northern Rivers farmer caught up in the east coast flooding.

Angry over the lack of any ‘meaningful measures’ on climate change in the 2022 Budget, Peter Lake accused the Federal Government of increasing the risk rather than addressing it.

Lake, a beef cattle farmer based at Ulmarra, near Grafton on Bundjalung Country, was busy moving cattle when he spoke to Croakey, saying the property was “copping it” from persistent rain. 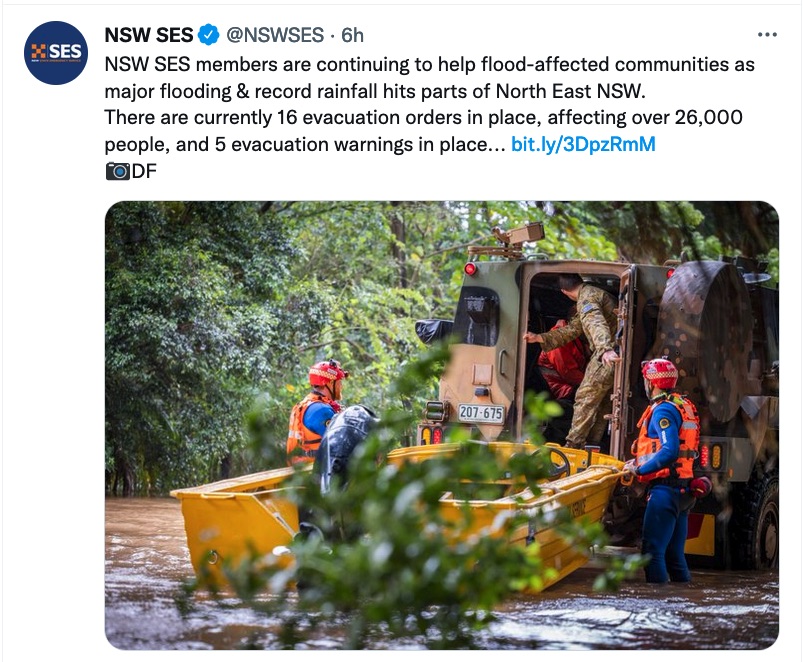 A member of Farmers for Climate Action (FCA), Lake accused the Government of trying to ‘spin’ a message that they are taking action when they’re not.

“They see it as an electoral issue to be managed,” he said. “All they are doing about climate is increasing our risk factors and this year’s Budget hasn’t changed that.

“And under our ‘technology not taxes’ mantra, we are somehow finding billions of dollars to subsidise otherwise non-viable fossil fuel projects: fracking, gas-fired power plants and new coal mines.”

Lake argues that the world is moving towards renewable energy and Australia should follow.

“Even if you don’t believe in climate change, the reality is that the world wants clean energy, and this government is doing its utmost to stand in the way of that,” he said.

“They are saddling my grandchildren with the cost of further pollution and the missed opportunities that are there to create clean, sustainable energies into the future.”

“Kick in the guts”

Jon Wardle, Professor of Public Health at Southern Cross University in Lismore and a member of the Public Health Association of Australia’s Research Advisory Committee, described the Budget as “a real kick in the guts”.

“It was announced as people in Lismore were preparing for one of the largest floods in the town’s history, occurring only one month after the largest flood in history – that’s not normal but it’s becoming reality due to climate change.

“The Budget was a very clear indication that the Government has no interest in either acknowledging or preparing for the realities of climate change,” he said.

Wardle stressed that it’s not just the Northern Rivers: that Australia will be impacted by climate change more than any other country, and that the regions will bear the brunt.

“It’s the Northern Rivers now, but floods will increase due to hotter climates holding more moisture, fires will intensify with higher temperatures – everything will become more variable and unpredictable.” 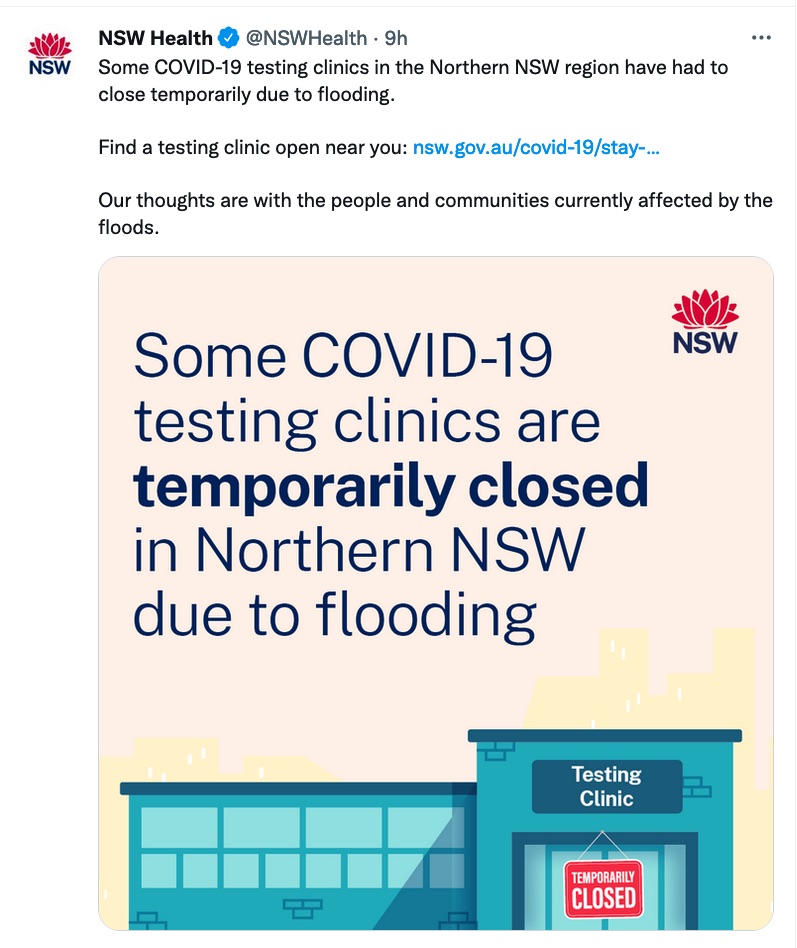 “And I am really disappointed that were no bold or innovative moves (in the Budget) to make a difference,” she said, adding that any climate change deniers should come to the area.

The organisation’s programs revolve around working in nature, and young people often have a sense of hopelessness that the grownups aren’t doing anything about climate change, she said.

Speaking to Croakey as rain continued to fall outside her Lennox Head home, White said many of her young clients lost homes to the floods and there’s continuing nervousness about the unfolding situation.

“They’ve possibly lost both their mum and dad’s home; all their possessions and some Year 12 students lost their final year projects … Now they are living in volatile family situations with extended family because there is no choice for them,” said White.

Human Nature had been working with the NSW Education Department to try to identify locate young people who needed help but “this weather pattern has spread them to the winds because their schools and homes have gone”.

While she applauded a Budget boost for youth mental health, White said Headspace – which is getting extra funding in 2022-23 – and other services that require young people to go to them, don’t work with a lot of her clients.

“If you are already leading a shambolic life, and the world is not very good for you, you’re just not going to do that. Our model goes out to where the young person is, we don’t sit in an office and we spend a lot of time building rapport,” she said.

On a personal level, White said the Lismore dental practice run by her husband was just about to reopen but that had been put on hold by rising waters and continuing rain.

“We’ve already been closed for a month, and you can’t even test the equipment without power and there’s no support for getting such businesses up and running,” she said.

Burning coal and gas increases the risk of national disasters such as the current east coast flooding, yet the government is investing money in ‘polluting, destructive fracking’, GetUp said in a statement.

“(This) will destroy land and water, when what remote communities have consistently asked for is new housing, housing refurbishments and upgrades,” it said.

GetUp Election Co-Director Larissa Baldwin, a Widjabul woman from the Bundjalung Nations and First Nations Justice Campaign Director with the organisation, said communities in the Northern Territory and Queensland urgently need housing and health, not to prop up fracking corporations.

“It shows a callous disregard for the future security of Australia and the Australian people, and it continues a course of conduct that makes Australia an global embarrassment,” he said.

But Ritter wasn’t surprised at the omission, saying there had been no sign the Federal Government was taking the latest devastating floods or the 2018/19 bushfires seriously.

“Tragically, I wasn’t expecting a sudden change of heart in this Budget because nothing suggested there was going to be.”

Ritter questioned whether Prime Minister Scott Morrison was adopting a “wrecking crew” approach to government – a term coined in the US to describe politicians who, deliberately or recklessly, seek to govern badly in order to advance an extreme ideological agenda (explained more in this Twitter thread).

The Greenpeace Australia Pacific CEO said the approach could help consolidate power by running down the public good: “It deteriorates the capacity of government to act but doesn’t necessarily reduce the ability of the politicians to maintain control.”

Ritter sees the implication of such an approach for people facing natural disasters is government not undertaking necessary reconstruction after such events.

“We’ve got tens of thousands of people around Australia who are living in flood zones and in coastal communities, whose futures are in jeopardy due to climate damage.

“What we’ve seen is a systematic stripping away of the planning and work that was being done – initially by the Abbott Government – to a situation where no planning is being done,” he said.

Ritter said it was an attitude of pretending climate change us not real, leaving people to face the consequences, and responding late with Band-Aid solutions rather than a comprehensive government response that left no-one behind.

Professor Jon Wardle’s message to the Federal Government is that the time has come to face the reality.

“You can’t talk your way out of these realities, and people living these realities – and those watching them – are no longer buying the myths that climate change isn’t having an impact already.

Wardle called on the Federal Government to step up, saying there is no way an appropriate or effective recovery plan can be put in place without government involvement.

The flood experience has shown the importance of government as a service provider yet this Budget looks to “take much of that away’ and proposed welfare cuts as a key budget repair mechanism.

“How is this going to help a town where more than a third of the population is displaced?” he asked.

Wardle raised concerns about the under-resourcing of BOM and emergency services, which meant people were given the all clear before going to bed, only to be woken up with evacuation orders.

“We couldn’t even get accurate data on river levels or rainfall because the weather stations were not replaced after the last flood. This only added to everyone’s anxiety and trauma,” he said.f 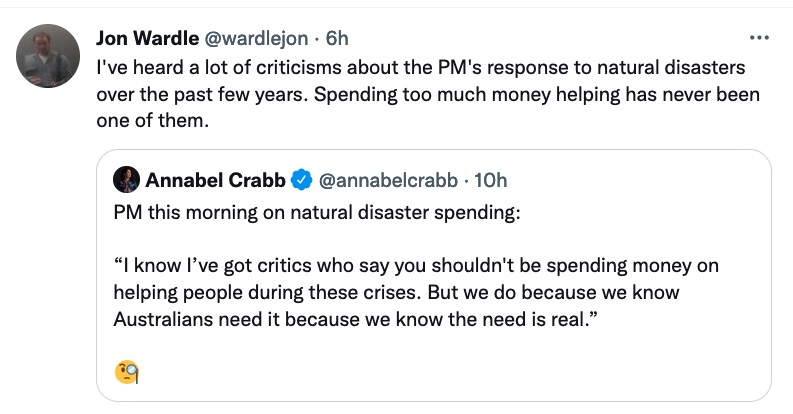 See Croakey’s archive of stories on the climate crisis and health.

PrevPreviousIt’s time, this Budget shows, to ensure health is an election priority
NextA letter from the Minister for Health and Aged Care, with extrasNext