(Update, 27 July: A comment from the Federal Department of Health has been added at the bottom of this post
Update, 28 July: An open letter from health academics at UTS has been added to this post)

Doctors and academics are warning the Federal Government that the closure of the Aboriginal Medical Service Western Sydney (AMSWS) will be devastating for the health and wellbeing of Aboriginal people in Western Sydney.

In an open letter to Federal Ministers Sussan Ley, Nigel Scullion and Fiona Nash, community psychiatrist Dr Neil Phillips said there is an “appalling contradiction” between the Government’s professed concerns at a recent roundtable meeting on Indigenous suicide rates and the closure of the AMSWS, where a social and emotional wellbeing team has been providing extensive mental health services.

Dr Phillips, who has a long history of involvement with Aboriginal mental health, including at the AMSWS, warns there is no safe, ethical or practical way of transferring the AMSWS’s 11,000 active patients to other local health services before the deadline of September 30, and urges the Government to support an ongoing community controlled service in the area.

“I have been in psychiatry for 44 years, much of it working with Aboriginal and rural and remote services. I have never before been so worried that an awful avoidable tragedy will be inflicted on my patients, their families, their community and, indeed, the wider community.”

Meanwhile, a large group of academics from the School of Public Health and Community Medicine at the University of NSW, led by the Director of the Muru Marri unit, Professor Lisa Jackson Pulver, have also published an open letter to the Government, warning that the AMSWS closure will be “potentially catastrophic” (see an extract from the letter at the bottom of this post, or read the full letter here).

The letter from Dr Phillips can be downloaded here, or read below. 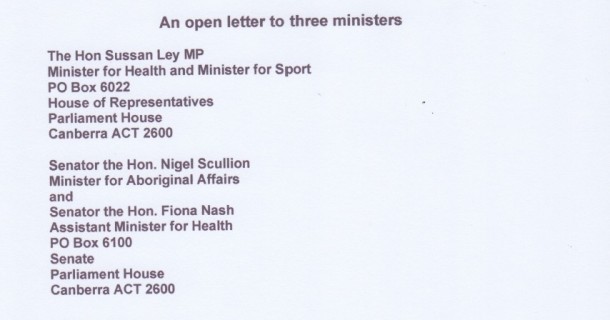 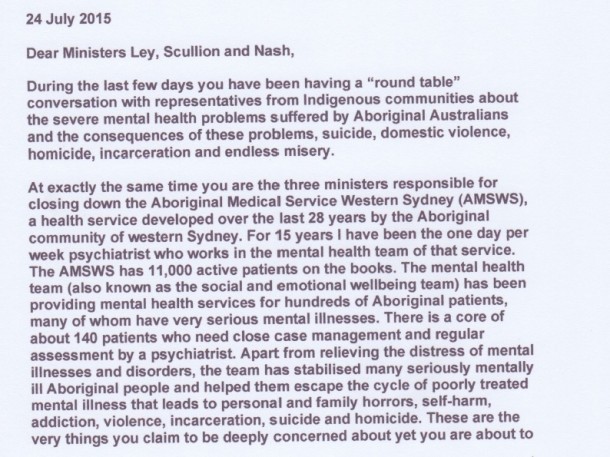 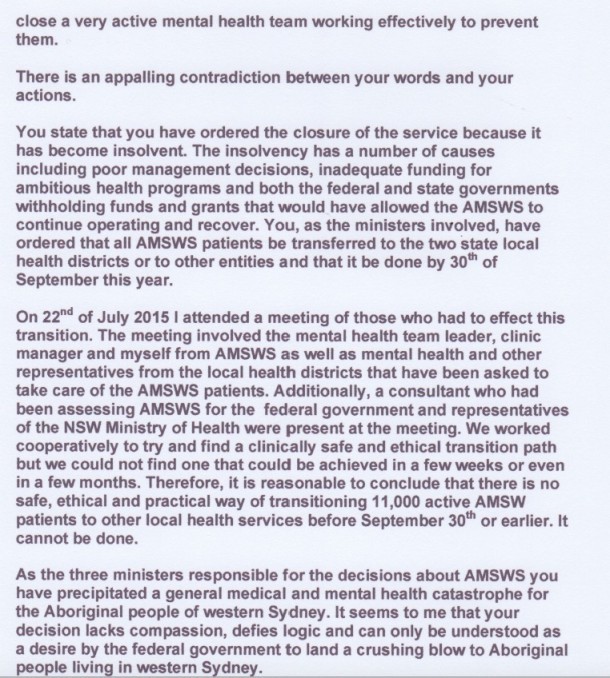 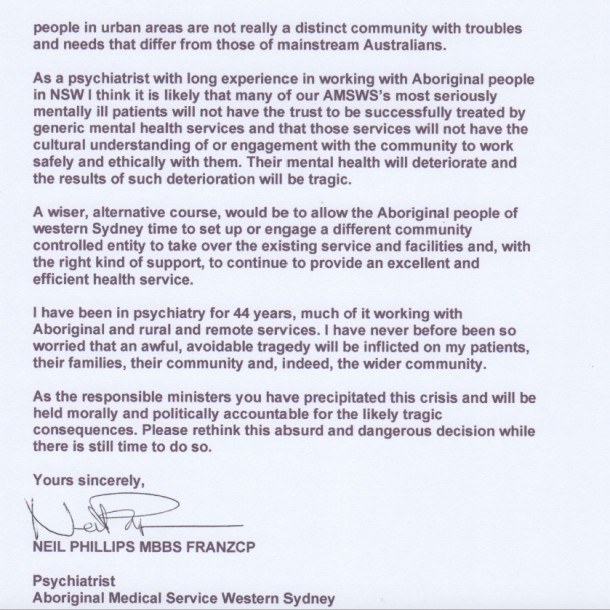 “Replacing a continuous quality improvement service model such as the AMSWS with, as it is claimed in the media, a model based on competitive procurement runs the very real risk of reversing recent improvements in timely access to health care by the Western Sydney community. Competitive tenders inherently favour large mainstream organisations. Recent research shows that Aboriginal and Torres Strait Islander people regularly experience racism in mainstream settings; mainstream services often report that their staff members are ill-equipped and poorly trained in cultural appropriateness; and they also report difficulties in stimulating access by Aboriginal and Torres Strait Islander peoples. These issues are already recognised by federal and state policies stating the need for cultural safety.

The community controlled health sector is a leading employer of Aboriginal and Torres Strait Islander people throughout the country, including Western Sydney. The potential loss of jobs combined with the potential loss of professional skills and experience and social, cultural and community capital built up over decades at the AMSWS makes the prospect of its closure, in our view, potentially catastrophic for Aboriginal and Torres Strait Islander health in Western Sydney.

Aboriginal and Torres Strait Islander community controlled health and medical services often experience demand for their services that outstrips supply. Growing an Indigenous workforce to meet this demand has been a key focus of UNSW Medicine for over a decade.  SPHCM is a leading public health educator in Australia and the Asia-Pacific region and is committed to excellence in research, learning and teaching and action to enhance public health and health services across Australia and internationally.  UNSW and the SPHCM enjoy a  reputation as the university of choice for many hundreds of Aboriginal and Torres Strait  Islander students from around Australia, and for many thousands of students internationally.

We have a long tradition of working in partnership with the Aboriginal and Torres Strait Islander community controlled health sector in our research and in our teaching. In 2013, six Aboriginal staff from the AMSWS graduated from SPHCM with qualifications in public health.”

• Note from Croakey: The Federal Government will be asked to respond to the concerns raised in these letters.

The AMS Western Sydney (AMSWS) is in significant debt impacting on its ability to deliver comprehensive primary health care to the western Sydney Aboriginal and Torres Strait Islander community.  It is the Government’s policy to use health care funding to provide services to the community rather than to assist an organisation to meet outstanding debts.

As such the Government has decided it can no longer fund AMSWS on an ongoing basis and officers from the federal Department of Health informed the Board of AMSWS of this decision at a face to face meeting on Wednesday 24 June 2015.

AMSWS has accepted a three month funding extension up until 30 September to assist with the transfer of clients and services.  The Government is unable to continue subsidising the service beyond this three months because of the financial difficulties being experienced by the service.

This decision has been informed by the result of a show cause process that the Department issued on 16 April 2015 including advice from recent audit reports.  This also follows on from work already happening with the service – including the engagement of a Funds Administrator to assist AMSWS address its financial and governance issues as far back as December 2014.

On 1 July 2015 the Board of AMSWS decided to go into Voluntary Administration and appointed Mr Michael Jones of Jones Partners Sydney as the Administrator.  The Administrator is now responsible for the day to day operations of the AMSWS and as such is continuing to ensure that services continue to be provided in terms of the three month funding extension.

The concern for the Government in this situation is to support as smooth a transition as possible for clients.  The Department of Health has been working closely with the NSW Ministry of Health on the development of a plan to transition services to an interim provider to ensure continuity of care and patient safety.

The Australian government acknowledges that this could be disruptive for patients, many of whom benefit by the community controlled model of care presently offered by AMSWS, but as this service is now no longer viable, every effort will be made to transition patients to other service providers as quickly as possible.

The Government is hopeful that AMSWS will cooperate with the federal and state health authorities to assist in the transfer of patients to other services for an interim period and until such time as an approach to market is undertaken for a permanent provider of services to western Sydney.

Children and families will be particularly hard hit, these health experts warn, in an open letter to the Federal Health Minister, Sussan Ley (read the full version here or below).

The AMSWS’s work in providing an holistic, one-stop service for families with children who have a disability has been particularly valuable, and its closure would cause “significant upheaval and destabilisation” for these children and families. 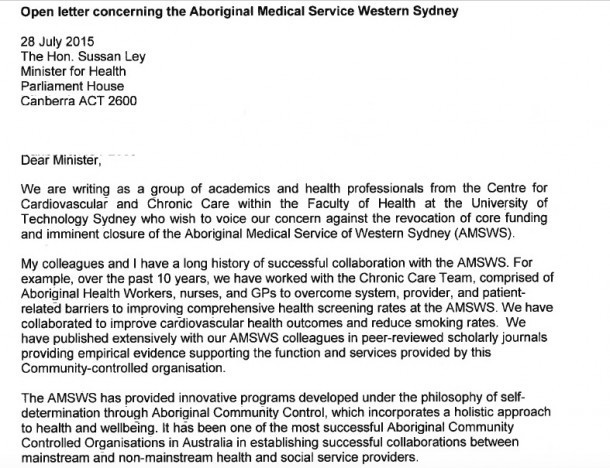 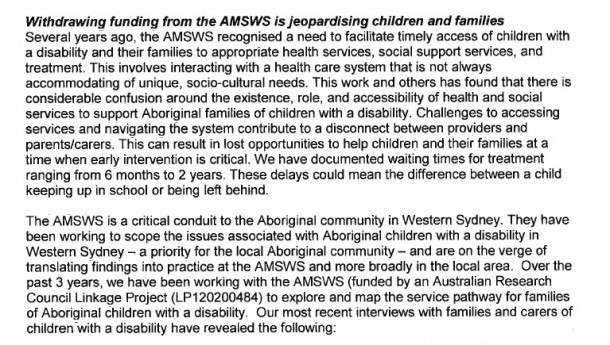 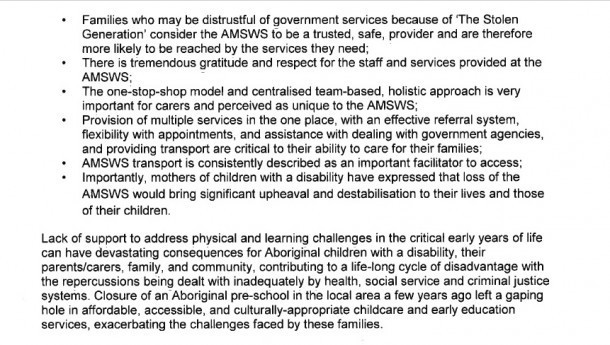 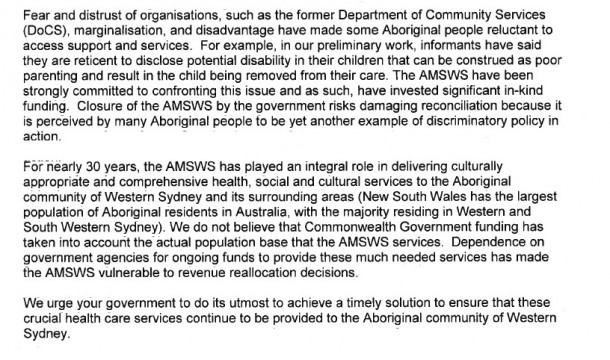 The letter is signed by Professor Jane Phillips