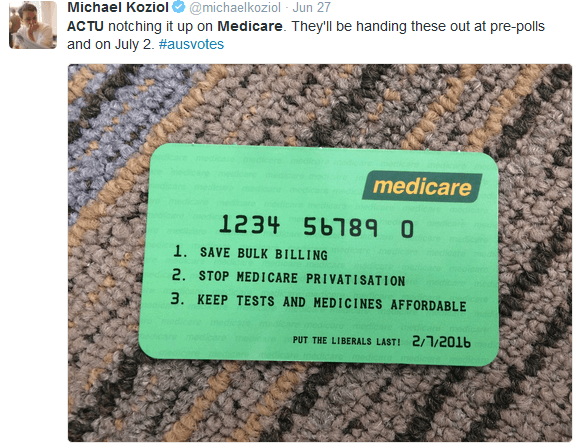 As we move ever so slowly to resolution in the 2016 election, Croakey continues its coverage of #HealthElection16 issues raised through the campaign, and with a lens on promises and performances in the past.

In this post below, Opposition health spokeswoman Catherine King writes that it is not just the 2014 Budget that put Medicare under threat and provided “fertile ground” for Labor’s ‘Mediscare’ campaign, but key measures delivered and promised in Prime Minister Malcolm Turnbull’s time at the helm.

Croakey has invited Health Minister Sussan Ley to also write an article in response and/or to discuss the lessons for health from the election.

Since Malcolm Turnbull’s bizarre election night speech, the Liberals have tried to blame their disastrous result on a ‘scare campaign’ over Medicare. They’ve accused Labor of lying, even called in the police.

It’s a response that shows the Liberals have learnt nothing from Saturday’s election, and worse, is an insult to the intelligence of the millions of Australians who stood with Labor to defend Medicare.

The last eight weeks were simply a continuation of Labor’s three year campaign against the Liberals’ attempts to privatise Medicare and the reason our campaign resonated with the Australian people was because they were true.

The Liberals were so embarrassed by their record on Medicare they hid the Minister for Health and refused to allow her to debate me – the first election campaign without a health policy debate at the National Press Club in nearly 20 years.

Mr Turnbull says the “fertile ground” for this campaign is that Australians have not forgotten Tony Abbott’s disastrous 2014 Budget. This is the one where, despite promising “no cuts to health”, the Liberals tried to introduce a $7 GP Tax and hike the price of prescriptions and ripped billions out of public hospitals.

But in trying to pin the blame on his predecessor, Malcolm Turnbull is whitewashing his own record on Medicare.

In his very first economic statement, the 2015 MYEFO Mr Turnbull went even further than Tony Abbott and cut $650 million from Medicare rebates for pathology and diagnostic imaging, cuts which Pathology Australia, the Diagnostic Imaging Association and others said would push up the price of vital tests and scans – forcing some Australians to skip them altogether.

Then, in this year’s budget, Mr Turnbull and Health Minister Sussan Ley stunned GPs and patients by extending the freeze on Medicare rebates to 2020. At a time when one in 20 Australians already can’t afford to see a GP, the AMA says the extended freeze will cost patients $25 every time they visit a doctor.

As former Health Department Secretary Stephen Duckett has said, shifting costs from the public system onto patients is the very definition of privatisation. On top of this, the Liberals flogged the sensitive National Cancer Registry to Telstra, and spent $5 million trying to privatise the Medicare payments system.

The Medicare payments system is an integral part of Medicare. This cannot be dismissed as some backroom efficiency and Labor was right to target this as being part of a three year agenda to privatise Medicare.

So it’s no surprise to Labor that Australians think that the Liberals are out to get Medicare. Three years of evidence shows that they are.

In contrast, Labor used the long campaign to offer a positive vision for Medicare and health. That’s why we began this campaign with a $2 billion commitment to reverse the Medicare Freeze.

That’s why we also committed to reversing the price hikes to medicines, to maintaining bulk billing incentives for pathology and diagnostic imaging, to properly funding our public hospitals.

These are significant commitments, with a combined cost of around $7 billion to 2020. But budgets are about values, and by making these commitments Labor showed the Australian people that unlike the Liberals we do value Medicare and the health of all Australians.

That’s why Labor wants to do more than just reverse the Liberals’ cuts. We want to invest in Medicare so that it meets the challenges of 2016 and beyond – like an ageing population with a growing burden of chronic disease.

All our health policies can be found here but just to give a few examples, during the campaign, we announced that a Shorten Labor Government will invest $100 million to roll out new models of primary care. We want GPs, nurses and other primary health care providers to work more closely together, so that patients’ care is more integrated and focussed on outcomes.

Labor will also invest $300 million in a preventive health package. The federal government can help Australians to stay well by providing leadership and investment – like $90 million for Australia’s first National Physical Activity Strategy, to get all Australians moving more.

Labor will also establish a permanent Healthcare Reform Commission, including a Centre for Medicare Innovation, so that our health system continues to meet new challenges. Labor will support evidence-based, clinician-led reforms – but unlike the Liberals, we will reinvest any savings in Medicare.

Instead of blaming Labor for holding the Government to account, the Liberals should look in the mirror – and at their health policy. Australians want Medicare and our health system to be stronger, not weaker. And if we get the chance to govern after the last votes are counted, a Shorten Labor Government will deliver.