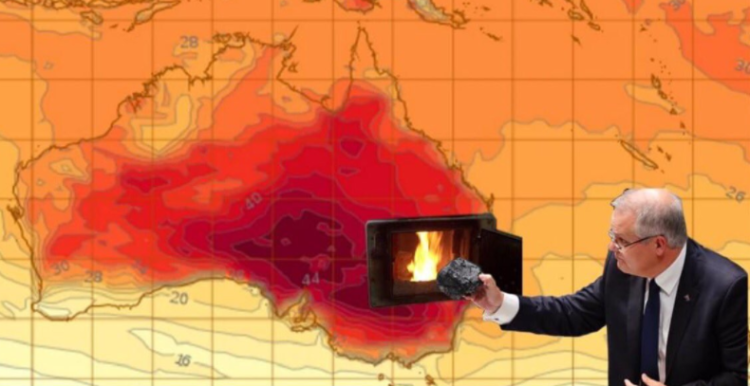 Fiddling with coal & other “partisan antics” while we burn: where is health, climate change in the “energy debate”?

The past week has been a frightening and difficult time for many in the midst of Australia’s latest extreme weather events, from flooding in Western Australia to a blistering heatwave across much of south-eastern Australia which has again broken records, seen more blackouts in South Australia, and fuelled bushfires across New South Wales which have destroyed about 30 homes. 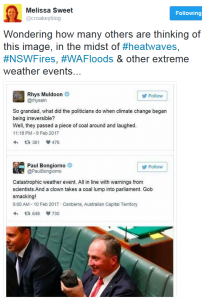 Not surprising then that many are invoking the image of Nero fiddling while Rome burned as the federal debate turned to energy security and featured Treasurer Scott Morrison brandishing a lump of coal in Parliament and accusing critics of “coalophobia” rather than entering a mature, complex, nuanced debate on climate change and energy policy. That was only underlined by this week’s revelation by Fairfax that Turnbull Government statements blaming last year’s South Australian blackout on its high renewable energy target ignored confidential public service advice stating that it was not the cause.

As Guardian Australia editor Lenore Taylor said of last week’s debate in this fact-checking article, we have been “enduring this climate war nonsense” for more than a decade. She said:

“Responding with a parliamentary pantomime to try to shift the blame to a fictitious renewable industry bad guy is true ideological idiocy and also negligent, because it puts the shallowest, shortest-term and most opportunistic strategy for political survival ahead of households, investors and future generations.”

Even over at the The Australian, in an article titled “The great coal hoax“, business commentator Alan Kohler slammed the Coalition, saying they have been “locked in a battle over a delusion for nearly a decade: that coal is cheap and renewable energy is expensive.”

“The academic, scientific, corporate, not-for-profit sectors have long ago accepted that the problem is real and are working towards a more sustainable future; the only ones not showing leadership are the nation’s leaders.”

On Monday a broad range of those groups issued a joint statement challenging all political leaders to stop “partisan antics” and work together to deliver reliable, affordable and clean energy. See the full statement below.

The signatories range from the Australian Aluminium Council to the St Vincent de Paul Society National Council and WWF Australia – a very broad coalition, though disappointingly there are no health groups among them.

(Croakey has put in a query on that to the organisers of the statement and will update this post with any response. A spokesman for the Australian Medical Association said he wasn’t aware of any approach to sign up, but noted the AMA’s strong policy on climate change and health, which was highlighted in its recent Budget Submission. It’s worth reading too this Guardian report that HCF has become the first Australian private health fund to divest from fossil fuels, having decided that the industry harms the health and wellbeing of its members.)

In this article for South Australia’s InDaily, Dr David Shearman argues why the health impacts of burning fossil fuels should be front and centre in the national debate on the future of the electricity network. Shearman, who is honorary secretary of Doctors for the Environment Australia and Emeritus Professor of Medicine at the University of Adelaide and the Royal Adelaide Hospital, says:

Doctors, too, are keenly interested in the security of energy. It is vital for the function of hospitals and necessary in home care for sleep apnoea and other chronic conditions. We also strongly recommend clean energy because the use of fossil fuels for electricity generation produces air pollution, leading to many deaths and suffering from heart and lung disease, with huge cost to health services. In addition, doctors want greenhouse emissions reduced rapidly, because the health effects of climate change will progressively affect us all.

Shearman was also quoted at the weekend by The Lancet, describing the proposed giant Carmichael coal mine to be built by India’s Adani Group, with a huge public subsidy, as a “public health disaster”. The Lancet article describes how Australia’s policy on climate change has “see-sawed from one extreme to the other” with prominent politicians regularly questioning whether climate change is real, “despite strong scientific evidence that it is already affecting parts of Australia”.

As US energy specialist Varun Sivaram pointed out in this useful interview on Radio National’s Late Night Live program, Australia has followed the partisan pathway of the United States on climate change (rather than the bipartisan approach of much of Europe, including the UK), with US President Donald Trump having signalled his intention to pull out of the Paris UN climate agreement and famously tweeted that climate change is a Chinese hoax.

But even the Republican cause is shifting ground on the edges there, according to a Fairfax interview with visiting former  Congressman Bob Inglis,who has helped to create RepublicEN, a group of conservatives and libertarians committed to “free-enterprise solutions to climate change”.

The article points also to this Wall Street Journal Op Ed offering A Conservative Answer to Climate Change from former Republican leaders George Schultz and James Baker. They suggest a four-pronged approach: 1. a gradually increasing carbon tax; 2. returning the tax proceeds to the American people in the form of dividends; 3. establishing border carbon adjustments that protect American competitiveness and encourage other countries to follow suit; 4. rolling back government regulations once such a system is in place. They declare:

“Controlling the White House and Congress means that Republicans bear the responsibility of exercising wise leadership on the defining challenges of our era. Climate change is one of these issues.”

Health impact assessment specialist Ben Harris-Roxas says the great challenge with the energy issue is that it is immediately framed around supply and energy markets. He told Croakey:

“Once that happens it’s difficult to consider the human cost, let alone the climate change and public policy implications of subsidies to carbon polluting industries.

Because of this any impact assessment of energy policy should focus on consequences and alternatives that look at the full range of impacts on humans and the environment. We have good examples of how this can be done, based on strategic environmental assessments of energy policy in Thailand and the UK and New Zealand. The issue isn’t technical ability to look at health impacts, it’s willingness to listen and the courage to kick down doors.”

One of those doors may lead to the Australian Energy Market Operator (AEMO). In this article, independent journalist Michael West is urging a greater spotlight in the debate on energy policy for the AEMO, whose board, he says, is “stacked with industry executives, consultants and directors from Big Law and Big Four accounting, whose firms earn millions from advising the power giants”.

Perhaps the Australian Government could start to “bear the responsibility of exercising wise leadership” by including broader groups, including the health sector, on that body.

Representatives of Australian communities, including civil society, households, workers, investors, business energy users and energy suppliers today challenged all political leaders to stop partisan antics and work together to reform Australia’s energy systems and markets to deliver the reliable, affordable and clean energy that is critical to wellbeing, employment and prosperity.

There is simply no room for partisan politics when the reliability, affordability and sustainability of Australia’s energy system is at stake.

The finger pointing will not solve our energy challenges. More than a decade of this has made most energy investments impossibly risky.

This has pushed prices higher while hindering transformational change of our energy system. The result is enduring dysfunction in the electricity sector.

We need mature, considered debate. Market reform can’t happen unless the Commonwealth and States agree, and policies can’t last and motivate investment without broad cross-party support. Politicians from all sides of politics and all levels of government need to come together to work through the necessary solutions to our energy market challenges. COAG has already established a strong policy process for this – the Finkel Review. Politicians need to back it and work with it.

As energy stakeholders we must also play a key role in resolving these issues. All Australians have a stake in success and we must and will provide our politicians with leadership, guidance and support to advance the long-term interests of a prosperous economy, environment and society.

As the Preliminary Report of the Finkel Review correctly notes, many of the technological, economic and consumer trends transforming our energy systems are irreversible. Policy and market designs need to evolve if investors are to deliver the energy services Australians require at a price they can afford. A raft of reforms are needed to encourage and support flexibility throughout the system. The next stage of the Finkel Review should be an opportunity to explore these possibilities and develop a comprehensive and integrated suite of reforms.

Policy should be implemented promptly with broad based political support.

There is broad agreement across Australia’s energy users and suppliers on the urgency of fixing the situation. All sides of politics and all levels of government share responsibility for the current state of our energy systems – and for taking action with the energy industry and its customers to improve it. A collective failure to act would come at a cost to all Australians.

PrevPreviousShare the love! Time to send some Health Policy Valentines
NextTime for accountability from PM in response to another poor ‘Closing the Gap’ performanceNext