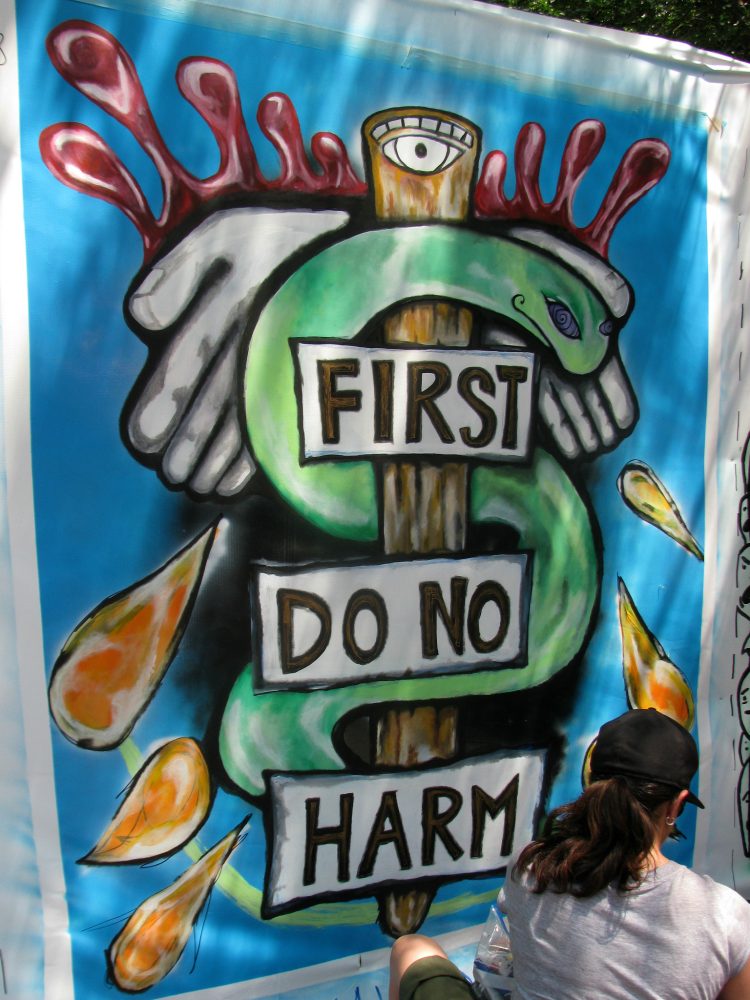 First, do no harm – the golden goose of out-of-pocket expenses

The Hippocratic Oath requires physicians to first, do no harm, but what about hitting them where it hurts most — the hip pocket?

In this piece for John Menadue’s Pearls and Irritations blog, and reproduced here with permission, Professor Peter Brooks from the University of Melbourne’s Centre for Health Policy takes a look at out-of-pocket expenses and the Wild West of medical fee-gouging.

This lead article in a recent issue of the Medical Journal of Australia could be seen as an interesting reflection of how physicians view their worth in Australian society.

The study, from Freed and Allen (University of Melbourne) looks at data from Medicare generated in 2015 for initial consultations by physicians (specialists). Their overriding finding is the wide variation in fees charged both between specialties and within specialties, as well as between states and territories.

The highest median out-of-pocket cost was for an initial consultation for immunology/allergy ($141.70), and the lowest was for geriatric medicine ($58.30).

This variation in the fees charged is very difficult to explain. Even moreso are the differences within a specialty, when on average doctors are seeing roughly the same range of disease complexity.

Surely it is about time that we demanded that doctors start to justify these fees, and if they cannot the Government and other groups such as the health insurance industry must start persuading them that fee gouging and greed will not be tolerated.

A disincentive for private insurance

This paper is important, as it shows for the first time the variation in fees charged to patients when seen in a clinic outside a public hospital.

It also comes at a time when there is increasing focus on out-of-pocket expenses in the health care system, which now total around $23 billion per year and are one of the fastest growing parts of the health care budget (though of course not in the capital-B budget or even mentioned by politicians, since it is we who pay these fees).

This issue might also be considered by state health departments, who actively encourage public hospitals to charge private patients admitted to public beds. From the public hospitals’ perspective it sounds a good deal, but this example of cost shifting – at which Australia excels – may not be smart in the long term.

What the market can bear

Interestingly, the issue of out-of-pocket expenses (OOPs) has usually focused on general practitioner fees, which are really small beer in comparison to fees levied by surgeons (often thousands of dollars, but of course as a one off — hopefully — for a surgical procedure).

If you think about it, a gastroenterologist who does 10 endoscopies in a morning and adds $400 as an OOP on each is doing pretty well.

Returning to fees charged by physicians: Freed and Allen found most specialties bulk-billed between 30 and 42 per cent of visits, with the highest rates in haematology (60%) and medical oncology (53%). The lowest was in geriatric medicine (17%).

Doctors in the Northern Territory bulk-billed 76% of visits, a greater proportion than anywhere else, while bulk-billing rates in New South Wales and South Australia were just above 40%. Western Australia was the only state with a rate below 20%.

Within each specialty, the average range of charges varied by over 70%.

Doctors’ fees are always hard to comprehend and have been the subject of previous articles at The Conversation.

The Medicare rebate is determined by Medicare, 85% of which is accepted by the doctor if they bulk bill. The AMA sets another fee schedule significantly higher than Medicare, and the individual practitioner charges what they feel the market can bear.

This is most unfair to the patient who has no idea of what an appropriate fee is or, even worse, what other practitioners charge for the same or equivalent procedure. And of course the doctor provides absolutely no outcome data (for example what is the success/infection rate of the procedure and the average length of stay) which might be helpful in deciding who a patient might see, let alone pay a significant out-of-pocket expense.

Hitting the most vulnerable

OOPs have escaped much media attention and very little comment from government despite a Senate inquiry last year which sadly made few recommendations, and none in relation to how doctors should transparently inform patients about the OOPs they are about to incur.

A Grattan Institute review of OOPs has highlighted that there are many better ways to address rising health care costs, and that OOPs impact on the most vulnerable in society.

According to a recent OECD Report OOPs account for 20% of expenditure on health care in Australia, slightly higher than the OECD average of 19%. By contrast, out-of-pocket costs account for only 10% of health spending in the United Kingdom, 13% in New Zealand and 14% in Canada, all of which have similar government-funded health systems to ours. Out-of-pocket costs also comprise a low proportion of health spending in France (7%), whose health system is largely funded by social security.

The share of health expenditure made up by out-of-pocket costs increased in Australia by 1% between 2008 and 2012.

Egging on the golden goose

The interesting thing about this data on OOPs is the variation between doctors, even within a given specialty. We also see this with in-practice variations.

The profession is starting to think about this, but is still not willing to promote it for public discussion. This is addressed to some extent in a companion article in the MJA, and the Royal Australasian College of Surgeons did make some comments last year regarding high surgical fees, though little progress appears to have been made.

We do have a problem with OOPs.

This issue has been around for a while, and patients should understand they have a right to question these fees. But it has now reached the point where there is good evidence that OOPs are starting to impact on private health insurance rates, and on the ability of patients (particularly those with chronic disease and with lower incomes) to access appropriate care.

These two issues alone are likely to impact significantly on the public health system and upset the balance between public and private health care, to the detriment of all. Not for the first time will the golden goose (an unchecked fee-for-service payment system) be sacrificed by those who gain the most  – private specialists. And it will hurt everyone, particularly patients.

First, do no harm

What are the options in an environment where under the Australian Constitution, the government is unable to (easily) control medical fees?

We could change the Constitution — very costly and time consuming, though with a volatile electorate it might just get up. But what might be easier, at least in the first instance, is government-mandated transparency.

First, Medicare could publish the annual billing income of every doctor in Australia online – after all, it is our money. This will not tell you how much each doctor earns, but would flag the importance of transparency. Interestingly, you can access the world wide web and see what every doctor in the US earns from Medicaid.

Secondly, the Government could require that for any Medicare item worth/billed at over, say, $1500, reimbursement would only be provided if 3 quotes were submitted. These second opinions could be funded at a lower rate and done as teleconsultations. That could be a circuit breaker – and watch the ACCC sharpen their interest if there was any fee collusion.

Thirdly, doctors should be required to provide patients with a written list of ALL out-of-pocket expenses in a timely manner before the consultation/procedure (cue anaesthetist complaints because, in their case, it can be a corridor consultation when one is half-doped before the procedure).

When it comes to the professions, the Royal Colleges and other professional groups could promote this themselves, but they have been pretty silent thus far, except for a small foray from the surgeons. So they need a nudge.

The Royal Australian College of Physicians responded to the recent MJA article by saying it ‘does not comment on individual fees physicians charge in their own right.’

Surely there is an ethical issue here. The Hippocratic Oath says ‘first do no harm’ — what about significant financial harm to patients?

This issue is not going away and we all – doctors, health professionals, governments, health payers (particularly the private health insurance industry ) and most importantly, patients — need to work together to ensure our health system, which still has some of the best outcomes in the world, continues to perform for ALL Australians. Not just those who can afford to pay, and not just for specialists.

If all of the above fail to work, perhaps we could consider what Pierre Trudeau and his government did in 1984. They took on a system not dissimilar to ours — uncontrolled fee-for-service — and legislated that doctors could charge what they liked BUT unless they adhered to the fee negotiated between the Provincial Government and the profession (on an annual basis) the doctor lost all access to a Medicare reimbursement. This system still works today in Canada and few doctors opt out of it.

Now there is a thought — and a significant game changer.

Peter Brooks FRACP is a Professor at the Centre for Health Policy , Melbourne School of Population and Global Health.