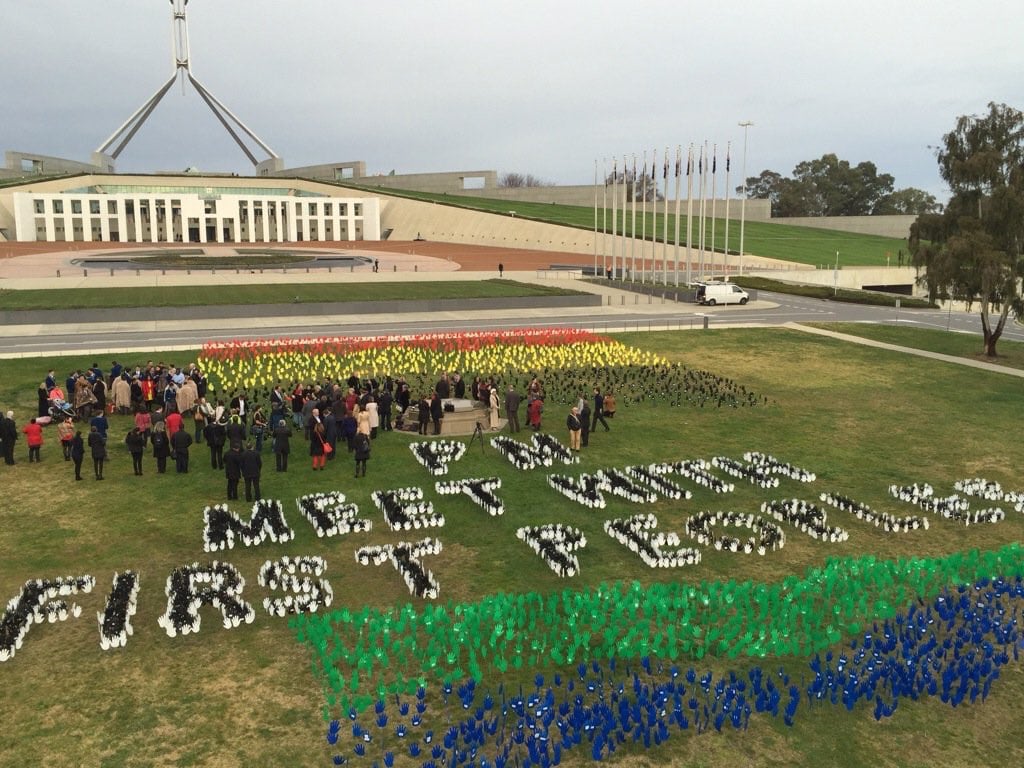 As the 45th Parliament — our most Indigenous ever in composition — gathers for its first sitting, Australia’s Aboriginal and Torres Strait Islander community has thrown down a challenge to Prime Minister Malcolm Turnbull: genuine engagement as a meeting of equals.

Building on the momentum of the Redfern Statement, Sally Fitzpatrick and Megan Williams urge all Australians to get behind the #FirstPeoples1st100Days movement for meaningful dialogue with Aboriginal and Torres Strait Islander people.

A meeting of equals is proposed where the Aboriginal leadership will present a signed Redfern Statement to the Prime Minister, and outline principles of engagement for a new way to do business.

A new governance arrangement with oversight and integrity with respect to Aboriginal and Torres Strait Islander affairs is called for, that accords with the right to self-determination.

At its core, the call is for the Prime Minister to critically reflect on his relationship with First Peoples’ elected leadership. The present governing relationship between the government and Aboriginal and Torres Strait Islander peoples is tense and demoralized, for Aboriginal people at least. The Torres Strait Islander Regional Authority is a unique arrangement worthy of a story in itself.

.@congressmob seeks a new relationship with Government. "With us, not to us". https://t.co/KWCaoo3xPo #auspol #FirstPeoples1st100Days

It has been shocking to learn that during the previous term of government only one meeting occurred between the Prime Minister and Congress chairs. It was cordial, but nothing could be concluded. Congress now faces funding uncertainty and questions as to its representativeness.

The situation is now considered so grave that a broad social media campaign has been launched, and all Australians are invited to get behind this campaign by following and promoting the #RedfernStatement and #FirstPeoples1st100Days hashtags.

One strategy proposed by the campaign is for organisations to defer their business with the Australian government in relation to Aboriginal and Torres Strait Islander matters, until the Prime Minister has substantially committed to the meeting with Aboriginal and Torres Strait Islander representative organisations. They could indicate such support by endorsing #FirstPeoples1st100Days on social media.

The #FirstPeoples1st100Days campaign follows the landmark #RedfernStatement made in June this year by an unprecedented coalition of Aboriginal and Torres Strait Islander peak organisations:

We stand here as Aboriginal and Torres Strait Islander peak representative organisations with a deep concern:

That in 2016 First Peoples continue to experience unacceptable disadvantage;

That the challenges confronting Aboriginal and Torres Strait Islander people continue to be isolated to the margins of the national debate;

That Federal Government policies continue to be made for and to, rather than with, Aboriginal and Torres Strait Islander people; and

That the transformative opportunities for Government action are yet to be grasped.

Stand with us to let this statement be heard and acted upon by our nation’s leaders.

The Redfern Statement outlined clear policy imperatives identified by sector leaders and has received broad support from civil society organisations. It will remain a work in progress to encompass the diverse expertise of Aboriginal and Torres Strait Islander peoples. Its priorities form the undercarriage to new governing arrangements Aboriginal and Torres Strait Islander people are calling for.

In the momentum that followed the Redfern Statement, a second Communiqué was issued on 24 June, calling for two specific actions within the first 100 days of the new government.

The first action:  A call specifically to the Prime Minister, for a meeting between Malcolm Turnbull and the elected representatives of Australia’s First Peoples, and a Coalition of Aboriginal and Torres Strait Islander leaders and organisations.

The second action:  For the Federal Government to join a National First Peoples Summit to progress the Redfern Statement hosted by the National Congress of Australia’s First Peoples. 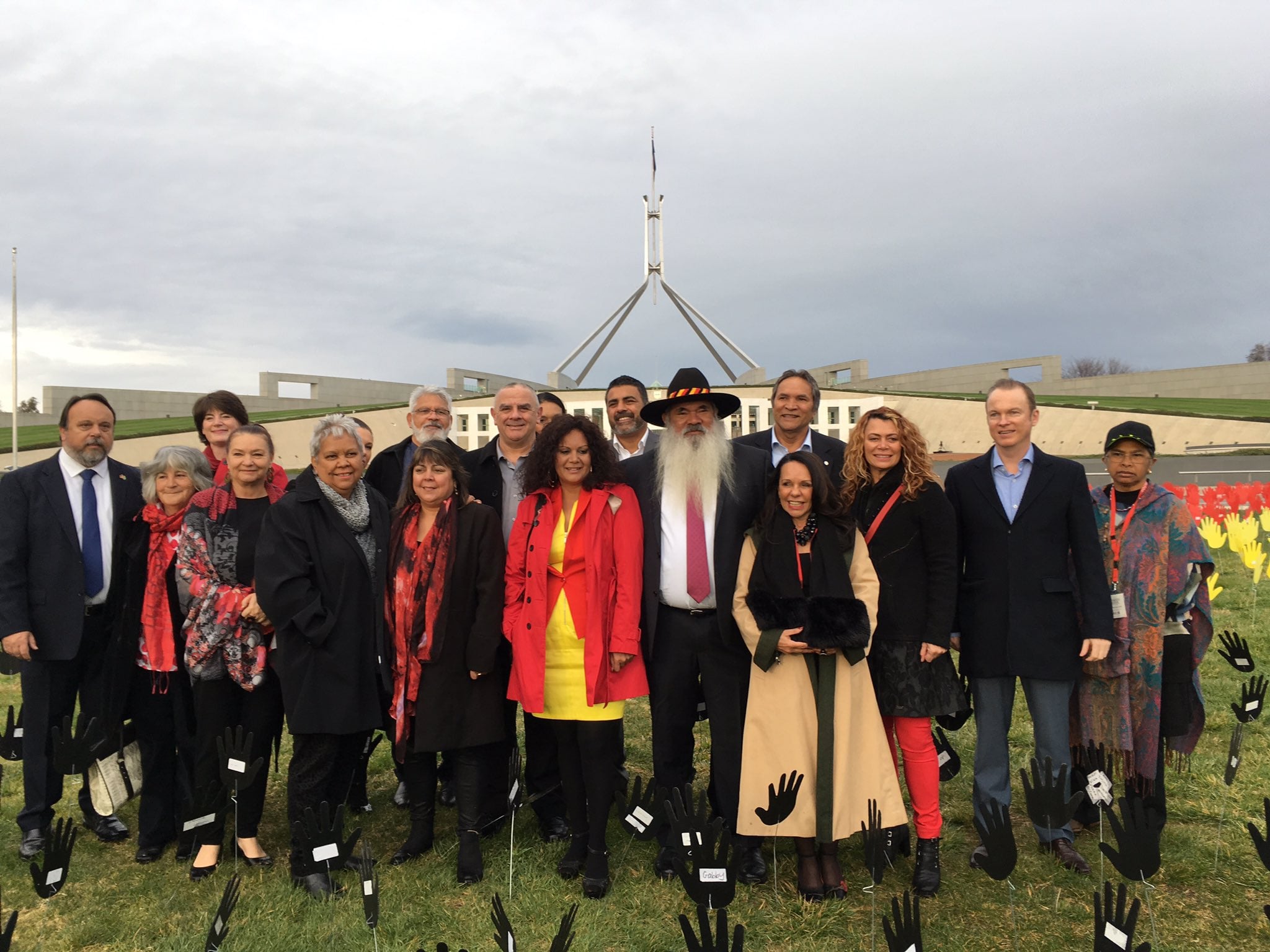 More information about how you can support these calls can be found at #FirstPeoples1st100Days.

Looking back to move forward

Not unsurprisingly, the present level of engagement between Congress leaders and the Prime Minister has fallen far short of expectations.

It has not resulted in any funding toward the Implementation Plan for Aboriginal and Torres Strait Islander Health Plan 2013-2023, despite the hard work of Congress members, their allies and the Commonwealth’s own department to maintain this agenda.

The disastrous Indigenous Advancement Scheme overseen by Prime Minister and Cabinet is a key example of the damage wrought by lack of effective engagement, despite the scheme being hosted by a department whose mandate is coordination.

The end of the 2015-2016 financial year – with the government in caretaker mode – was marked by yet more closures of Aboriginal and Torres Strait Islander community controlled programs and organisations.

These programs and organisations grew from community initiatives in the face of identified needs, and, unlike many top-down approaches, provided much-needed services in response to those needs, as well as social and cultural development in their communities.

While there are arguments to support program rationalisation, the Commonwealth’s current approach contradicts their own research, for example into programs that promote social and emotional wellbeing among Aboriginal and Torres Strait Islander young people, published in 2013.

As well as recommending a long-term commitment and perspective with close attention to workforce development and infrastructure, this research generated four sets of critical success factors of effective programs.

These critical success factors have now been combined into an auditing tool being trialed in numerous community settings around the country.

While recent calls for better evidence of program and policy success are well justified, just as important is reform of the public service, which has been decimated by politicization and managerialism.

This situation is acutely felt by Aboriginal people, towards whom the Commonwealth’s power to make national laws has not always been dealt justly, and for whom gesture politics has become a norm.

For example, models of engagement between departmental officials and communities under a lead agency approach are extremely vulnerable to changes in key personnel, and the conflicting priorities arising from multiple changes of government.

This is further exacerbated by the constant churn of public service employees through different departments resulting in projects that remain unfinalised. One example is a series of resources designed with members of the Stolen Generations to improve aged care outcomes.

The Stolen Generations Working Partnership was a multisectoral response to the unfinished business of the Bringing Them Home report. It undertook several projects, including one in partnership with Former Child Migrants and Forgotten Australians.

Yet over five years later, the project remains incomplete. Commissioned under Labor, the launch of a series of aged care resources has been exacerbated by changes in government and the need to redo logos and artwork as each department for the ageing changes its name. To publish the resource today would require it to be reviewed and updated. Departmental officials continue to utter assurances that they see the resource as a priority.

If we look even further back to the Social Justice Package put together to resolve structural inequalities arising from native title, we find that both sides of politics have now dumped it.

Given this, is it not ironic that we entrust our futures to governments, and generate yet further research and evidence for them, when governments in fact operate ahistorically? This should lead us to consider further legislative frameworks, like treaties, to get this work done. There are broader issues at play.

The current call for a meeting of equals between elected leaders should be a wake up call as Australia grapples with the concept of recognition.  What is recognition if it is not demonstrated by respect for the elected leadership of Australia’s First Peoples?

We have tried the well-worn path of campaigns, causes, inquiry submissions, reports, and recommendations with their limited political shelf life.  We ask who is listening to the voices of Aboriginal and Torres Strait Islander peoples? Where is the respect for the hours of effort, including by thousands working in a volunteer capacity, in generating successful community-based solutions.

In seeking to formalize this nation-defining relationship, we must ask ourselves what are the kinds of things we can do now, that accord respect for all voices amongst groups within our influence?

The current dire state of engagement is not a chance for us to let our own standards slip. To forget. Because as individuals, we already know what works.

We learn again through translating these experiences into our professional lives, in our case as public health academics, through community research priority setting, embracing the National Health and Medical Research Council’s Values and Ethics, promoting two-way knowledge exchange, upholding the Cultural Respect Framework and more. All these practices help to guide us to a better way.

From our own experiences, we have felt and we know the value of respect and of relationships in our own communities and workplaces, and how things can be done differently.

So, we cannot wait for government. The #RedfernStatement and #FirstPeoples1st100Days provide an opportunity for moving forward.

Supporting Aboriginal and Torres Strait Islander people to determine the present is an investment in our country’s future.

This is a call for genuine engagement.

Take a moment to share your thoughts on social media, or post a letter to Malcolm with a copy to your local MP. Support the #RedfernStatement and #FirstPeoples1st100Days.

Sally Fitzpatrick and Megan Williams are based at Western Sydney University’s Centre for Health Research.

Sally Fitzpatrick co-authored the Aboriginal and Torres Strait Islander Youth Social and Emotional Wellbeing report and was a delegate of the Stolen Generations Working Partnership Forum.

PrevPreviousA role for all doctors in Closing the Gap
NextFantasyland or a Fair Go? Michael Marmot on QandANext