Last week a strong voice on housing for Aboriginal people in the Northern Territory was launched with the incorporation of the Aboriginal Housing NT.

Aboriginal Peak Organisations of the Northern Territory spokesperson, John Paterson, said the initiative will enable Aboriginal leaders to make decisions on housing needs and other social determinants of health. He said in a statement:

If we are going to make any inroads into addressing the backlog of housing and overcrowding in the NT, we need Aboriginal leaders to be at the decision making table, having effective and genuine partnership with all levels of government and other stakeholders.”

The need for Indigenous led solutions to overcrowding in the NT was one of five big takeaways from last week’s National Housing Conference in Darwin for Kate Colvin, outlined in the post below.

Colvin is spokesperson for the Everybody’s Home campaign, which was relaunched at the conference, and Manager of Policy and Communications, at the Council to Homeless Persons in Victoria.

See also Peter Mares’ report at Inside Story from the National Housing Conference, where he writes that “like climate change, housing is in the political too-hard basket, acknowledged as a pressing national problem but tackled in a piecemeal and ad hoc manner”.

Over 1,000 delegates converged on Darwin last week to talk about how to fix Australia’s housing problems. My five big takeaways are:

1. Overcrowding in housing in remote Aboriginal communities and in NT’s towns and regional centres is shocking

Even more shocking is that this problem has existed for decades, and hasn’t been fixed. Earlier this year, the Federal Government committed to refund remote Indigenous housing in the Northern Territory, but allocated only a fraction of the money needed. The Federal Government has still not refunded housing in remote communities in South Australia, Western Australia or Queensland. 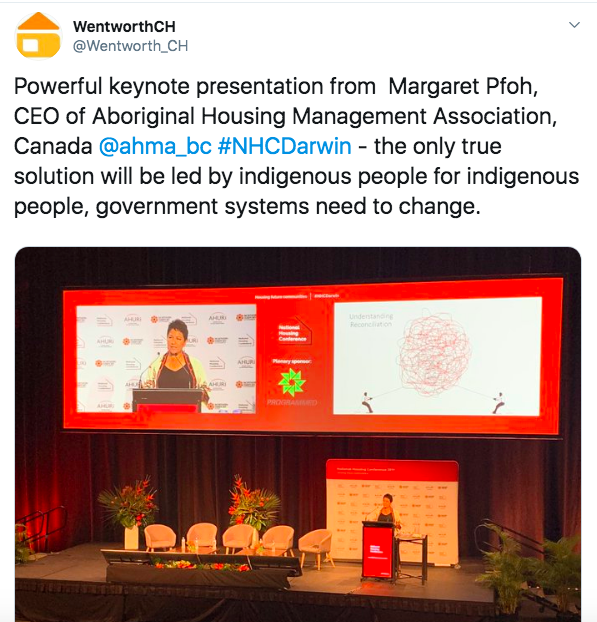 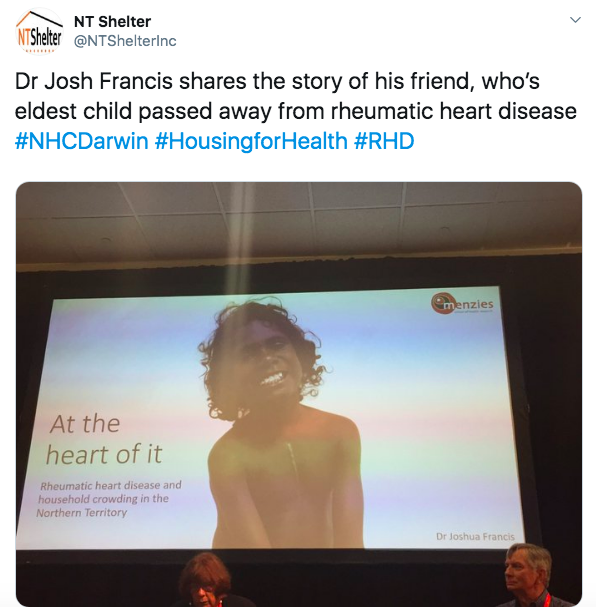 That it means more women and children are killed or injured because they can’t escape domestic and family violence. 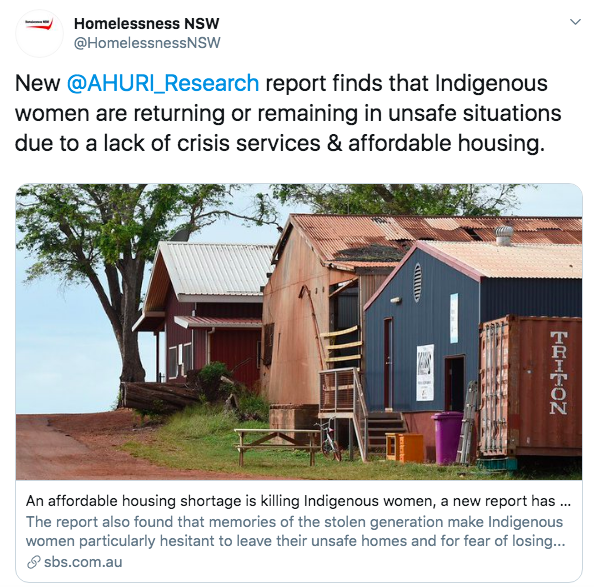 And that the state, which has failed to deliver the housing needed to keep Aboriginal children safe, then takes children away because of their lack of safety.

Margaret Pfoh shared a powerful message from Canada. Her organisation is delivering housing that meets the needs of Aboriginal communities because Government funding is being controlled by Indigenous people for Indigenous people. 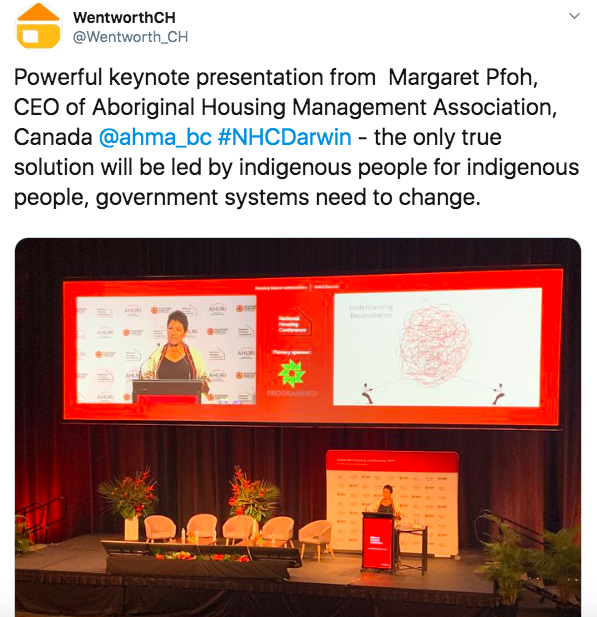 2. How good is a bond aggregator!

Australia’s newest housing policy instrument; the National Housing and Finance Investment Corporation – or NHFIC – might not be the sexiest policy, but it is nonetheless a GOOD THING.

For those not in the know, the main bonus of the NHFIC is that it is a bond aggregator. In other words, it sells bonds to private investors, and then uses the money to provide cheap finance to community housing, which makes it cheaper for community housing providers to borrow money to build housing. How good is that! 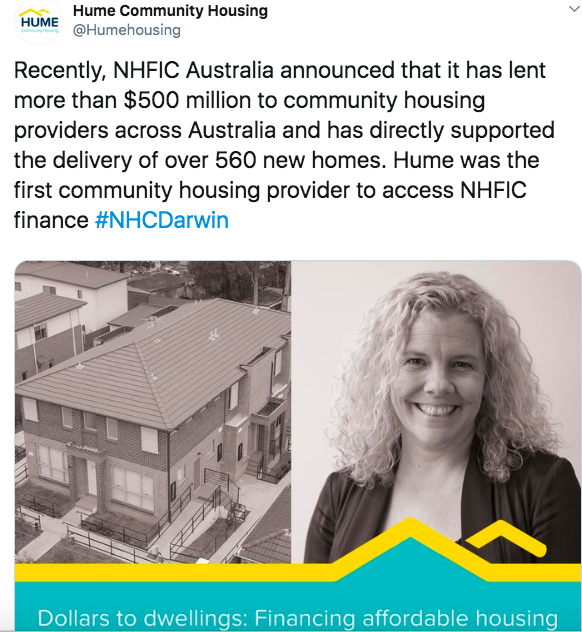 3. Any model of funding for social housing will require government subsidy 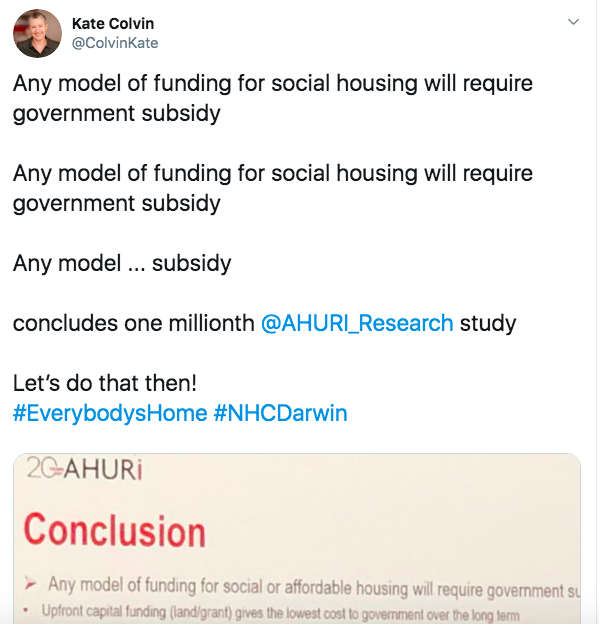 The NHFIC makes borrowing money cheaper, but that isn’t enough. Community housing can’t borrow money to build lots of housing when building and operating it costs more than people can afford to pay in rent.

The gap between the cost of delivering new social housing and affordable rents is called the ‘subsidy gap’, and it’s the single biggest problem in housing policy. 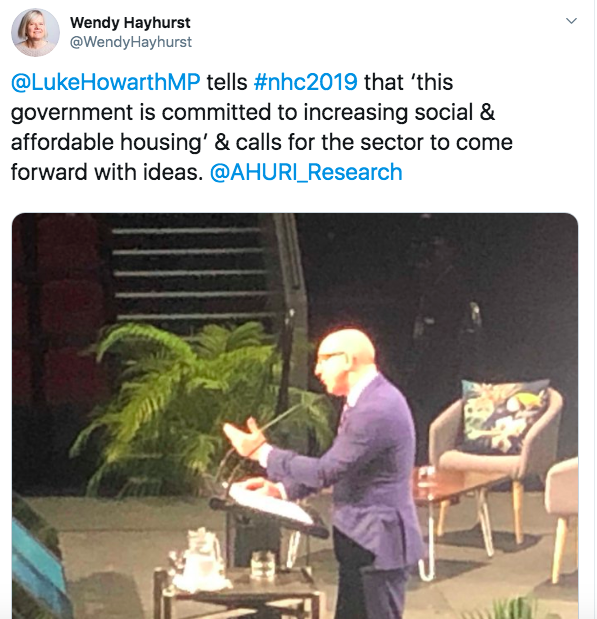 But AHURI’s one milliontieth academic study concluded what all the others have done: you can’t grow social housing without funding the subsidy gap.

4. Not only did New Zealand smash us in the Bledisloe Cup, but they are also smashing it out of the park in housing policy – and so are Canada and Ireland

To really fix a broken housing system you need federal leadership. And you need state and local governments to work together. And you need to fund the subsidy gap, and use all your other policy levers to sort out the god almighty mess of increasing homelessness, growing numbers of people paying more rent than they can afford, and declining home ownership.

That’s what they are doing in New Zealand, and in Canada, and in Ireland. Lots of other places too actually, but what we have in common with these three nations is that also got themselves into an Australia-like housing pickle. But then they turned it around.

The political traction that made federal governments in each of these countries create a national housing strategy didn’t happen because a politician woke up in a good mood one day, or because they got a new report of evidence that housing is good for people.

Everyone knows housing is good for people. And political moods are a function of popular approval.

Great advocacy in each country convinced voters that they wanted reform. And then the voters’ hunger for change drove political action. 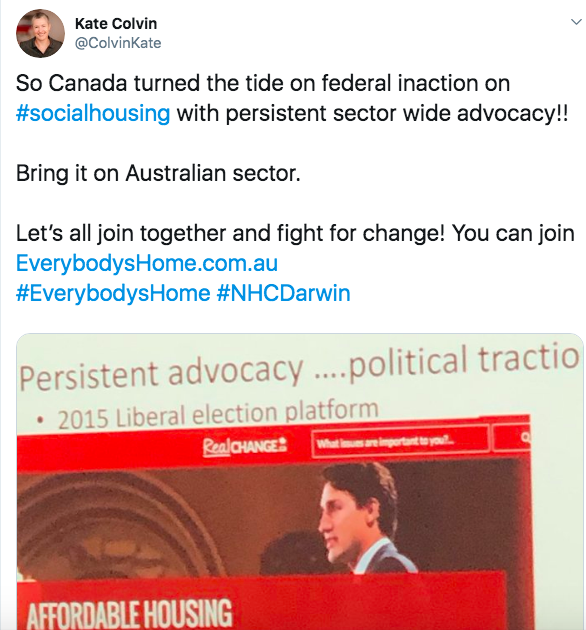 In Canada and Ireland the mood for reform was also spurred by rough sleepers literally dying on the steps of Parliament – a shocking symbol of government failure.

In Australia, women and children unable to escape violence, and people who are chronically ill and sleeping on the street or in dangerous rooming houses, die every day because of our housing failures. We are so used to it we are numb to the outrage we should be fuelling.

This final takeaway is that we have to fight for the change we want. As a homelessness and housing sector, as allies, as people struggling with the effects of a broken housing system, and as citizens who want a fairer, stronger community, we have to band together and give it our best shot.

At the Housing Conference we relaunched the Everybody’s Home campaign and we will fight until we get the job done. I invite you to join us – and together we can fix our broken housing system.