Five options for health reform: what are the chances?

Five options for health reform – which are not mutually exclusive – are proposed in the Reform of the Federation Discussion Paper, which has been released for public comment.

Although the paper states that “the order in which the options appear does not indicate any preference”, predictably enough, it is option one that is getting all the public attention, helped along by a Prime Minister who generally gives every impression of believing the role of government is to eliminate that role. 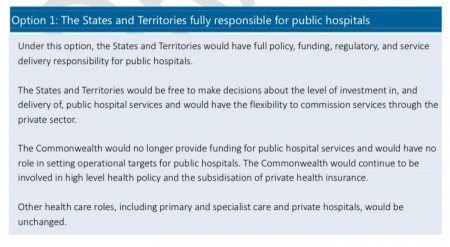 The other options up for discussion are: 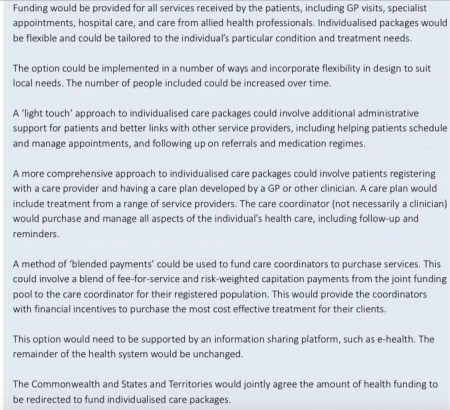 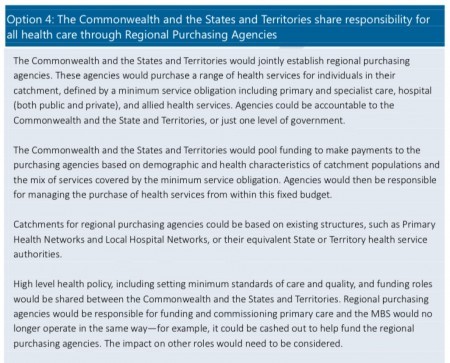 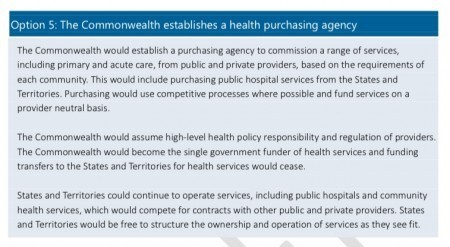 The options were developed out of discussions at stakeholder roundtables and consultation with the States and Territories and the Prime Minister’s Expert Advisory Panel.

In the current political climate – and given how much “reform capital” the Federal Government has blown in abandoning national health agreements, the chances of a sensible conversation or process arising out of the paper seem minimal. But perhaps those moments that enable real reform arise when least expected. We shall see.

Meanwhile, the paper also reveals that one of the options considered – but not put forward – was the introduction of a managed health care market, like the Medicare Select option from the National Health and Hospitals Reform Commission in 2009. However, the paper noted that this option would require significant structural reform with a long implementation period and significant transition costs.

• The need to recognise jurisdictional diversity, improve accountability, and improve how governments work together.

• The need for both mainstream and Indigenous-specific services to work better through more integrated planning, better coordination between levels of government, and greater focus on community-based programmes.

• Across the board, participants held strong views that all levels of government need to re-think the way they work with Indigenous communities—it is vital that local people have a role in developing and implementing local solutions.

• Aboriginal Controlled Community Health Organisations were held up as an effective model. Some frustration was expressed that some of these organisations have lost funding for their policy role, when this was a critical element of their success.

• Community-based solutions are only possible with strong local leadership. Governments have a role to play in building the capacity of Indigenous communities through, for example, making better use of the VET system to diversify the skill base, keep students in school, develop young leadership, and bring skilled leaders back into regional and remote communities.

• Participants said there is a strong national interest argument to be made for ongoing Commonwealth involvement in Indigenous Affairs, in terms of both funding and leading national policy and standard setting.

• Participants also noted the importance of funding certainty and access to data. Funding for Indigenous services needs to reflect the relevant share of costs, not just a population share.

Previous articles at Croakey related to Federation and health reform

• Getting the facts right

• Federation reform and opportunities for health