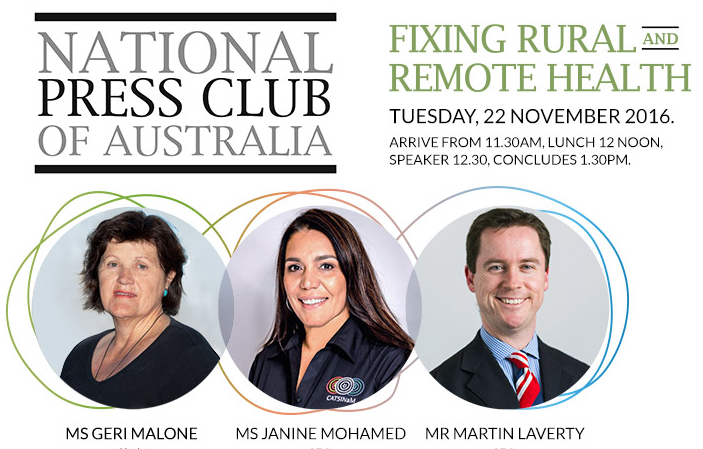 This is the first article in a Croakey mini series on rural and remote health, following the launch this week at the National Press Club of the National Rural Health Alliance’s five key priorities for ‘Fixing Rural and Remote Health’ (see the full statement below). 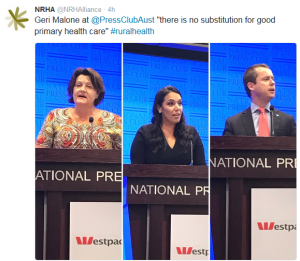 The series will feature speeches delivered at the launch from:

It was clear that there are high expectations for the Federal Government’s yet-to-be-appointed Rural Health Commissioner – a key 2016 election promise announced by the National Party, to ‘act as a champion for rural health causes’.

Speakers said the role must be set up for success and judged on whether it leads to reduced health inequalities in rural and remote Australia compared to metropolitan Australia, with the need to address the social determinants of health, including poverty, inequality, racism and prejudice.

(Croakey has asked the office of Health Minister Sussan Ley for details on when an appointment is likely and will update this post when we hear back.)

Each of the speakers outlined personal stories and case studies to illustrate problems and solutions in rural health care. Among their key points:

Malone said Australians, including our politicians, attest to having a strong affinity with the bush – “they  like to romanticise the lifestyle, reinforce the myths and promote the romantic images of the bush, and they wear the Akubras and moleskins  to prove they do”.

But she said in reality that connection was superficial.

“Scratch the surface and the actual investment in services be they health,  education, communications and business is tokenistic at best.”

Her view was reinforced by the fact that no mainstream political journalists attended or covered the launch and that a media conference by the Prime Minister Malcolm Turnbull scuppered plans to broadcast it live on ABC News 24 TV.

However you can watch it now on iView (till 6 December).

– This will dramatically improve participation and productivity, and increase Australia’s economic growth.

– Focusing on workforce incentives to attract and retain valuable health professionals in rural and remote areas would pay for itself through increased productivity and economic growth, driven by healthier rural and remote residents.

– We need greater focus on improving child health, education, and wellbeing and to support indigenous families to give them the best start in life. It should involve a holistic early childhood strategy which informs high quality, locally responsive and culturally appropriate programs with stable, long term funding.

– The Alliance applauds the fact that the Government has used a weighted population formula in distributing funds to the PHNs. And they need long-term contracts to attract quality staff and ensure certainty for communities.

– The Alliance believes that the best investment in the long term health and wellbeing of children, Australia’s future, is in ensuring they have the best possible start in life.

– We should build on the First 1000 Days program, which targets Aboriginal and Torres Strait Islander communities, as an exemplar program to support women and children across all communities.

PrevPreviousThe Health Wrap: the right to healthy food; new and old stories; where we live
NextIntroducing the JustJustice book – a sneak preview of the major themes and calls to actionNext