In this month’s instalment of JournalWatch, Dr Melissa Stoneham discusses an article focussing on the inclusion of flavours into tobacco products as a strategy to recruit new users.  In particular, the article highlights this strategy as targeting both women and African-American in an attempt to widen the market base for cigars and small cigarettes.

Take a look at this picture. 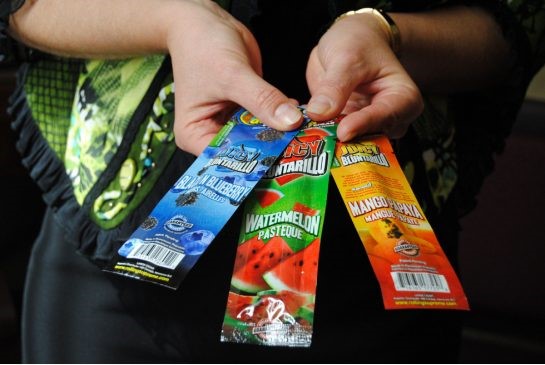 At first glance what do you think the product is? Was your guess lollies? Ice-cream? Drinking yoghurt maybe? All of these would be believable. Yet these are fruit flavoured tobacco products. In this month’s JournalWatch, I am going to take a look at the tobacco industry’s use of flavours to recruit new users of little cigars and cigarillos – or little cigars- (LCCs).

The journal article that has sparked my interest in this area was led by Ganna Kostygina and published in Tobacco Control. Kostygina and her team, who are based at the Center for Tobacco Control Research and Education in California, have used the article to examine the evolving strategies used by tobacco companies to encourage uptake of flavoured LCCs and to describe industry research findings on consumer perceptions of flavoured LCC products.

So let’s look at the context for this article.

The 1964 Surgeon General’s Report of Smoking and Health emphasised the harms of cigarette smoking, with cigar smoking having ‘little significance’ compared with cigarettes. Evidence now indicates that cigars contain the same toxic and addictive substances as cigarettes.

While cigars are sometimes viewed as safer than cigarettes, the National Cancer Institute advises that cigar users are at a higher risk than non-smokers of developing lung cancer and heart disease. Compared to non-smokers, cigar users’ bodies have elevated levels of metabolized nicotine, cadmium and tobacco-specific carcinogens and are at risk of cancers of the mouth, throat, larynx and oesophagus, with risk levels similar to cigarette smokers.

In 2009, a federal law banned candy and fruit-flavoured cigarettes in America. However this prohibition did not include cigars, cigarillos, smokeless tobacco and e-cigarettes. Tobacco companies took this opportunity to market an array of cheap, sweet and colourfully packaged cigars, which often look and are smoked, just like cigarettes. These cigars come with flavours such as chocolate, strawberry, peach and cherry and names such as “Swisher Sweets.”

WHO has stated that flavours can mask the harshness of cigar smoke, making them easier to inhale for new smokers and thereby increasing the perception of their relative harmlessness, and increasing the likelihood of young people becoming addicted. This is an important point, because the long-term viability of the domestic tobacco industry really does depend on recruiting new, younger users to replace those who quit or die.

The authors of the paper provide evidence to support these statements. They analysed previously secret tobacco industry documents from RJ Reynolds (RJR), Philip Morris (PM), British American Tobacco, Lorillard and U.S. Smokeless Tobacco Company (USST, formerly United States Tobacco Company) on the development and marketing of flavoured non-cigarette combustible products to determine not only the purpose of flavoured additives in LCCs, but also what role flavours played in LCC product use.

A total of 251 documents that specifically related to flavoured tobacco products and which were dated between 2010-2013, were scanned. These were then organised chronologically and thematically to identify common themes.

These findings mirror the tactics of cigarette companies. The only difference is the product – flavoured cigars rather than favoured cigarettes. The aim remains the same – to increase consumption.

Let’s take some examples from the journal article. The scanned industry documents identified that the tobacco industry was releasing flavoured products specifically targeting young people and that the industry recognised the importance of the youth market to tobacco industry growth.

One of the quotes within the article was “Consolidated Cigar has introduced two new cigars aimed directly at youth. Elite Cigars “for today’s young, contemporary smokers” and Tipalets, a burgundy flavored “new thing in smoking.”… Both Consolidated and Bayuk Cigars are complementing their youth-oriented campaigns with record albums and other premium offers.”

As with cigarettes, it was found that the cigar companies tried to achieve female acceptance with flavours, slimmer cigar shapes and milder tobaccos. Initially, marketing techniques such as promoting mildness and acceptability among women to appeal to young men were used, but eventually women were portrayed as cigar users and female celebrities were promoting the flavoured cigars publically.

Of course, these marketing tactics worked. A recent study found that the top five most frequently smoked brands of cigars all fell into the cigarillo/little cigar category. In Canada, about 52% of young tobacco users said they had used flavoured products in the month before they filled in a survey at school.

The evidence from the scanned industry documents within the journal article, also revealed that consumers perceived mint and menthol cigars to be less harsh and more acceptable to smokers, and flavoured tobacco products, when compared with cigarettes, were perceived to offer benefits including health, change of pace, easy draw, good taste, lack of irritation, relaxing, pleasing aroma, enjoyable without inhaling, pleasant in the mouth, helped cut down smoking and were low in tar and nicotine.

There are always lessons to be learnt from past industry tactics. The difference with the flavoured tobacco products, at least in countries like America and Canada, is they are still available on the market and are being promoted in spaces that attract young people.

For example, the Executive Branch cigarillo was endorsed by the famous singer Snoop Lion (aka Snoop Dogg) in 2012, where the singer placed cigarillo advertisements in his music videos on YouTube. One video featuring the advertisement had over 51 million views as of 2014. The allure of flavoured products in combination with colourful and stylish packaging and celebrity endorsement are being used by industry to mask the harsh and toxic properties of tobacco and to promote youth initiation. This all sounds very familiar.

Other countries such as Brazil have adopted a ban of all tobacco product flavours and additives, including menthol, and the European Union and the USA are considering a similar ban. Lobby groups have been formed to address this issue with a key example being Freeze the Industry, which is based in Canada and is advocating for a ban on flavoured tobacco as a first step toward freezing the industry’s use of creative marketing strategies that appeal to youth.

Continued and sustained advocacy efforts on issues such as flavoured tobacco products is needed. One of the most troubling aspects of LCCs is the perceived lack of harm from using them compared to traditional cigarettes and the fact that young people generally view them as less harmful than traditional cigarettes. It is often said that the essence of advocacy is persuasion.

Understanding the evidence, the industry and those most affected by industry marketing tactics – learning from the past and projecting to the future – are all important strategies that advocates continue to refine and use.

PrevPreviousIn the crosshair of bombs and missiles: MSF report on healthcare in Syria
NextBoycott or battle? Medicine’s refugee dilemmaNext