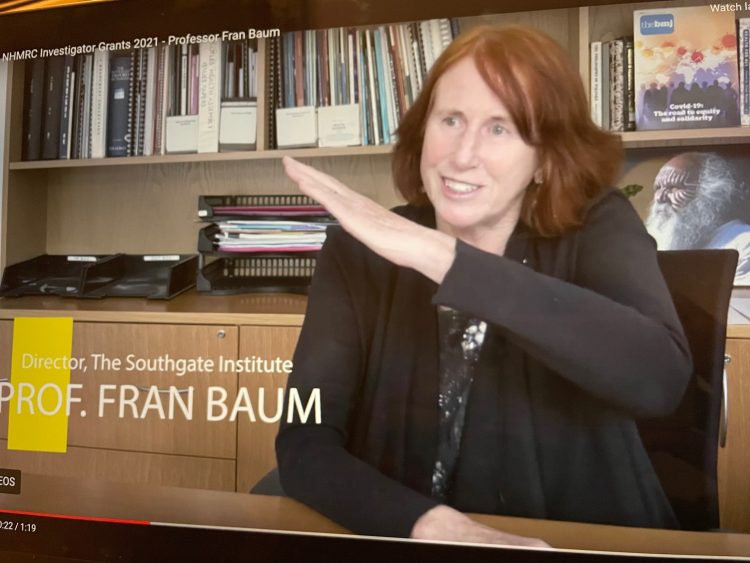 Health leaders are shocked and dismayed by a Flinders University proposal to close the Southgate Institute for Health, Society and Equity, and to “dis-establish” the positions of key staff, including the Institute’s director, Professor Fran Baum.

Global and national leaders in public health have written to Flinders University stating their concerns about the proposal, and stressing their support for Baum and colleagues, warning that the university faces reputational damage.

The plans were revealed to Southgate staff recently as part of a restructuring of the College of Medicine & Public Health (outlined here in a Flinders University statement to Croakey today), and a further announcement is expected tomorrow (26 October) following a consultation period.

In a letter to Flinders, Professor Ron Ronald Labonté, Distinguished Research Chair in Globalization and Health Equity at the University of Ottawa, said he had worked with Baum and colleagues for decades and had “long regarded Flinders as an ethical and socially responsible upstart representing the best of modern, humane, and engaged academic scholarship”.

“This no longer appears to be the case,” he said. “With regret, sadness, and profound shock, I hereby resign my affiliation with Flinders University.”

Another longstanding collaborator, Professor Jennie Popay, Distinguished Professor of Sociology & Public Health at Lancaster University, said she understood the university’s motivations for making changes, but “the decision to pursue these reasonable objectives by forcing one of the global stars of public health out of the university and abolishing the internationally renowned Southgate Institute is a grave mistake”.

Popay listed Baum’s achievements, including as a life member and former president of the Public Health Association of Australia (PHAA), recipient of prestigious Australian Research Council Federation Fellowships, an Officer of the Order of Australia, co-chair of the People’s Health Movement, and a member of the World Health Organization (WHO) Commission on the Social Determinants of Health that reported in 2008. Baum is currently a member of the Lancet Commission on gender and health, and a member of the WHO Scientific Advisory Committee for the 2023 World Health Report.

Popay wrote that Baum had made “an immeasurable contribution to public health globally, nationally and locally”.

“It is simply incomprehensible that Flinders would knowingly pursue its reasonable aspiration for your future public health ‘offer’ by jettisoning one of your highest profile public health academics.”

“There should be an apology from Flinders VC and a public recognition made of Fran and colleagues’ amazing contribution to the academy, policy and community wellbeing in Australia and globally.”

Friel said Baum and Southgate colleagues exemplify doing research that matters – research that aims to improve policy and practice across sectors such that the social gradient in health is reduced.

“As an outstanding activist academic Fran speaks truth to power – which clearly Flinders Uni does not like – but in doing so she and colleagues have helped ensure governments in Australia and globally are held to account. This is vital for democracy, social equity and health.”

Friel said the move was reflective of universities operating like corporations.

“If they carry on like this, we will see an academy that is extremely reductionist, profit driven and employing only those who share such values. Critical enquiry that embraces a systems perspective and speaks truth to power is vital for free and flourishing societies. Lose this at our peril.”

Liz Harris, Adjunct Associate Professor at Centre for Primary Healthcare and Equity UNSW, and another long-term collaborator of Southgate, told Croakey she was in shock when she heard the news, which indicated the precarious situation facing academics and the undermining of the independence of universities.

“My sense is if she’s vulnerable to dismissal, then we’re all vulnerable to dismissal. If you’ve got someone who’s bringing in millions of dollars in NHMRC and AHMRC grants, and who’s led Australia in qualitative research and the social determinants of health, and who can find themselves left afloat, then who is safe?”

Harris said the case was a reminder that “you can’t afford to speak truth to power without consequences”, and that “Flinders Uni should reflect on the long-term damage to their reputation”.

Harris urged Public Health Association of Australia members and people with an interest in public health to “stand up for one of their colleagues”.

“SACOSS and the broader social services sector have always been deeply appreciative of the work the Institute has led around the social determinants of health and the contribution it’s academic staff have made to the public health dialogue in South Australia, across Australia and across the world,” said the SACOSS letter.

Southgate Institute staff, in their response to the Flinders document, ‘Business case for change within public health academic staff structure, College of Medicine and Public Health’, said it contained errors and “dismisses and undervalues the contribution that Southgate makes to the College, including the grants won, its significant international profile and extensive work on the social, commercial and political determinants of health and equity”.

In a statement to Croakey, Baum said:

What is amazing is how many people are contacting me about this proposal from Flinders University and the two words that are said most often are that the proposal is ‘unbelievable’  and ‘bizarre’.

The decision doesn’t just affect the four staff who are “disestablished” but also the staff employed under their grants – most of whom are female early career researchers and have been thrown into uncertainty and despair”.

Given Flinders’ rejection of the Southgate Institute and its numerous research programs, the staff have no option but to look for another university home.”

In a statement to Croakey today, Flinders University said:

“Flinders University is proposing to expand and refocus its disciplines related to Public Health.

The College of Medicine and Public Health has been consulting with staff on a proposal to change the composition of the disciplines, including an overall increase in staffing through the appointment of early- and mid-career academics.

The proposal would see the current disciplines of Public Health and Social Determinants combined into a new discipline of Population Health.

Population Health is proposed to incorporate the functions of the Southgate Institute, so that the reach and impact of those research and education activities aren’t confined to a single institute but are more broadly integrated across the discipline.

Public health is a clear national priority and the proposal aims to strengthen the focus on areas of specific need including Indigenous health, as well as align with community, government and the MRFF’s research priorities.

The College is assessing staff feedback about the proposal and the result will be shared with them on 26 October.”

Declaration: Melissa Sweet has previously provided services to the NHMRC Centre for Research Excellence in the Social Determinants of Health Equity through Croakey Professional Services.