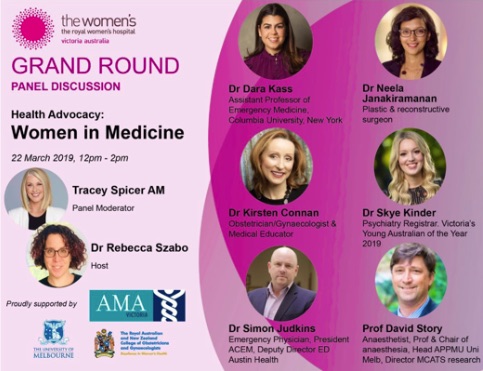 "the fight for gender equity is everyone’s responsibility..."

Follow #HealthAdvocacyWIM for news from women in medicine panel

The dramatic gap between women and men in leadership roles in health and medicine will be under the microscope at a panel event hosted by the Royal Women’s Hospital in Melbourne tomorrow (Friday, 22 March).

Journalist Marie McInerney will cover the event for the Croakey Conference News Service, and will live tweet for @CroakeyNews at #HealthAdvocacyWIM and broadcast interviews with panellists and participants via Periscope.

The event is fully booked with 200 people expected and will be livestreamed on Periscope via @ranzcog for those interested in following from outside the room.

What will it take to address gender inequity in health and medical disciplines in Australia, where men still dominate in leadership roles and research grants, despite growing numbers of women in the workforce?

How will those efforts propel a more inclusive and representative workforce and leadership in health and medicine overall?

These are key questions on the agenda at a grand round panel discussion on women in medicine at the Royal Women’s Hospital in Melbourne tomorrow.

The event will hear a call for quotas for women in leadership positions in specialist medical colleges from Hobart-based obstetrician/gynaecologist Dr Kirsten Connan (see more below) and will provide an international focus from United States emergency medicine specialist Dr Dara Kass.

Kass is a founding member of both FeminEM, for women working in emergency medicine (see image below), and TIME’S UP Healthcare, which emerged out of the broader Time’s Up movement and wants to put an end to sexual assault, harassment and inequality in the health sector. 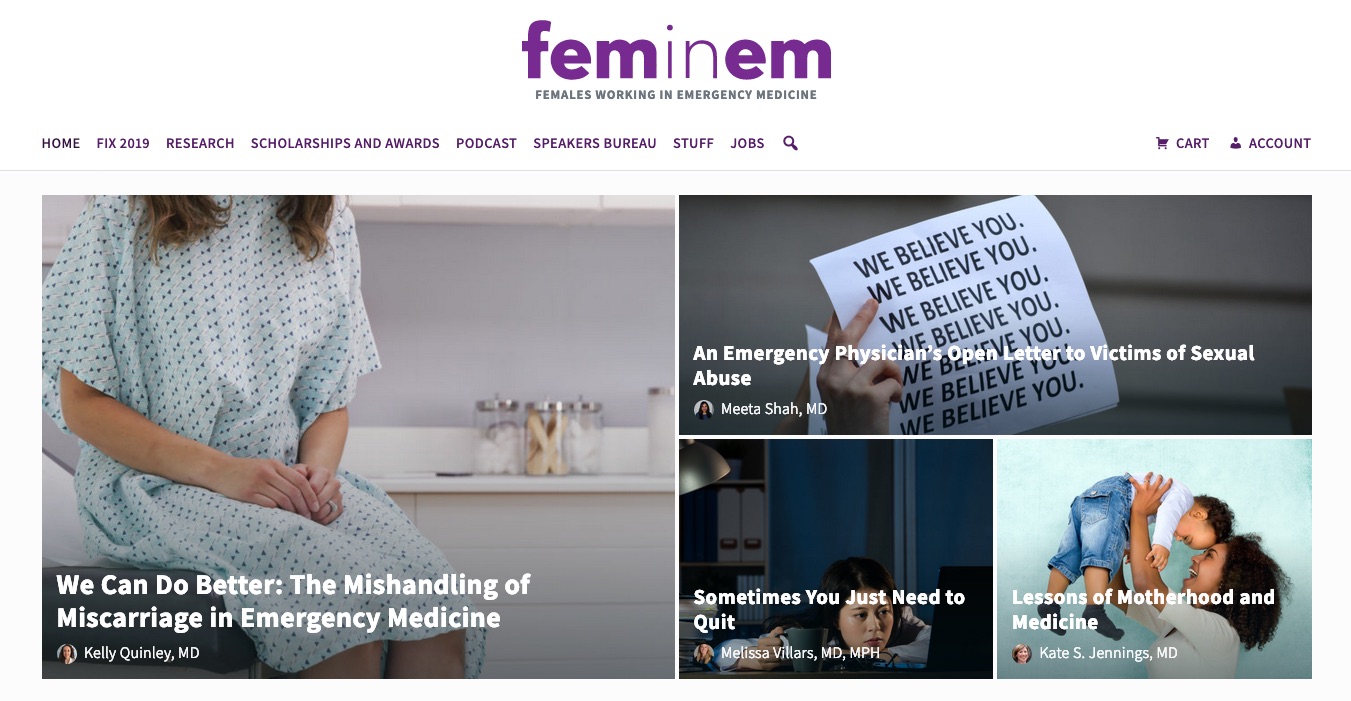 The Royal Women’s grand panel event follows publication last month by the prestigious journal, The Lancet, of a special edition on women in the health sector, which declared that gender equity is “not only a matter of justice and rights, it is crucial for producing the best research and providing the best care to patients”.

“If the fields of science, medicine and global health are to hope towards improving human lives, they must be representative of the societies they serve,” its editorial said.

Among wide-ranging articles on gender inequity, The Lancet looks at how gender bias disadvantages women from applying for grant funding, which seems to reinforce “the institutional culture that promotes sex-blind research”, according to an article by Sarah Hawkes, Fariha Haseen, and Hajer Aounallah-Skhiri.

The Lancet says that “all too often” programs to advance women’s careers locate the source of the problem and solution within women and their own behaviour, and not with broader features of systems that “disproportionately privilege men”.

Other articles in the edition discuss how the “historical gendering of medicine” prioritises particular types of knowledge, and ways of producing that knowledge.

The Lancet said the fight for gender equity is everyone’s responsibility, including men, who must “do more to amplify the importance of gender in global health, to listen, to engage, to advocate, and to create the conditions for women to flourish”.

That’s also a priority for the grand round’s host and coordinator Dr Rebecca Szabo, who said two men have been “very deliberately” included on the panel, “because we can’t have this conversation without them”.

“The panel is by no means representative of everyone who should be on it – gender or otherwise – but every person on it is a feminist,” she told Croakey ahead of the event.

“The whole point is that the men are at the leadership level so we can’t change this without them. We need the men who are aware of this as an issue to help us all bring about change.”

Asked about the timing of the event, Szabo said there has been significant momentum and interest over the past 18 months from the medical and broader community in women in leadership, via the #MeToo and #TimesUp movements and including concerns about low rates of women in politics, particularly in the Federal Coalition ranks.

“We want to open up the discussion about issues related to gender equity in medicine, including implicit bias, equity versus equality and how these issues impact on the profession and the community we serve,” she said.

That medicine and health also have a long way to go is clear, The Lancet says:

It is well established that women are under-represented in positions of power and leadership, undervalued, and experience discrimination and gender-based violence in scientific and health disciplines across the world.”

Intersectional approaches have provided insights into how other categories of difference such as ethnicity, class, geography, disability and sexuality interact with gender to compound inequalities.”

Those intersectional issues are also a priority for Australian health sectors and professionals to consider, says Szabo.

“While this round is about women in medicine, it’s the beginning of a broader conversation about diversity and inclusion,” she said.

“If we are going to provide comprehensive health care for the community then we need to have that mirrored in the people we are employing in health care,” she said.

Dr Kirsten Connan has been calling on the medical profession to show leadership on gender inequity through quotas and other affirmative action.

Last year she issued a call to action to her college, the Royal Australian and New Zealand College of Obstetricians and Gynaecologists (RANZCOG).

Connan said women now make up 50 percent of specialists and 83 percent of trainees of the specialty, yet RANZCOG has had just one female president since it formed in 1998 and currently has just one woman on the current seven-member board.

Women occupy little more than a third of institutional leadership positions within the discipline, including university and hospital heads of department, she said.

“Medicine, a profession with compassion and equality at its core, should be striving and leading on issues of inequality. Gender inequity is one of these,” she told Croakey.

This 2018 tweet from Queensland GP Dr Amelia Stephens also showcased concerns around equity in other colleges: 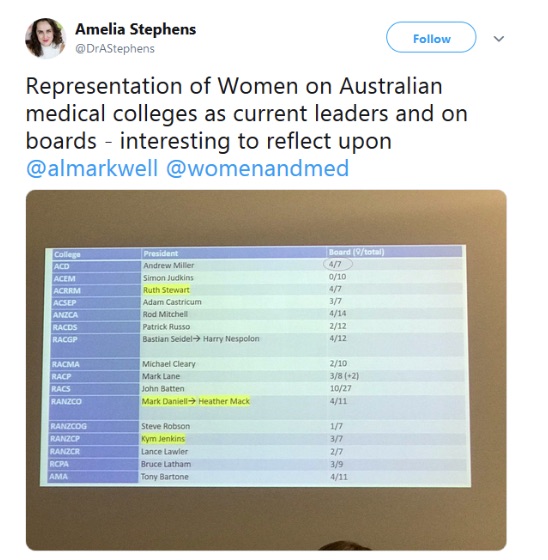 Ahead of the panel discussion, Connan said that removing gender barriers within medicine must include acknowledging and calling out craft group and institutional biases.

Gender quotas are one potential ‘transition tool’ that medical colleges could use when striving to achieve gender diversity at both a member and leadership level.

All colleges are challenged and encouraged to ensure their leadership reflects the diversity of their members.”

Breaking out of silos

Friday’s event follows a high-profile grand round panel hosted by the Royal Women’s late last year on the moral, ethical and professional duty of people working in health to speak out against the “institutional cruelty” being perpetrated on asylum seekers and refugees by the Australian Government.

That packed event brought together nearly 200 health professionals, including senior representatives of the Australian Medical Association (AMA) and medical and midwifery colleges, and sparked ongoing discussions on Twitter in the lead up to debate at Parliament on the medevac legislation, which was finally passed this year.

“Issues around gender inequity are being experienced across the health sector but we don’t always get to combine forces because we so often work in silos, either in our own hospitals or own specialties,” Szabo said.

“Just like the last grand round, I think we’re able to be much more powerful together. It gives us additional strength,” she said.

The Victorian branch of the Australian Medical Association (AMA), the University of Melbourne Department of Obstetrics and Gynaecology and RANZCOG are supporting the grand round event tomorrow.

The panel discussion will be moderated by broadcaster and author Tracey Spicer, who has spearheaded the #MeToo movement in Australia and last year created NOW Australia, a not-for-profit group aimed at helping anyone who has been sexually harassed in the workplace.