Following the fossil fuel money trail: from Gunnedah to Canberra 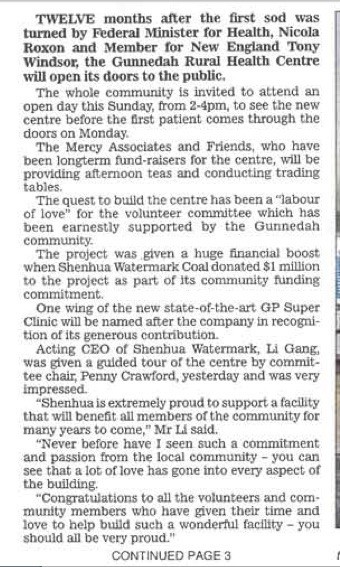 The story says the Centre received “a huge financial boost” thanks to a $1 million donation from Shenhua Watermark Coal. The donation is also acknowledged on the Centre’s website, together with other donors including BHP Billiton, the Australian Government, Santos and The Manildra Group.

While not wishing to undermine the community spirit and hard-work of local fund raisers in securing the clinic, it’s timely to reflect upon the ethical questions raised by health services and organisations accepting funds from companies like Shenhua. (It’s telling that the link to the story is on the Shenhua website in its ‘media coverage’ section).

It’s particularly timely given widespread concern about the Federal Government’s go-ahead for the Shenhua Watermark mine in the Gunnedah district, at the same time as it escalates its “war on wind power”.

If you’re up for a debate on these ethical questions or want to know more about the potential health impacts of the Shenhua mine, head over to @WePublicHealth this week, where the guest tweeter is Dr George Crisp, a Perth GP, WA chair and a National Committee member of Doctors for the Environment Australia. 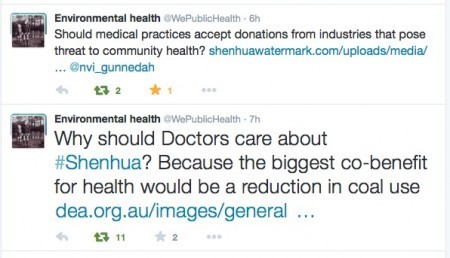 There are of course many ways that money buys influence, and Bernard Keane reports on some of these in a Crikey article today, “The Coalition’s war on renewables: follow the money” (paywall):

But while the Abbott Government’s approach to energy policy remains so fossilised, the rest of the world moves ahead.

The OECD is  joining the conga line that is “calling it quits” with the coal era, with an official recently writing:

“If there’s one thing that the biggest oil companies in the world and the smallest startup NGOs seem to agree on, it’s that coal is out. Although it’s not the only fossil fuel that we need to become independent from for a sustainable future, it’s finally looking like humanity is serious about cutting ties with that inconspicuous little black rock that’s causing immense damage to our planet.”

Meanwhile, on a similar theme, some analysts doubt the Shenhua mine will ever get underway (see comments towards the end of this article). 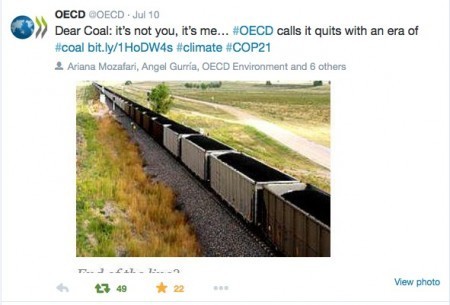