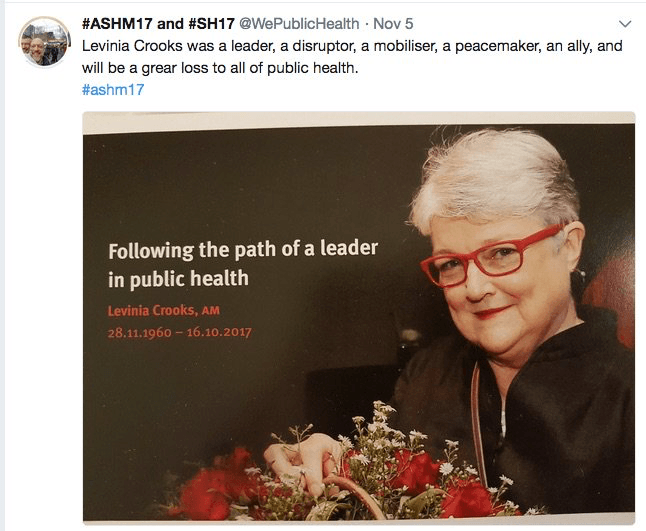 Following the path of a leader in public health: Levinia Crooks, AM

Levinia Crooks, AM, Chief Executive Officer of the Australasian Society for HIV, Viral Hepatitis and Sexual Health Medicine (ASHM) and adjunct associate professor at the University of New South Wales and Latrobe University, died on 16 October 2017 from progressive non-Hodgkin lymphoma.

Levinia was a close colleague and friend for over 15 years. I had the pleasure of working closely with her when I was President of ASHM from 2005 to 2007. We also worked together as members of the organising committees for the 4th International AIDS Society Conference on HIV Pathogenesis, Treatment and Prevention in Sydney, in 2007, and the 20th International AIDS Conference in Melbourne, in 2014. Both meetings were major international events that brought thousands of people from across the globe to Australia.

I saw Levinia’s capacity for hard work, her outstanding skill in bringing diverse groups together and her ability to form professional relationships with everyone and anyone. She did her work with passion and an unwavering commitment to science, evidence-based practise, robust and informed government policy and a deep understanding that engagement of community was at the centre of everything. She loved Australia and was immensely proud of its response to HIV, and wanted these strategies to be shared and adopted by our neighbouring countries.

Throughout Levinia’s tenure as CEO of ASHM, she worked with almost every clinician, researcher and community leader in the HIV, viral hepatitis and sexual health sectors. In the HIV sector, in particular, she has influenced, mentored and inspired an entire generation of professionals. She taught us all a way of making a difference in the work each of us do – to be strategic, be inclusive, do it in partnership, always use the best evidence to inform practice and never be complacent. Levinia was the consummate professional, but she always brought warmth, empathy and a sense of fun to her work.

Acknowledgements of Levinia’s death are littered with words of strength and respect. She befriended, encouraged, persuaded, inspired, challenged, was tireless and passionate, extraordinary, energetic and influential. For those who worked with her, her passing is intensely sad. For those who follow in her path, it is worth considering the incredible impact one person can have. At the Australasian HIV and AIDS Conference last week, we all took a moment to reflect on her achievements.

In the 1980s, at the very beginning of the AIDS epidemic in Australia, she became the manager for the Wollongong AIDS Research Project. She went on to become the first executive officer of the National Association of People with HIV Australia (NAPWHA).

Her work throughout the 1990s included running counselling workshops for the Northern Territory AIDS Council, formulating an evaluation strategy for services to people living with HIV and AIDS with the Commonwealth government, and developing a national media campaign promoting health monitoring and early diagnosis for people living with HIV for the Australian Federation of AIDS Organisations. She managed the HIV Prescribers’ Continuing Medical Education Project for the South Eastern Sydney Area Health Service in the late 1990s.

From late 1999, she was the CEO of ASHM, a position she held until ill-health forced her to retire in September 2017.

Under her leadership, ASHM extended its mandate from HIV to viral hepatitis and sexual health. She brought with this change the values and principles that shaped the HIV response from the beginning – outstanding advocacy, meaningful partnerships, a priority on community-based and patient-centred care and engagement at all times with people living with HIV, viral hepatitis or sexually transmissible infections (STIs).

Among her many contributions during her tenure at ASHM, she advocated, contributed to and shaped the national strategies for HIV, viral hepatitis and STIs. She coordinated the Pharmaceutical Benefits Advisory Committee application to remove the limitations on prescribing antiretrovirals based on CD4 T-cell count, making Australia one of the first countries to approve the initiation of antiretroviral treatment for all people living with HIV. She advocated tirelessly for appropriate pricing of direct-acting antivirals for hepatitis C and led the development and implementation of national guidelines for the use of pre-exposure prophylaxis for the prevention of HIV infection.

Within the Asia–Pacific region, ASHM became widely known for its outstanding education programs, successful advocacy with government and its commitment to developing multidisciplinary leadership across the sector. Many similar organisations across the region model themselves on ASHM and representatives often sought Levinia’s advice and mentorship. Her commitment to bringing services to those living with HIV, viral hepatitis or STIs was as well known in Port Moresby as it was in Sydney and Melbourne.

Levinia’s contributions were publicly recognised in 2008 when she was appointed Member of the Order of Australia for her services to HIV, and she was granted the President’s Award from the AIDS Council of New South Wales in 2015 for her leadership in the HIV sector.

*Professor Sharon Lewin is the director of the Peter Doherty Institute for Infection and Immunity. The author acknowledges helpful comments from Brent Allen, Andrea Fischer, Edwina Wright and Miranda Smith.

This article was originally published at MJA Insight on 6 November 2017, with the title, Levinia Crooks: leadership in blood-borne viruses and sexual health.

Further tributes, and details of planned memorial events, can be found here and here.

PrevPreviousPresenting a vision for a better, more equitable Australia
NextLaying down a challenge to nursing: are you ready for the future?Next