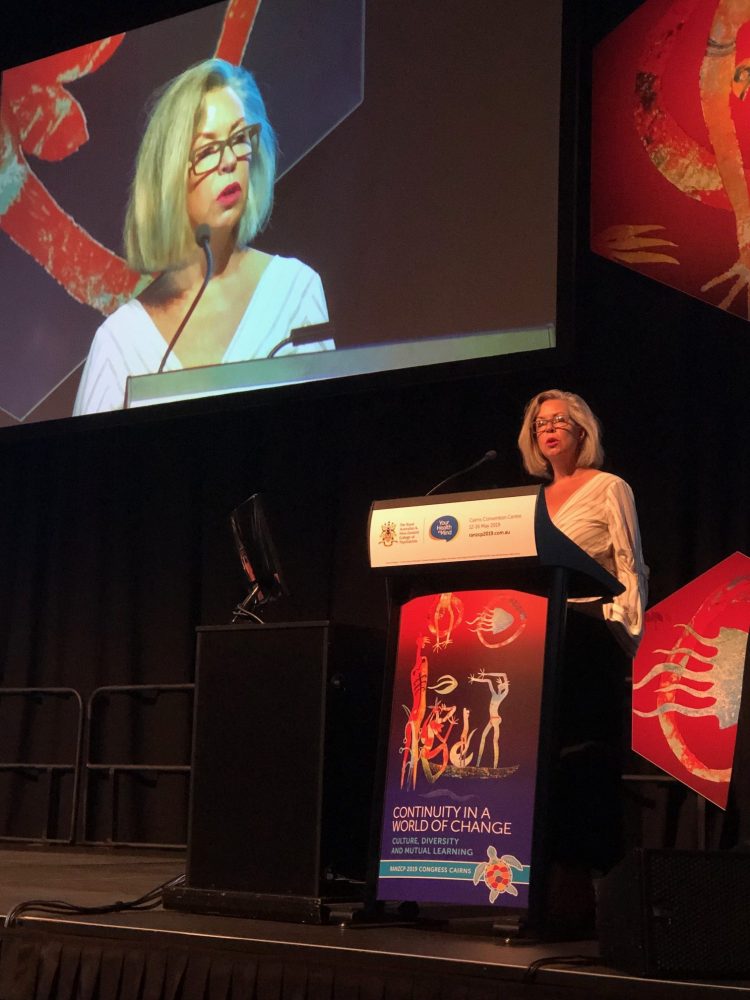 Food, mood and a call to action on #AusVotesHealth

When it comes to mental health, you are what you eat, and the government must intervene to promote healthier diets through taxation and legislative reform.

These were the messages from a fascinating keynote on food and mood at this week’s Royal Australian and New Zealand College of Psychiatrists’ 2019 Congress #RANZCP2019 in Cairns on the eve of an #AusVotesHealth federal election where prevention and public health have received welcome attention.

Professor Felice Jacka from Deakin University presented the latest findings on the links between the food we eat and the way we feel, urging governments to improve the health of our regulatory landscape as obesity takes a growing toll.

Croakey journalist Marie McInerney was there for the Croakey Conference News Service and reports below.

Australia needs to clamp down on the food industry — not only to help stem the obesity crisis but amid growing evidence that healthy diet is both preventative of and treatment for mental illness, a psychiatric conference was told this week.

Jacka said she was encouraged by Labor’s promises on prevention ahead of this Saturday’s federal election, including moves on food labelling and advertising to children, but said much more needs to be done by policy makers and health practitioners to address the way the global food industry has profoundly changed the way we eat.

More training is also needed for psychiatrists, mental health professionals and GPs so they have the information and confidence to be able to put nutrition and diet alongside medication in their mental health treatment plans, she said.

“No economy in the world can afford the cost of the health burden arising from the way we’re eating and what we’re not eating,” Jacka said in her keynote address to this week’s Royal Australian and New Zealand College of Psychiatrists (RANZCP) Congress in Cairns.

Jacka, a psychiatric epidemiologist, is at the forefront of the emerging new field of nutritional psychiatry, which focuses on the benefits of diet and nutrition for the prevention and treatment of mental ill-health.

She has just published a book – Brain Changer – that, like the research studies she is leading at Deakin, seeks to answer the question:

It maps the centre’s findings to date:

At the RANZCP congress, Jacka outlined the “dire” health impact of a massive shift to processed foods over the past century, where an unhealthy diet is now the leading cause of early death in men and number two in women.

At the same time, mental and substance abuse disorders — including depression, anxiety and other psychiatric conditions — lead the world in terms of disability burden.

Jacka was a co-author of a 2015 article in Lancet Psychiatry from members of the International Society for Nutritional Psychiatry Research — which she founded and heads — that said psychiatry is at an important juncture, with “the current pharmacologically-focused model having achieved modest benefits in addressing the burden of poor mental health worldwide”.

Although the determinants of mental health are complex, the emerging and compelling evidence for nutrition as a crucial factor in the high prevalence and incidence of mental disorders suggests that diet is as important to psychiatry as it is to cardiology, endocrinology, and gastroenterology.

We advocate recognition of diet and nutrition as central determinants of both physical and mental health.” 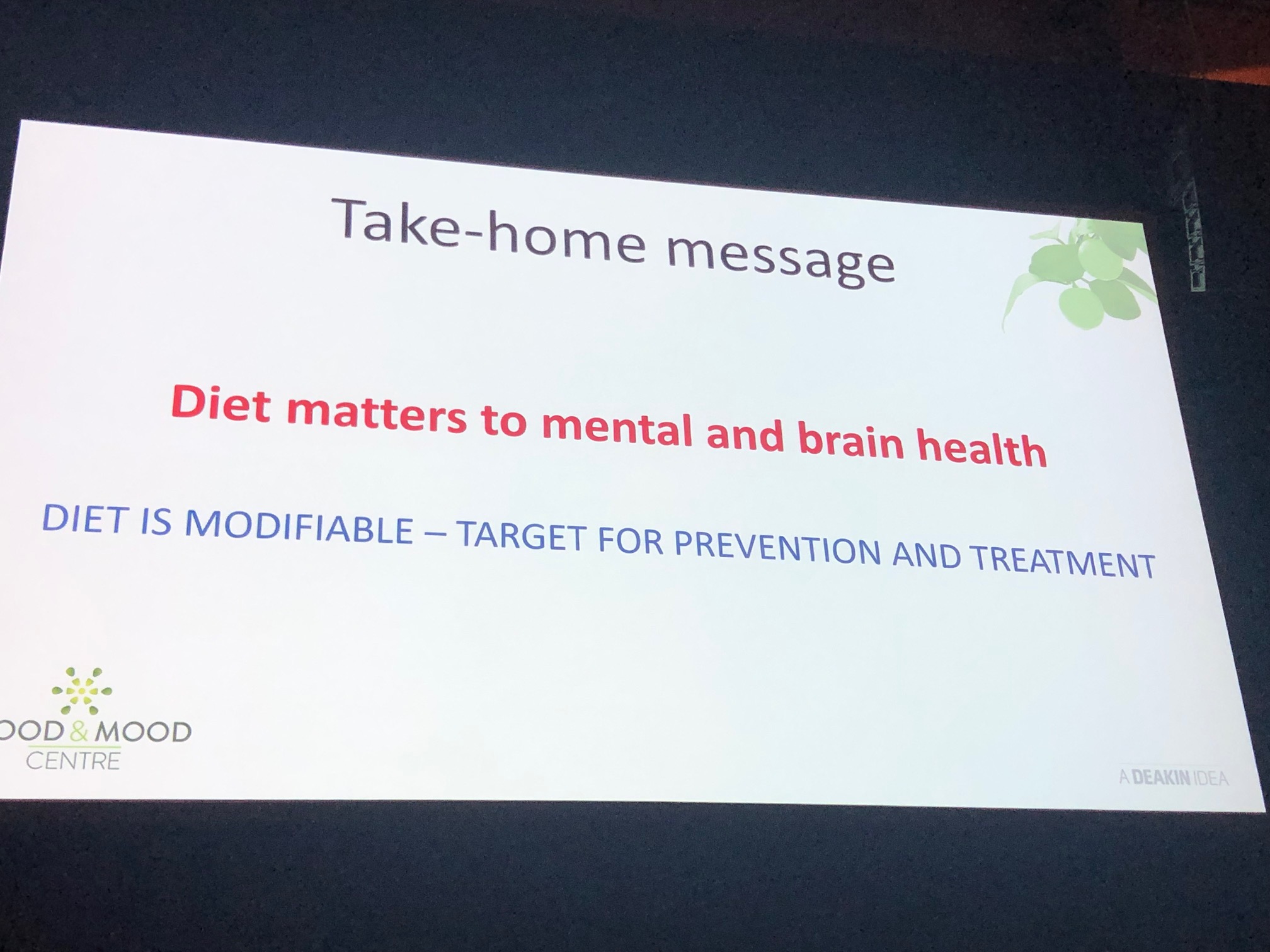 Jacka admits she was met with much skepticism when she first proposed a PhD around the issue of diet and mental health. It was justified, she says.

“There had been a lot of really poor quality ‘evidence’ out there regarding nutrition and mental health, for example the field of orthomolecular medicine which is anything but evidence-based. It had tarnished the reputation so people were very skeptical,” she said.

Despite compelling evidence of diet’s impact on health, most medical practitioners still only get about two hours on nutrition in their training, Jacka explained, with separation of mind and body still the prevailing biomedical paradigm. 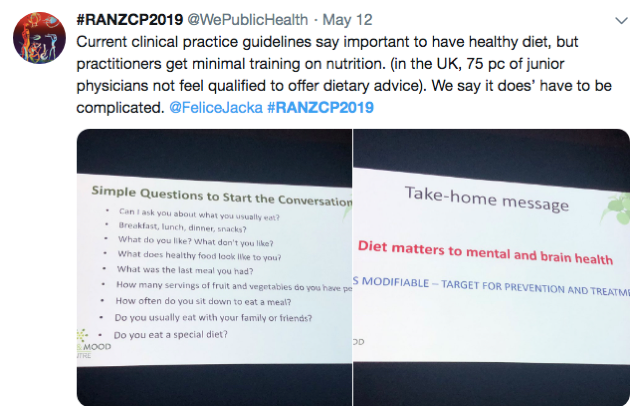 In terms of the general public, she added, there was a sense of “don’t we already know about this?”, when in fact the opposite was true.

“We have known for a very long time that nutrition is important for physical health outcomes but the link with mental health had not been explored scientifically, and certainly not with scientific rigour,” Jacka said.

Jacka’s PhD shifted the debate, examining the extent to which high-prevalence mental disorders were related to habitual diet in more than 1,000 women

After adjustments for age, socioeconomic status, education, and health behaviours, it found that a “traditional” dietary pattern characterized by vegetables, fruit, meat, fish, and whole grains was associated with lower odds for major depression or dysthymia and for anxiety disorders, versus a “Western” diet of processed or fried foods, refined grains and sugar.

The work made the cover of the American Journal of Psychiatry and more studies since have identified similar trends, generating a “very large database of consistent observational evidence across countries, cultures and age groups linking the quality of people’s diets to their risk for depression in particular,” Jacka said.

While the evidence was clear, a big question mark remained over causality when, in 2017, Jacka and her team “went where others fear to tread”. 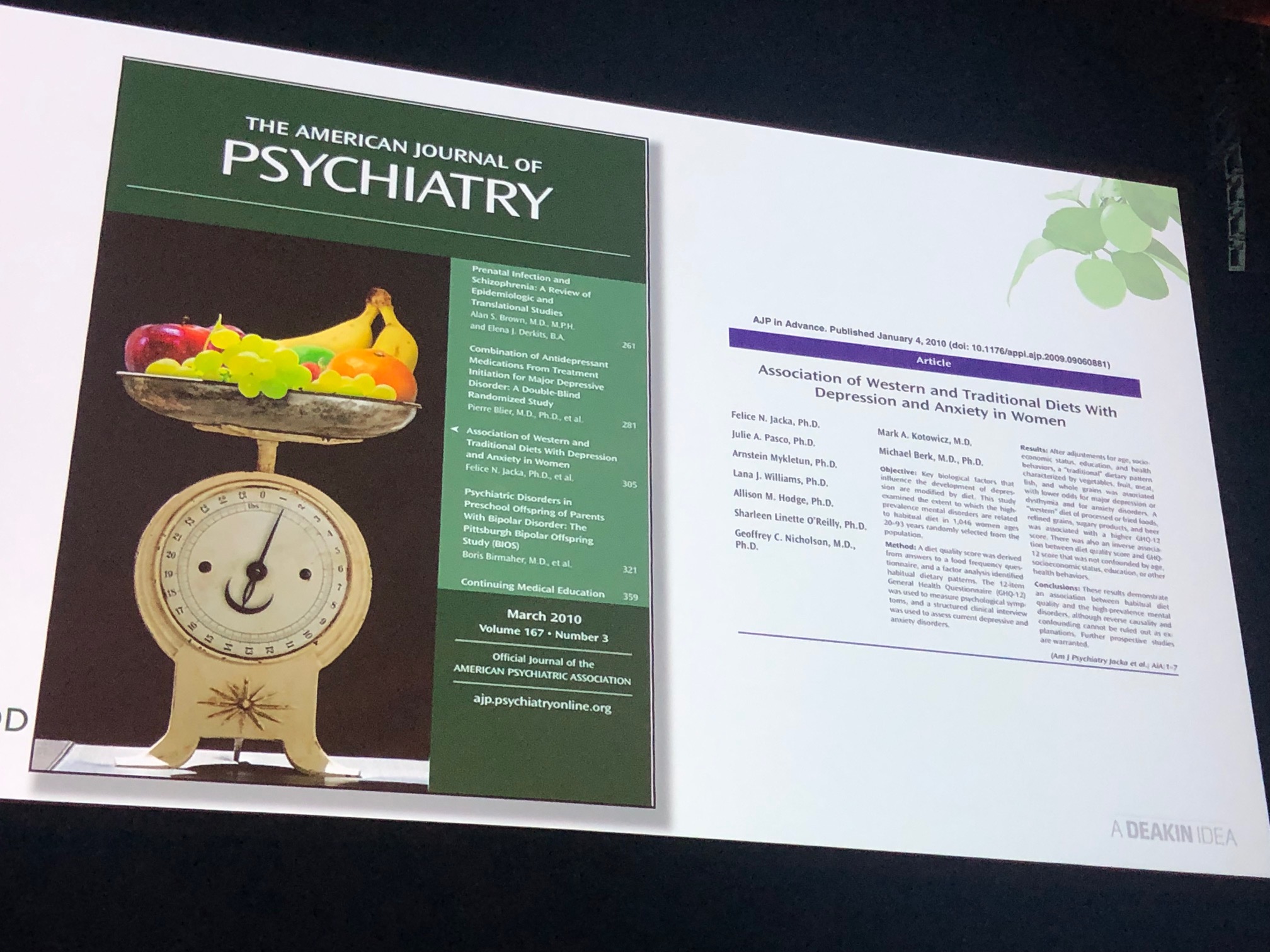 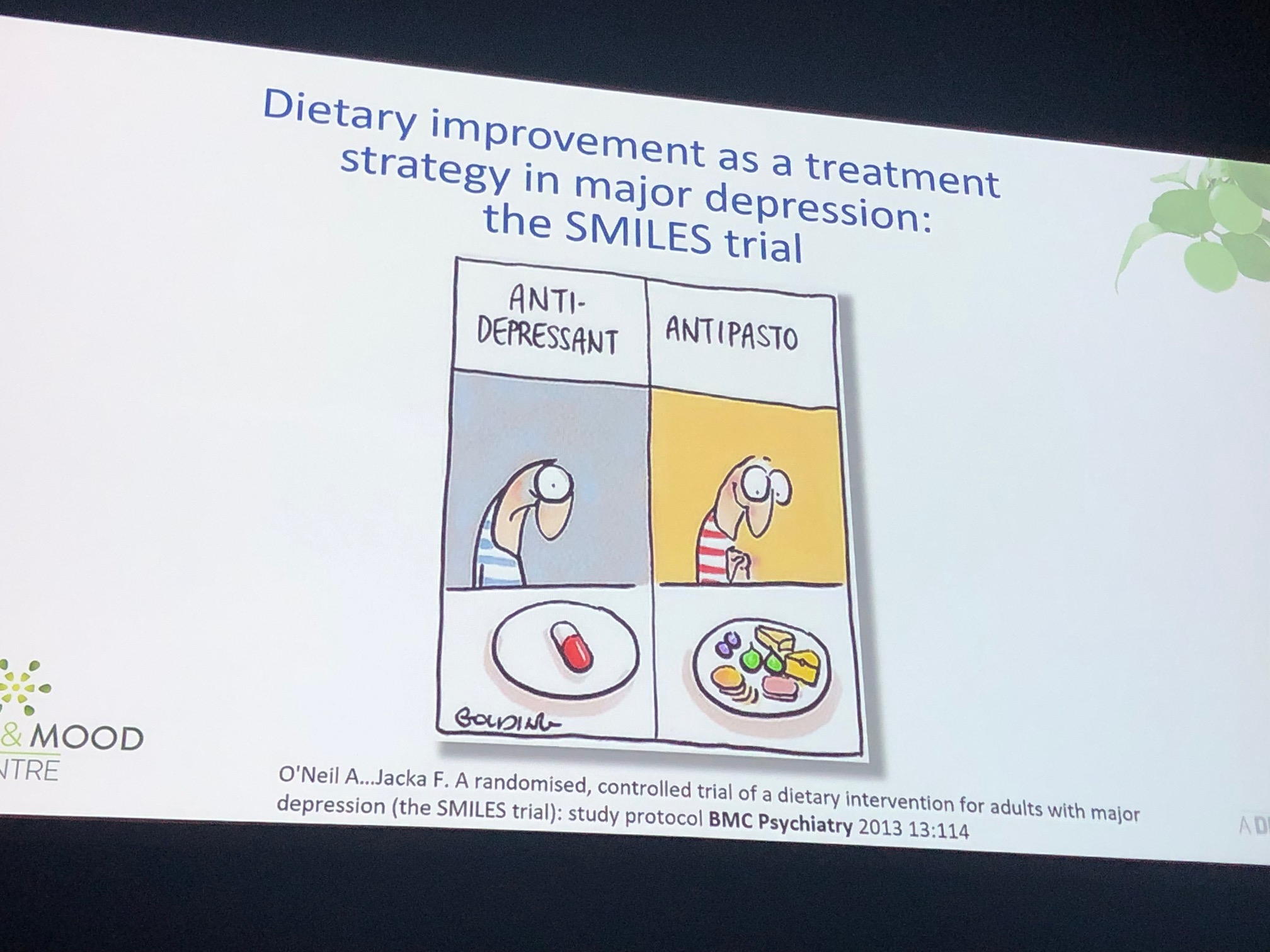 The SMILES (Supporting the Modification of Lifestyle in Lowered Emotional States) study was a 12-week, parallel-group, single-blind, randomised controlled trial of a dietary intervention in the treatment of moderate to severe depression – one of the first ever RCTs to delve into this question.

The intervention consisted of seven individual nutritional consulting sessions delivered by a clinical dietician and “for a small, very underfunded study, has had a remarkable impact”, said Jacka, with headlines in the New York Times, Guardian, and Wall Street Journal.

The results, published in BMC Medicine, showed that participants in the dietary intervention group had a much greater reduction in their depressive symptoms over the three-month study period, compared to those who only received social support. 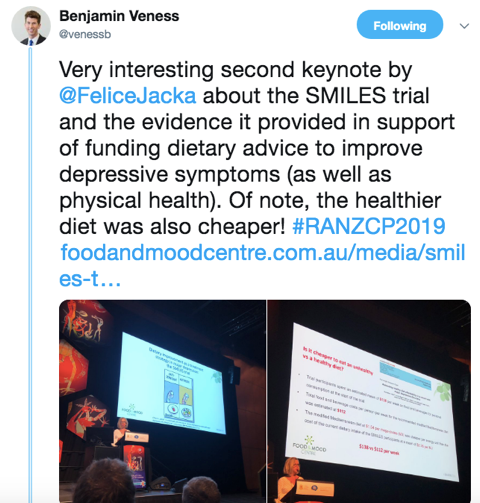 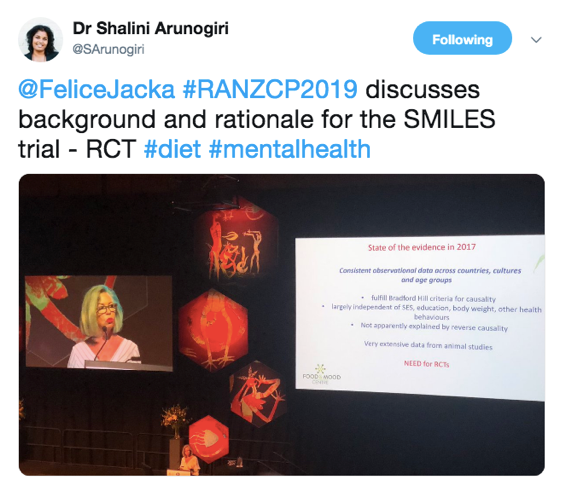 Though some have urged caution in extrapolating the findings of SMILES and other similar studies, Jacka says there is great potential in being able to provide a relatively simple intervention in a complex area of health.

“Think about the risk factors of mental disorders: early life trauma, poverty, disadvantage, life stresses, family history. All of these things are difficult to intervene on and modify,” she said.

“As well as looking to address those factors we need to look at the things we can modify, in order that we might think about prevention.”

Importantly, says Jacka, there’s no great cost to the intervention at a personal level.

A detailed cost analysis showed an actual saving per participant of around $3,000, from not buying processed or takeaway foods, as well as fewer visits to doctors and less time lost from work. 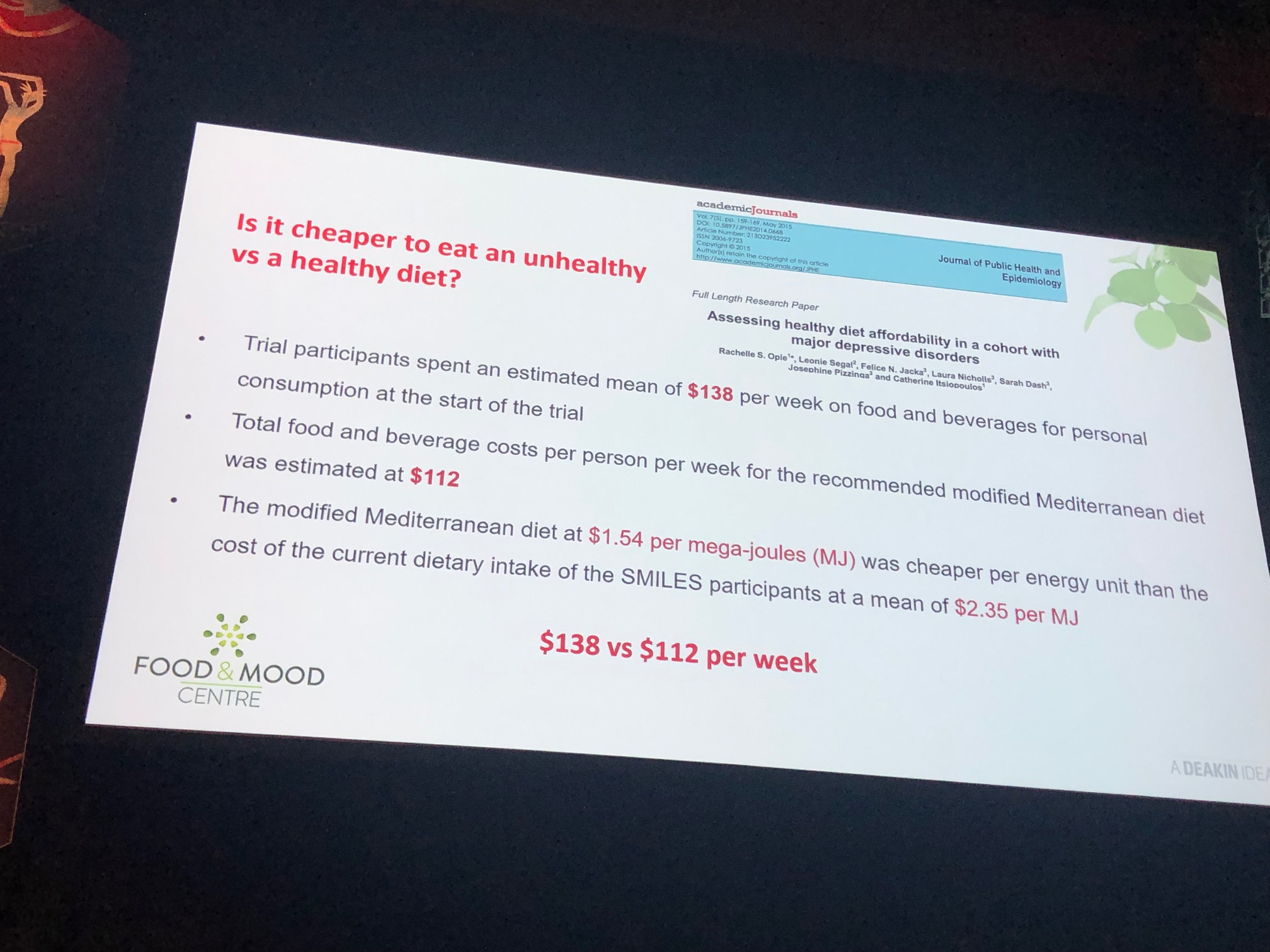 Jacka’s next focus will be to investigate whether the intervention is effective beyond depression in mental health disorders like schizophrenia. One Sydney study has already shown benefits in terms of psychosis symptoms from physical activity.

“We think the dietary interventions will have the same benefits, they just haven’t been measured yet, so this is where we’re going now,” Jacka said.

Her team also has an emerging focus on the microbiome, a research field garnering much media and academic attention in recent times. Read more about the team’s work here. 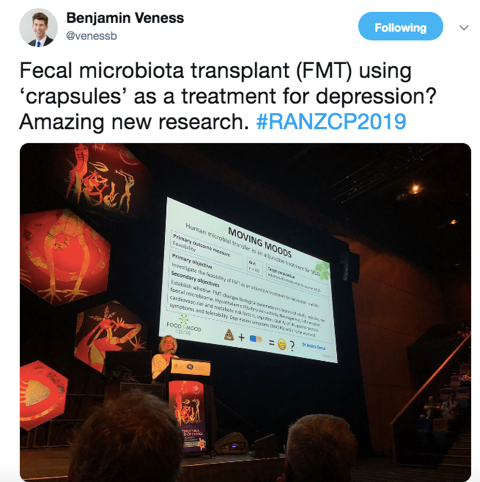 Jacka’s work aligns with the Equally Well movement, which is campaigning on shocking physical health disparities for people living with mental ill-health, with a significant morbidity and mortality gap — dying up to 20 years earlier than average — and less and lower-quality health care received compared to the broader population.

Mental health consumers spoke out about this issue at a recent Equally Well symposium covered by the Croakey Conference News Service, expressing concern that physical health represented yet another dimension of their wellbeing for which they could be blamed under the stigma of “personal responsibility”.

While this was an important consideration, Jacka said those involved in her studies had welcomed simple, effective lifestyle interventions “because it gives them their power back, (they say), ‘I can make those changes for myself’.” 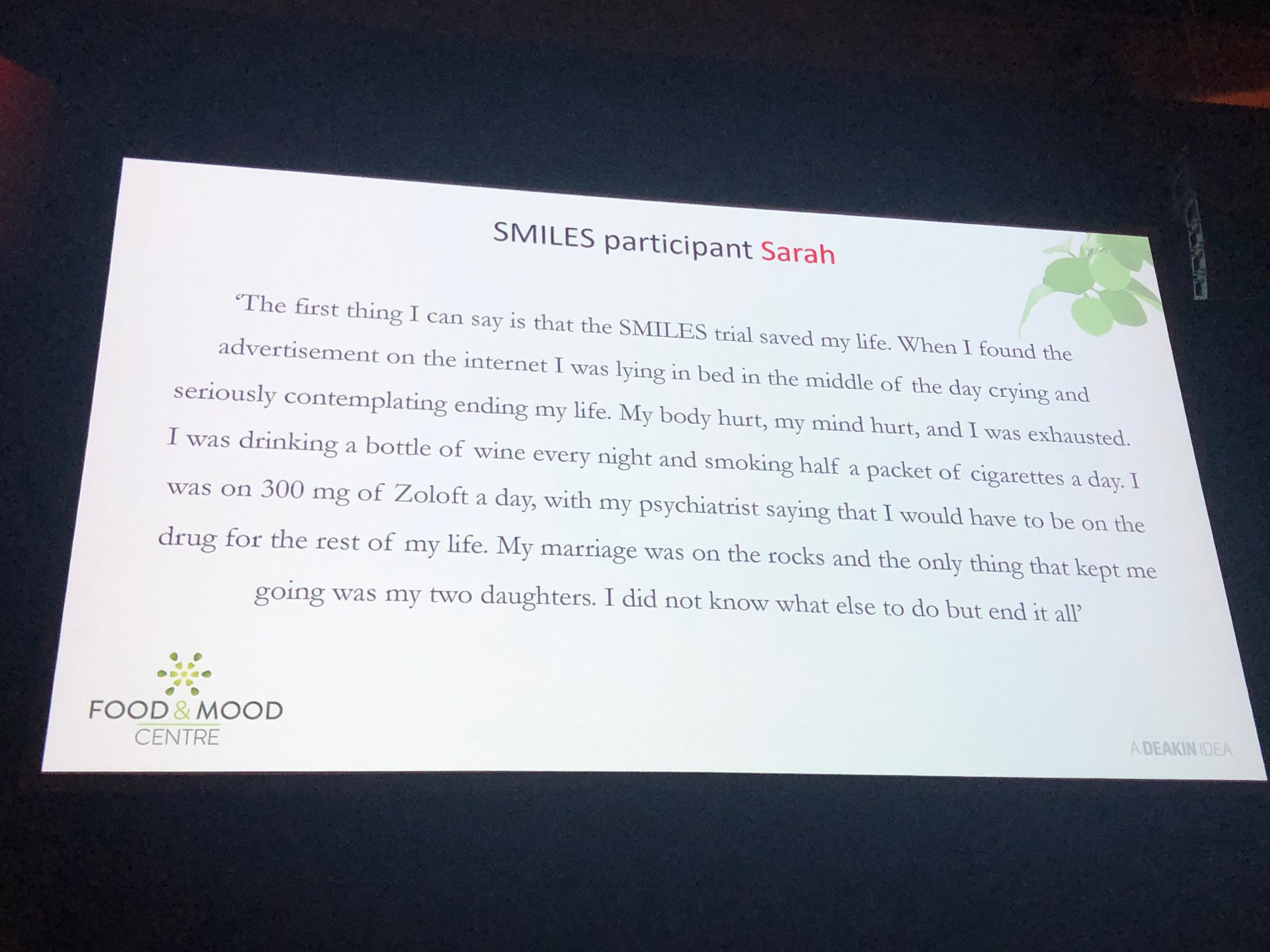 Laying down the gauntlet ahead of this weekend’s federal election, Jacka said the greatest onus ought to be on governments to reform the “food environment” through legislation and taxation:

These ultra processed food products that now make up approximately 60 percent of the average energy intake of Americans and 35-40 percent of  Australians (should) no longer (be) the cheapest, most heavily marketed, most ubiquitous and most socially acceptable (food products).”

Jacka says it is “very encouraging” to see Labor pledging to enact recommendations from the Tipping the Scales strategy on obesity.

Labor has promised to implement a range of preventative health strategies, and to consider others like mandatory Health Star ratings and junk food advertising aimed at children, though it has yet to be convinced about a sugar tax.

Adding to the wish-list, Jacka called for dieticians to be included on the Medicare Benefits Schedule, and for nutrition to have a more prominent place in treatment, given RANZCP clinical guidelines already confirm the importance of sleep, exercise and diet in mental health management.

Instead of wholesale changes, Jacka said practitioners should just start with key questions – “what do you like to eat? what do you have for breakfast/lunch/dinner” — and walk patients through some basic substitutions, swapping sweet cereal for porridge or the “white bread parmie” for wholegrain and salad. 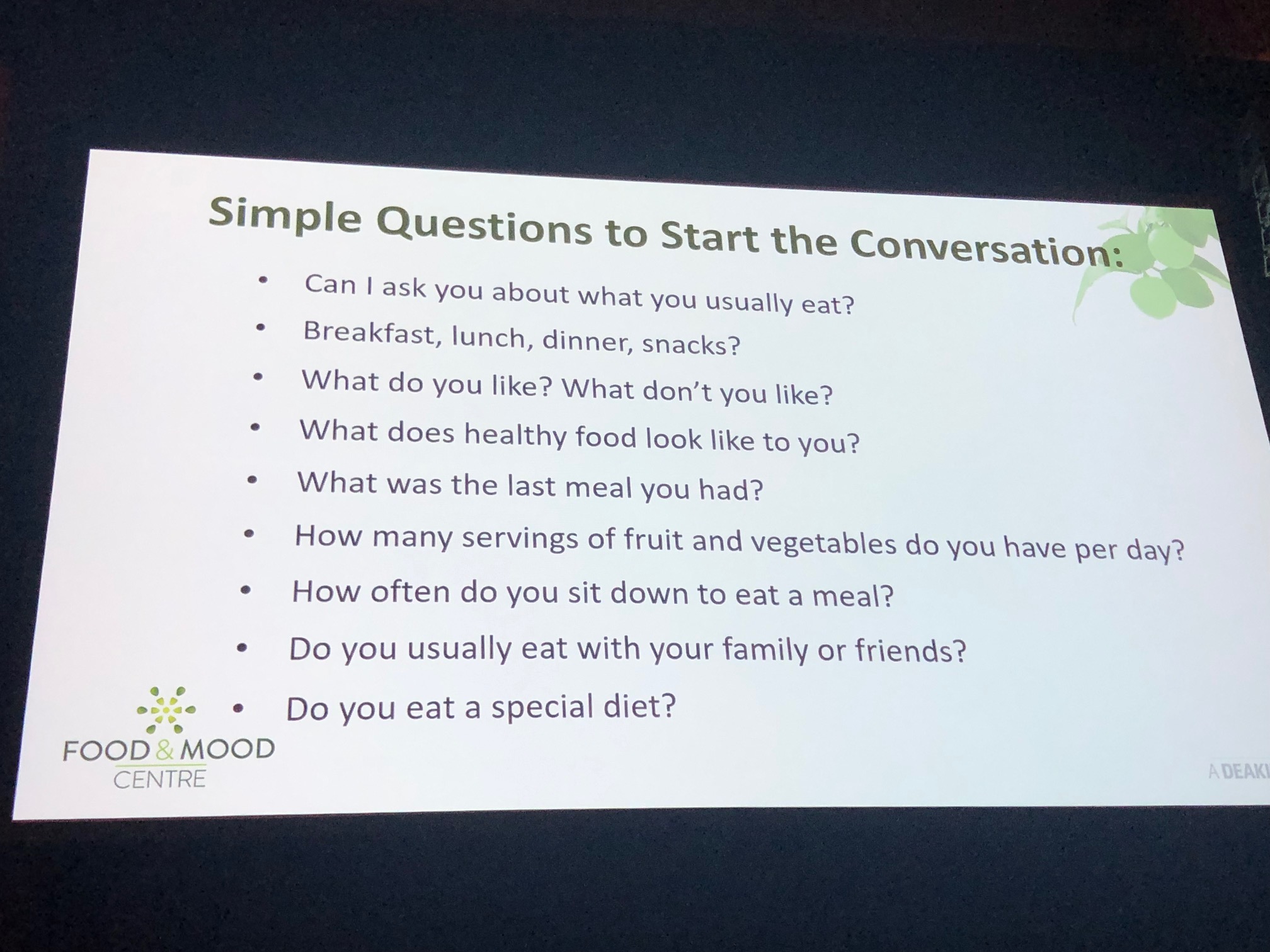 Hear more from our interview with Professor Felice Jacka below:

#RANZCP2019 continues in Cairns today. Our reporter @mariemcinerney is there tweeting from @wepublichealth. Bookmark this link to follow our rolling coverage of the event.

PrevPreviousSome questions to transform how we “do” health. Reporting from #AusVotesHealth Twitter Festival
NextThe #AusVotesHealth manifesto – and it comes with a new e-book packed with healthy readingNext