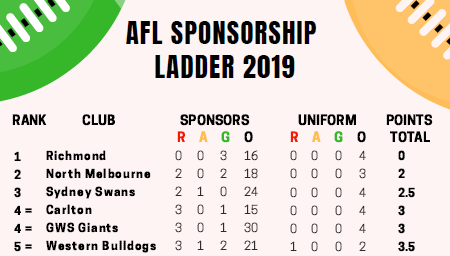 Footy finals fever: when unhealthy sponsors, advertisers can be the big winners

Introduction by Croakey: The overwhelming majority of AFL clubs were sponsored by at least one company that promoted junk food, alcohol or gambling products during the 2019 AFL season, a review by the Curtin University-based Public Health Advocacy Institute of WA (PHAIWA) has found.

The AFL sponsorship ladder has been published by the PHAIWA ahead of tomorrow’s AFL grandfinal, and again highlights a growing issue with alcohol advertising and unhealthy sponsorship promotion in Australian sport.

In determining the ladder, sponsors were classed on a traffic light system as ‘red’ or ‘amber’ depending on how much fat, sugar, salt and fibre was included in the product. Red sponsors also included companies who promoted alcohol and gambling. The PHAIWA found:

Julia Stafford, Research Fellow with the Alcohol Programs Team at PHAIWA, said it’s a big concern that alcohol, gambling and junk food companies are promoting their products during sports they know children and teenagers are watching. See more via Twitter at the bottom of this post.

Inappropriate sponsorship is a concern shared by Hello Sunday Morning, a Sydney based organisation started in 2009 when its now CEO, Chris Raine, then a nightclub promoter, undertook a year-long experiment to quit drinking.

Here’s one of its most recent blog posts, written by a staff member, on Sports Sponsorships & Alcohol: What is the Relationship?, republished here with permission.

New South Wales hockey side NSW Pride is set to announce that it is granting Hello Sunday Morning full sponsorship rights for the coming hockey season. That means we’ll become very visible to club hockey fans and players, and to casual viewers of the matches on digital TV well into next year. We’re proud to align ourselves with the Hockey NSW brand, given our shared values and goals.

We’re aware that some organisations might want to align themselves with our name as a bit of virtue-signalling whilst simultaneously taking money from alcohol manufacturers, like casinos donating to gambling counselling services.

As it turns out, NSW Pride, and its parent organisation Hockey NSW, do not accept sponsorships from alcohol groups, so we aren’t being used as a fig-leaf. They promote strong community connections and healthy life-choices, very similar to our own stance.We know that drinking behaviours and attitudes are strongly influenced by the social situation in which alcohol is consumed. There’s good evidence that young people who watch televised sport are exposed to extensive alcohol advertising, and that those young people who are sports fans drink more alcohol and experience more alcohol-related problems.

Consumption of alcohol is typically associated with sport as an important component of post-game celebrations and being part of the team. Men in particular are more likely to drink excessively when socialising with members of their sporting team than with other groups of friends.

Hello Sunday Morning does not take a hardline view on alcohol consumption – we don’t advocate abstinence for all. Instead, we believe that people should consciously develop the relationship with alcohol that works best for them. In many cases that can mean abstinence, but it can also mean reduction and moderation to a lower level, or maintenance at a set level.

The important thing is that the relationship is mindful, we drink the amount that we believe is beneficial to us at a frequency that suits us. Our drinking should not be dictated by unthinking habit, nor pushed on us by societal pressures.

But back to sports … the Hockey NSW connection got us thinking about the infiltration of the drinking culture into professional sports in Australia. This and next weekend we’ll have two nation-stopping events: the Australian Rules and Rugby League Grand Finals.

The TV advertising opportunities at these events are colossal, and only companies with the deepest pockets can hope for a piece of the advertising action. For alcohol manufacturers there are very few more attractive audiences than the blokey Grand Finals followers, many of whom will be watching the match with a beer in hand and several more waiting in the fridge. It’s a major family viewing event, too, so a large proportion of the audience will be children, watching with their parents.

FARE (the Foundation for Alcohol Research and Education) have published an analysis of the alcohol advertising run during the TV coverage of the 2018 season Grand Finals, and what they found was startling.

By contrast, the analysis found there were only 11 appearances during the NRL Grand Final of a New South Wales Government advertisement warning of the dangers of drink driving.

FARE’s report concluded that ‘professional sport is currently being used as a highly effective conduit for mass-population alcohol marketing during children’s viewing hours.’

As mentioned earlier, Hello Sunday Morning avoids taking a purist view on most things, including the abstinence-versus-moderation debate, but we can’t help thinking that there’s something wrong with this picture! 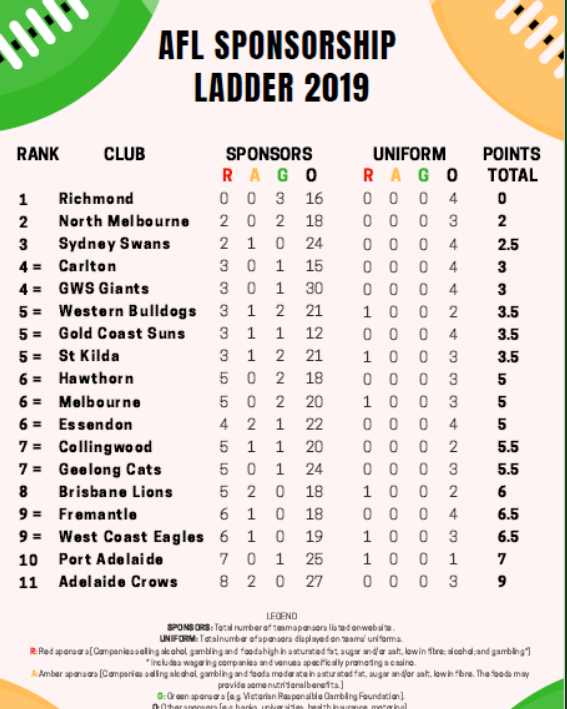 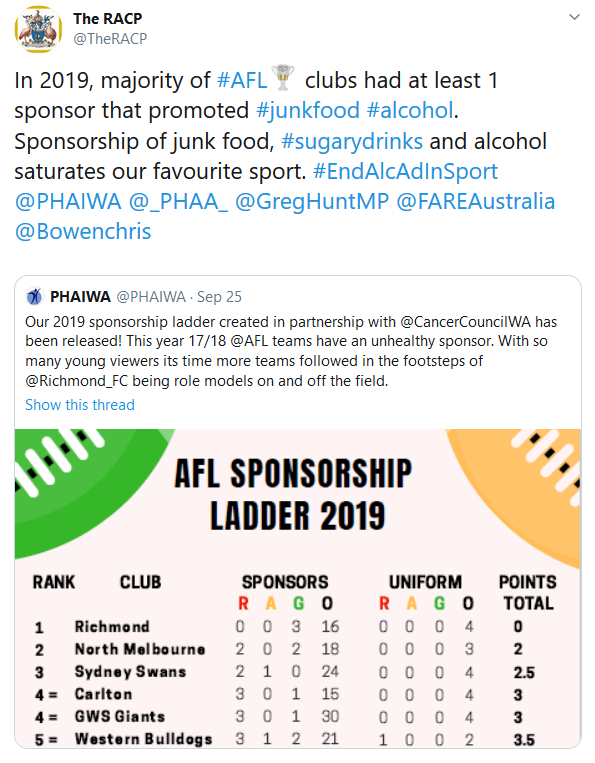 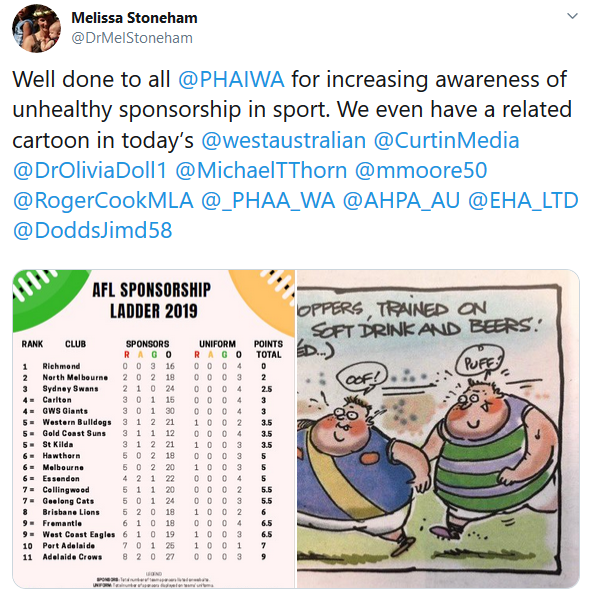 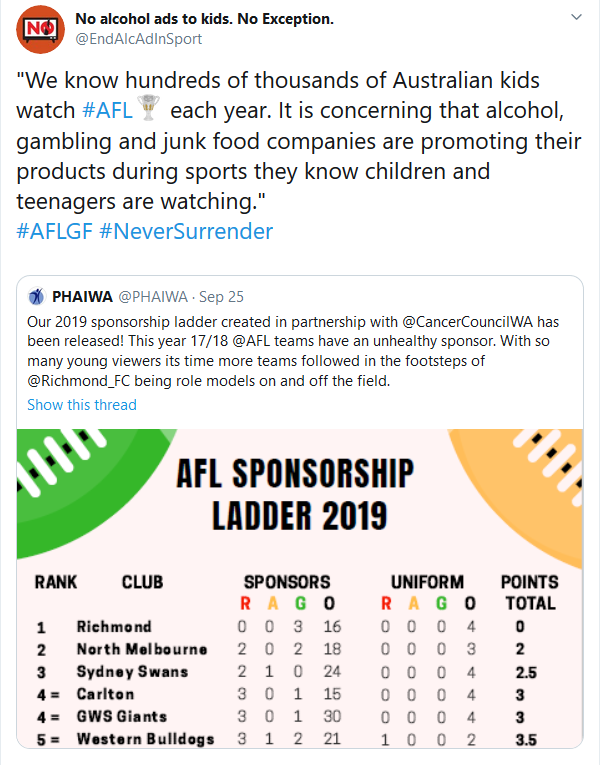