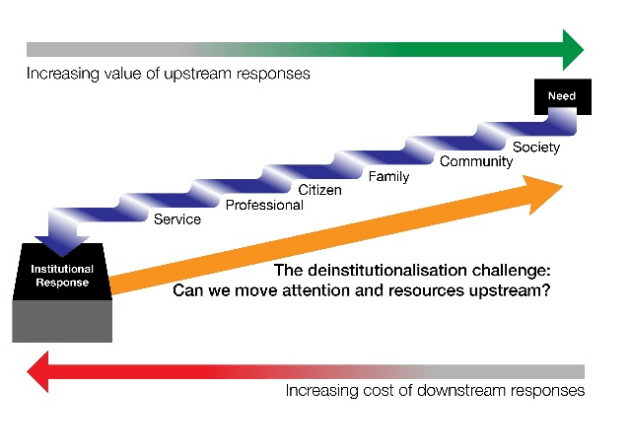 Mental health advocates should be campaigning for more equal, inclusive and stronger communities, according to a provocative and challenging keynote presentation to the Towards Recovery conference in Melbourne today (Thursday). 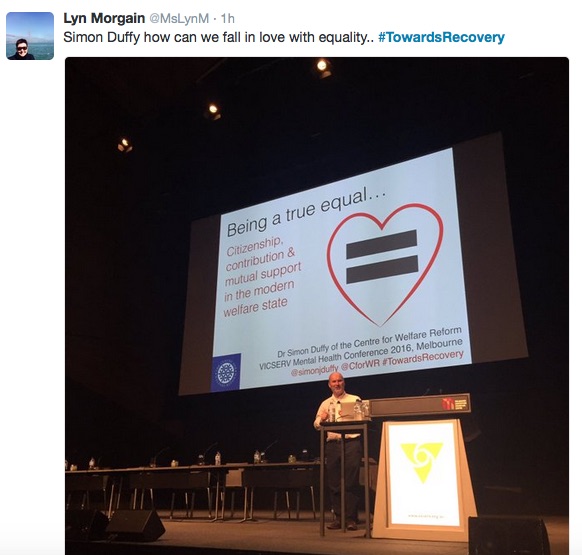 Dr Simon Duffy, founding director of The Centre for Welfare Reform in the UK, told the conference that while the welfare state is a good thing, it had been poorly designed, creating an “empire of services” that end up protecting their own interests and undermining the possibility of better solutions.

This had led in the UK to many in the charity sector providing poor representation of the people they were charged with supporting, with fear of losing funding having “killed the independence of leading charities”.

As a result, he said, we are failing to truly address complex issues contributing to poor mental health, and actually causing mental illness.

“If you believe in mental health you should be against high levels of income inequality; campaign around that,” he said.

“I do think a lot of organisations, if they’re not careful, their main purpose becomes surviving.” 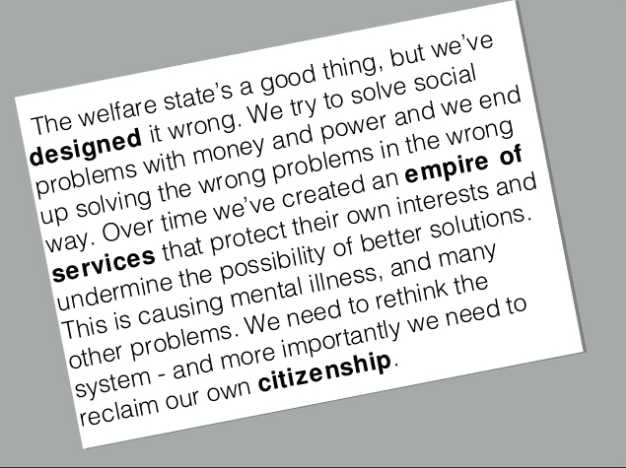 The #TowardsRecovery conference, is convened by VICSERV, the peak body for community managed mental health services in Victoria, and continues on Friday.

Other issues being discussed – to be covered in further stories at Croakey – include the challenges of the National Disability Insurance Scheme (NDIS), mental health reforms and the emerging role of Primary Health Networks.

Duffy cited what he said was much contested but enduring evidence of better outcomes for people with schizophrenia in developing nations, possibly because of greater community inclusion, involvement of traditional heating rituals, valued work roles and extended kinship. 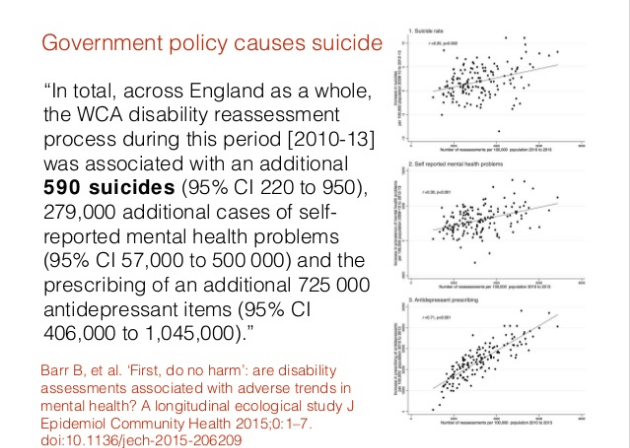 And he talked about the harsh impact and culpability of recent UK government policy – “Mrs Thatcher had nothing on these people,” he said.

The introduction of “work capability assessments” of people with disability and mental health issues had led over three years to multiple social issues, including increased rates of suicide.

“That’s government policy,” he said. “Those are the folk we ask to take care of society.”

He talked about the need to shift funding, resources and attention “upstream”, telling the “parable” of three friends out for a walk by a river, who found a baby had been thrown in, and then another, another, and more babies.

They start saving them, then one began to run off up the river. When the others asked why he wasn’t helping, he said: “I’m going up the river to find out who’s throwing all these babies in.” 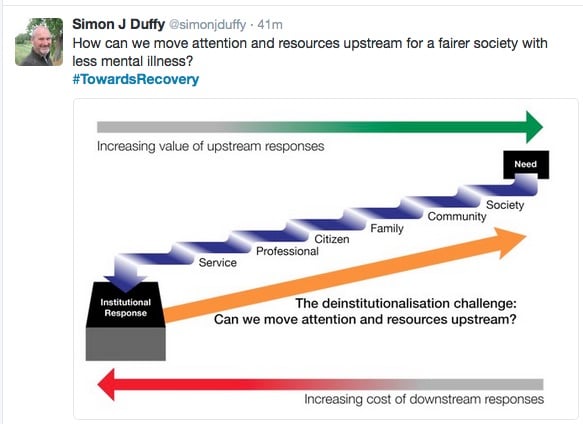 Duffy highlighted two groups he had studied that had emerged from local communities with innovative new approaches to tackle their own issues. One was the People Focused Group Doncaster: peers with mental health problems who came together on a project and got more out of working together than from the project proper.

The other was an example of an innovation alternative, the West Yorkshire-based WomenCentre that has delivered significant improvements in health, justice and safety issues for very vulnerable women and families who had, he said, effectively been deemed too complex by other services.

He showed a slide documenting what “label” was given to women in the centre when they arrived, versus other very pressing issues they faced (“they come in with a mental health issue but really the pressing problem was, say, debt or dentistry”) and then what was their real underlying problem. Read his report on its work. 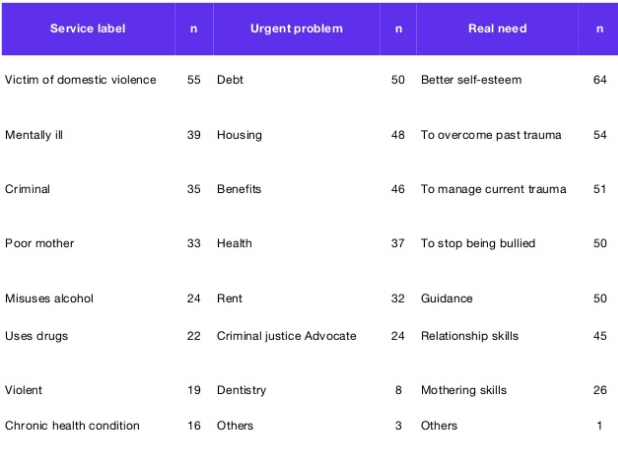 Duffy has worked for many years in self-directed care. His mantra is that it is not choice that is vital, but control over their own lives. He said Australia had lagged in the area in the past, but was now taking it on in a very exciting but risky way, through the NDIS and consumer-directed care in aged services.

“You’ve created a whole new bureaucracy to do it, one big experiment all at the same time using some very elaborate technology,” he said.

“I hope it works because it’s the most exciting thing happening internationally, but I’ve never seen anything quite like this so I’m worried and when I come to Australia I see a lot of worried faces”. The risk, he said was it could become an “expensive mess”.

And he warned that his critiques of welfare were no justification of Big Society style polices, where “suddenly the system its so carried away it forgets that some things can’t be done through individualised funding…You don’t commodify the social worker: some things are infrastructure and need to be treated differently.”

Duffy also questioned the use of the term “consumer” in mental health, and challenged the mental health sector to complete the process of de-institutionalisation, which he said had only just started. Community services were, he said, “at a crossroads”.

He asked: Are they “just a buttress to the empire, part of the system, not really of community?” Or are they organisations of the community, that grow out of it and nurture it?

She said some in the sector would struggle with his opposition to the term “consumer”, given the history behind its use here.

“The other (challenge),” she said, “was the risk that what he is suggesting – community engagement and ownership as an alternative to the welfare state – can be readily appropriated by political forces that perhaps don’t have the best interests of the community at heart.”

She did not believe Duffy was at all naive to that risk: “I think he says that we can’t risk not talking about it.” 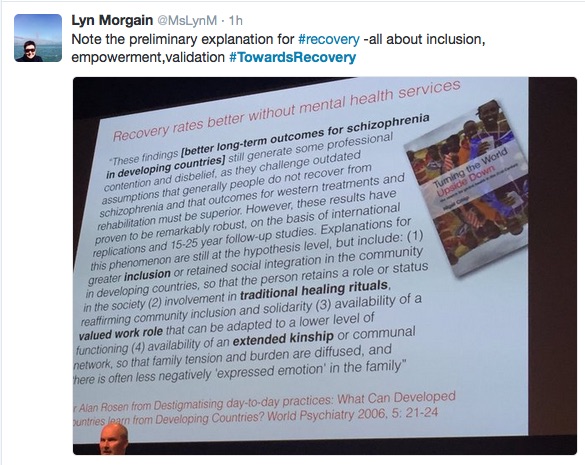 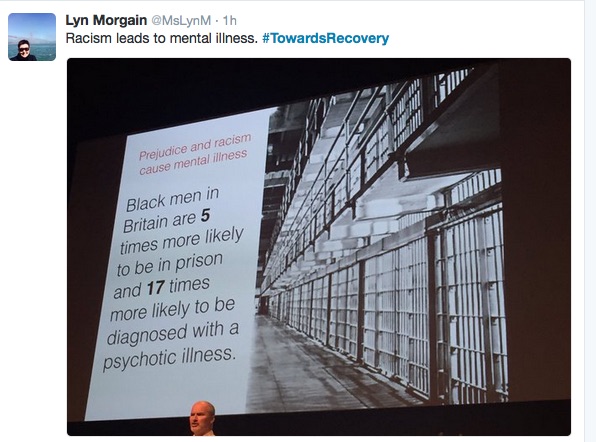 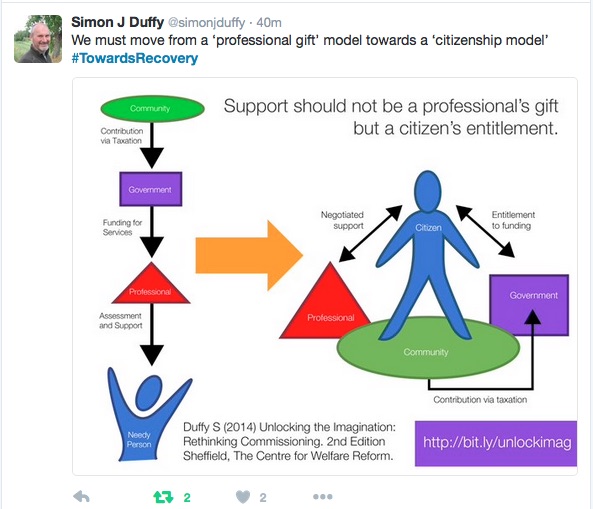 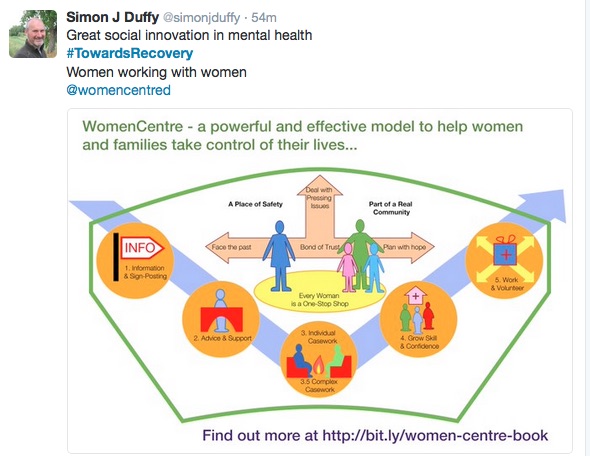 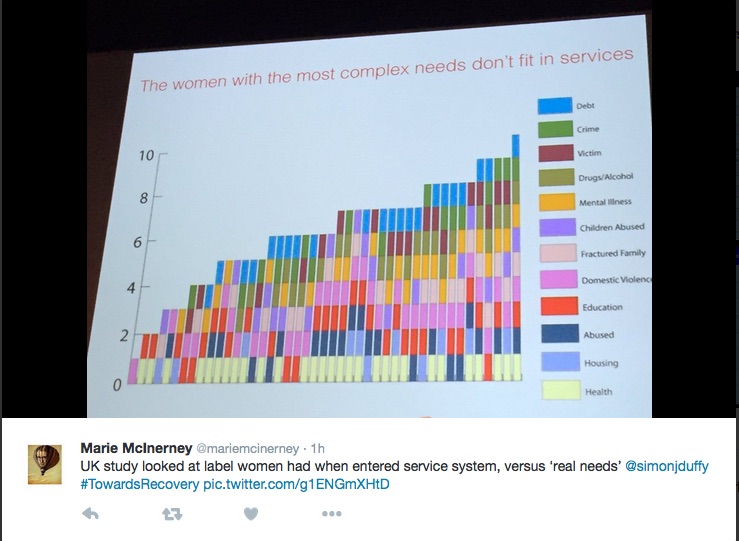 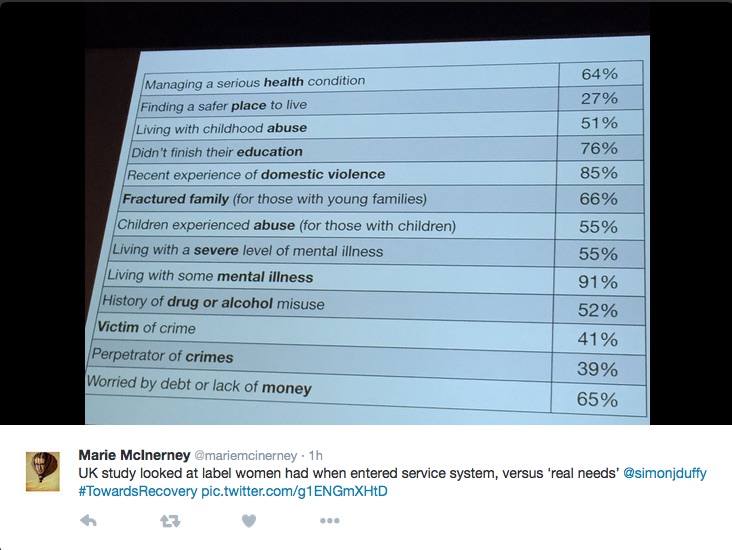 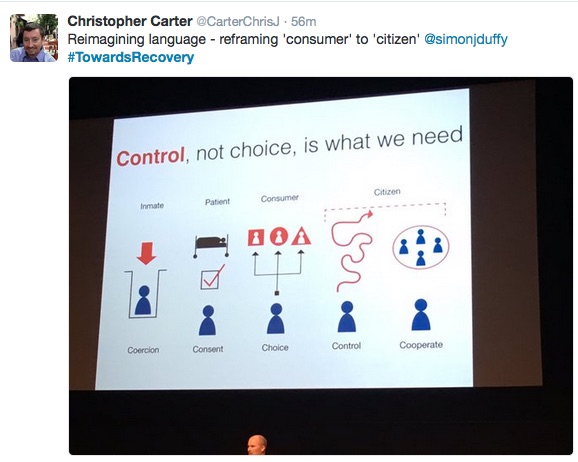 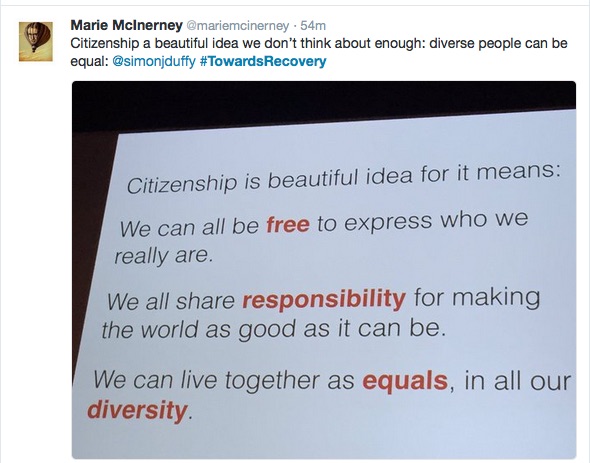 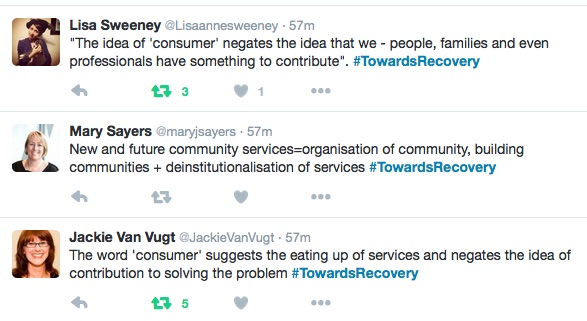 Selfies and snaps from #TowardsRecovery 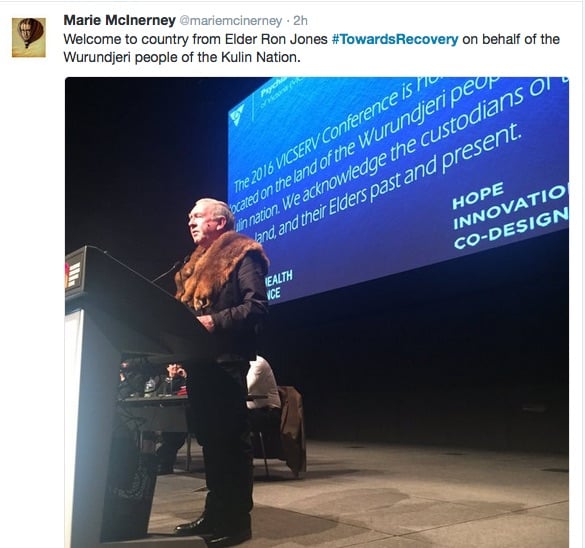 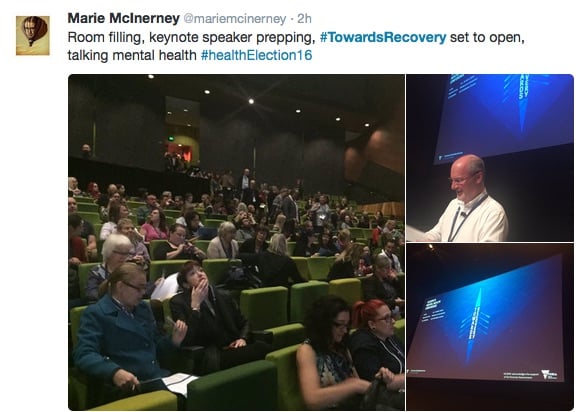 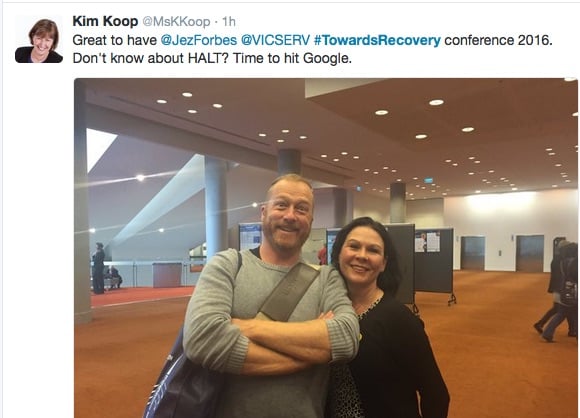 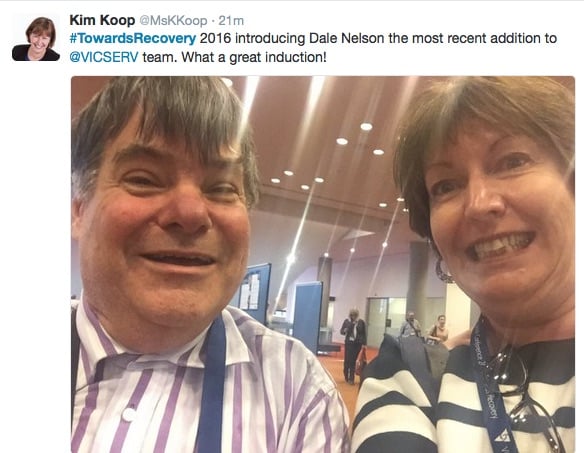 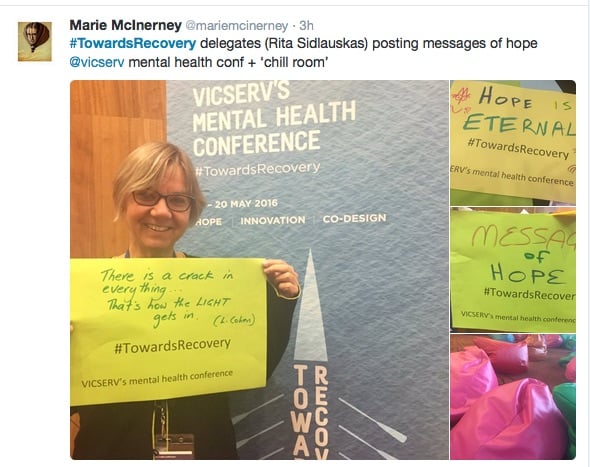 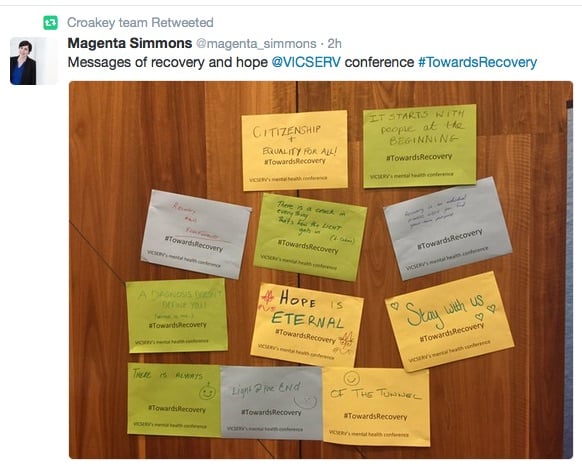 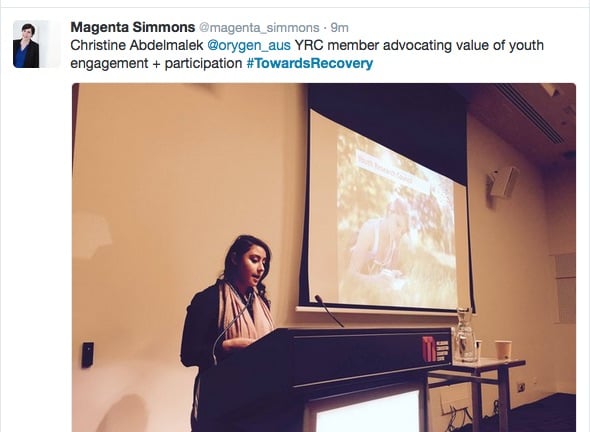 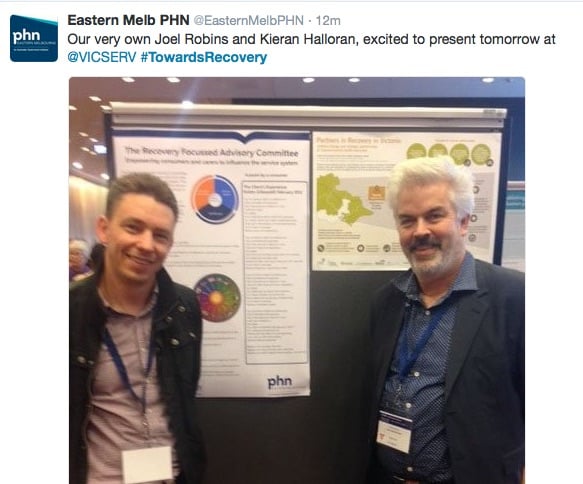 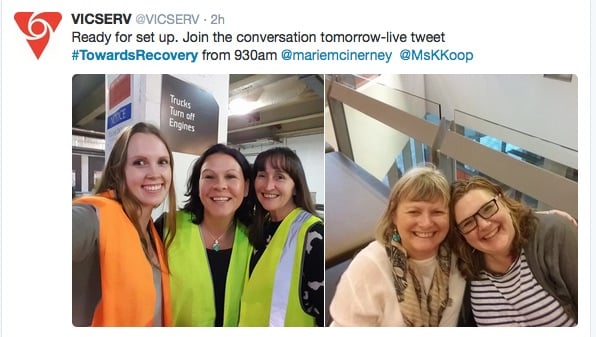 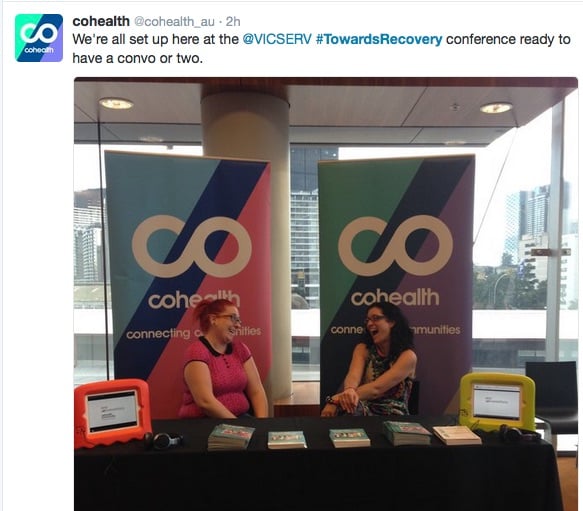 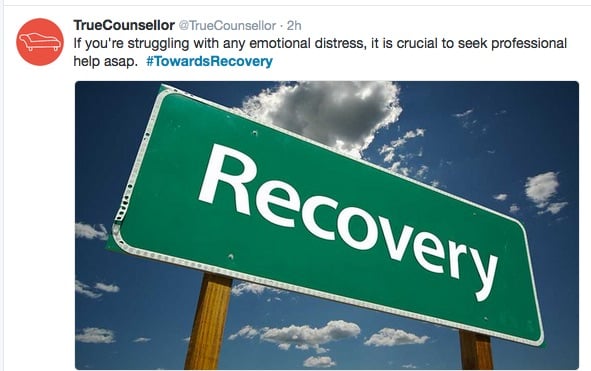 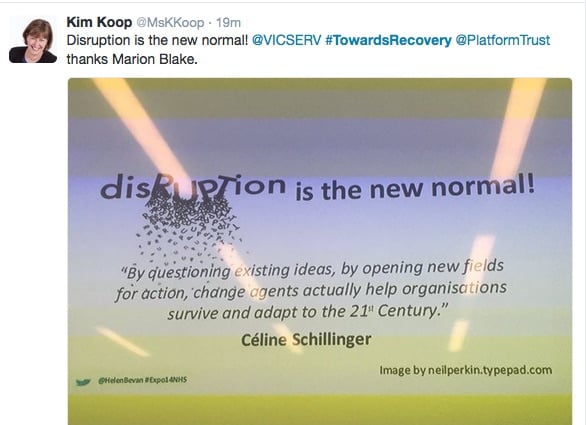 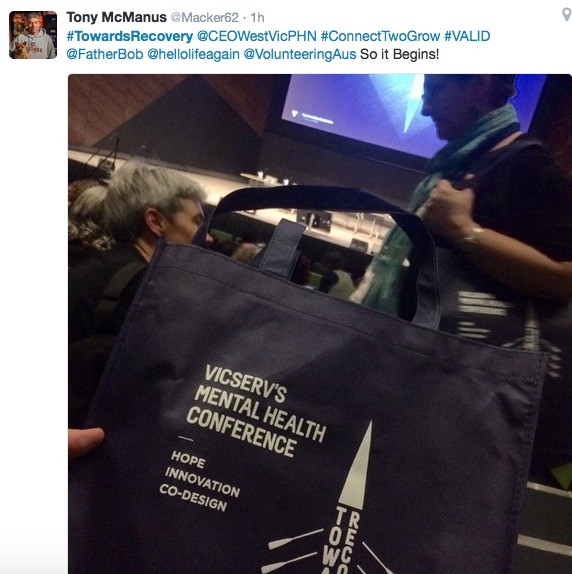 PrevPreviousVale Gayle Woodford: an exceptional nurse, colleague and friend
NextCaring for the elderly or over servicing? While we debate, Frank and Clara quietly starveNext