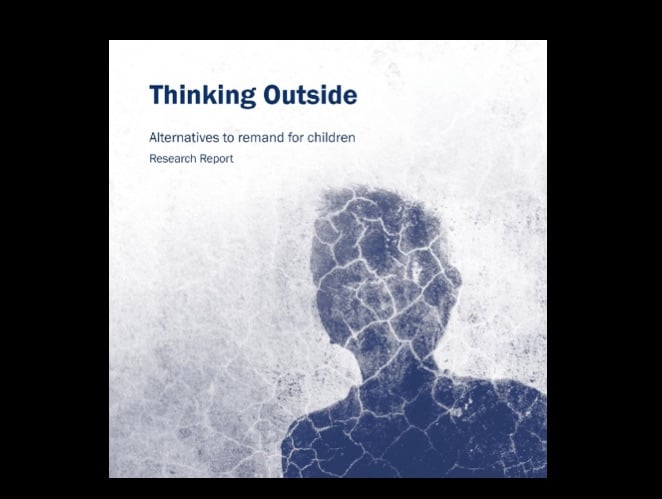 The featured image is from the cover of the Jesuit Social Services report, Thinking Outside: Alternatives to Remand for Children

For children’s sake: Raise the age of criminal responsibility

States and territories have been urged to lift the low age of criminal responsibility, to stop the remand of children as young as ten.

The recommendation comes from Jesuit Social Services, which has released a discussion paper calling for a wide range of reforms to the youth justice system, in the way it responds to offending in children aged 10 – 15 years.

Madeleine Calleja, Policy Research and Advocacy Officer, Jesuit Social Services, writes below that there is widespread support among legal, social and human rights groups for such reforms.

Meanwhile, beneath her post are details of a recent systematic review from the Campbell Collaboration concluding that custodial sentences, such as prison, are no better than non-custodial sentences in reducing re-offending.

“Despite this evidence, almost all societies across the world continue to use custodial sentences as the main crime control strategy,” it says.

Imagine going back to your 10-year-old self. You’re standing outside a cinema, watching people stream in to see a new film that you’re dying to watch.

You wish you had a few dollars to buy a ticket but you spent the little pocket money you receive on a few lollies at school this week. Perhaps it wouldn’t be so bad if you snuck into the cinema, right?

A similar harmless scenario saw a terrified Aboriginal boy arrested and brought before the courts in the Northern Territory, as reported by Julian Cleary from Amnesty International.

This punitive and damaging response is a result of Australia’s low minimum age of criminal responsibility – 10 years – which sees vulnerable children enter the youth justice system at far too young an age.

Recognising the unique vulnerability and risk of ongoing offending for children at this young age, Jesuit Social Services released a discussion paper, “Thinking Outside: Alternatives to Remand for Children”, calling for a wide range of reforms to the youth justice system, in the way it responds to offending in children aged 10 – 15 years.

We recommend that the criminal age of responsibility be raised from 10 to 12 years and a graduated response for 12 – 15 years is ensured to reflect the varying stages of development during these middle years. This was supported by over 30 legal, social and human rights groups.

We are also calling for specialist Koori Children’s Courts in each jurisdiction, recognising the unique vulnerability of Aboriginal children. Statistics show that compared with their non-Indigenous peers, Aboriginal children aged 10 – 14 years are:

Children who enter the youth justice system at a young age are often society’s most vulnerable. Evidence shows that children who offend at a young age are more likely to: be involved with child protection; have come from disadvantaged areas; be developmentally vulnerable; have experienced child abuse, neglect, mental illness and homelessness; and be disengaged from school.

For Aboriginal children, there is the added impact of intergenerational trauma, grief and loss. The negative impact of colonisation has seen generations of Aboriginal people experience racism, dispossession, early deaths of family and community members, the forced removal of children, as well as other discriminatory policies.

The over-representation of Aboriginal people in the justice system also means that young children grow up familiar with life in prison, knowing relatives and community members who have spent time there. For some Aboriginal young people, being incarcerated can seem part of life’s trajectory.

Experts in children’s brain development agree that children under 12 lack the capacities for full criminal responsibility, capacities that don’t fully mature until around 15 years. During the middle years the pre-frontal cortex undergoes a significant amount of development. This part of the brain is responsible for impulse control, planning and decision-making, making children susceptible to peer pressure and sensation and reward-seeking behaviour.

Many people are unaware that Australia’s minimum age of criminal responsibility is much lower than international standards, with 68% of countries having an age of 12 or higher.

UN experts on children’s rights advocate for an absolute minimum age of 12 years, but ideally higher, to ensure the child is emotionally, intellectually and mentally mature enough to be held criminally responsible.

According to Andrew Jackomos, Victorian Commissioner for Aboriginal Children and Young People, “our Koori kids come into contact with the justice system younger and return more quickly. We must raise the age of criminal responsibility and reinvest our prison dollars into innovative community-led solutions that build the resilience of our Aboriginal children and their families and keep them connected to kin, culture and each other”.

The earlier children come into contact with the justice system, the more likely they are to have longer criminal careers.

All states and territories should raise the age of criminal responsibility to 12 and provide a more effective, graduated response to anti-social behaviour for 12 – 15 year olds including specialist Koori Children’s Courts and a legislated framework for diversion.

• Madeleine Calleja is Policy Research and Advocacy Officer, Jesuit Social Services. Jesuit Social Services has a long history of working with young people in the justice system, including those from Aboriginal and Torres Strait Islander background. For more information, visit www.jss.org.au

(Croakey declares and acknowledges the Jesuit Social Services as a premium funder of our #JustJustice series; more details below.)

• Custodial sentences, such as prison, are no better than non-custodial sentences in reducing re-offending, according to this summary of a recent systematic review by the Campbell Collaboration.

Fourteen high-quality studies comparing custodial and non-custodial sentences are included in the analysis. The studies span the period from 1961 to 2013 and are mostly from the USA, Europe and Australia.

In terms of rehabilitation, short confinement is not better or worse than “alternative” solutions. The review says other non-custodial approaches to offender rehabilitation also need to be evaluated, such as those provided through employment or other social networks.

• Washington Post Wonkblog: Poor white kids are less likely to go to prison than rich black kids. This article reports on US research suggesting that racial discrimination is a bigger factor than social and economic disadvantage when it comes to over-incarceration. “Race trumps class, at least when it comes to incarceration,” said one of the researchers involved.

• Listen to Summer May Finlay and Amy McQuire talking about #JustJustice and related issues on the Brisbane-based 98.9FM, part of the National Indigenous Radio Service