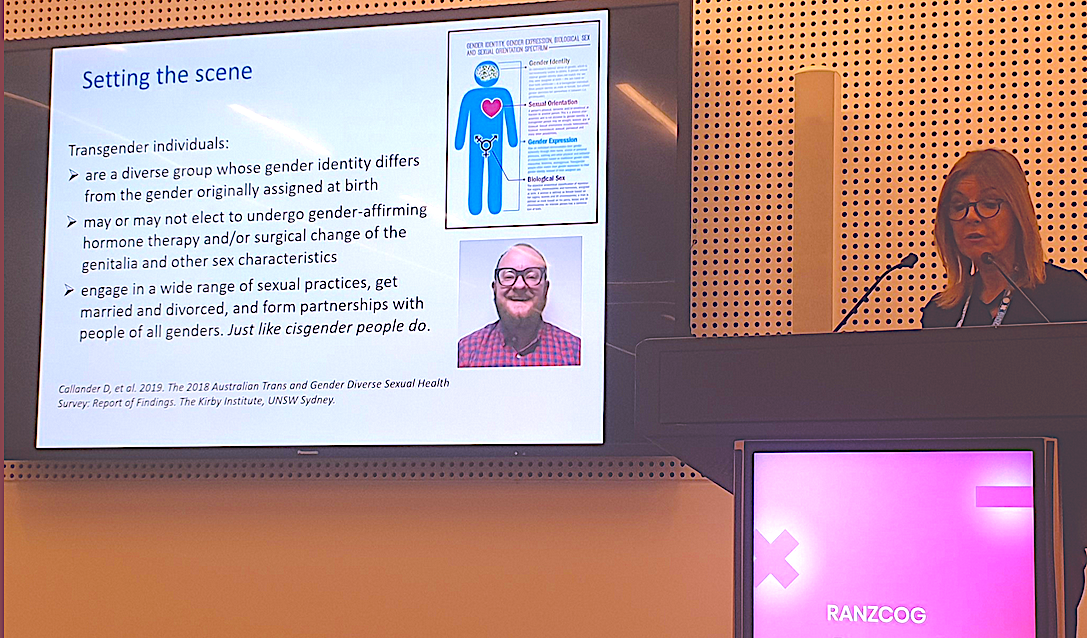 For doctors and other health professionals, some advice on caring for transgender patients

That was the message to obstetricians and gynaecologists gathered for an annual summit of Australian and New Zealand women’s health specialists in Melbourne last week, with the theme, Stop. Start. Continue.

Though it was focused on contraceptive choices, Dr Deb Bateson’s talk in a popular session on sexual and reproductive health offered some important context and practical advice for healthcare workers on the inequalities and systemic barriers confronting trans patients seeking care.

Bateson, who is medical director of Family Planning NSW, said one of the major issues for trans people navigating the health system was that they were expected to educate providers over and over, a burden that was not only unreasonable but contributed to access barriers and poorer outcomes.

Previous trauma or negative experiences with health providers were a significant deterrent for many, as was fear of transphobia, stigma, prejudice, discrimination and abuse. (See here for previous Croakey coverage of this issue, including some sobering statistics on trans and gender diverse experiences of the healthcare system.)

Inconsistent, sometimes incorrect advice on matters, including Pap smears was also a problem, along with misconceptions about contraception for trans patients, whether they were assigned female or male at birth, Bateson said.

She shared the success of Sydney’s Check OUT clinic, run by ACON and Family Planning NSW under the tongue-in-cheek motto ‘At Your Cervix’, which offers HIV and STI screening and cervical screening for all LGBTQI+ people with a cervix. It is run by community peer workers and trained sexual health nurses.

Importantly for delegates at the annual Royal Australian and New Zealand College of Obsetricians and Gynaecologists (RANZCOG), Bateson said the skills and knowledge of health professionals, and a lack of resources and referral networks represented a real barrier in trans health, and one she was there to – hopefully – help them address.

The session followed a powerful plenary address from paediatric gynaecologist, Dr Charlotte Elder, at the 2018 RANZCOG ASM, on delivering trans-affirming care. We covered the session in detail here.

Bateson reminded colleagues that transgender patients were a diverse group who engaged in a range of sexual practices and relationships and who may, or may not, have elected to undergo hormonal or surgical affirmations.

Their experiences of sex, and sexual and reproductive health were unique, and this was an emerging field of medicine encompassing both general and specific health needs, including but not limited to:

The single most important thing Bateson said delegates could do was avoid assumptions, whether this was about a patient’s gender, body, sexual orientation or sexual partners.

Rather than assuming, Bateson encouraged doctors to ask about all these things – not only in the interests of disclosure, but because it helped to foster trust. 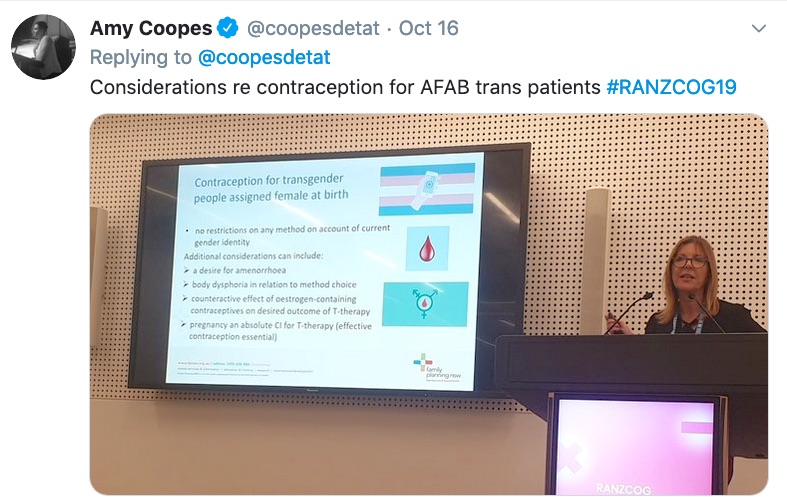 It was also critical not to make clinical assumptions about issues like screening and contraception without a firm knowledge base, she added, sharing some startling data from the US showing that a quarter of trans men had experienced an unintended pregnancy after transitioning, believing that testosterone had a contraceptive effect.

This misconception was prevalent not only among trans men but also their doctors, said Bateson. While testosterone therapy (or ‘T’) could cause periods and ovulation to cease, it was not reliable as a form of contraception, she added, impressing upon colleagues that they needed to discuss alternative methods with anyone engaging in ‘penis in vagina sex’, particularly given that pregnancy was an absolute contraindication for continued administration of T.

When having these discussions Bateson said it was important to weigh a host of other factors for trans masculine patients, including desire for amenorrhoea, body dysphoria, and how methods containing oestrogen would counteract testosterone therapy.

She also counselled colleagues to consider the increased risk of HIV transmission for patients on T due to increased friability of the vaginal mucosa, a side effect that she said could also make speculum insertion more uncomfortable.

She took delegates through the pros and cons of various methods, ranging from condoms (protection against STIs but relatively high failure rate), tubal occlusion (permanent), and a range of progestogen-only methods (variable efficacy, unpredictable bleeding), as well as intrauterine devices such as the Mirena (efficacious, but may require sedation in cases of pelvic dysphoria and/or or topical oestrogen to reduce discomfort).

Given the very real risk of pregnancy, Bateson implored colleagues not to forget the morning-after pill and copper IUD as options following unprotected vaginal intercourse.

For AMAB (assigned male at birth) trans feminine people, Bateson said options were currently limited to condoms and vasectomy. Like testosterone therapy, though oestrogen therapy and testosterone blockers decreased sperm count and motility, they were not reliable forms of contraception.

In her final slide, Bateson had one simple message:

Stop to consider, start to build knowledge and continue to develop skills.”

The Australian Standards of Care and Treatment Guidelines mentioned above are available here.

In pre-meeting workshops, Dr Ruth McNair, a global leader in LGBTQI health at the University of Melbourne, also delivered a session on trans health in which she singled out some of the challenges for doctors working in this space: 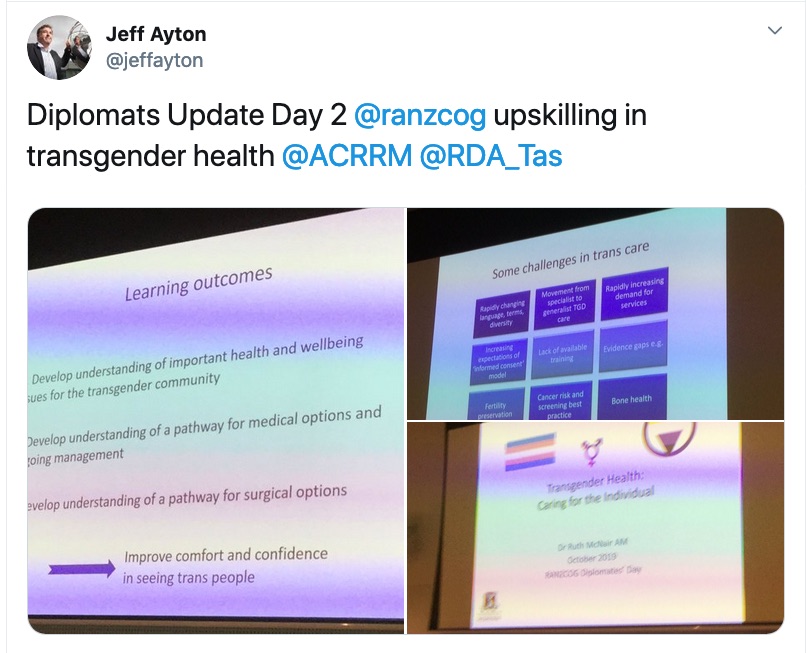 Melbourne-based paediatric gynaecologist Professor Sonia Grover laid out some basics for working with trans patients, including inquiring about what pronouns a patient would prefer and what name they went by.

It was essential to frame this appropriately, by asking for example ‘what would you like me to call you’ or ‘what do your friends call you’, and to use acceptable terminology, such as ‘top’ or ‘chest’ surgery instead of ‘mastectomy’.

For gynaecologists treating trans men, Grover said pelvic pain, bleeding, endometriosis and cervical/STI screening were some key things to remember, as well as hysterectomy and oophorectomy.

With referrals to the Royal Children’s Hospital Gender Dysphoria Service increasing one hundredfold between 2003 and 2014, Grover said it was important to get this right, not just for O&G specialists but for every healthcare worker coming into contact with trans patients. 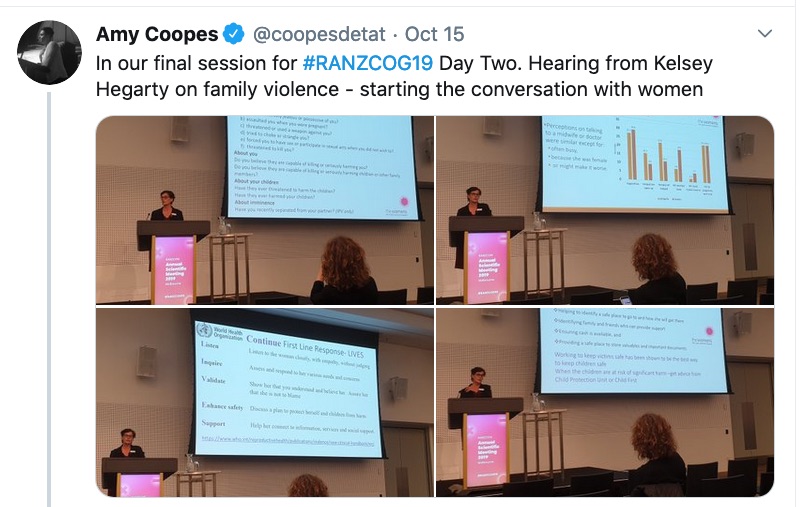 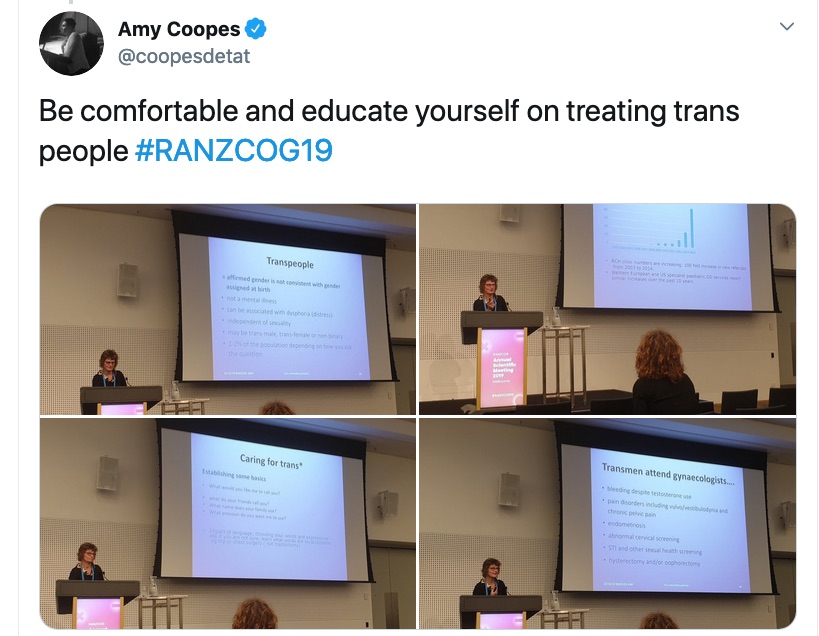