For patients to be informed & empowered, they need access to medical records

Patients are often urged to take greater responsibility for healthcare decisions – but this is easier said than done when access to medical records is not consistently available. 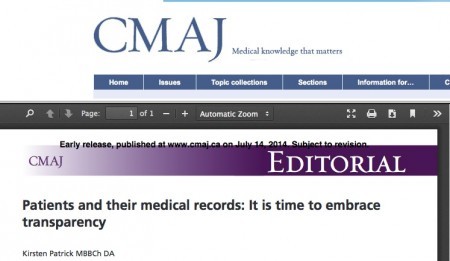 I was reading a recent editorial in the Canadian Medical Association Journal, Patients and their medical records: it is time to embrace transparency, and was reminded that I had some blood tests over the last fortnight.

At the time of testing, I asked the nurse if I could have a copy of the results in addition to the requesting clinician.  Hesitation was the first reaction and then a short lecture about the results being sent to my referring clinician.  I should make an appointment to see the clinician.

I persisted and was asked to fill in a form (I’ll call it Exhibit A, but I’m not attaching it!), which, I was assured, would be sent to head office.

A fortnight later and I hadn’t heard anything so I emailed the head of pathology.  I find that usually when I ask for copies of tests, reports or correspondence, I’m starting from behind.  I therefore explained in my email the reason for wanting a copy, which went something like:

In my time on the Council of the NHMRC and also at meetings of other august bodies, I’ve heard many very clever and talented clinicians talk about how important it is for patients to take responsibility for their health and well being.  I don’t think my request was inconsistent with that philosophy.  Indeed, I’ve been known to respond with a quick repartee “well, let us!  Give us the tools.”

I was delighted when the head of pathology rang me and told me he agreed entirely with my approach.  He spoke about some anxiety that some pathologists have about what patients might do with unexplained test results.  His other alert related to privacy, which is why this particular pathology service does not provide patients with emailed test results.  There had been some hiccough in my request, and I was assured that active consideration was being given to improve the system so that such requests don’t fall through the cracks.

Moving to Exhibit B, my radiological studies that I also had in the last fortnight.  The diagnostic imaging company shifted to paperless reporting some while ago.  What it has enabled the company to do, though, is to also give patients log in rights for their own images and reports.

So, last Thursday, two hours after my chest x-ray, I was able to access my reports and images in the privacy of my own home, in my dressing gown, with ugg boots on, without having to go out in the freezing cold.

All of my treating clinicians had access to the information at about the same time.  I didn’t have to waste anyone’s time by ringing the clinician’s rooms to find out whether I needed to take any more drugs.

I am shortly to have surgery and the anaesthetist’s staff are having conniptions about my underlying lung problems*.  I have been able to provide them with copies of correspondence from other clinicians who treat me, which gives the anaesthetist some useful background about the size of the problems to be managed.

Compare this with Exhibits C and D, my medical records from two teaching hospitals over the last ten years.  I had thought I would look through them as a precursor to writing the odd paper about why I have been lucky enough to survive a pretty horrible illness.

The only way to obtain my records was to apply under freedom of information processes.  I couldn’t visit the hospitals and take notes, as they are interstate hospitals, not just round the corner.

One hospital charged me $33 and the other $108.70.  I was a patient of the former hospital for only about three months, and the latter for about ten years.  Great wads of paper arrived in the mail.  Someone had spent hours printing my records.  Yet, for each consultation at the more expensive hospital, all records are digitised.

I know that there is anxiety about privacy, as explained to me by the hitherto described fabulous head of pathology.  But if a patient gives consent, surely there is no reason that such records could not be emailed.

There is no consistency in the Australian setting, as I have just described.  Dr Patrick has noted that such access will be imposed upon clinicians unless they embrace the concept; they’ll then be on the back foot as to how such regulations might be implemented.

Australia’s Personally Controlled Electronic Health Record (PCEHR) ought to overcome some of these problems.  I can’t for the life of me understand why it is taking so long, though.  I have had an eGovernment account for some time and the only records in the health component relate to MBS and PBS charges.

Maybe the radiologists and pathologists are the leaders here, given that they have already embraced the concepts.  Partner them with patients and whoops, we might have something that, as Dr Patrick has described, patients like.

And like it they do, as they can take lead responsibility for their own health and well-being.

*Quite rightly as I have an underlying condition called idiopathic pulmonary fibrosis.  If you’re interested, I was diagnosed via lung biopsy in 2003.  My gas transfer rate at the time was 43%.  Unusually, it has gradually improved to 80% without a lung transplant which I had been listed for in about 2005.  No one has an inkling about why this has occurred as the normal trajectory is a downward one, right down into a coffin within three to five years.

• Anne Cahill Lambert, AM, has much to say on a range of matters including consumer participation.  She has a Bachelor’s degree in health management and a Masters in public administration.  She’s on twitter: @ACLambert