For those with a concern for public health, what were the highs and lows of 2014?

If we look back at 2014, perhaps we gain some insights that might help in steering a better 2015.

In the post below, Croakey contributors nominate the highs of the past year – including how some countries and volunteers responded to the Ebola crisis in west Africa, and a resurgence of concern about climate change and inequalities.

Interestingly, some of the same issues were also nominated as the lows of 2014 – the inadequacies of the global and Australian response to Ebola, the Federal Government’s savage cuts to health and social funding, including those to foreign aid, and the lack of national action on climate change.

Q: What were the highlights of 2014 (whether for public health, global health, Australian politics, or you personally)?

Fran Baum, Flinders University
Seeing how Cuba responded so fantastically to the Ebola epidemic and sent far more health care workers than other countries.
The outcry over the GP co-payment, proving how much Australians value Medicare.
Winning a NHMRC Centre of Research Excellence on Social Determinants of Health Equity: Policy research on the social determinants of health equity with my friend and colleague Prof Sharon Friel and a team of fantastic researchers.

Mark Harris, University of NSW
The dedication of volunteers and other working for health NGOs both in Australia (with asylum seekers and refugees) and overseas (including in response to Ebola).

Tom Symondson, Acting Chief Executive of the Victorian Healthcare Association
I was humbled and amazed by the incredible bravery of the healthcare workers fighting the Ebola outbreak of West Africa. It is an absolute testament to the dedication and compassion of these individuals as they put themselves in danger to help people suffering from a disease that strikes fear across the globe.
The highlight of 2014 is, as always, family. I counted down to arriving in the UK to spend Christmas with family and friends, but most especially my three-year-old niece, who I haven’t seen for two years.

Gawaine Powell-Davies, University NSW
The sense that fairness is still an Australian value, and that it is being seen as a critical aspect of economic and health policies.

Stephen Leeder, Emeritus Professor, University of Sydney.
Advent of Ebola reminded us of the power of social determinants of health when combined with a lethal virus.
Obama addressing the UQ students on climate change.

Michelle Hughes, Croakey moderator
The resurgence of a global movement to act on climate change.

Margaret Faux, a lawyer, the founder and managing director of one of the largest medical billing companies in Australia and a registered nurse. She is a research scholar at the University of Technology Sydney
The celebration of the life of the great Gough Whitlam and Noel Pearson’s phrase ‘..the triumph of reform over management.’ And Joe Hockey conceding he wouldn’t be delivering as much of a surplus as he had hoped!

Ginny Barbour, PLOS medicine editorial director
Personally – I have really enjoyed my move to Australia, understanding more about the health landscape here, and meeting a huge range of people including many in health research and medical publishing.
On social media there were some real examples of its power to unite in a good way – the #putoutyourbats tribute to Philip Hughes and the #illridewithyou as a marvellous response to a desire to not target Muslims in the wake of the Sydney cafe siege.

Lea McInerney, writer, facilitator, strategic planner
The Nobel Peace Prize going to Kailash Satyarthi and Malala Yousafzai – for their “struggle against the suppression of children and young people and for the right of all children to education” and also for the fact of them being an older man and young woman, and an Indian and a Pakistani.

Julie Leask, School of Public Health, University of Sydney
Mentoring a group of talented and dedicated postdoctoral and postgraduate researchers all working towards improving vaccination rates.

Ross Green, health communicator, Melbourne
I thought this year had some wonderfully fresh and innovative public health awareness campaigns, including:

The list goes on and on, and I’ve missed so many (sorry!). I would love to know what caught other people’s attention!

Peter Tait, GP, ANU lecturer
Personally – getting to this end of it still breathing; public health, speaking at Taiao Ora in NZ and the general good reception to expanding recognition of the ecological determinants of health.

Luke van der Beeke, Managing Director, Marketing for Change
The news that there were some promising steps forward in the search for a cure for Type-1 diabetes was very pleasing.  There’s clearly a long way to go, but the research looks encouraging.

Tim Senior, GP and Wonky Health columnist
Not many highlights in the national sphere. Locally, my Aboriginal Community Controlled Health Service has a beautiful new building that we will be moving into next year. The pride in the community about this is palpable, and it is special to witness and be a part of it.

Jeanette Ward, public health consultant, Adjunct Professor, University of Ottawa
Observing Indigenous doctors at work.  As an associate member of the Australian Indigenous Doctors Association, it has been wonderful to see first hand the steady accomplishments of Indigenous Fellows at work in the Kimberley. They’re an inspiration!

Kristine Olaris, CEO, Women’s Health East, Melbourne
The prevention on violence against women made it to the political agenda nationally – and in Victoria it became an election issue for the first time.
The greatly increased profile of women in politics in Victoria with a record number of women elected to parliament in the November election.

Eliza Metcalfe, health communicator, Melbourne
One of the highlights of 2014 for me was a totally selfish one – saving my raspberry crop from the birds; the other has been the opportunity that Ross Green and I have had to work with the AusSHI team, they’re doing amazing work and that’s been a real privilege.

Marie McInerney, Croakey moderator, freelance journalist/editor
For me, covering a range of conferences for Croakey that brought me into the orbit of a number of Aboriginal and Torres Strait Islander people and organisations, particularly the Lowitja Institute and the Australian Indigenous Doctors Association.
More broadly, seeing family violence register as a top political issue at the recent Victorian state election, in part because of some very tragic deaths but also because of powerful advocacy by Rosie Batty, family violence groups and Vic Police Commissioner Ken Lay. (disclaimer: I worked on one campaign).

Luke van der Beeke, Managing Director, Marketing for Change
The global response to Ebola was a lowlight.  At one stage there it looked like the UN fund was going to run out of money.

Tim Senior, GP and Wonky Health columnist
So many to choose from. Should I go for our delayed Ebola response or our sickening treatment of refugees? Aboriginal and Torres Strait Islander people have been under attack from all quarters, with funding cuts, policy uncertainty, the PM consistently ignoring Indigenous history and whole communities under threat in WA.
The real lowlight, though, must be the Federal Budget. Universally rejected as unfair, it opened up multiple surprising policies that attacked people for being poor – the GP co-payment, university deregulation, keeping young people off benefits for 6 months, cuts to foreign aid – all from a government that promised no surprises.

Julie Leask, School of Public Health, University of Sydney
Seeing Sierra Leone, Liberia and Guinea struggle with Ebola without quick and definitive help from Australia and other countries.

Fran Baum, Flinders University
So many dying from Ebola.
The massacre of over 100 children in Pakistan just because they were at School on 16th December 2014.
The downing of MH 370 and killing of so many.
Lack of funding to keep the People’s Health Movement sustainable

Don Perlgut, University of NSW
The Ebola virus outbreak, to which developed countries paid too little attention, too late.

Ginny Barbour, PLOS medicine editorial director
The lack of seriousness of the Government in addressing climate change, including the repeal of the carbon tax, the reluctance to commit to the Green Climate Change Fund until they had no choice.
The appalling ongoing treatment of asylum seekers, especially children.

Michelle Hughes, Croakey moderator
The continued detention of children and basically anything that Scott Morrison said about asylum seekers or immigration policy.
The thinly veiled attack on universal health care by the federal government.
The response to Ebola.

Mark Harris, University of NSW
Unfortunately there were several:-

Marie McInerney, Croakey moderator, freelance journalist/editor
The Federal Budget, particularly cuts and uncertainty for Aboriginal and Torres Strait Islander organisations and programs and terrible policies re young unemployed people. Asylum seeker legislation, which got through the Senate with just one vote and has sweeping changes to the very notion of asylum. Zero focus on housing issues at state and federal levels. The death of Stella Young.

Gawaine Powell Davies, University of NSW
The failure of political parties to make a sustained critique of the neo-con agenda of this government, or to champion the role of government and civil society.

Amanda Wilson, University of Newcastle
Growing disparity between rich and poor in Australia and the lack of foresight in investing in our future in terms of health, social policy and education.

Ross Green, health communicator, Melbourne
The Australian Government’s continued dreadful and inhumane treatment of asylum seekers, as well as their complete disregard for the need to tackle climate change.

Kristine Olaris, CEO, Women’s Health East, Melbourne
At least one woman per week has been killed by a current or former partner in Australia again this year.
We still have only one woman in federal cabinet.
The national gender pay gap grew to 18.2% – the highest it has been in twenty years. The gap is greatest in the health care and social services sector where it stands at 30.7%.
Saying farewell to price on carbon.
The federal budget & its implications for health equity.

Peter Tait, GP, ANU lecturer
The attitude displayed by the government in its budget; talk about mean spirited and out of touch with the real people.

Tom Symondson, Acting Chief Executive of the Victorian Healthcare Association
Local: The continued pre-occupation with beds and small capital projects from all sides of the Victorian election campaign.
National: The Federal Government’s demolition of the national health reform agreement.
International: the horrific conflict in Syria and the impotence of the international community to deal with it.

Margaret Faux, a lawyer, the founder and managing director of one of the largest medical billing companies in Australia and a registered nurse. She is a research scholar at the University of Technology Sydney
The passing of the great Gough and the loss of the father of universal health insurance.
Scott Morrison re-introducing temporary protection visas.

Anonymous
Abbott dodging the climate change debate at the G20.
Abbott not taking seriously his commitment to Indigenous constitutional recognition.… and the many broken Abbott promises.

Eliza Metcalfe, health communicator, Melbourne
Personal ones – my broken arm and my husband’s gallbladder removal. Up close encounters with our health system are always bittersweet. The steady chipping away at Medicare by our Federal Government fills me with fear and sorrow. First Dog on the Moon’s cartoon sums up federal politics for me in 2014 perfectly. 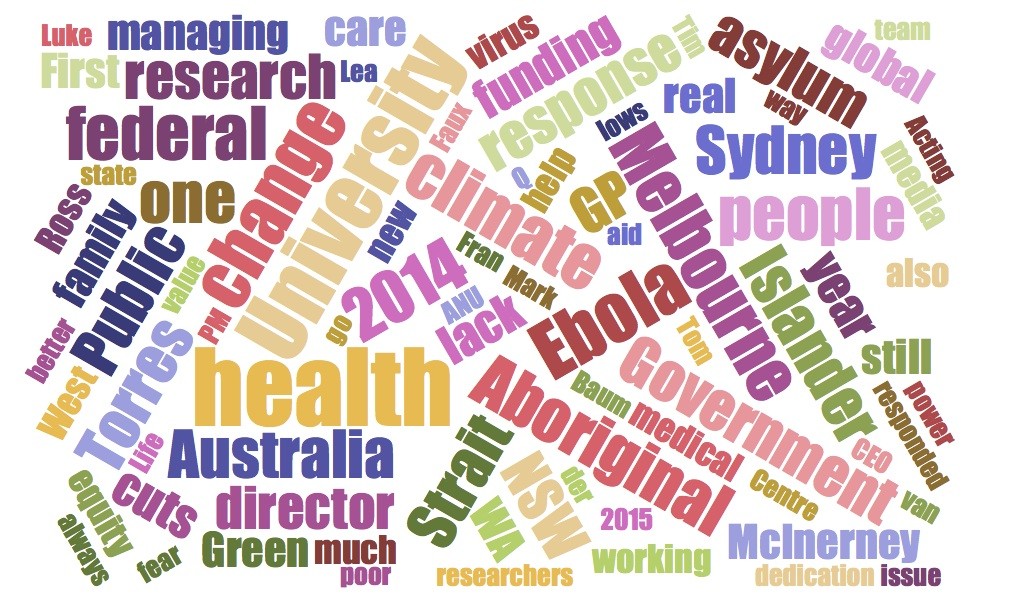 PrevPreviousBest wishes and thanks, from the Croakey team
Next“Try a little kindness” and other collective resolutions for 2015Next