For your reading, viewing and reflection – on the 26th January

Today marks the 80th anniversary of the first Day of Mourning, when Aboriginal men and women marched in Sydney in 1938 to protest their dispossession and the many abuses of their human rights (here you can read some of the speeches that were made).

From 1946, January 26 was called Australia Day in all states and territories, although it did not become a national holiday until 1994. The #ChangeTheDate movement has been gaining momentum over recent years, as evidenced by this growing collection of related media articles.

As tens of thousands of people today join #InvasionDay and #SurvivalDay protests, marches and events around the country (see this list compiled by The Guardian), there is no shortage of articulate and powerful commentary to inform reflections about the significance of 26 January – including for the health and social and emotional wellbeing of Aboriginal and Torres Strait Islander people.

Beneath the article below – by Professor Maggie Walter, Pro Vice Chancellor (Aboriginal Research and Leadership) and Professor of Sociology, University of Tasmania – is a series of links to other recommended reading and resources.

The article below, titled “First reconciliation, then a republic – starting with changing the date of Australia Day”, is cross-posted from The Conversation.

I have always been rather taken with Gary Larson’s Far Side cartoon which depicts a man getting out of bed in the morning, reading a very large poster on his wall that says:

First pants, then your shoes.

This stating of an obvious but critical ordering of events has salience for the debate over whether Australia should become a republic. Reconciliation between the Settler and First Nations populations is a self-evident prerequisite for Australia cutting the ties of colonial dependency with Britain to stand on our own.

If we can’t work out that we need to complete the peacemaking between Indigenous Australians – the sole occupiers of the Australian continent for upwards of 60,000 years – and those whose ancestors arrived at or post-1788, we are not ready to be a republic.

We might be attracted to republican prestige, with its sense of a national coming of age, but we can’t just take the title. Being a republic brings with it the responsibilities of being a grown-up country.

Changing the date of Australia Day is the first tiny step for Australia, both as a nation and a society, to begin the reckoning with its origins. The Australian nation-state is founded on the dispossession of the people of the lands the nation-state now occupies, and from which it draws its wealth and identity.

It’s as simple as that. No ifs, no buts. Australia Day observed on January 26 celebrates the date on which the British flag was first raised in Sydney Cove in the act of colonisation.

Further reading: Why Australia Day survives, despite revealing a nation’s rifts and wounds

The debate over the date

I am heartened by the growing calls from so many non-Indigenous people and groups to change the date of Australia Day. But I am also despairing that so many still do not seem to understand why celebrating January 26 is deeply hurtful to Indigenous people.

Perhaps, as Henry Reynolds suggests, many non-Indigenous Australians simply do not know what January 26 represents. Maybe. But most do know that the date is connected in some way to Indigenous dispossession.

It is also well known what this day represents for Indigenous people: the massacres, the near-genocides, the abduction of women, the forced relocations, and the denial of basic human rights dictated by the euphemistically named Aboriginal Protection Acts – some not fully repealed until the 1970s. Why would Indigenous people choose to celebrate that?

Or, as Mark McKenna writes, for many, Australia Day is constructed as cut loose from history. The past is the past, it is argued, so why can’t we all just celebrate what’s good about Australia on January 26?

Further reading: More than an excuse for a long weekend – how we came to love Australia Day

Yes, colonisation is a fact that can’t be undone. Nobody knows this better than Indigenous people. But celebrating Australia Day on that date is the opposite of a present/future focus.

January 26 was selected purposefully to commemorate that past by declaring the initial act of colonisation as the most important event in the Australian historical calendar. Why does non-Indigenous Australia choose to celebrate that?

That the political proponents of keeping the date as it is know what January 26 is actually celebrating is clear in their deployment of noble sentiment as obfuscating defence.

Prime Minister Malcom Turnbull, in a 2017 speech on the topic, is fairly typical in this regard. Castigating the Yarra Council over its decision to stop referring to January 26 as Australia Day, Turnbull argued Australia Day is the day on which we recognise and honour our First Australians and our newest migrants – and to change the date would be to turn our back on Australian values. He has made similar remarks in recent days.

Dressing up the pre-eminent day of commemoration in the Australian calendar as something other than this, as somehow about Australian values or a day that all Australians can take pride in, or – even as Turnbull asserts – a day when we recognise First Australians and our history, is just a dishonest diversion from the actuality.

We are convincing no-one, not even ourselves, that we are doing anything else on January 26 but celebrating colonisation and the dispossession of Indigenous people.

If we aren’t celebrating the colonisation of Australia, then there should be no problem in changing the date. If we are, then be honest about it without resorting to self-deceptions.

An Australia Day worth celebrating

Again, on January 26 this year, I, along with many other Indigenous and non-Indigenous people, will march down Elizabeth Street to the Tasmanian parliament lawns for rousing speeches and emotional protest.

In fact once the date is changed – as it inevitably will be – I will miss the event’s camaraderie. It has become a January ritual.

What if Australia Day was a day on which we came together rather than celebrating the dispossession of one by the other?

Now that is an Australia Day worth celebrating.

But that day has not yet come. Instead, our leaders resolutely insist that this is the date most appropriate to hold our national day of celebration – and sanction those who disagree.

For Indigenous people, this tenacity can only be read as callous disregard. To do so in the shadow of overt refusal of the efforts of Indigenous people to advance reconciliation through the Uluru Statement from the Heart reinforces the political message of callousness. It also demonstrates a national immaturity.

Further reading: Listening to the heart: what now for Indigenous recognition after the Uluru summit?

A developed society reconciles its past with its present, resolving what needs to be resolved, settling what needs to be settled. For Australia, the result could be a new national narrative: one we wouldn’t have to resort to duplicity to celebrate, one more befitting an aspiring republic.

Drawing from the wisdom of the Far Side cartoon: Australia, first change the date to begin a just settling, then contemplate becoming a republic.

• Amy McQuire for Buzzfeed: To celebrate Australia Day is to celebrate violence
Also watch the first episodes of her series: What They Don’t Teach You, part one, part two, and part three.

• Also make sure to watch Occupation Native, now streaming on SBS on Demand – it will make you laugh and cry.

• Watch Carla McGrath, pictured below, in this video from Get Up. 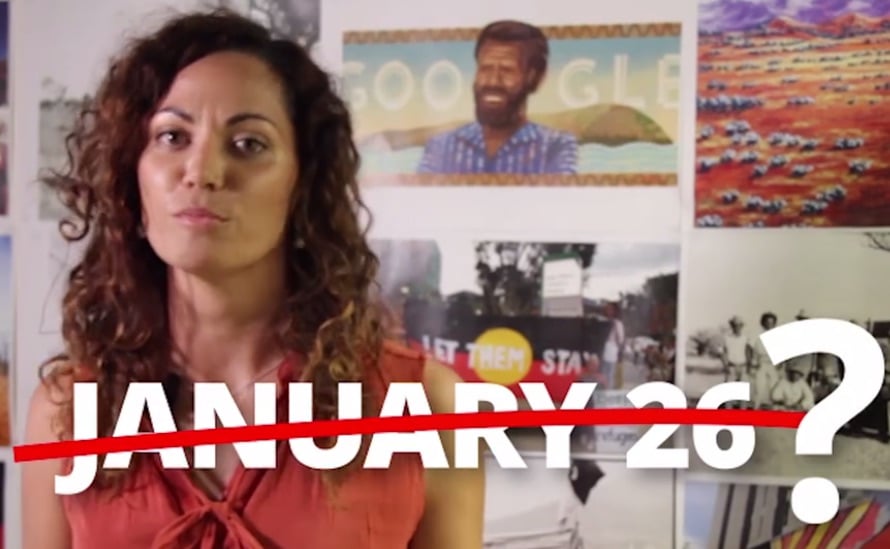 • The hypocrisy of Australia Day, by Koori History

• We don’t leave the house on Australia Day: Star Observer

• In this statement, John Singer, the chairperson of NACCHO, calls for “Community leaders across the states and territories to lead a national inclusive discussion and debate on why we need to change and nominate a new day for modern Australia to truly celebrate our diversity”.

• Gemma McKinnon at ABC: If Indigenous Voices Can’t Even Be Heard on Australia Day, What Hope Have We Got?

• The Australian Indigenous Psychologists Association and the Australian Psychological Society call for respectful dialogue, and also have put out tips for self-care. Also, see this previous AIPA article at Croakey: How can we create an inclusive day for all Australians to celebrate? 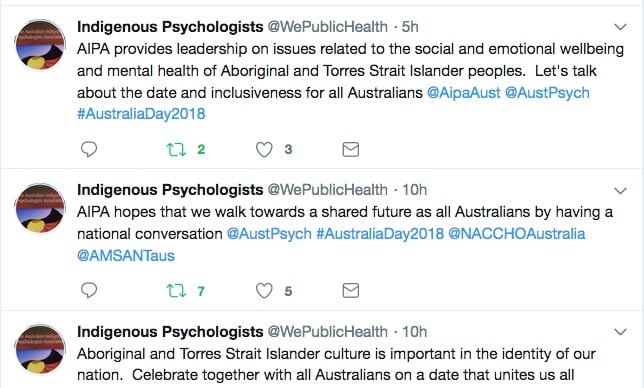 • The Edmund Rice Centre has published six ways for non-Indigenous people to stand in solidarity with Aboriginal and Torres Strait Islander people, including by: understanding and learning the truth about Australian history; attending a Survival Day event; and getting political, for example by “contacting your local MP to demand they take action this year to support the Uluru Statement or calling on the Parliament to take action to reduce incarceration rates by signing our petition”.

• Meanwhile, more than 9,000 people have signed this Amnesty petition for #ChangeTheDate (as of 8pm on 25 January).

•  Why brands should think twice about celebrating Australia Day, at Mumbrella 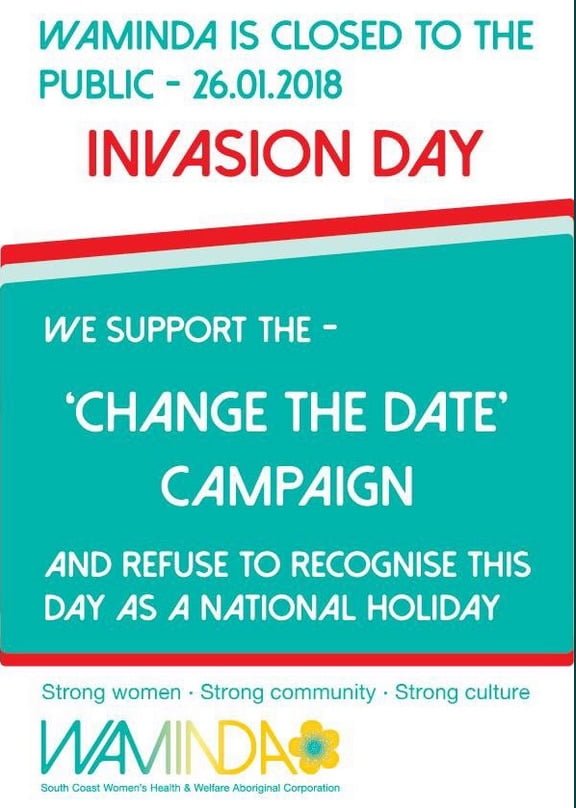 Acknowledgement: The image is credited to Waminda and was tweeted by Marlene Longbottom

• Professor Tom Calma writes at The Conversation: A modern and united Australia must shift its national day from January 26.

• Statement from the Australian Association of Social Workers (AASW) calling for a national day which is inclusive of all Australians, including Aboriginal and Torres Strait Islander people.

• Reconciliation Australia CEO Karen Mundine says the growing number of Australians supporting the movement to change the date were not only acknowledging the truth of our shared history but also expressing a desire to set things right.

• Staff at the Australian Healthcare and Hospitals Association went to work on 26 January in solidarity with the #ChangeTheDate movement, as tweeted by CEO Alison Verhoeven.

• Dr Chelsea Bond wrote on The Audacity of Anger for IndigenousX.

If you are experiencing sadness or trauma, you are encouraged to seek out the following services and support: