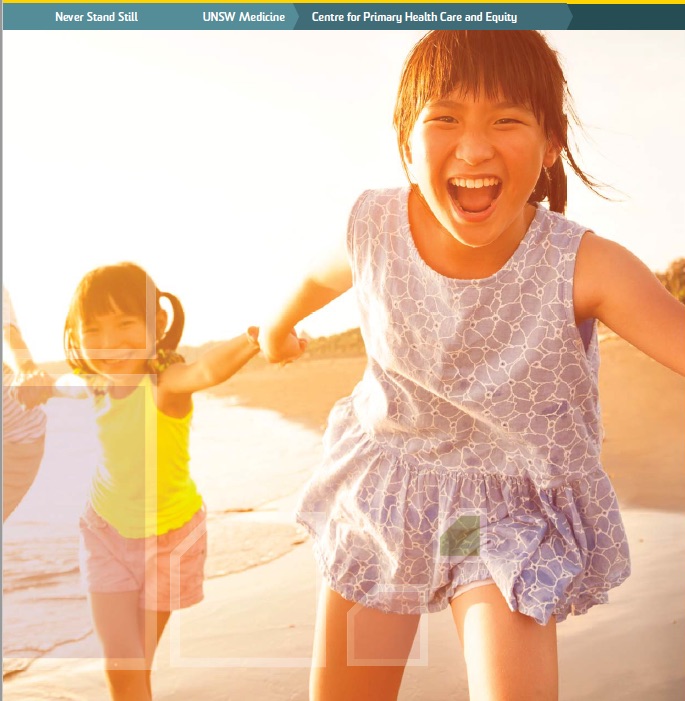 Image from annual report of Centre for Primary Health Care and Equity, UNSW

In the absence of strong Federal leadership in health reform, at least there is some good work being done at state and local levels, reports Amy Coopes in the preview below of some important health discussions this week.

With reforms to improve access and equity in health unlikely to get much prominence in Australia’s fractious new Parliament, the role of primary care and locally-driven solutions will be the focus of a forum in Sydney this week.

More than 100 delegates will come together for the annual Centre for Primary Health Care and Equity (CPHCE) symposium at UNSW on Wednesday to reflect on successes and challenges in 2015-16 in healthcare access and equity.

Cassandra Goldie, CEO of the Australian Council of Social Service, will deliver the keynote address, offering a personal insight into her journey as an advocate and reflecting on the modern social welfare landscape.

“There are now more doctors looking for more business, and those areas are not as distant as they used to be. So access has improved from that point of view,” said Findlay.

On the financial front, however, access remained a problem, he said.

“Bulk-billing rates have stayed largely the same but for some people they are paying a lot more money in co-payments than ever before, so that’s created an access issue.”

Findlay said the federal government used bulk-billing rates to support their case that health care remained accessible, with 80% of consults charged directly to Medicare without a patient excess.

But this figure distorted the actual picture because it focused on consults rather than the number people accessing bulk-billing, and did not account for so-called ‘frequent flyers’, he explained.

“That 80 percent is concentrated in a smaller group of people who are frequently accessing (bulk-billing) and are pensioners or recipients of benefits — an important group no question – but it isn’t as simple as only 20% have co-payment issues,” said Findlay

“The people who are co-paying could easily be 50 percent. All you’ve got to do is walk around and talk to people, and anyone who doesn’t go to one of these big bulk-billing practices is paying serious money — so serious that they are not going (to the doctor).”

On equity, Findlay said the picture “just gets worse”, with disparity increasing on measures including incomes and geography, where the inner city was populated with “ghettoes of the rich”, and low and middle-income earners were pushed ever-further to the fringes.

Large commutes, home ownership insecurity, income stress and overcrowding were just some of the impacts to health from these issues.

Wednesday’s forum will reflect on the year in research for CPHCE, with three headline projects to present an update.

Amy Prince from the South Western Sydney Primary Health Network will speak about the IMPACT study, a joint Canadian-Australian-New Zealand initiative looking at interventions that can improve access to primary care for vulnerable groups such as migrants and Indigenous people.

Dr Julie McDonald, director of the South Eastern Sydney Research Collaboration (SEaRCH) will present her work on integration and access, which explores whether strategies such as co-location of services can boost outcomes (spoiler alert: it’s not enough).

Completing the presentations, Associate Professor Liz Harris will reflect on the importance of community consultation and engagement in service provision and access, drawing on her work in the Sydney Local Health District’s Canterbury region.

The floor will then open for questions to a panel comprising Goldie, Anthony Brown from Health Consumers NSW and Jean-Frederic Levesque from the Bureau of Health Information.

Though it had been a big year politically, with a change of Prime Minister and a knife-edge federal election, Findlay said very little was expected from the new Government in the health equity and access space.

There was significant disappointment over the fate of the proposed Health Care Homes reforms, which were progressing slowly and becoming less and less ambitious in scope as time went on, he said.

The Mediscare campaign had also spooked the Government and made it even less likely they would pursue ambitious reforms, despite the fact that Medicare’s funding and affordability remained a significant policy challenge.

This was compounded by uncertainties around passage of legislation through the new Parliament, where the Coalition has a one-seat majority in the lower house and a conglomerate of minor parties, Labor and Greens hold the balance of power in the Senate.

A major question would be whether the new Turnbull Government allowed private health insurers to enter the primary health care space, a development Findlay said would have “serious equity issues as a consequence”.

“Whoever’s insured starts to get not only a different hospital and a different specialist service, which you do now, but imagine if you’re getting a different primary health service – a better deal for those who can afford it,” he said.

The CPHCE is closely involved in monitoring and evaluation of the PHN rollout and, in contrast to the federal picture, Findlay said collaboration with Local Health Districts and state governments had been incredibly constructive.

“In many ways they are a bigger driver of change than the Commonwealth,” he said.

“The LHDs see people coming in their doors, into their A&E, particularly the elderly and those with chronic conditions and can recognise the benefit of doing something different in primary health care. They are great allies, I see a lot of positives.”

The CPHCE forum will be held on Wednesday, August 24, at the John Niland Scientia Building at UNSW.  To follow and participate in the online debate, join us at #CPHCEforum16.

• For live-tweeting of the event on Wednesday, follow: @Coopesdetat

PrevPreviousTweet of the week…
NextWhat is the relationship between lifelong hearing loss and Indigenous incarceration? A powerful story to mark Hearing Awareness WeekNext