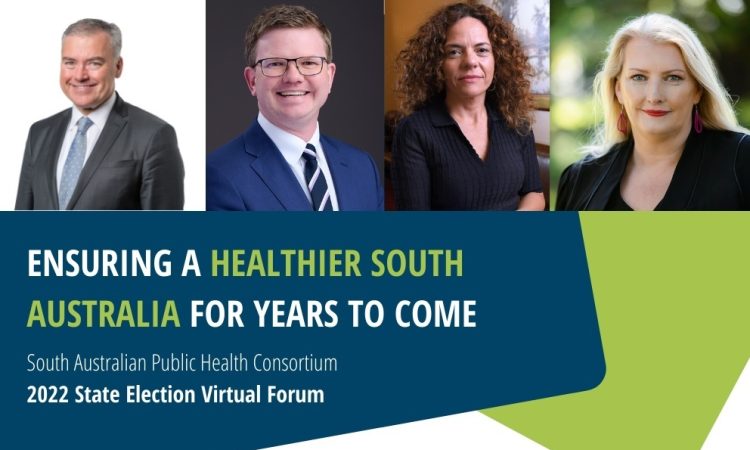 Introduction by Croakey: Attendees at a South Australian pre-election event were reminded about the value of living in a country that allows its citizens and elected members of parliament to partake in robust and democratic debate and conversations.

As the Public Health Association of Australia CEO, Associate Professor Terry Slevin, pointed out, this is “something we take for granted”, especially in light of the current conflict in Ukraine. 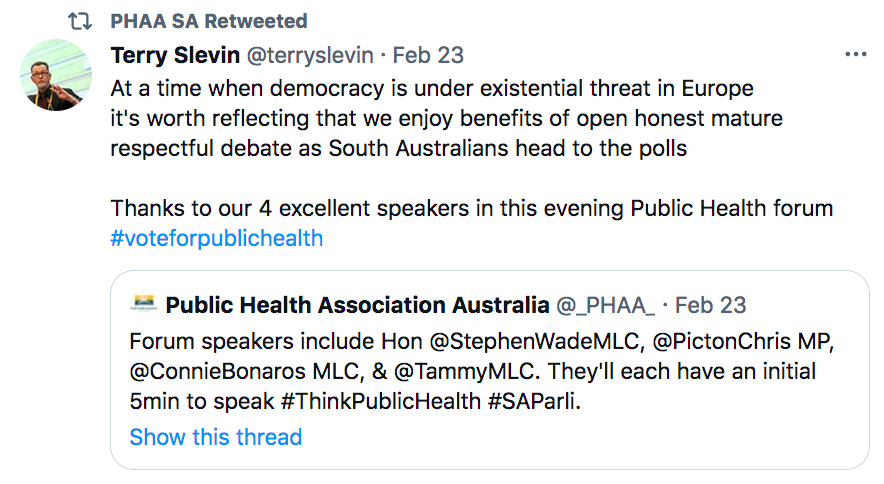 The event, hosted by the South Australian Public Health Consortium, was an opportunity for the audience to hear from four State Members of Parliament in the lead-up to the 19 March state election.

The Consortium provide a summary of the event below.

Public health is shaping up as a critical issue in the South Australian election on 19 March, with the State’s Opposition campaigning for an independent preventive health agency.

Each panellist responded to questions posed by the Consortium and audience members on public health-related issues in SA and had an opportunity to outline their commitments to improving health and wellbeing for the South Australian community.

While COVID-19 remains an ongoing concern, other issues continue to impact the population’s health and wellbeing. Chronic conditions such as cardiovascular disease, arthritis and diabetes share common risk factors, as well as key social determinants of health – such as housing, employment, and education – that contribute to preventable illness.

Focus on public health and prevention

Investment and action on the social determinants of health, such as housing, homelessness, poverty and food security, were a key focus of the Green’s representative, while SA Best focused on increased investment in tobacco control and early intervention, such as the infant reunification program.

While Minister Wade emphasised the benefits of having Wellbeing SA integrated within government, the Shadow Minister for Health Chris Picton proposed the need for an independent preventive health agency.

Picton further promoted Labor’s priorities around tobacco legislation reform, school-based mental health support, access to preschool for three-year-olds, and a reinvigoration of the intersectoral ‘Health in All Policies’ approach to improving population health.

In response to a question on building the capacity of the public health and health promotion workforce, both Labor and Liberal were quick to discuss frontline health workers, with limited emphasis on public health practitioners working in non-hospital or community-based settings.

Picton highlighted the need to work with universities to increase training for doctors, nurses and paramedics.

Minister Wade referenced the AHPA Western Australian branch scholarship program for health promotion practitioners and hinted at his interest in the scheme, before emphasising the need to work with the Royal Australasian College of Physicians to increase training opportunities.

In contrast, Bonaros focused on the limited mental health workforce and raised concerns about the ongoing ‘brain drain’ where graduates seek opportunities interstate.

Franks took a different approach by emphasising issues of workplace bullying, fatigue and stressors experienced by the workforce. In doing so, she advocated for portable long-service leave, good working conditions, stable funding, and mentoring opportunities to ensure workers are better supported.

All parties recognised the importance of reliable data on health inequities for informed decision making, although reflecting differing views as to how to best execute monitoring. Picton and Bonaros both emphasised the important role of the Health Performance Council in collecting and reporting on data, and the need for the Council to be appropriately resourced.

Minister Wade focused on data collected in the SA Population Health Survey, options for better use of existing data, and Wellbeing SA’s focus on developing a new Wellbeing Index.

Minister Wade also encouraged the Consortium to work with Wellbeing SA to improve data collection on health inequities. Picton and Franks emphasised the need for independent research and monitoring and that data be made publicly available through regular reporting.

Questions from the audience covered topics including alcohol use and tobacco control, the public health implications of decriminalising sex work, the availability of detox centres and access to psychologists and mental health support in non-metropolitan areas.

Other issues raised included the use of Health Impact Assessments in non-health sectors, the level of independence, accountability and costs associated with the establishment of Wellbeing SA, the potential for time-lags and delays in setting up a new independent preventative health agency, and the COVID response.

In response, Minister Wade reiterated the role of Wellbeing SA in supporting the early years, mental health and wellbeing, and its capacity to facilitate partnerships. Picton restated the benefits of Labor’s proposed independent preventive health agency.

While legislating minimum unit pricing of alcohol was not currently a policy position for either the Liberal or Labor party, all four panellists acknowledged the negative impacts that alcohol has across the community (including its contribution to domestic violence).

Labor committed to increased drug and alcohol rehabilitation services, and both Labor and Liberal pledged to use evidence to inform action to address the harms from alcohol.

Franks and Bonaros highlighted that decriminalising sex work needs to be understood as a public health issue for workers and their clients.

Picton highlighted Labor’s commitment to increasing mental health support in schools and reiterated that it was crucial to re-implement the ‘Health in all Policies’ approach, while Minister Wade spoke about the importance of encouraging psychologists to provide services in country areas. 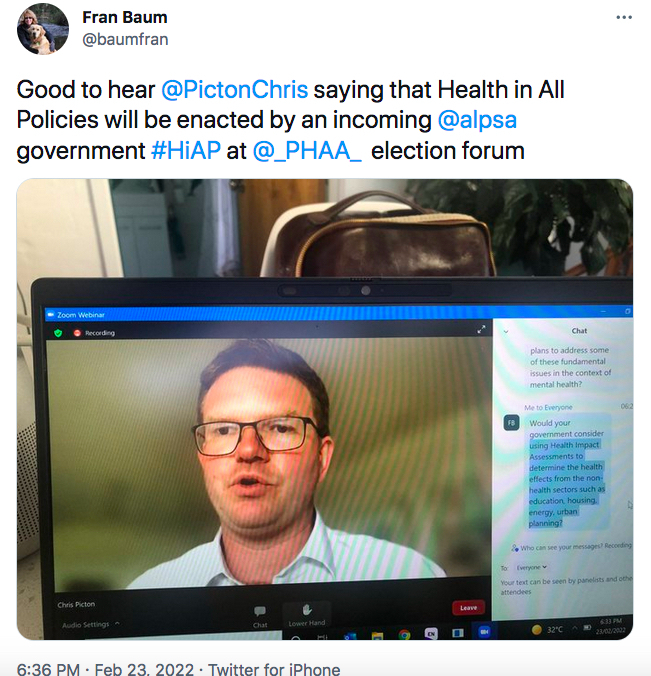 While many responses over-emphasised tertiary healthcare and ‘the number of beds’ rather than preventative public health measures, overall it was encouraging that all speakers highlighted the importance of public health in ensuring the ongoing health of the SA community.

Despite the COVID-19 pandemic being the primary focus of public health discourse over the last two years, the forum pointed towards public health strategies beyond the pandemic to set up SA for a healthier future.

While all speakers addressed the importance of enhanced public and preventative health, it is essential that these intentions are implemented as an integrated whole-of-government strategy that addresses the social determinants of health and the public health needs of all South Australians.

What can you do?

In the lead-up to the election, we encourage readers to contact their local Members of Parliament to question their commitments to public health and health promotion, beyond the COVID-19 pandemic.

We also encourage readers to share their thoughts on social media and to promote the Consortium’s priorities using the hashtags #ThinkPublicHealth and #SAParli.

For more information about our election platform and for additional resources visit the SA Public Health Consortium’s election campaign website.

Tweets from the audience 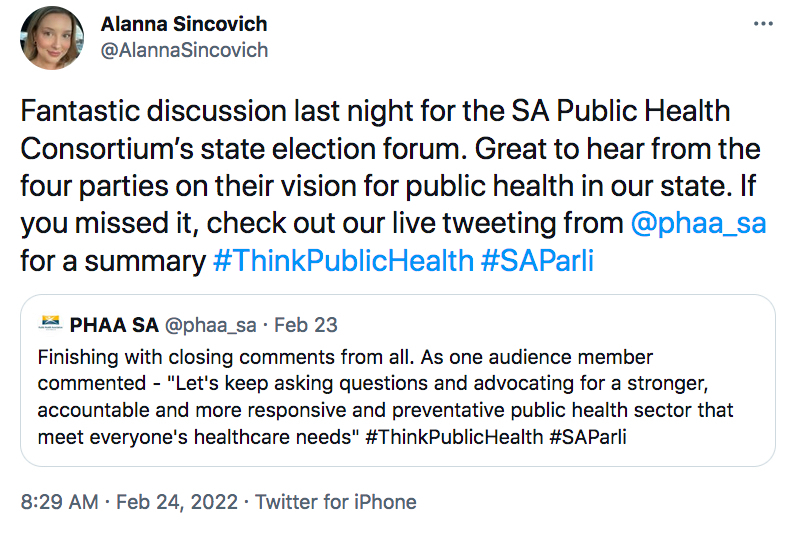 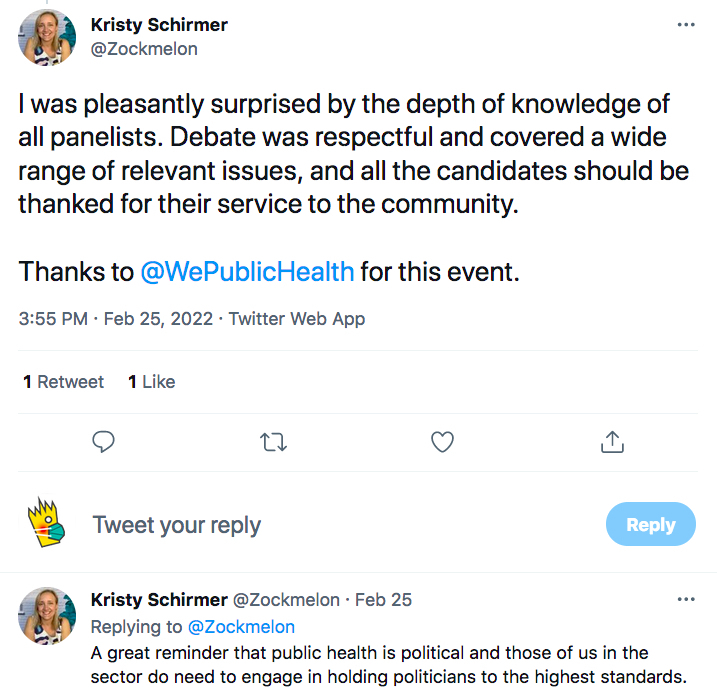 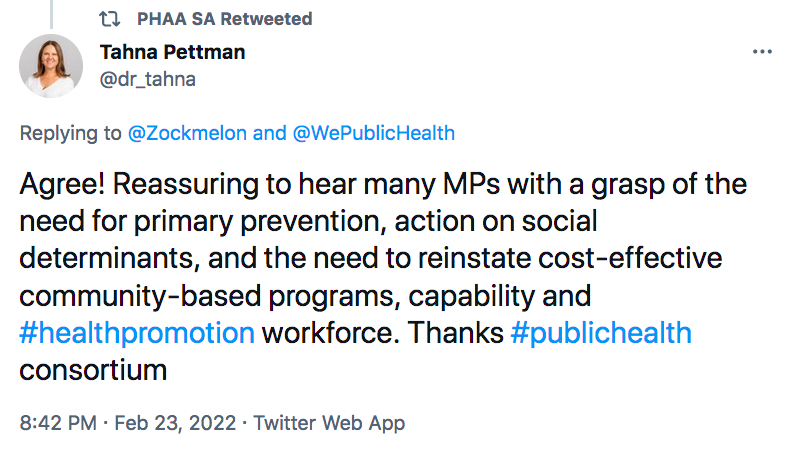 The authors are members of the core working group from the South Australian Public Health Consortium, who co-ordinated the online election forum.

An additional summary of the event has been published in InTouch Public Health Blog.

See Croakey’s archive of stories on health in all policies.

PrevPreviousThe assault on Ukraine has massive and wide-ranging health implications
NextMourning the loss, while celebrating an amazing legacy and courage “beyond compare”Next