Social media is opening up the processes of public health advocacy and efforts to hold governments to account, according to Dr Mark Lock, a Research Fellow in the School of Medicine and Public Health at the University of Newcastle.

As part of the Aboriginal Voice Integration and Diffusion or AVID Study, Dr Lock is examining collaborative efforts in public health and the role of Aboriginal voices in governance processes in public health, and is using the tools of social network analysis to visualise and analyse concepts such as participation, engagement, and collaboration.

In the article below, Dr Lock, who recently guest-tweeted for @IndigenousX, shares how social media is helping his campaign to hold governments to account for the National Aboriginal and Torres Strait Islander Nutrition Strategy and Action Plan 2000-2010 (NATSINSAP).

One of his findings so far is that the Federal Government could learn something from the states when it comes to transparency and accountability around this issue.

Once, I hand-wrote letters to politicians, unknowing as to the final destination of those letters, perhaps read or not, maybe filed or scrapped, certainly very ‘secret’ in that it was just a one-to-one transaction.

Now, the transparency and accountability of a tweet means that communication is out in the open. It is a one-to-hundreds transaction, with immediate visibility. It’s empowering.

As a citizen I have a responsibility to use the power of my voice to hold elected officials to account. And to this end I use social media to advocate for accountability in regards to the National Aboriginal and Torres Strait Islander Nutrition Strategy and Action Plan 2000-2010 (NATSINSAP).

You can see the Facebook page on the issue, where I post all correspondence. This contrasts with the first letter I wrote (as Mark Lutschini) about the NATSINSAP in 2003 which was printed and snail-mailed to relevant public officials.

For my second campaign, written in 2015, the letter was emailed not only to Ministers for Health but also to other public officials.

Now, all responses are posted online for anyone to access. Furthermore, correspondence is cross-posted on LinkedIn and Twitter. The goals are reach and diffusion and the aims are transparency and accountability.

In the email ‘promoting better food and nutrition policy for Australia’s First Peoples’ I note that poor governance, secrecy, lack of information, and ignorance of what works, are four issues for reform.

The term ‘governance’ basically refers to the way things are run. The Department of Prime Minister and Cabinet’s website points to the Australian National Audit Offices’ better practice guide ‘Public Sector Governance: Strengthening performance through good governance’ where fundamentals of good governance are noted (p. 10) such as ‘focusing on openness, transparency and integrity, engaging constructively with stakeholders and promoting accountability through clear reporting on performance and operations’. 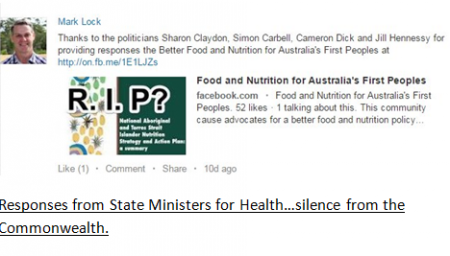 In regards to NATSINSAP, the Federal Ministers for Health, Sussan Ley and Fiona Nash, have have not provided a response.

In fact, I have to pay $315 for a Freedom of Information claim to see the review report of the NATSINSAP.

Why should a citizen have to pay more for an already publicly funded document?

There goes the principle of openness. Furthermore, the email was sent to all the very highly paid heads of government departments who are members of the Australian Health Ministers’ Advisory Council (AHMAC) and bound by the principles of the Australian Public Service which, in the 2007 publication ‘Building Better Governance’ notes (p.2) the very same principles of public sector governance re-iterated in the ANAO better practice guide, above.

No response from these public servants. It is neither good leadership nor good stewardship to hide behind an FOI.

That is why I use the word ‘secrecy’. At least the state governments provided some response (information) as to their food and nutrition activities.

The State and Territory health ministers provided responses in regards to their respective jurisdictional activities. Each response is posted on the Facebook site, and cross-posted on LinkedIn and tweeted. I posted to each Ministers’ Facebook page and also tweeted other Ministers’ responses to them.

Newcastle-based Federal MP Sharon Claydon has agreed to meet and discuss the issue. Each minister noted that the Commonwealth had jurisdiction on the issue of NATSINSAP and thus provided no State level response in that regard.

However, the NATSINSAP was a multi-jurisdictional document signed by all Ministers, so pointing the finger at the Commonwealth is an abrogation of responsibility.

Nevertheless, I now know that there is much State-based activity in regards to Food and Nutrition initiatives. What I can’t assess is how each activity is relevant to the broader strategic directions that should be taken in regards to food and nutrition policy, because the review report of NATSINSAP is secret, any information about current food and nutrition policy is not being released, and there is no national evidence gathering process to assess if current activities are relevant or not.

I still await the FOI response from the Commonwealth. In the meantime many other political issues – Tony Abbott’s leadership, budget discussions and State elections – always push achieving better food and nutrition for Australia’s First Peoples off the political and media agenda.

Nevertheless, as a citizen advocate the ‘bird is in my tweet’ (not the ball is in my court! lol)  to keep-up the campaign. 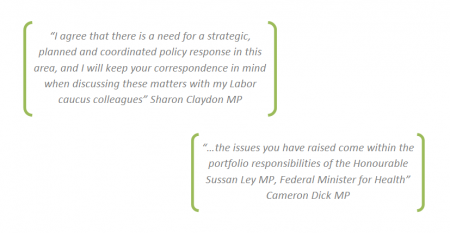