Home Global health and climate change asylum seeker and refugee health Freedom to worship: except when there’s a Q of anti-Muslim opposition

Freedom to worship: except when there’s a Q of anti-Muslim opposition 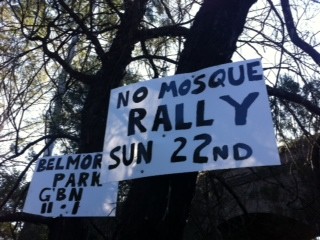 Much outrage has erupted recently in the regional Victorian city of Bendigo over a proposal to build a mosque, with a local councillor defending her decision to vote against it:

“I think it’s sad that many residents are afraid to publicly voice their concerns for fear of being labelled racists and bigots.”

She’s not been alone amongst the locals, but there’s growing attention also on the role of national and organised groups that ply fear about Islam and Muslim communities, including the Q Society which reportedly was behind a pamphlet that declared:

“A mosque is not like a church or a temple … (mosques) are a seat of government, a command centre, a court, and in some cases used as military training centres and arms depots”.

Whatever the origins and orchestration of the opposition (and as the photo above, snapped in rural New South Wales recently shows, it’s not confined to Bendigo at the moment), Professor Farida Fozdar says it’s the latest in a series of examples where Muslim Australians are seen as “alien and illegitimate members of the Australian community”.

In her post below, she points to the growing body of evidence about the impact of racism and discrimination on health and wellbeing, also explored in a recent symposium in Melbourne: Racism and the health and wellbeing of children and youth – understanding impacts, finding solutions. See Croakey’s coverage.

But, as that symposium also found in a project involving Muslim and Catholic school students, she says that interaction between different cultural groups dramatically improves attitudes.

Around a third of Australians, according to the latest Australian survey of social attitudes (AusSA) data, think that one needs to be Christian to be ‘truly Australian’.

They can be forgiven. Over the last decade or more political rhetoric has encouraged the idea that there is a fundamental link between Christianity and Australian-ness, with the implication that other religions are un-Australian. John Howard’s version of the citizenship test tied ‘Australian values’ to the Judeo-Christian tradition. Kevin Rudd said the teachings of Christ were an appropriate basis for the making of social policy.

So it is perhaps not surprising that when Muslims ask for planning permission to build a mosque in a suburban area, the neighbours get upset. Yet it is worth considering whether Buddhists or Sikhs wanting to build a temple would cause the same level of outrage.

Muslims have increasingly become subjects of suspicion and targets of everyday and institutional racism – the Q Society’s (self-described as “Australia’s leading Islam-critical movement”) latest intervention encouraging protest against the building of the mosque in Bendigo is one of the more organised attempts to promote anti-Islamic sentiment.

But there are many similar examples of other Australians seeing Muslim Australians as alien and illegitimate members of the Australian community.  While Muslims have been in Australia since before white ‘Christian’ settlement, and although they are the third largest religious group (after Christians and Buddhists), comprising 2.1 per cent of the population, they remain a very small minority against whom high levels of negativity exist.

This has exacerbated since the US Trade Tower attacks on 11 September 2001,  with news coverage depicting them as ‘evil Others’, attempts to control Muslims’ use of public space and limit transmission of their culture and conservative politicians linking Muslims to social discord and the need for stricter assimilation measures.

The effect of these attitudes on Muslims has been explored in the Human Rights and Equal Opportunities Commission report Ismah: Listen. It documents experiences of violence, discrimination and vilification of Muslims and Arabs on the street, at home, in transit, at educational institutions, at shops, at work, in the media and through government agencies, particularly since the 9/11 and Bali bombings.

The report found that while many Muslims have experienced instances of support from the wider Australian population, many have also experienced acts of racism and discrimination. Efforts to foment negativity around the building of the Bendigo mosque, including the organising of a public meeting and the distribution of anti-Islamic pamphlets, suggest there are elements in the wider population seeking to manipulate the public’s understandings of the issues.

…I think that the society in general sees … a clear distinction between being Australian and being Muslim, I think if you … survey people what it means to be Australian? I don’t think that being Muslim would be an answer.

Greg Noble has argued that Muslims in Australia are increasingly experiencing a sense of ‘discomfort’ or ‘ontological insecurity’. He links this to a lack of recognition of Muslims in public spaces, such as mosques, and a feeling of illegitimacy in their desire to make Australia ‘home’.

Apart from feeling that they don’t belong, what are the potential health effects of discrimination such as this?

A review by Yin Paradies and others of 138 empirical quantitative research reports found self-reported racism is related to negative health outcomes. Indeed, racism has been shown to have health effects on asthma, cardiovascular diseases, blood pressure, smoking, cholesterol, BMI, mental health, poor physical functioning and poor health more generally. And of course discrimination has impacts on other aspects of life that also affect health, including employment, housing and poverty.

Research on migrants’ understandings of the causes of depression among their communities in Australia suggests that racism is a major cause. Rather than experiences of trauma in the migration process, something one might think would be very important for those from refugee backgrounds, for example, migrants report that their experiences of exclusion in Australia are what causes them depression and anxiety.

Yet most Australians are positive about diversity and do not have a problem with Muslims; Halim Rane reports that 78 per cent of a sample of Queensland telephone survey respondents said they were comfortable with Muslims in Australia – most because they do not consider Muslims any different from others who wish to live in Australia – and 67 percent do not consider Australian Muslims a threat to the country.

Regarding cultural visibility and inclusion, Kevin Dunn, reporting results of an Australia-wide phone survey, found that 81 per cent of Australians said they were not concerned by Muslim women wearing headscarves in Australia. Indeed, the Isma report, while outlining many instances of racism, also provides qualitative responses from Muslims who feel supported and included by mainstream Australians.

A study by Issues Deliberation Australia found that spending time discussing concerns about Muslims in groups with informed participants reduced negativity. Thus while prior to deliberations about a third of the representative Australians wanted to see decreased intakes of Middle Eastern (30 per cent) and Muslim (32 per cent) immigrants, this declined significantly after deliberations (21 per cent and 20 per cent respectively).

They were also substantially more likely to welcome and respect people from different cultures and accept their freedom to live by their own traditions within the Australian mainstream society (42 per cent agreed with this before the deliberation, 71 per cent after).

Perceived negative impact of Muslims on Australia’s social harmony and national security also decreased (from 42 per cent to 29 per cent, and 44 per cent to 23 per cent respectively). Changes in opinion were more dramatic if there was a Muslim Australian in the group; for example, before the discussion around 45 per cent felt that Muslim immigrants were a threat to national security, afterwards only 17 per cent of those who interacted with Muslims in their small groups felt this, whereas 30 per cent of those who did not have Muslims in their groups continued to hold this view.

So negativity is not a majority view, and it can be changed with mixing and education.

The Australian Human Rights Commission’s Racism: it stops with me campaign is one example of the ways in which the majority of Australians who want to support social inclusion can take a stand against racism.

The Race Discrimination Commissioner is also actively arguing against the repeal of section 18C of the Racial Discrimination Act, saying that in a multicultural society such as Australia’s, our laws should say something about racial tolerance (see)

Perhaps the Q Society would benefit from having some Muslims as neighbours.

Farida Fozdar is Professor of Anthropology and Sociology at the University of Western Australia.